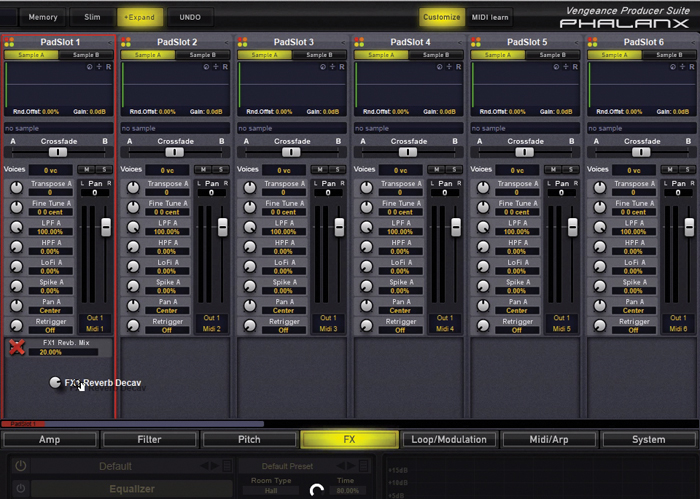 Does the world need another virtual sampler? Liam O’Mullane spends time with this new offering to find out in this review of Vengenace Sounds’ Phalanx 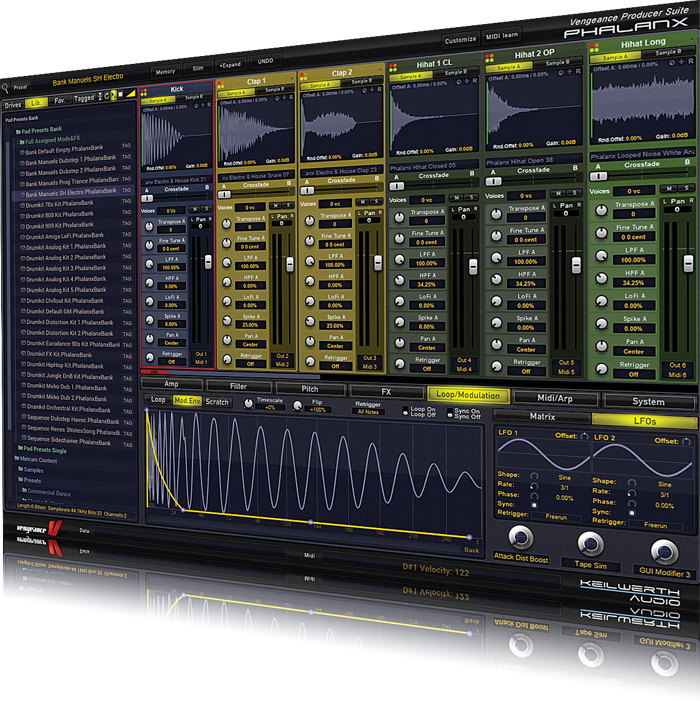 Software samplers can be divided into two varieties. Traditional samplers generally alter sounds through pitch, amp and filter manipulation, while velocity-based layering of samples and sounds are other features, but, in general, these samplers imitate the features of the classic hardware sampler. These are the features included in the majority of software samplers and drum machines today, and if your DAW includes a sampler, it will be of this variety.

The other variety is of a more contemporary nature. Adding to the core feature list already mentioned, they also offer other creative tools, like real-time time-stretching, built-in effects processing and so on. The big three products in this category are Kontakt, MachFive and HALion. Of them all, Kontakt is the best known due to its great feature set and support from third-party developers that choose to use the format for their products.

Phalanx falls somewhere between the two as it isn’t going head-to-head with Kontakt in terms of features. Instead, Vengeance Sound has continued its existing approach to plug-in production and built a product that’s specifically tailored to the needs of the electronic music producer.

In Focus
Vengeance has already gained a high profile from creating numerous sample libraries that regularly get mentioned by some of the biggest names in the production game. It’s therefore no surprise that Phalanx comes with an excellent supply of samples and presets. The Premium package includes 6,000 samples; the Basic package, 3,000. The choice of sound categories and so on doesn’t vary, you just get twice the range. The libraries cover drums, bass, synths, vocals and effects, and many of the drums have sub-categories such as dubstep, trance, electro and house, so most popular genres are catered for. Synth sounds, basses, effects and so on are simply categorised by what they are, with vocals being the most diverse (including choirs, words and phrases, screams, effects, chopped sounds and plenty more).

Phalanx’s browser has a nice tagging feature which enables you to flag samples of interest as you work, so you could be searching for the best clap for your current song and tag a handful of potential candidates. The Tagged window lets you re-audition your choices before committing.

Phalanx Power
Once installed, the Phalanx plug-in can be used in two different ways: as a regular multi-sample affair with 16 pad slots, or as a single version with only one pad. This allows you to determine how you want to work – for instance, you may prefer to use a single instance for each instrument-like patch, and use the multi for single-note triggering of samples (drums, perhaps). A single multi instance can host an instrument across one or more pads, give them a dedicated MIDI channel and still allow you to trigger other pads in single-note fashion as well. The choice is yours.

Outputs are also configurable, so you can go from running everything through a stereo output to giving each pad its own stereo output. Because Phalanx includes a good range of onboard effects, we rarely found the need to run pads out separately, but it’s good to have the option.

Each pad can contain two sample layers, referred to as A and B. A crossfader lets you strike the perfect balance between the two and each layer gets its own set of controls as you travel down the pad’s column. The layers have rudimentary controls (pan and gain), but Phase is also included, which lets you flip 180 degrees for the best correlation between the two.

Phase is one of our go-to tools when layering sounds, and the inclusion of this feature is another step towards a faster workflow. A random offset for the start position can also be set if you want subtle or drastic variations as you trigger a pad. Pads can also become sawtooth oscillators, and if you own Vengeance Sound’s Metrum drum tool, this can be used as a sound source. We tested various samples at the extremities of higher pitches and found the anti-aliasing option to be very good, though it isn’t enabled by default.

Loop, Mod and Scratch
Sample looping is the same as you’d expect from any decent sampler, with various looping modes and moveable edit points for creative use. The internal modulation is down to a mod envelope (though amp and filter envelopes can be used too) and two LFOs per pad. A simple modulation matrix allows you to assign these to almost everything, as well as external MIDI data and DAW automation. Phalanx also has three dedicated modifier controls that can be used as macro dials for simple control of multiple parameters at once.

A scratch effect is also available, which gives you some great movement effects. Either imitated using the pitch dial or a dedicated envelope, you can move forwards or backwards through a sound and mimic a variety of scratches. The only thing that prevents this feature from being complete is crossfader integration, as many scratch effects involve rhythmic muting as well. This can be imitated in a variety of ways by the user, but it would be nice for it to be part of the same section

Throughout our tests, Phalanx proved to be an intuitive and enjoyable sampler to use. Its lack of time-stretch can be worked around by moving a loop point forward or backwards for a classic cyclic-style stretch, but nothing more. It’s certainly a focused sampler and will be perfect for some but not for others, so it’s worthy of a demo to see if it suits. In our case, though, it offered a different approach to sampling and the best workflow we’ve experienced in a while, so it will be staying on our plug-in list for electronic production for a good while to come.

Vengeance Sound’s Phalanx brings something new to the sampler table and promises to be a serious contender for electronic music production.