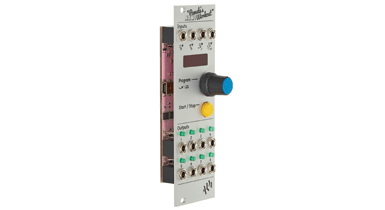 ALM Busy Circuits introduces the much-anticipated successor to Pamela’s Workout – but will it be showing off all-new moves, or rehashing the same old routine? Dave Gale limbers up to find out… 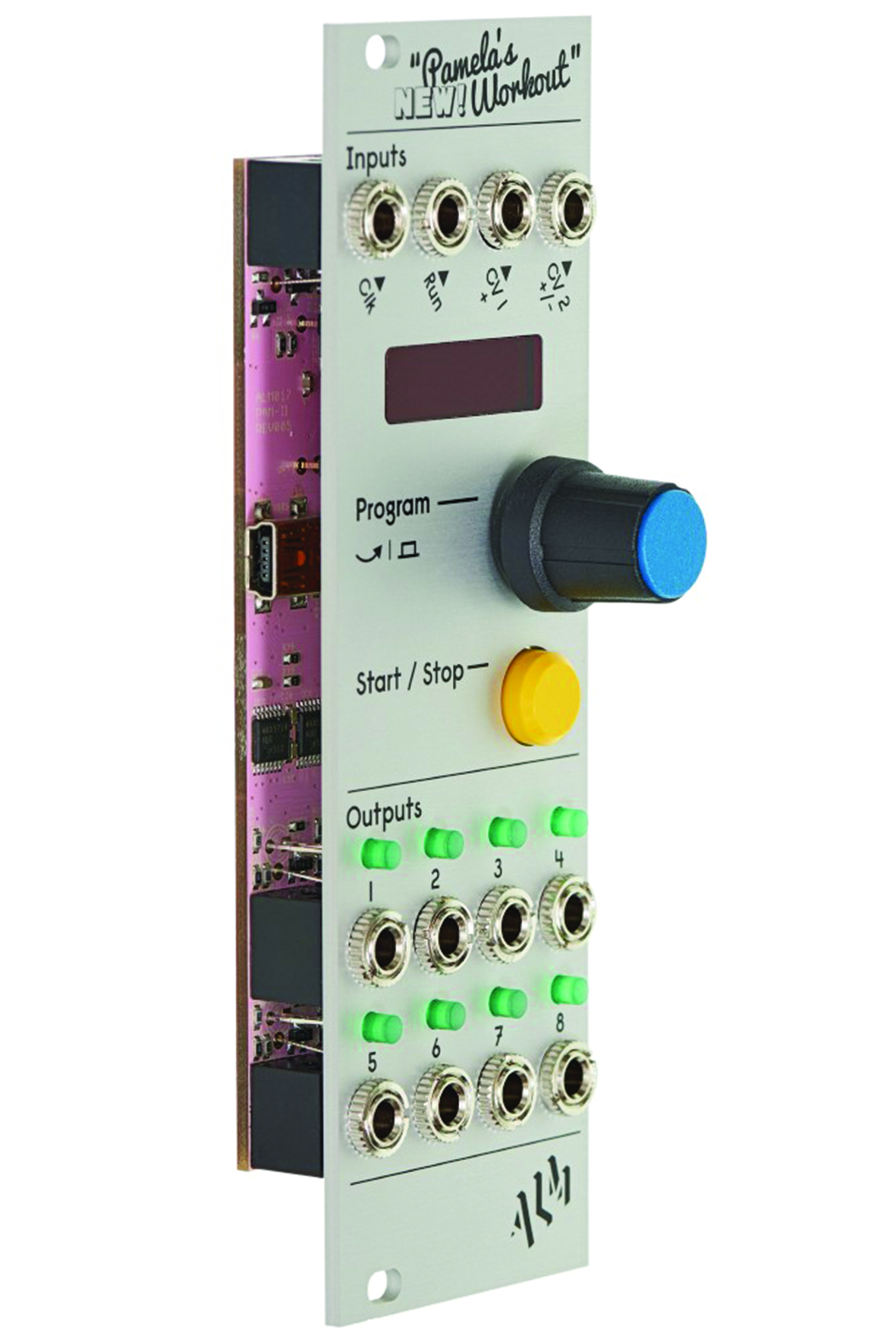 Clocks are one of the absolute foundations of modular, and for many, form the starting point of the music they make. Anything with something approaching a groove in a modular is likely to have a module in the system that’s generating ‘that’ starting pulse, to which everything else slaves. And therein lies the beating heart of Pamela’s New Workout.

As with all ALM modules, Matthew Allum (the creative guru behind the company) closely guards the module names, but in the illustrations to be found in some of the documentation, Pamela can only be described as a cross between a Baywatch superstar and a mermaid! Pure conjecture on my part, but regardless, this new clock-based treat is incredibly flexible in its purpose and design.

This is a major upgrade to the older Pamela’s Workout, and this can be seen from the outset with the addition of a new OLED display in place of the previous, more basic, offering. It’s now possible to see exactly what you’re doing, with very clear and legible writing on screen. Some of the text is quite small, but thanks to the clarity of resolution, is still very easy to read.

In essence, PNW offers the user eight assignable outputs, which can be used to send triggers and CVs to any device you might desire. These eight outputs can also be multiplied or divided against the onboard clock, meaning that, for example, you could generate a basic drum pattern with 1/4 notes for a bass drum, and the same 1/4 notes multiplied by two, to create a basic snare pattern.

The phase of each output can be altered, to allow offsetting – so your snare which will appear on beats 1&3 can easily be moved to beats 2&4 using this parameter. The logical extension of this idea is to go further with a divided hi-hat pattern; and so the patch could continue, but it’s also possible to introduce elements of randomness, thanks to parameters such as Slop.

In this instance, the Slop setting introduces a random element into proceedings, which equates to something similar to Humanise. The level of humanisation can be adjusted, as can all parameters that are available, within each output.

Apart from triggers, PNW is also equipped to send other useful output types, such as Triangle and Sine waves, basic AD envelope shapes and random waveforms. So it can be regarded as something akin to an LFO generator, with Sample & Hold, and the option to send an envelope phase, too. These CVs are sent on the usual 0-5v scale, with adjustments available at source. And in all cases, it’s possible to bring a number of additional parameters into play.

We’ve already mentioned the phase control, but alongside this, we also have parameters such as Delay which enable the user to dictate the amount of delay applied before the cycle begins. If you also add into this the clock multiple/divide options, you can see how this could be used as a very comprehensive LFO; or even triggering an envelope shape, which might fire in time with a sequence to induce a specific modulating effect, such as Pulse Width Modulation or pitch of a sync’d oscillator.

Moreover, this could happen over a number of bars, thanks to the clock multiplication function. It’s pretty comprehensive – so much so, it did take me a little while to examine all options. It would be very easy to just get lost in triggering drums, especially if you’re drawn to the flashing lights, which do so in time with the clock. It’s far more capable than that, of course, and I was soon modulating wave shapes and all sorts, via envelopes and LFOs.

In my view, the big selling point for this module is the possibility to expand it – with two newly available modules that are sister products to the main PNW. The Pexp-1 expander offers some very useful divided and multiplied gates, which are immediately available to the user from dedicated patch points, but also on offer are outputs for MIDI Clock and DIN Sync.

Both are very useful indeed, while the DIN Sync output is perfect for older Roland devices, such as the TB-303 and TR-606. In my case, I had my 606 chasing PNW with astonishing accuracy, which allowed a programmed flavour to intertwine with the minimal four to the floor kick-drum pattern that Pam could offer.

The second expander, Pexp-2 is a slightly simpler affair, offering a 24-ppqn clock output, as well as a MIDI clock output, but this time on a 3.5mm jack. It also serves the useful purpose of allowing easy sync’ing to a second Pam, should you require it.

All navigation is done through the program pot, which can be turned, pushed and held. In all cases, doing so will move you forward or backwards through the menu structure, or allow for easy scrolling or incremental control of parameters. It takes a little getting used to, but the huge boon here is without a doubt the clarity of the screen – which makes it very easy to see exactly what you are working with, as the output is clearly described on the display at the parameter level.

Once or twice, I did find myself dealing with a needle in a haystack, as I tried to understand why an output was exhibiting certain behaviour, but thanks to the Reset function, at the individual output level, it was simple to reset and start again, which is actually easier than scrolling through the steps manually. 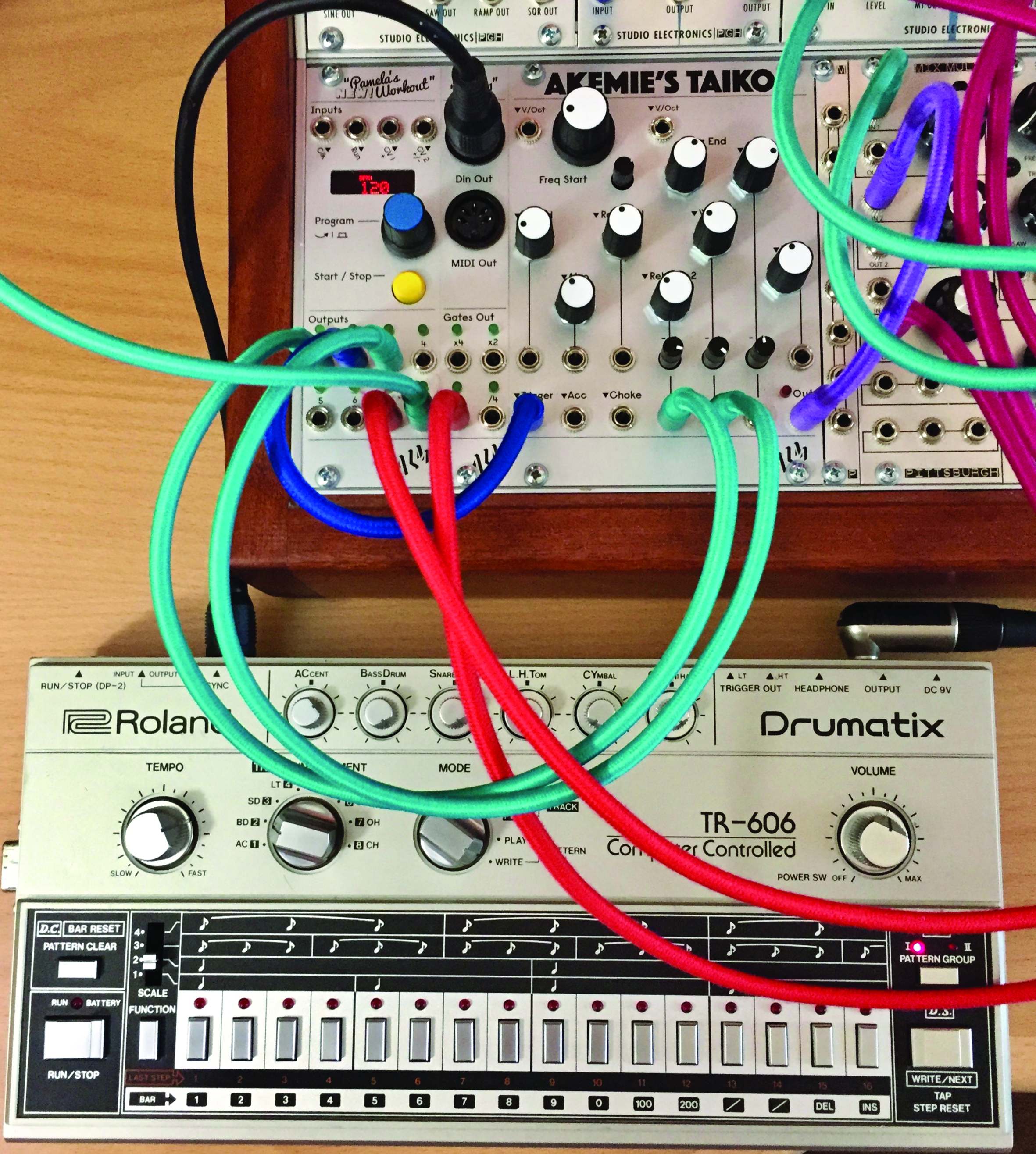 I found myself building up a basic groove, and then sending additional outputs types to another of ALM’s modules, the Akemie’s Taiko – a module that benefits hugely from modulation when in play. The mixture of random elements coupled with more uniform options like the clockable LFO made for something that could be as random as you like, but can also be placed under very heavy control, if so desired. Taking the random and semi-random notions further, it’s possible to assign a Sample & Hold random LFO, which can of course be clocked, making it especially useful.

But one area of particular interest to many, will be the rather comprehensive Euclidean operations. By specifying a number of parameters, it’s possible to dictate certain rules for the generation of a looped Euclidean pattern. These include basics like the pattern length, to number of hits and degree to pattern rotation, so if you have a penchant for minimal patterns that can generate and move around, this will be very useful.

Unlike other random devices, such as the Turing Machine, it feels like you have more control, and this might make it more usable as a result.

There’s also the ability to save individual output settings: if you know what you like, it’ll be easy to place these in non-volatile memory; although recalling while the module is in play mode can induce the odd timing error.

There is no doubt that within the confines of a frankly ludicrously small 8HP, Pam’s New Workout offers an amazing amount of versatility, and actually, given the amount you get, represents pretty good value for money, too.

There’s a lack of good clock-based LFOs in the marketplace, and on this level alone, it offers a good solution. I like the fact that this can be placed right at the front of your signal chain, and act as a master clock, and the fact it’s equipped with a Start/Stop button makes it very appealing, while also being under CV control if so desired. It can be your clock master or your clock slave, and when hooked in with the additional expanders, offers a very useful resource for getting clocks in and out, to the outside world.

It is a little fiddly: I found myself pressing and scrolling incorrectly a few times, but this is probably largely due to my lack of overall experience with PNW, and with time, this will doubtless become more familiar. Overall, there’s a sense that ALM has talked to users to understand what they want in this design, and the results shine through in the available programmability. It’s small, packs a punch and is very flexible… I think I’ve become a Pam Fan again.

The most obvious alternative to Pam’s New Workout is the ADE-32 Octocontroller from Abstract Data (reviewed in MT164). This offers a very similar set of output options, but the obvious difference is the way that parameters are selected and assigned. The ADE-32 is an equally good module, but in my review, I did struggle to read the legends, largely due to my ailing eyesight.

This is where the PNW scores considerably, with its crystal-clear OLED screen. The good news is both modules score high in all areas – most importantly in the timing area, where they are both very tight indeed. PNW also offers the additional flexibility of expanders, which may well appeal to some with additional outboard equipment.