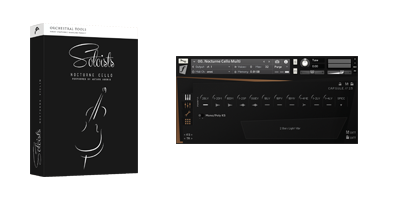 Is the Nocturne Cello, the latest instrument in the highly rated Orchestral Tools Soloist Series, as sweet as its name implies? Keith Gemmell plays into the night… 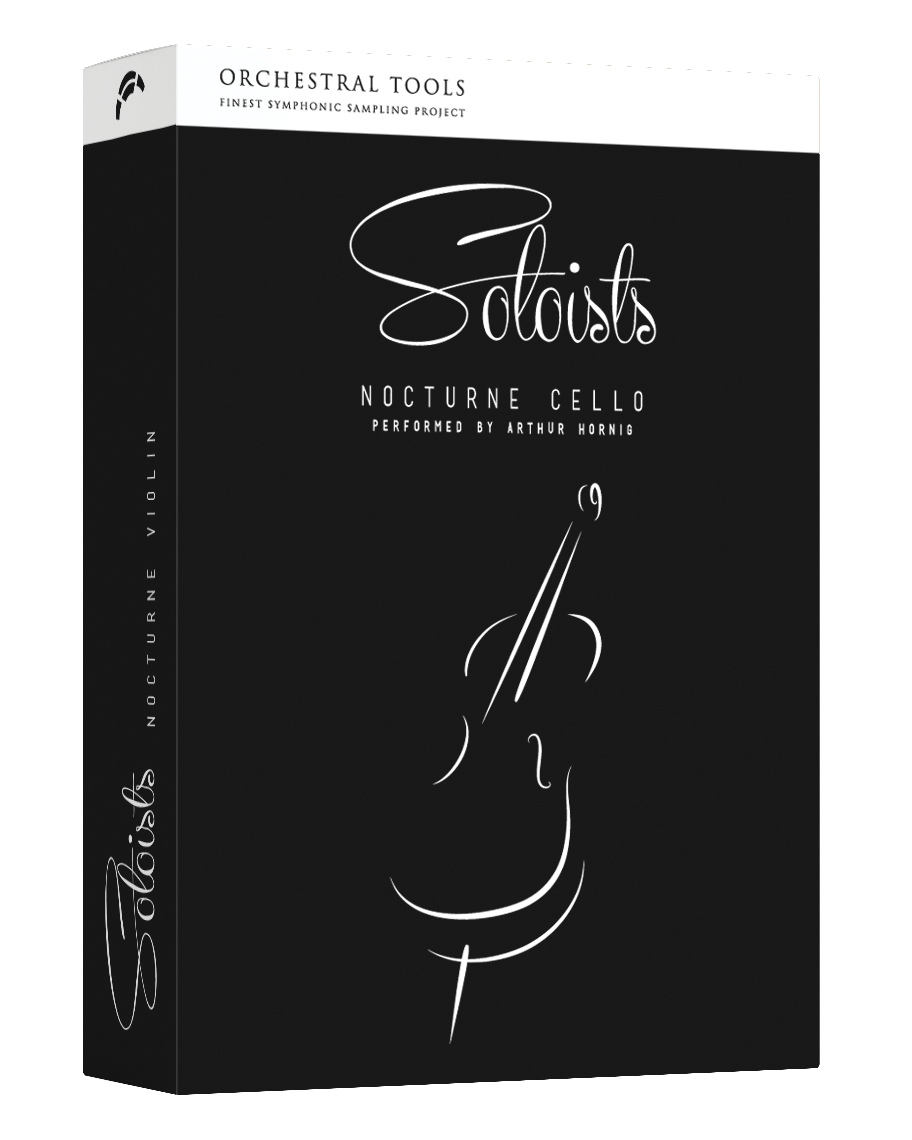 Recorded at the famous Teldex Studio in Berlin, the Nocturne Cello is the second instrument in the Orchestral Tools’ new Soloists Series. With the focus firmly on expression, tone and realism, the performer was captured in the solo booth, as opposed to the main studio, for a more intimate, direct sound –enabling you to place the instrument in a solo context in front of the orchestra.

The instrument appears in CAPSULE, Orchestral Tools’ own articulation- management system, which in turn runs in Kontakt 5.5.1+ (the free Kontakt Player is not supported). At around 2.7GB, it’s not a hefty download, but for peace of mind, it can be supplied on a backup SSD for an extra charge.

The Nocturne Cello doesn’t have a user guide, as such. However, there is one for CAPSULE (Control And Performance Symphonic Utility Engine) that serves as a ‘catch all’ for all the Orchestral Tools instruments that utilise its scripting technology.

The guide is updated each time a new collection is released and contains only specific information for that product.

Upon opening CAPSULE, you’re greeted with several patches containing sustains and legatos of varying lengths, from quarter-bars to two bars. This is a very cool feature, particularly for faster passages where shorter notes are required (just select the quarter-note lengths). They all fade beautifully at whatever length, which saves editing time, especially on the longer notes.

Tremolo, marcato, staccato, spiccato, pizzicato and trills are also represented. There’s also a Multi with 12 slots, which can be configured how you like. All the articulations can be accessed at once in the Multi view complete with keyswitches for recording onto a single track.

Most of the sustain patches have several vibrato levels: for example, romantic, progressive, without vibrato and strong vibrato. All can be assigned continuous controllers. For quieter passages, a realistic simulated con sordino can also be switched on and off.

Orchestral Tools is rightly very proud of its Adaptive Legato system, which ensures playability at all tempos. CAPSULE chooses the correct legato interval depending on the speed you play. It’s completely automatic and you can see which style is currently being used as you play, either slurred legato, agile legato or fast runs. You can also fix the style, if you wish.

There’s a second TM folder (for time stretching) and a mixer page, which has two microphone positions and reverberation; a settings page for dynamics controls and round-robin selections, plus a controller-table page for CC assignment and controller curve manipulation.

As mentioned above, the Nocturne Cello was recorded in the Teldex Solo Booth, to enable the instrument to shine upfront of an orchestra. However, there may be times when you might want to place the instrument into the large Teldex Scoring Stage. To that end, in the mixer there are Teldex IR controls – dry, pre-delay and wet. The default values are fine, but there’s also room for experimentation if you wish.

Recorded at its Silent Stage, VSL’s Solo Cello is a fine library and the standard collection contains enough articulations for basic solo compositions. Add the extended collection and you will have enough of an arsenal for all but the most esoteric offerings. With an impressive array of articulations, playing techniques and a pure sound, Emotional Cello from Best Service is rated highly for anything from film-score work to modern avant-garde cello productions.

Do you really need this?

Violin and cello are the most commonly used orchestral instruments in a solo context and of the two, the cello is maybe the easiest to play expressively in a virtual context. Whether you need a virtual cello of this calibre depends largely on how much use it will get. For the odd solo spot, many orchestral sample libraries include a basic solo cello which will usually suffice. But for extended solos or specially written solo pieces, the Nocturne Cello is the perfect choice.

In Multi Articulation Patches, the Performance View is where you load and customise individual articulations, set your control preferences and switch between the selected articulations.

The recorded samples for the Nocturne Cello were performed by Arthur Hornig, principal cellist with the Deutsche Oper Berlin. He has won countless national competitions, plays as a soloist with the top German orchestras such as the Radio Symphony Orchestra in Berlin, the Beethoven Orchestra in Bonn and many others. He also performs regularly with Trio NeuKlang, playing classical repertoire, contemporary music and crossover programmes. 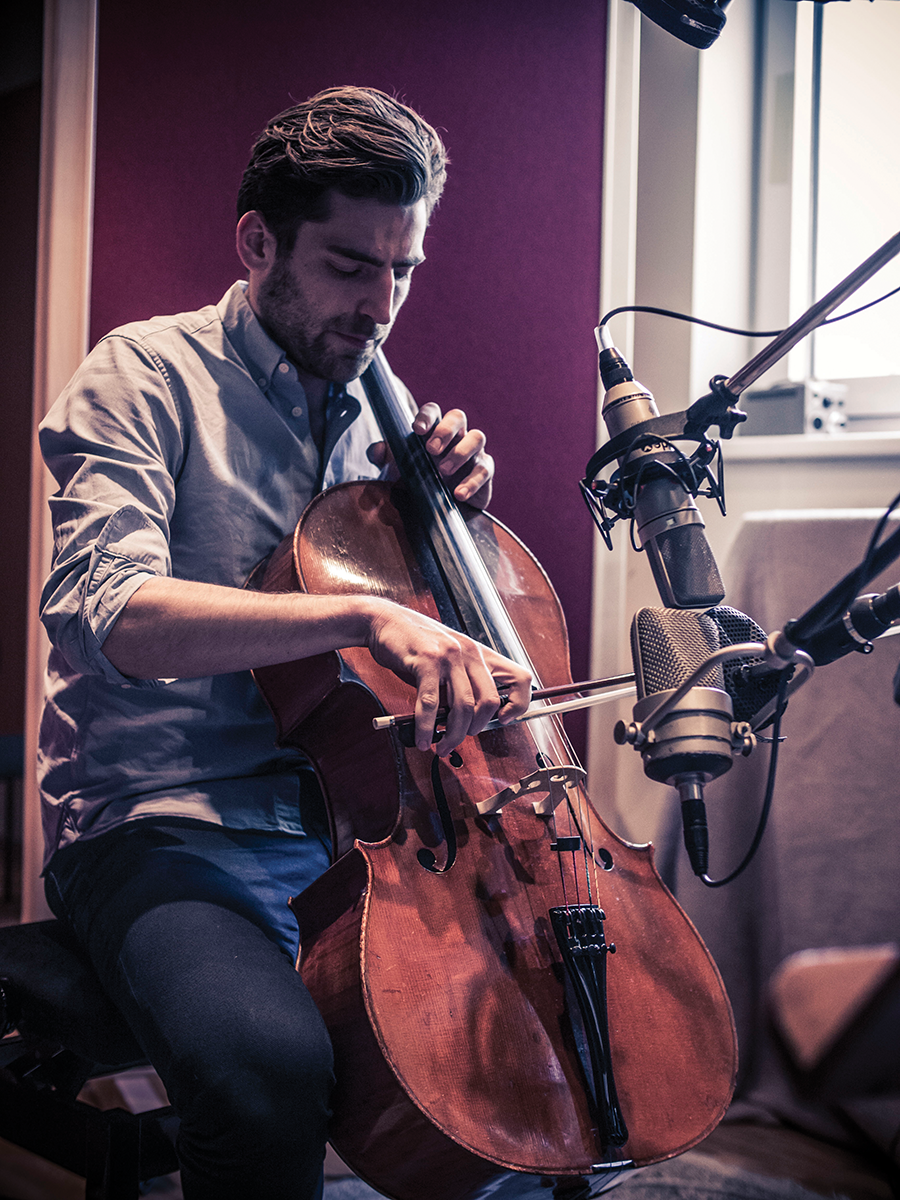 Leaving the technical details behind, how does it perform? Very well, actually. The Nocturne Cello has an extended version of Orchestral Tools’ adaptive legato system and playing the instrument is remarkably fluid at all tempos, from slow, romantic, expressive lines to blisteringly fast runs.

Also, we particularly liked the implementation of a single velocity layer for all the legato articulations, which we found makes for a very smooth and expressive playing experience – although it could be a touch more aggressive for our liking. Apparently, it also reduces any phasing effects that might interfere with the instrument’s intimate sound.

When playing shorts, like staccato, the velocity sensitivity is truly excellent and trills can be performed up to a fifth without any involvement of artificial transitions, just real recordings. The instrument also has an incredibly high range, taking you well up into violin territory for a virtuoso performance.

Since its inception, Orchestral Tools has steadily developed an impressive range of products in a thorough and innovative fashion, avoiding any temptation, in the fashion of some other companies, to output an endless string of incomplete instruments with missing articulations and future promises. Perhaps its nearest rival in this respect is the Vienna Symphonic Library, another company with a well-earned reputation for producing reliable products.

This attention to detail has been carried through to the Nocturne Cello, which is a near-perfect representation of the virtual cello with a beautiful tone, that’s very fluid and easy to play. That said, however, a degree of editing will usually be necessary after the event, but then that’s par for the course with all complex virtual instruments – a virtual necessity, if you will.

There are several solo cellos around at the moment, as mentioned in our Alternatives boxout on page 93, but if you’re on the lookout for a solo cello VI which oozes expression and is easy to get to grips with, the Nocturne Cello is well worth your consideration. 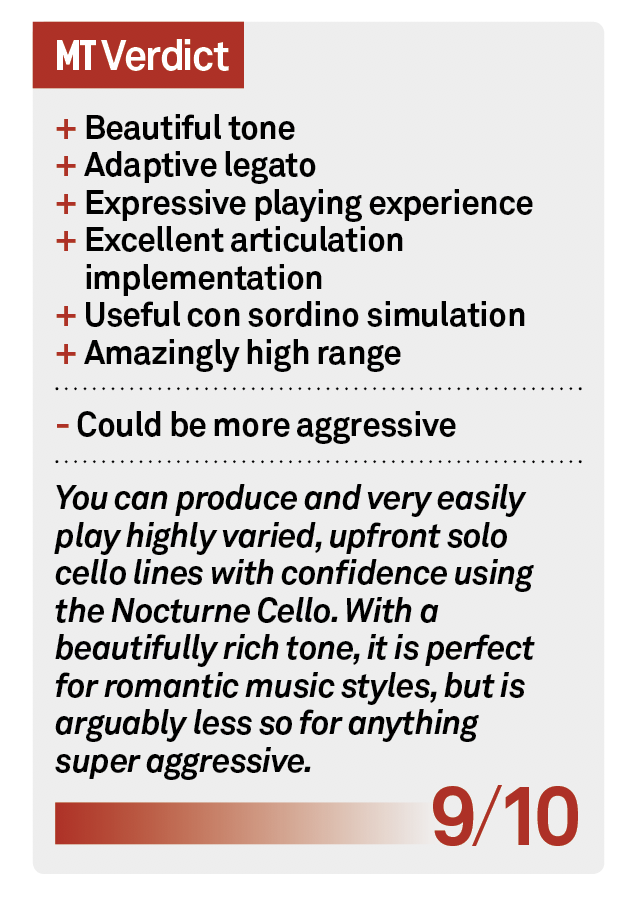