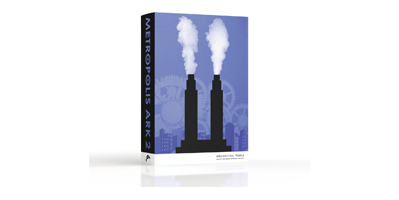 Orchestral Tools follows up its exceptional Metropolis Ark 1 library by spiriting us off to an altogether darker place. Dave Gale descends to the realm of the Nibelung to examine its epic depths…

German-based company Orchestral Tools has managed to establish an excellent reputation within a short space of time with its ever-expanding libraries of predominantly orchestral flavours, but having covered the main symphonic bases, the company took the decision about 18 months ago to release Metropolis Ark 1. This stunning library, which is loud and epic in nature, is now followed by Metropolis Ark 2 –  something completely different.

Metropolis Ark 2 is billed as offering ‘low dynamic epicness’, and in keeping with its beautifully Germanic roots, offers a palette with far more than simply pure Wagnerian dark sonority, thanks to some really useful and interesting inclusions.

Helpfully layered into usable sections, the 21 instrumentation assignments are allotted to ‘Districts’, in some post apocalyptic, Hunger Games-esque categorisation, beginning with District One – which offers the main orchestral samples, drawn from strings, wind and brass. Starting with the strings, these are organised into High, Mid and Low assignments, so starting with a High patch, I was immediately treated to a level of legato assignment which, frankly, is a bit special.

Now, this effect is always a difficult thing to achieve, as the movement from one note to the next has to be treated carefully, especially when trying to take the specifics of the original instrument into context – and what we have here is something which is, by design, a leisurely movement from one registration to the next. This library is about sonority and darkness, not epic volume, so you wouldn’t expect the legato movement to be too fast: rather, just on the back of the time, to make it sound realistic.

In context, this can almost be a little too on the back of the time, so some helpful thought in the programming here will assist. But this shouldn’t detract from the quality, which is purely outstanding. Not surprisingly, this level of excellence is continued through the Mid and Low strings, but if leisurely legato is not the order of the day, there are plenty of other choices.

Patch assignment can be made by singular articulation, or with my favoured option of key-switch based patch, where all is on offer. Here, we’re talking about sustained polyphonic patches, swells, tremolos and some really interesting harmonic-based notes and glissandi; all an absolute gem for any soundtrack composer. 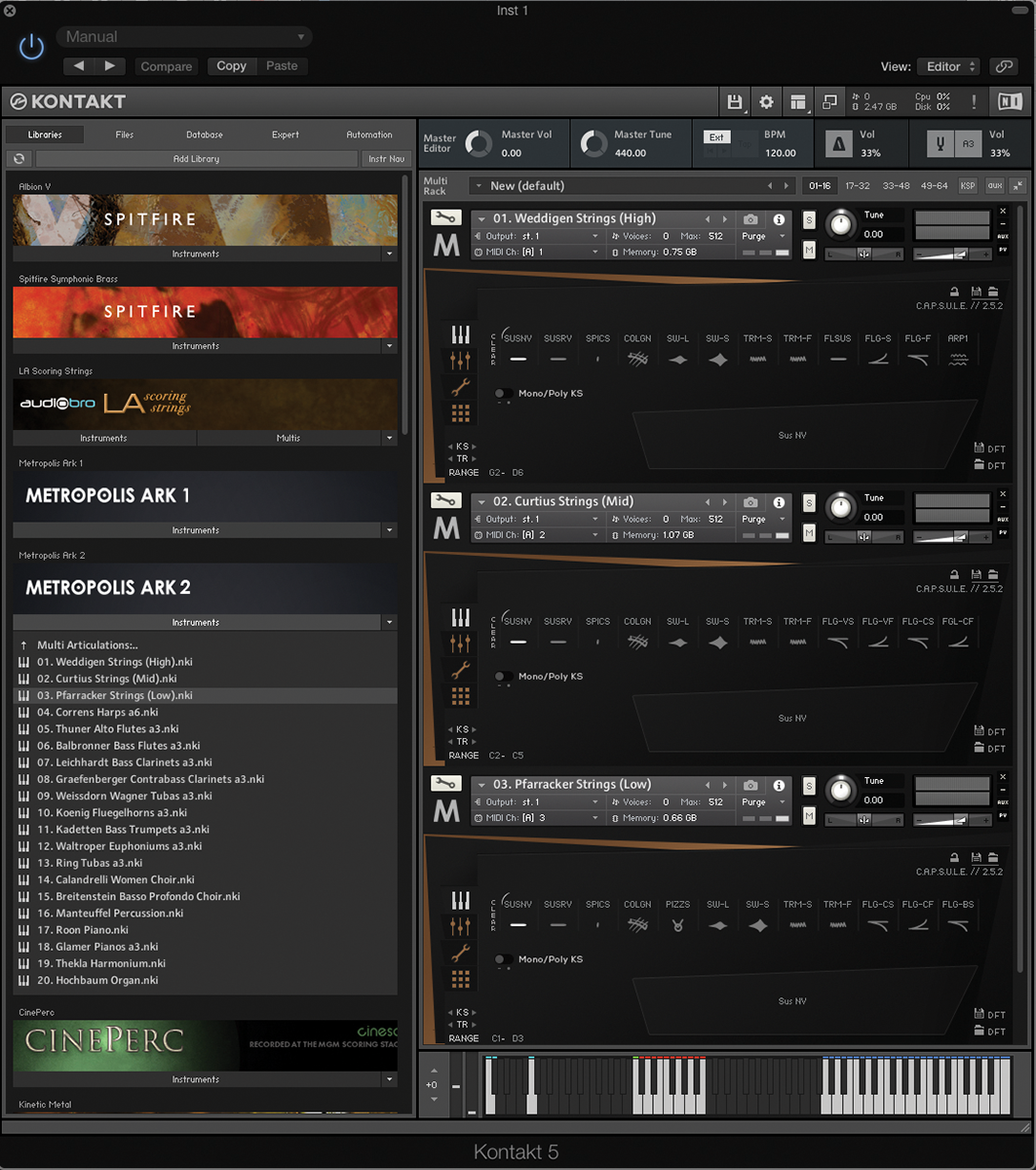 The Mid string section scans down to a C below middle C, placing it at the bottom end of the viola register, presumably with some second-violin content in the upper range. Low patches essentially play in octaves, dropping to the depths of the lowest note on the cello, with the basses accommodating an octave lower, clearly with double-bass extensions – expected in a library such as this, but highly effective nonetheless.

In practice, I found that many of the patches took a while to speak, which keeps them in line with their slightly sub-dynamic roots. It’s highly musical, but I can imagine that the continued suggestion of lag might mean that a little nudging would be required within the DAW in order to get things to sit properly within some tracks.

Moving away from the strings, there is a sense that Orchestral Tools raided its local instrument-hire facilities in order to provide some more obscure low-end orchestral instruments for Metropolis Ark 2. We have such wonders as bass flutes and contrabass clarinets, instruments which don’t appear very often (except in the film score world), so it’s great to hear them getting an outing here, and in an ensemble form, which throws open all sorts of wonders of overtone. Having three players at a time is a real coup here, but they also reside alongside some more obvious instrumental forms, in the shape of alto flutes, bass clarinets and tubas.

While we’ve moved over to the brass side, we have some more oddities here. The Wagnerian tuba puts in an appearance, alongside the euphonium, both offering some mellow timbral interest which isn’t heard very often.

It’s a little-known fact that the theme from Jaws was originally played on a euphonium, which is about as far as you can get from the euphonium’s common British brass-band habitat. Similarly, Wagnerian bass trumpets are treated to an outing; if you haven’t got the message already, all of these instruments are lower in pitch range and offer a darker quality to many of their mainstream counterparts, and that’s what this library is all about.

It’s dark, sonorous and brooding in a way that’s very unique. However, good as all the orchestral stuff is – and it really is outstanding – I have to say that I was even more drawn to some of the timbral goodness that’d often be considered outside of the orchestral setup, so let’s head to District Two, which essentially consists of choirs.

While the choir patches fall into the same dynamic camp (pianissimo to mezzoforte), they are exceptionally effective. We have a basic set of patches, mostly consisting of monophonic legatos (which are again exceptional), polyphonic sustains, staccatos and marcatos, and as heard elsewhere in the OT lineup, we have some elements of ‘cod’ Latin thrown into the shorter patches, which provide some variation and colour to boot.

Both Male and Female timbres are available, as well as a more stripped-out Children’s Choir patch, which just offers legato and sustained chordal patches. But never fear, because despite the lack of additional patches here, the crossfaded underbreath of the children opening via a MIDI CC controller to an open ‘Ah’, is sublime.

Moving on to District Three, we have a very plentiful supply of percussion, but here I feel there is a slight break with the library’s manifesto, as it feels rather louder and dynamic than all the colours we have heard so far, and with good reason.

We have plenty of cinematic-type material here, but with no enormous clues as to the flavour of some of the colours. I say this because I felt like I was hearing all sorts of hand drums and clay pots, and while the lowest common denominator is how it sounds, it’s always nice to know exactly what you’re hearing. So here we have a plentiful selection of all sizes of drum, running from smaller tight-skinned hand drums, up to what OT describes as ‘big boomers’. You can use your imagination here.

It doesn’t end here though, as we are treated to many other percussive sonic delights – a notable favourite being the waterphone, which has been extensively sampled with plenty of choice, and available in one patch setting with a wonderfully useful Time Stretch function, which does exactly what the name implies.

And, finally, we reach District Four. Now, as if things haven’t been brilliant enough with this library, for me, I feel that OT has left the best until last. What we have here is a really useful collection of timbre – at least useful to any scoring media composer. Apart from obvious ubiquitous choices, such as an intimate piano, we also have three intimate pianos, in the shape of Steinways, playing as a section.

The colour here is glorious and again, fulfils the low register and dynamic range superbly. Nestling alongside this patch we have two major highlights, in the shape of a harmonium and chamber organ. Both offer something different, in that wonderfully weird otherworldly sense, but I must also mention at this point the quality of the recording in general, as to my ears this comes across exceptionally with these two latter patches.

All the samples on Metropolis Ark 2 have been recorded at the Teldex Scoring Stage, which is one of those studios that has the experience, pedigree and overall knowledge to be able to generate a library such as this. It has played host to all the main world orchestras, from the Berlin Philharmonic, to the London Symphony and Chicago Symphony orchestras, and been used by many a film composer.

It’s been described as having just the right amount of natural reverberation; not too much or too little, and so this presents itself perfectly in the sampled and recorded form. Added to which, thanks to the complexity of Kontakt, there’s plenty of scope for looking after those subtleties required from time to time, whether it be varying the mic mix, or adjusting the release phase.

It’s not as comprehensive as some equivalent products in this respect, but I’m not sure it needs to be, as the basics are so damn good… What you need is available, when you need it to be.

There is no doubt that this library will appeal predominantly to media composers, or those interested in creating soundtrack-based music. There’s a great choice of sounds available and while they do very much lend themselves to the cinematic, this is not exclusive. If you compose music that might benefit from a good collection of more subtle orchestral colours, this is definitely worth considering; you’ll get a whole batch of other sounds that might interest you, too. 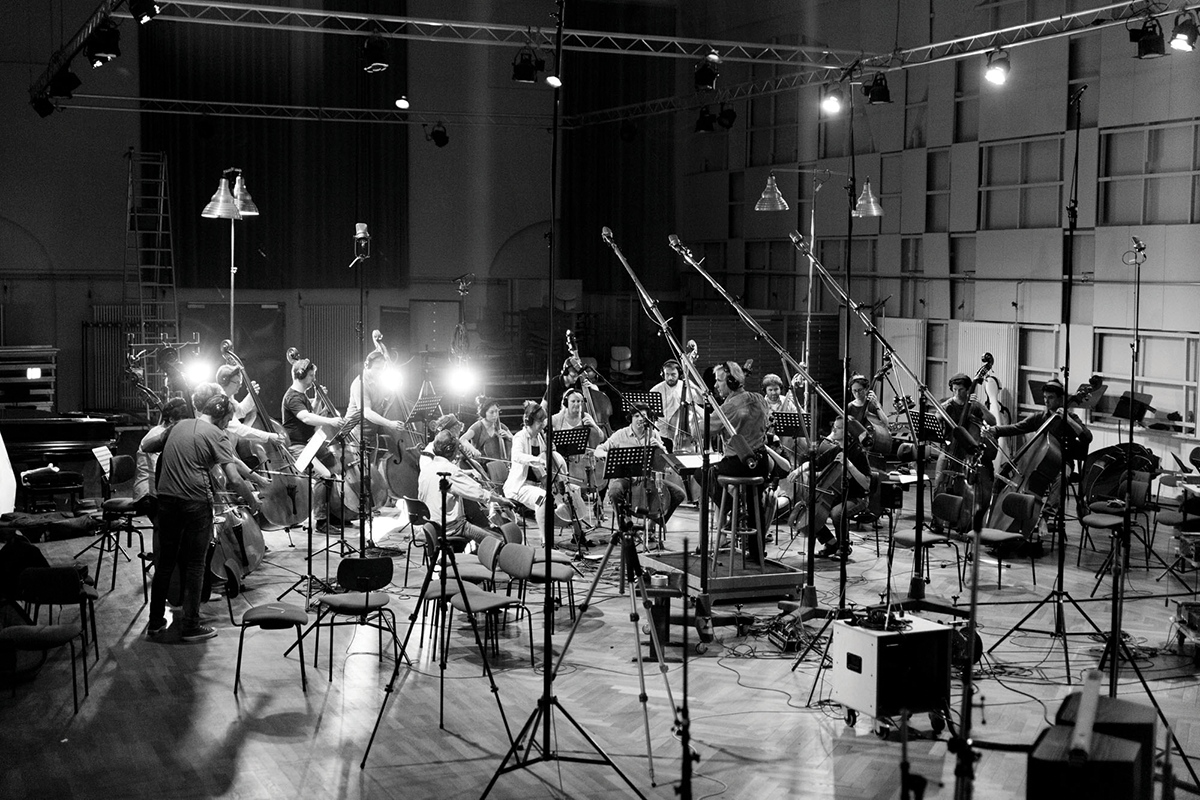 The choirs and pianos sounds great, as do the harmonium and organ, but it’s not going to be every day that you need these kind of colours, so consider this wisely. If you are looking for a mainstream orchestral library, this should not be your first choice – but if you’re looking for something to complement other libraries that you own, this should absolutely be up there for consideration.

The obvious recent library that shares similarities with Metropolis Ark 2, at least in terms of subtlety, is Spitfire Audio’s Albion V, which offers some similarly excellent sonic highlights, but also offers some more electronic-style patches alongside the outstanding orchestral colours. However, Albion III describes itself as ‘apocalyptic low end’, so might have other aspects in common here.

Albion III offers more straight orchestral patches, along with a multitude of other more synthetic colours, much of which is derived from an acoustic starting point. But if the electronic side appeals more, you could definitely do yourself a huge favour and look at Omnisphere 2 from Spectrasonics.

Although very firmly in the electronic camp, the starting point for many of the patches is some form of acoustic sample, and there are some excellent choices available, suitable for media-based scoring and composition. Don’t expect an orchestral library in Omnisphere 2, as you won’t get one, but there are some excellent string patches contained within, which work brilliantly when mixed in with other samples.

In general use, I found Metropolis Ark 2 to be a brilliant complement to some of my other mainstream libraries, offering some different content which is highly useable for both subtle cues and anything that needs that little bit of underpinning. It’s important to note that being Ark 2, this will naturally be complemented well by Ark 1, which is altogether more bombastic in nature.

So whereas OT bills this as ‘low dynamic epicness’, I would personally consider it more as a library for ‘dark subtlety – that’s fine, as that suits the style of writing of many media-based composers, and any composer wishing to extend their sonic palette. 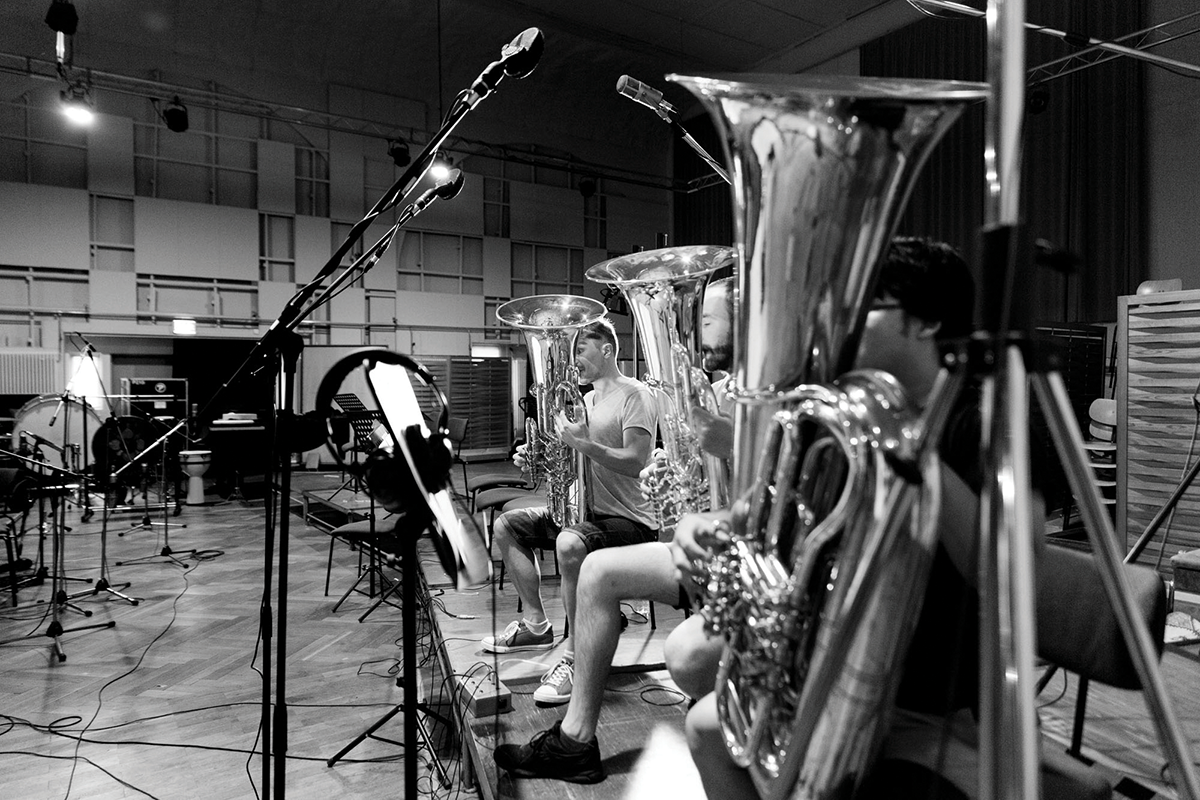 Make no bones about it, the quality of this library is not just up there, but right at the top of the tree in terms of fulfilling exactly what it sets out to do.

Unlike some libraries that I’ve worked with, I can honestly say that there isn’t a single patch here that falls short in any way, and I believe that this is in no small way down to the quality of the initial sample, which is nothing short of exemplary.

Metropolis Ark 2 oozes quality and variation in equal amounts, so go get yourself something dark and epic – and it might just change the way you score into the bargain. 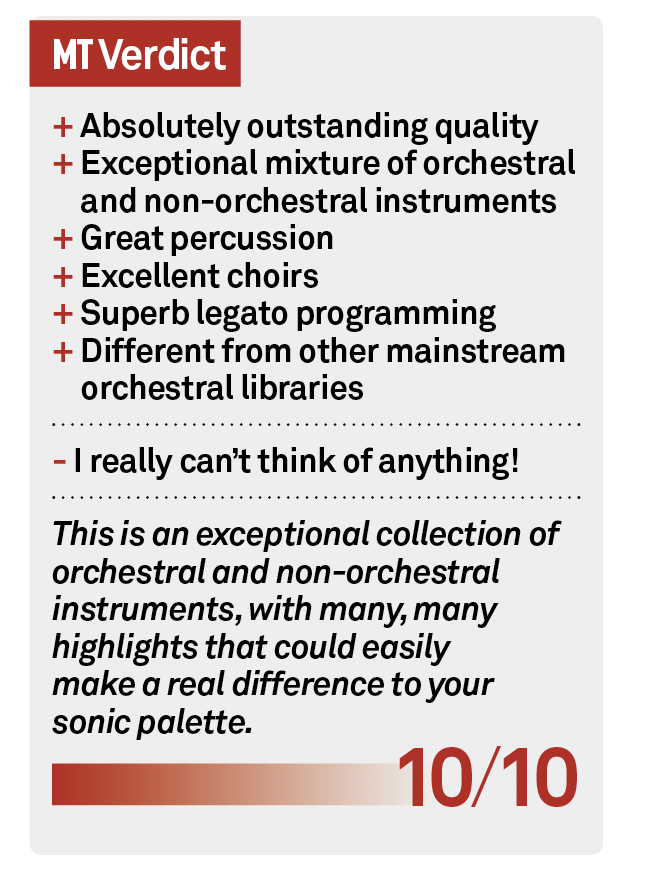