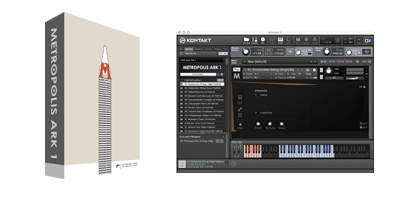 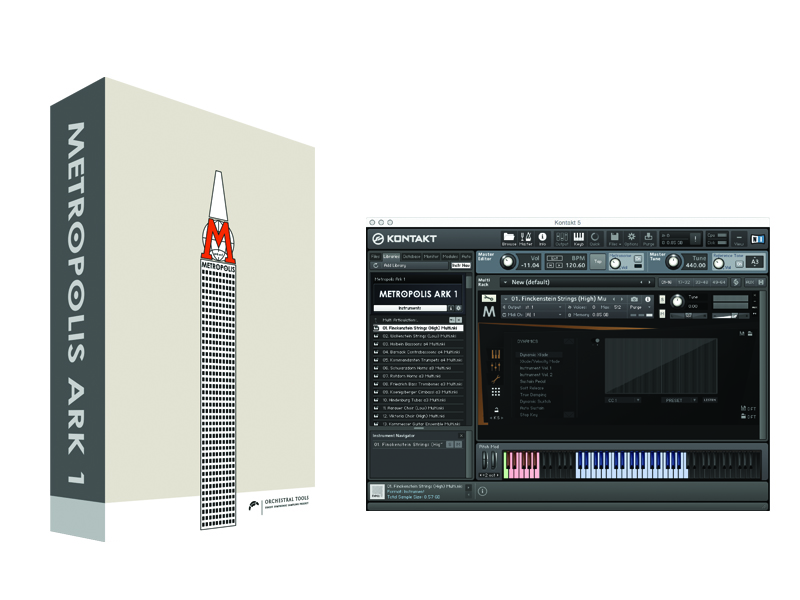 With the increasing trend for large epic film scores and trailer music these days, orchestral sample libraries are naturally growing larger as well, to keep up with the demand. Although a good many existing libraries are capable of producing loud grandiose scores, it was only a matter of time before something huge came along designed specifically for epic music production. Well, now it’s here in the form of Metropolis Ark 1 – The Monumental Orchestra.

Developed and produced by Berlin-based Orchestral Tools, it contains a huge orchestra, choir, electric guitars, percussion, a grand piano and a drum set. Everything sounds loud, with dynamics starting at mf and continuing upwards to fff. As you would expect, at 160GB it’s a hefty download (75GB compressed), but if you pay extra it can be supplied on an SSD. It runs in both Kontakt 5 and the free
Kontakt Player.

Recording the string orchestra as high and low strings (as opposed to the traditional four sections – violins, violas, celli and basses) is an increasingly common technique in libraries where a full sound and fast results are a key aim. Spitfire’s Albion is a good example, and Metropolis Ark 1 continues the trend with Finkenstein Strings (high) and Wolfenstein Strings (low). 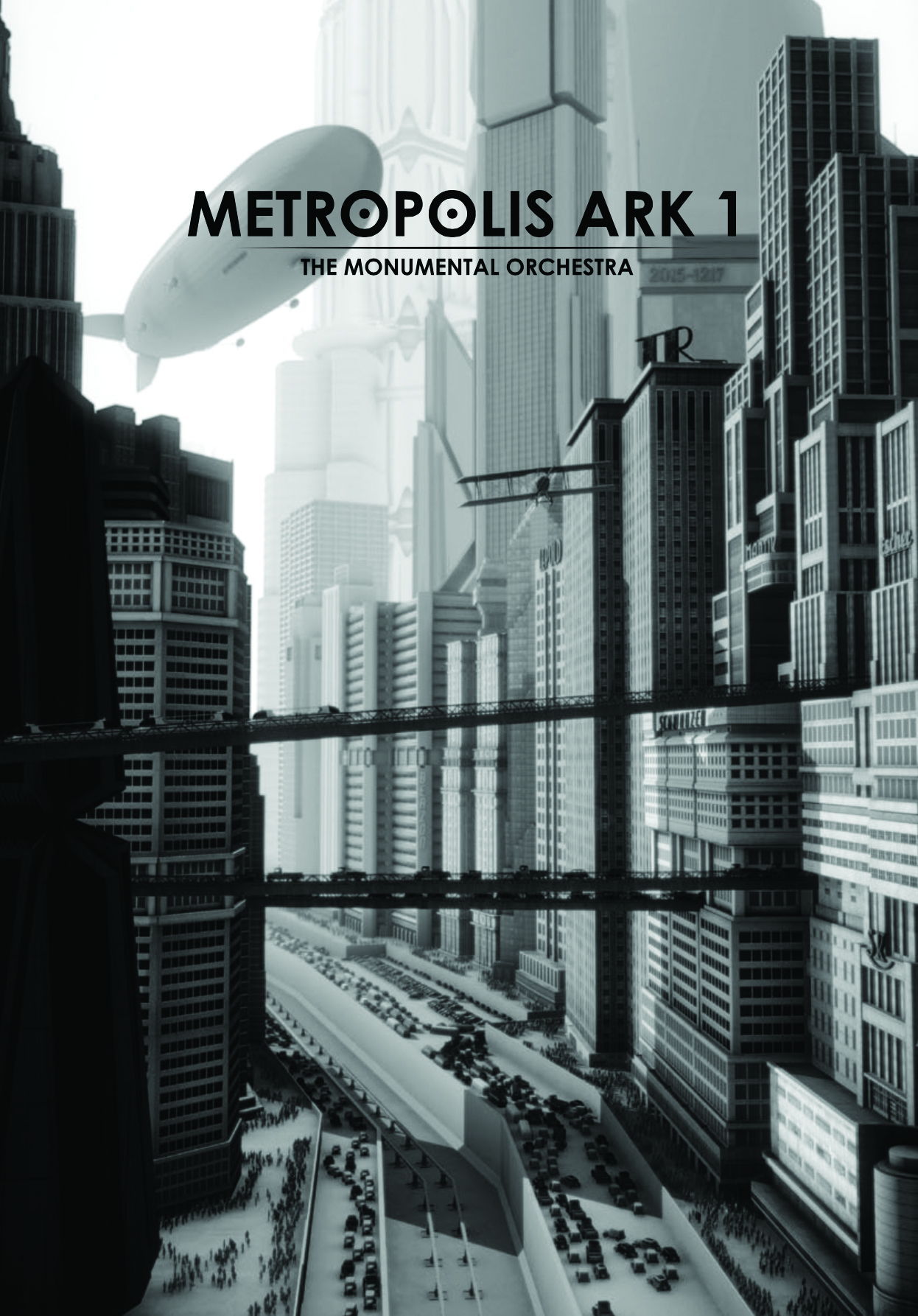 The high set can be played in unison or in octaves for a more powerful sound. Legato articulations are handled automatically, in the background. Turn on true legato and the transitions are adjusted according to playing speed.

The lower strings, including 12 basses and six celli are only available in octaves and produce a truly massive sound – great for dangerous-sounding riffs. All the important articulations are present, but remember this is an epic library, the pizzicatos are snap-type and capable of cutting through any wall of sound that the brass may be producing.

Wind Power
And so to the woodwinds, well the lower variety. No need for sissy-sounding flutes and clarinets here. However, there’s the very rich and fruity-sounding Holbein Bassoons (four of them) and the Barnock Contrabassoons (four of those, too), which produce the most wonderful growling noise when played in their lower extremities.

Heading the brass, four magisterial unison trumpets produce a splendid sound – think Fanfare For The Common Man and you’ll get the picture. Lower down, the three bass trombones are no slouches either, producing sounds ranging from low, raspy roars to searing upper-register notes.

Not so common in orchestral libraries, the cimbasso is a valve contrabass trombone. Originally used in Italian opera, nowadays it occasionally turns up in film soundtracks, which is why three of them are included here. Three tubas round out the plentiful supply of very low brass.

Epic percussion libraries are not so hard to find these days, but Metropolis Ark 1 has a fine set of ensembles and individual hits built in. Instruments represented are Solo Taiko, Taiko Ensemble, Surdo Ensemble and Percussion Ensemble. You’ll find similar content in other libraries, but it’s so convenient to have everything under one roof; it makes for a faster workflow.

No library destined for epic soundtracks would ever be complete without the horns. There are two sets here – the Schwarzdorn Horns, no less than nine of them for soaring emotionally charged lines; and for smaller section work, the Rotdorn Horns with just three instruments. 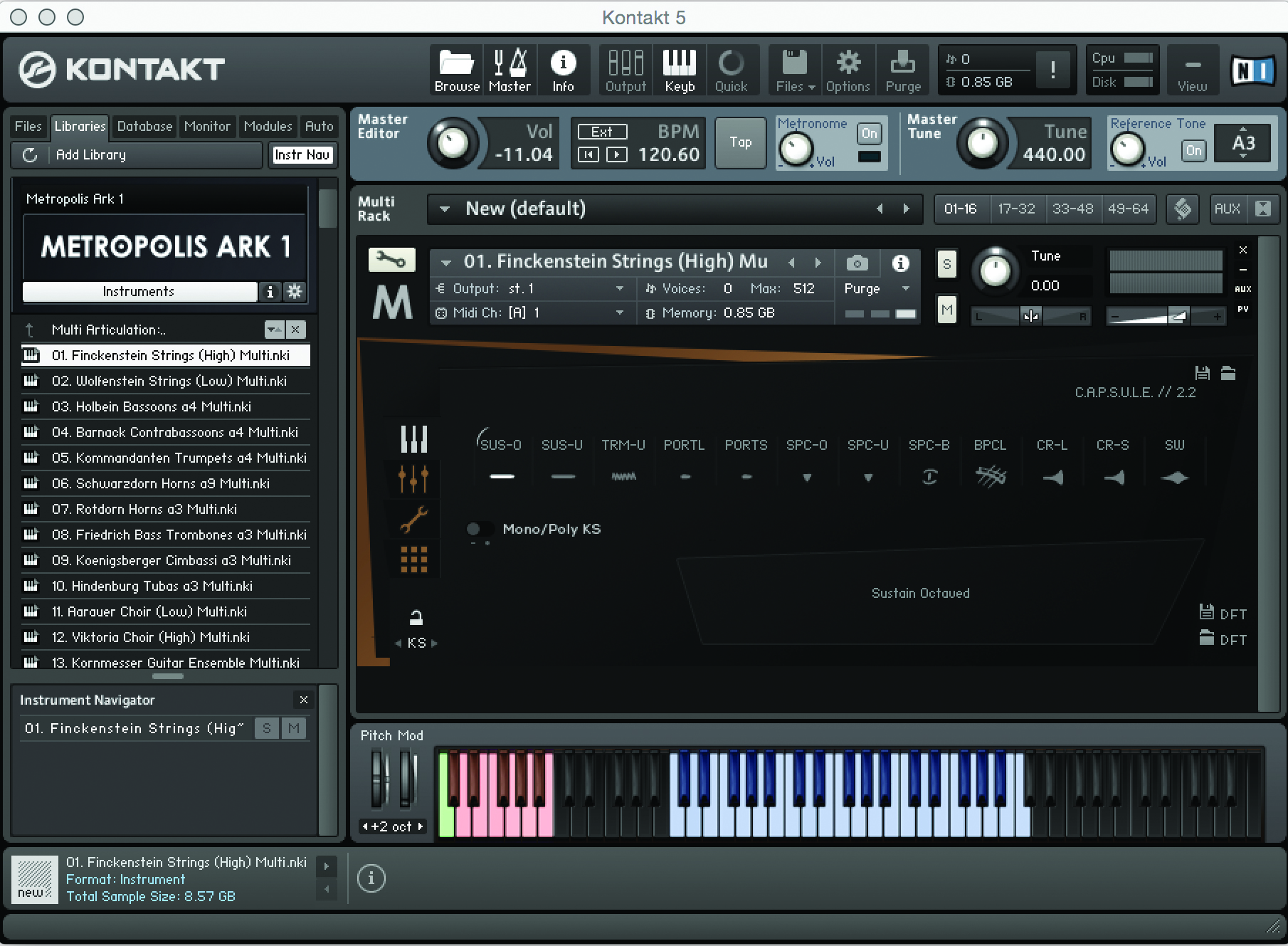 1: Metropolis Ark runs in CAPSULE (Control And Performance Symphonic Utility Engine), which in turn integrates with Kontakt. It has four pages: a Performance view, which features the most commonly used controls including the Main knob, used for dynamic control… 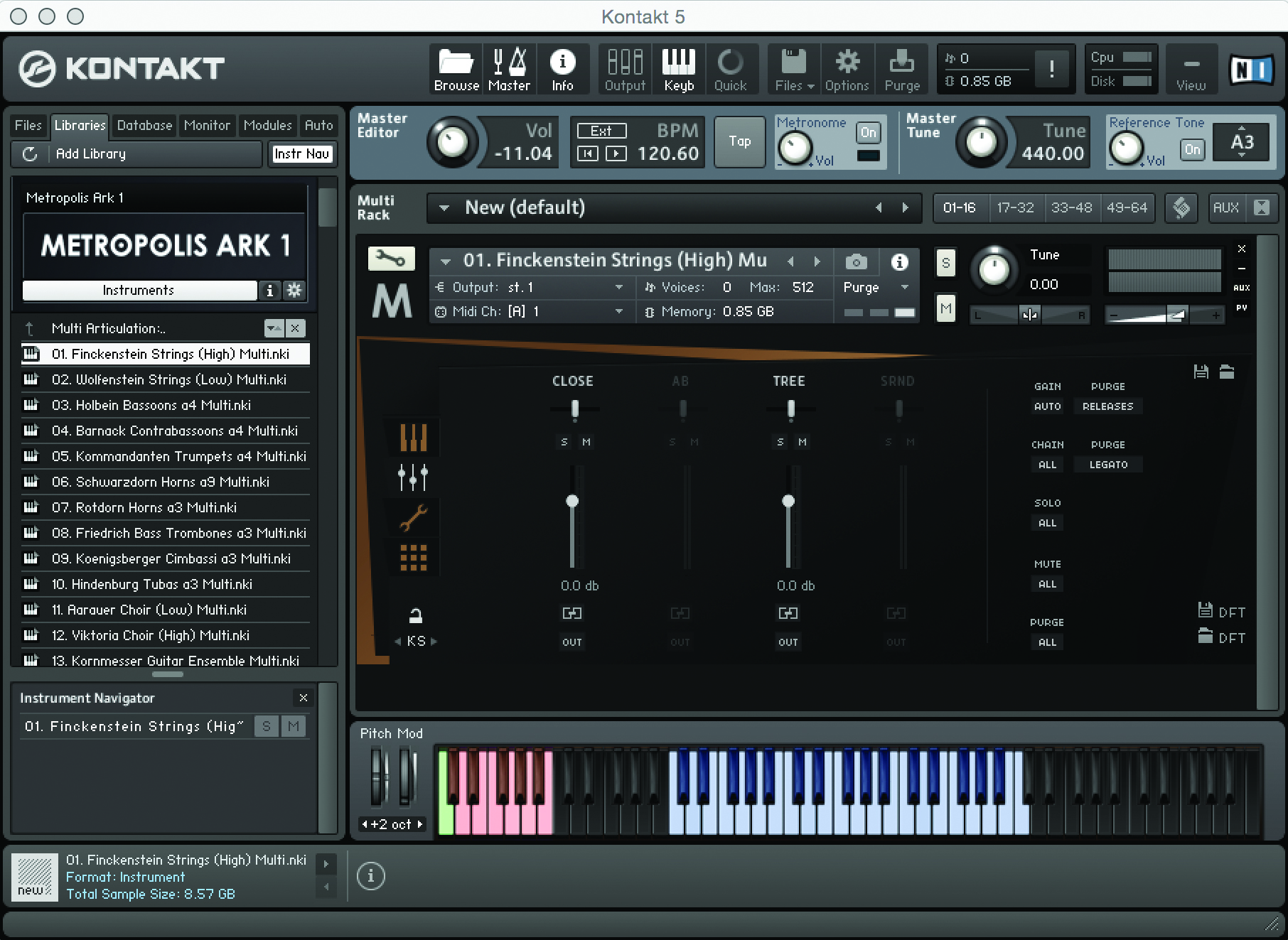 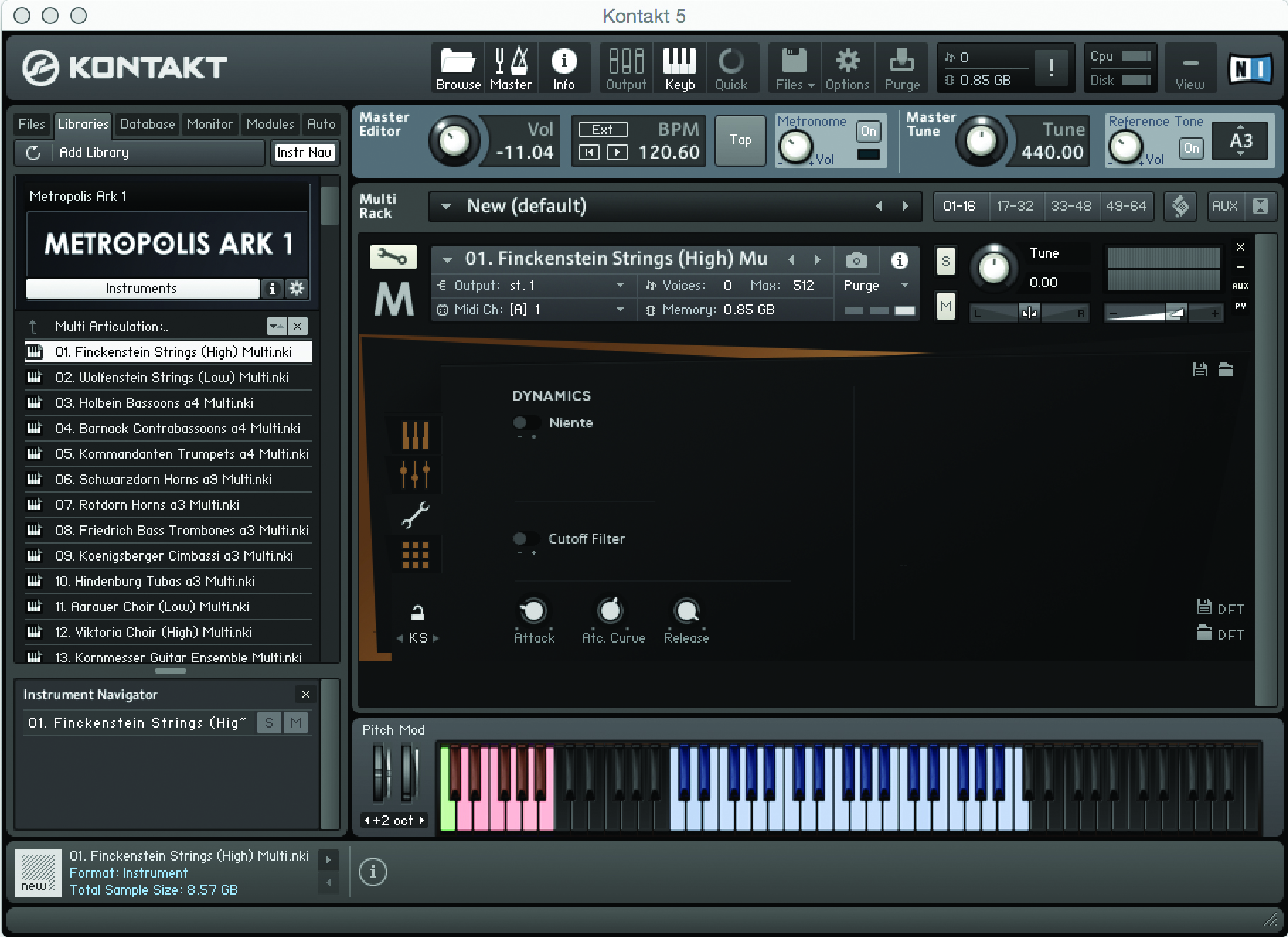 3: …an Instrument settings view provides a place to edit settings, such as performance dynamics, filters, attack and release, round robin and so on… 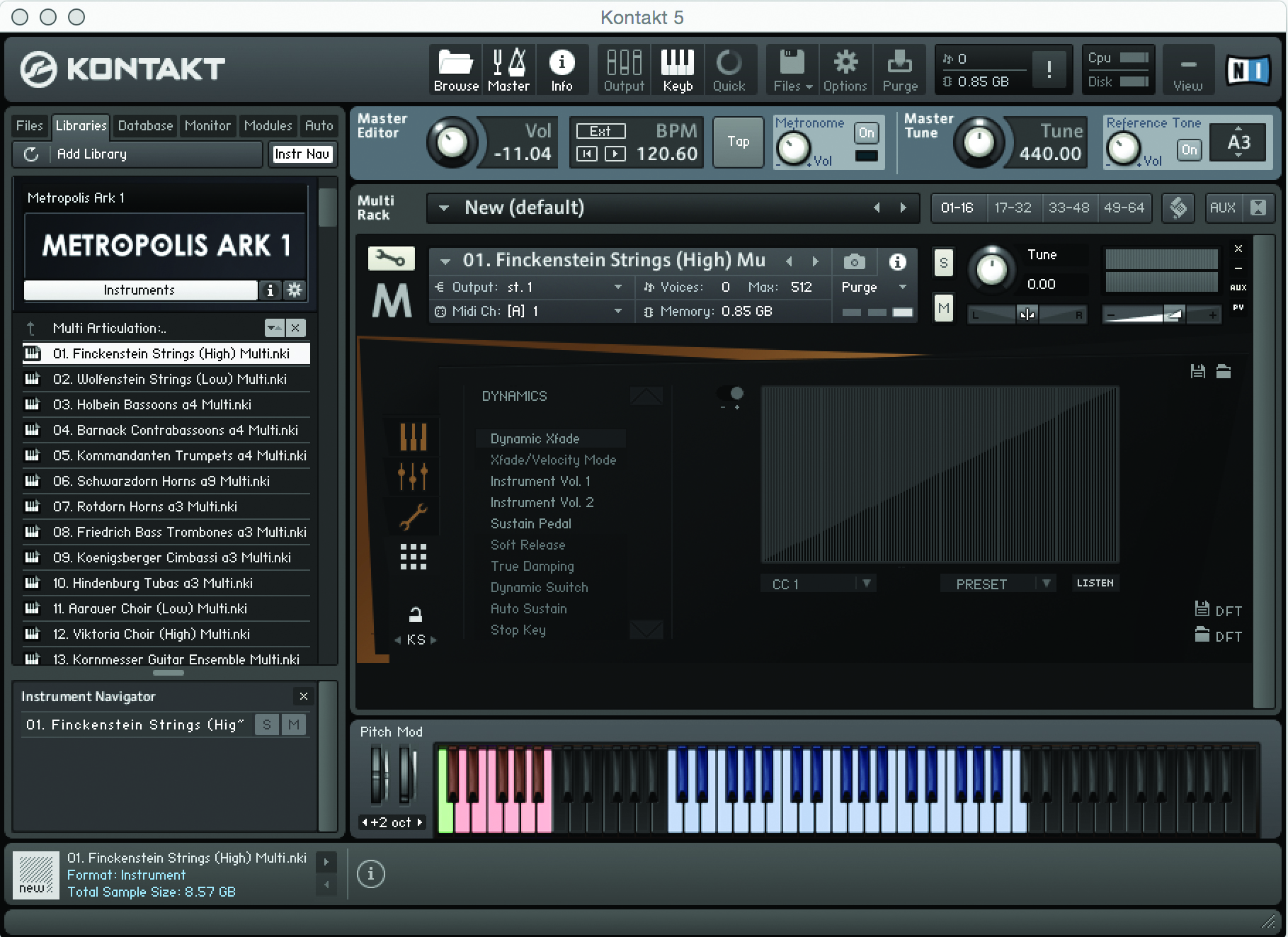 4: …a Controller Table view for assigning keys on a MIDI keyboard and MIDI CC messages to various Capsule features. Controllers can be assigned automatically and manually. The centre display is for drawing controller curves.

Do You Really Need This?
If you write trailer, game or contemporary film music – or any other type of production where very loud bombastic orchestral music is the order of the day, we reckon Metropolis Ark 1 needs serious consideration.

It’s beautifully recorded and blends well with other libraries. It’s not for everyone, though, which is why we were about to award a score of 9. But what the hell, we’re all fired up, so let’s give it 10 anyway! It deserves it.

Alternatives
With a more flexible approach and an even larger orchestra, Majestica, a 240-person epic symphony orchestra from 8dio is probably Metropolis Ark 1’s nearest competitor. A 100-piece string section is spread across the keyboard and there’s a 60-piece brass section.

At 25GB, the content is smaller, it doesn’t have a rhythm section and it needs the full version of Kontakt 5 to run it. The demos sound good, though.

Colossal Chorus
Like the strings, the choir is divided into high and low patches. It’s a mixed choir with voices at full volume. Latin syllables change note after note, both for single notes and chords – it works well.

After all, why spend hours setting up latin phrases when this method sounds just as authentic? A decent enough grand piano is also to be found in the percussion department and, although pretty loud when needed, surprisingly, we found that we could play it fairly quietly!

Last but definitely not least, there’s the band – a collection of electric guitars, an electric bass and a GM drum kit. Two guitars punch out a collection of powerchords and come with a few special microphone positions as well, plus – of course – effects.

We’ve concentrated mainly on the instruments, as opposed to the technical GUI features in this review because, frankly, that’s the Metropolis Ark 1’s strongest selling point. Obviously, it’s not suitable for gentle orchestrations, but for powerhouse productions we don’t think there’s anything to match it at the moment.

No doubt other developers will soon follow suit, but in the meantime, this should be the library to buy for any composers involved in producing epic soundtracks. 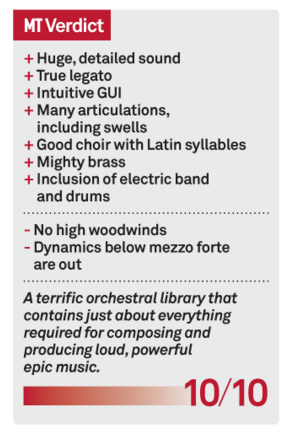