Andy Jones delves deep into Dave Smith Instruments somewhat phenomenal OB-6… DSI OB-6 Overview a) Variable Oscillators The heart of the synth, these offer variable waveforms for a huge sonic palette. Oscillator 2 can be used as an LFO and can be detuned. b) Mixer Dials for a simple four-part mixer for both oscillators and […] 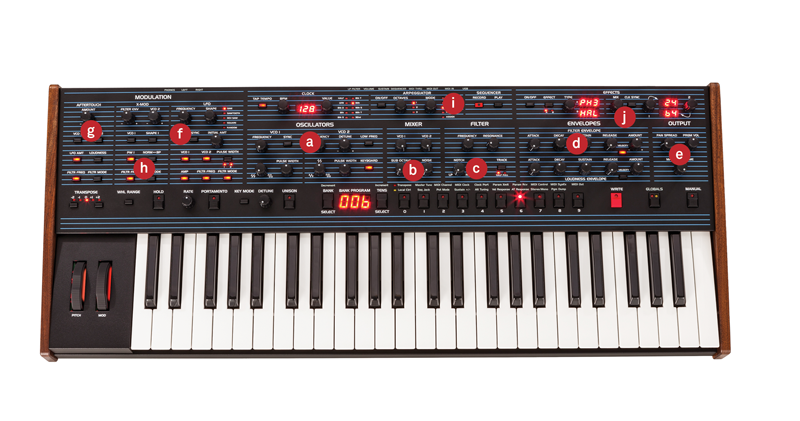 a) Variable Oscillators
The heart of the synth, these offer variable waveforms for a huge sonic palette. Oscillator 2 can be used as an LFO and can be detuned.

b) Mixer
Dials for a simple four-part mixer for both oscillators and noise source, plus a dial for the sub oscillator/square wave.

c) Filter
A 12dB/octave filter in four parts, again variable between low, notch and high-pass. A fourth band-pass option locks this dial out.

d) Envelopes
The OB-6 has two envelopes, one for the Filter and one for the Amp, to control attack, decay, sustain, release and amount of each over time.

e) Output Section
Simple controls for the volume of the program and main output, plus a Spread dial to control the amount of panning.

f) LFO Section
The first part of the modulation features is the LFO section: simple and effective modulation of oscillators, filter types, frequencies and more.

g) Aftertouch
Again, lifted from the Prophet-6, this allows you to easily assign destinations to aftertouch and is very easy to implement.

h) X-MOD
You get two extra modulation sources, but they can utilise all of the oscillator power for much more varied and evolving sounds.

i) Arpeggiator/Sequencer
Basic arpeggiation and sequencing is also included, as with the Prophet-6. Again, these are pretty easy to use.

j) Effects
Some of the effects are all new, including Oberheim models. Digital effects are standard, but bypassing them keeps the synth in a true analogue state.

OB-6 In-Depth
The OB-6 is inspired by the original Oberheim SEM and the heart of that effectively lies in the OB-6. It features two oscillators (plus sub) per voice, and one of the big draws of the synth is that the oscillators feature continuously variable waveshaping.

So on VCO1, for example, you can twist between sawtooth and square wave in one sweep, so one of your core ingredients can be sitting anywhere you like for lots of sonic possibilities. These are enhanced further with a Pulse Width dial. Oscillator 2 is also continuously variable, but features a triangle waveform plus the pulse width modulation and detuning.

Oscillator 2 can also be used as a modulation source, with a Low Freq button that puts it in LFO mode so you could, for example, apply it back to modulate oscillator 1. A Keyboard button changes the frequency of this oscillation according to the key you hit – I’ll talk more about that when we cover modulation in the X-Mod section.

Also in the Oscillator section, there’s a square sub wave to beef up your bass sounds. It also adds a more subtle richness to other timbres or, should you want, just use it as a separate source. Finally, there’s a noise source to add an extra top end and fuzziness.

The other important element of the OB-6 is the filter. It’s an ‘Oberheim-inspired’, two-pole, 12dB/octave filter in, effectively, four parts (hi, low, notch
and band) which offers a zingy, harmonically rich sound that lends itself to pads – hence the great reputation Oberheim has for them.

In a similar way to the oscillators, filter types are state-variable. so you aren’t just switching between types but flowing from one to another; you can sit anywhere between low and notch, or notch and high-pass, should you wish.

This creates particularly interesting sounds when you go between the latter two and sweep the Resonance knob – you get added meow… There’s also a Band Pass switch that lets you define a band and sweep through the frequency range, again offering rich results.

The variable nature of the Filter section means that you can create some very diverse sounds and, of course, with the oscillators variable, too, we’re talking vast timbre possibilities.

Next up, you can then bring the OB-6’s Filter Envelope section into the equation for movement and variation over time to really breathe life into more static sounds. Then, combine this with keyboard velocity (so hitting keys will alter your filter envelope and change sounds according to how hard you press them) and you open up another performance element.

Modulation Possibilities
We’ve seen how Oscillator 2 can be used as a separate LFO, but OB-6’s next section is for a dedicated LFO. Here, you get a Frequency dial to set the frequency of the modulation and what it applies to (VCO1 frequency; VCO2 frequency; VCO1 and 2 pulse width; amp; and filter cutoff and mode).

The LFO lets you select from one of five waveshapes: sine, sawtooth, reverse sawtooth, square, or sample and hold – which doubles as a noise waveshape when the LFO frequency is turned to its maximum setting. It’s a more basic modulation setup than you’ll find on other synths, but very easy to use because of that, and not unlike the Prophet-6’s (albeit with a slightly different layout). You select what the LFO modulates just by pressing the buttons, which then light up – which means you’ll very quickly start experimenting.

In my tests, modulating the pulse widths got some very pleasing results very quickly and, of course, using it on the filter frequency yields even more dramatic results. The Filter Mode option is also well worth experimenting with, as it cycles through the filter types for some very varied sonic movement. Again, though,

I have to go back to the fact that the core ingredients of what you are modulating are key here and with the variable nature of both filter and oscillator, you will get some exceptional results as you try different things out. It’s also worth pointing out that an LFO Sync button is on hand to keep all of this experimenting in check.

The Aftertouch section is also simple to use, and lifted from the Prophet-6. The amount of modulation that your aftertouch pressure will apply is controlled with a main dial (either positively or negatively) and then this can be applied to both oscillator frequencies, LFO or filter type and frequency. A typical use of this could be that you use aftertouch instead of the mod wheel to affect these parameters.

Combine this with the velocity/envelope performance options I discussed on the previous page and you’re talking easy, fun and very varied sonic performance capabilities. Continuing the modulation theme but getting into a bit more depth, we’ll now look at the X-Mod section.

X-Mod: Days of Future Sound
X-Mod is similar to the Prophet-6’s Poly Mod – a highlight of that synth and an area where you use Osc 2 and the filter envelope as extra modulation sources.
The advantage of this is not initially clear, as you may think that having an LFO is good enough for this task.

But, essentially, if you think of your LFO as a single oscillator modulating whatever destination you choose, then you can think of X-Mod as that multiplied by six. This is because X-Mod uses all of the oscillators available within the synth; so if you dial in VCO2, you have six oscillators modulating separately and independently from each other to create far more vibrant textures.

Waveforms start at whatever time you press a key – and this is a particularly dramatic effect when you hit the Keyboard button so that you start modulating destinations at the varied frequencies of the notes pressed. Also, because you are modulating with VCO2 rather than the LFO, you are modulating with a variable waveform with all of the extra sonic flexibility which that gives you over the fixed waveform (from five options) of the LFO.

As I’ve said, it’s not just VCO2 that is used as a modulation source in the X-Mod section, but the Filter Envelope dial can also be used; again, with the same destinations as VCO2 uses. So it can control Oscillator 1, its shape, the pulse width and so on, all the time mixed with VCO2 modulating, too.

Don’t worry too much if you’re not completely with me regarding the X-Mod feature. It basically opens up more sonic pathways than are available with other synths, routing more things, fattening things, and joining things up that might not be traditionally joined.

As for the results? Well, we’re really talking about more complex, evolving sounds, with a lot of movement, or richer timbres. Rather than everything moving ‘as one’, all modulated by one LFO, complex tones are created by this individual modulation per note/oscillator, or the filter envelope.

X-Mod is a section you’ll need to spend time with and is worthy of an article on its own, as it has so much potential. But the bottom line for now is, yet again: more sonic power!