This controller may not be for pros, but hobbyists and novices will be thrilled with some of the features on board 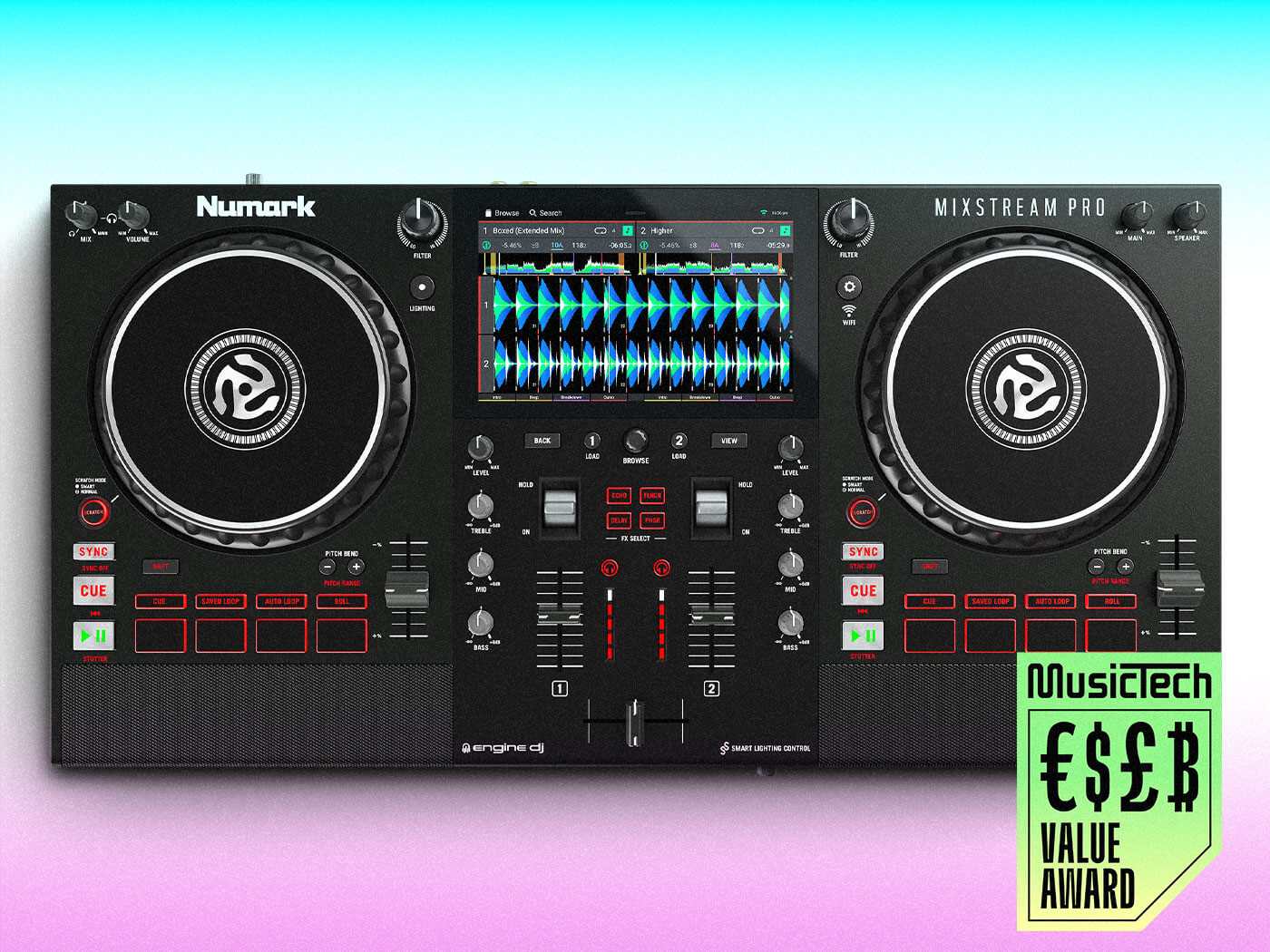 Standalone DJ controllers aren’t a novel concept – deck-making giants Pioneer DJ and Denon DJ have already established their dominance in that area. Numark is entering the ring, though, with an affordable standalone controller boasting built-in speakers, a seven-inch multi-gesture screen, access to streaming services and even lighting control, amongst many other features.

There’s plenty to love about Numark’s standalone DJ controller. It’s impressive, and we commend Numark for offering Mixstream Pro at such a reasonable price, but more creative and experienced DJs will desire more features. Now that Numark has successfully presented an affordable alternative for novice DJs wanting a fun standalone system with streaming capabilities, the ball is now in Denon and Pioneer’s court to offer the same.

Numark wants you to play Mixstream Pro right out of the box. Setup is lightning quick – just plug in the power cord, hit the power button, and let the controller self-calibrate for about 15 seconds. You don’t even need to connect Mixstream Pro to a sound system; the built-in speakers will let you blast out your tunes straight away. 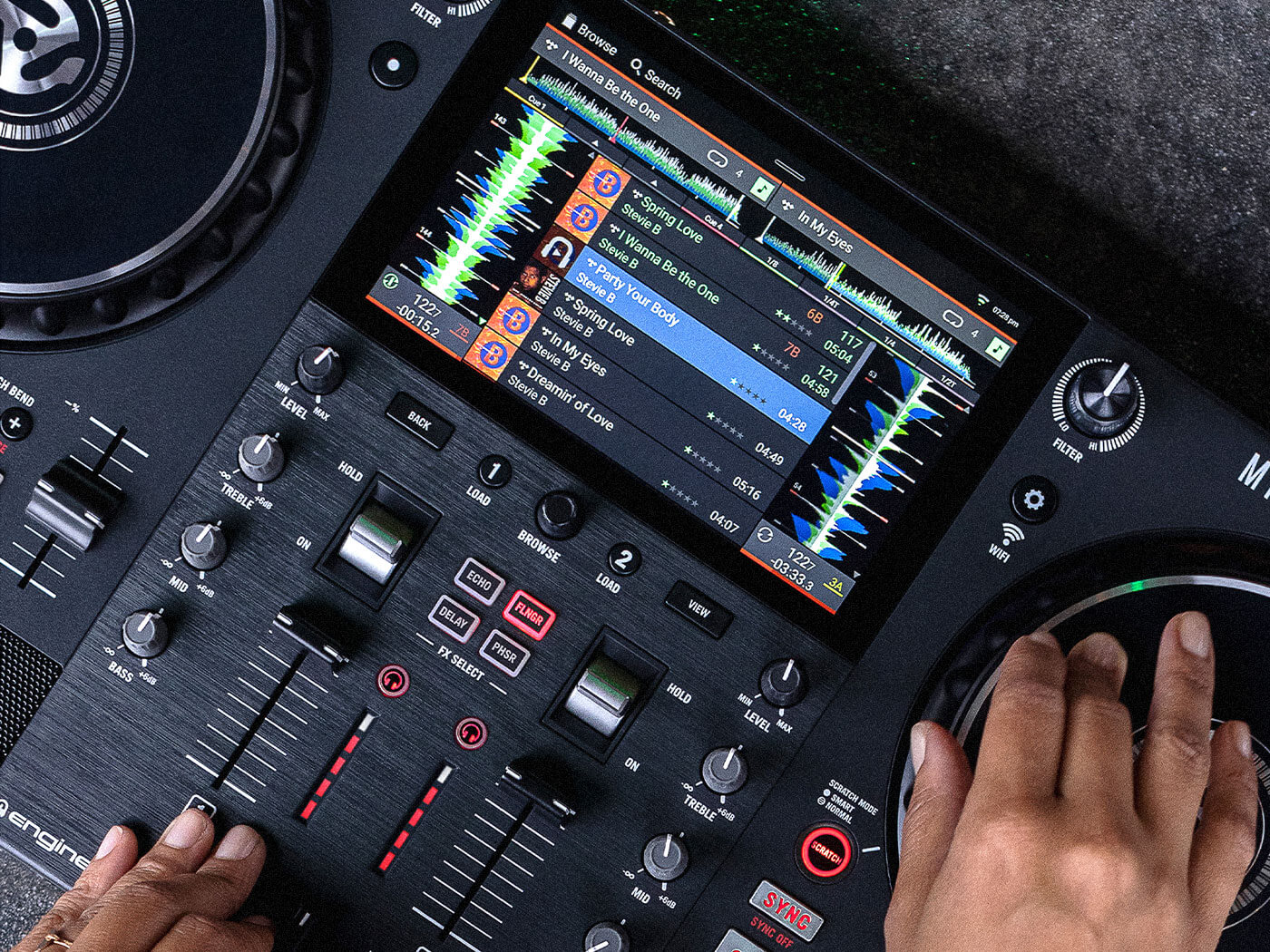 The speakers are adequate but aren’t powerful enough to please a room full of dancers. They also lack clarity in the low-end frequencies, particularly at high volumes. They’re perfectly reliable as reference speakers for your home practice sessions, though. Mixstream Pro can also hook up to Philips Hue light systems and DMX-equipped gear to effortlessly deploy your own light show.

You can play tracks via four streaming services: Beatport LINK, Beatsource LINK, SoundCloud Go+, and Tidal. There’s also an option to obtain tracks from a Dropbox account. Alternatively, you can use up to two USB drives and one SD card to import tracks into Mixstream Pro, but you’ll need a computer and a music library manager to load tracks onto the drive and create playlists.

Mixstream Pro’s USB slot is incredibly useful, and perhaps even vital. You can even record your mixes directly to USB or SD card without any external gear, which is a brilliant addition. Integration with streaming services is sleek and easy to set up, and is a fantastic way to save space on USB drives, provided you have a capable wifi connection. 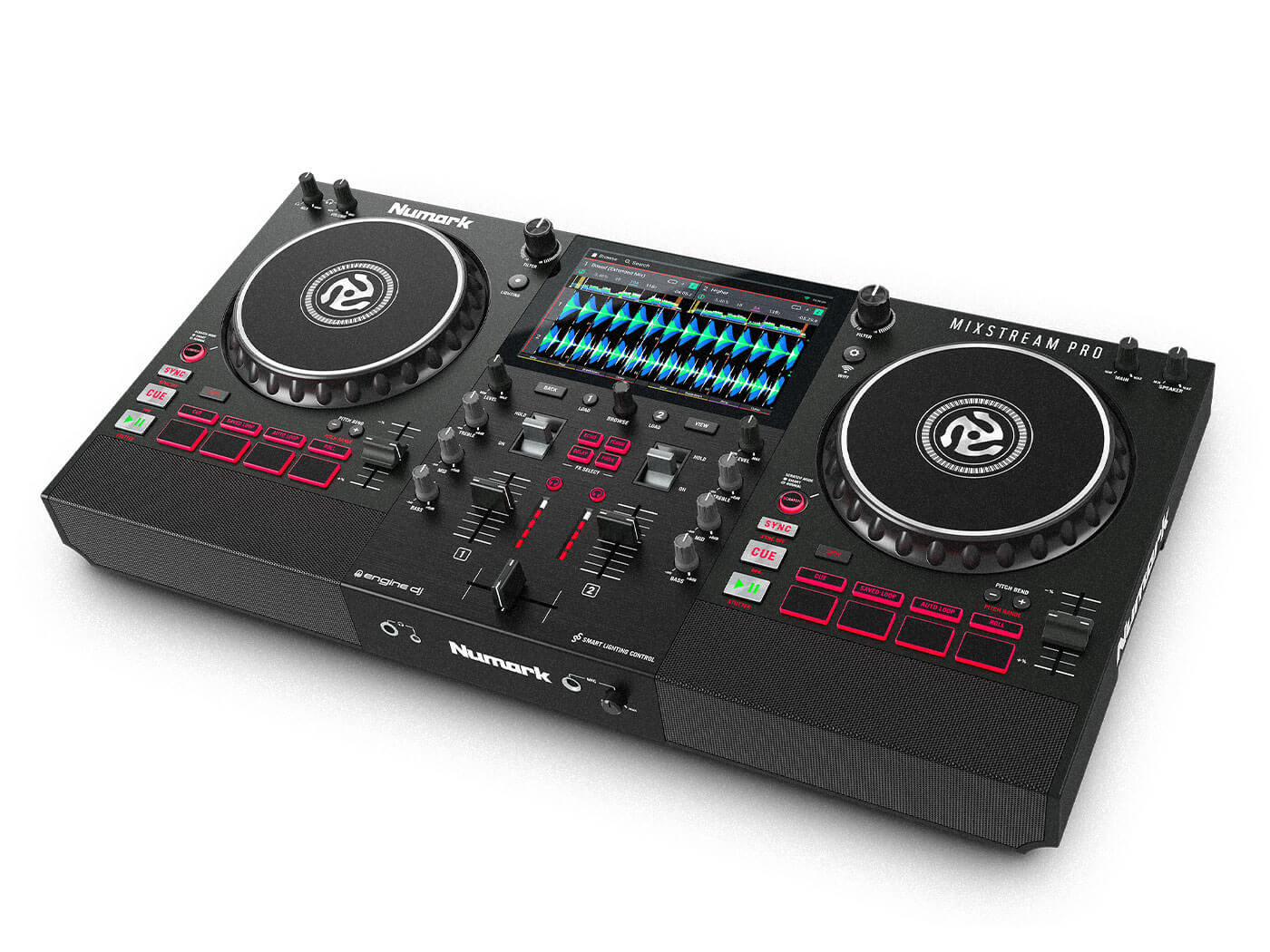 The Engine DJ OS user interface (created by Denon DJ) is straightforward and can be navigated via the multi-gesture display, rotary encoder, and the Back, View and Load buttons. You can browse music sources by playlists, artists, tracks, folders and search, along with History and Prepare tabs to load up previously played tracks and queue up new ones.

Numark has made it remarkably easy to get the hang of the built-in software, which is ideal for beginners. However, there were several times we came across songs on Tidal that matched together perfectly but found no way to mark this partnership or create a tag, which some users may desire. You’re also unable to save tracks from a streaming service directly to a playlist on Mixstream Pro, so you’ll have to create playlists on the service’s dedicated app.

A handy feature for getting familiar with your music is an autoplay function that lets you listen to your playlists as one set. 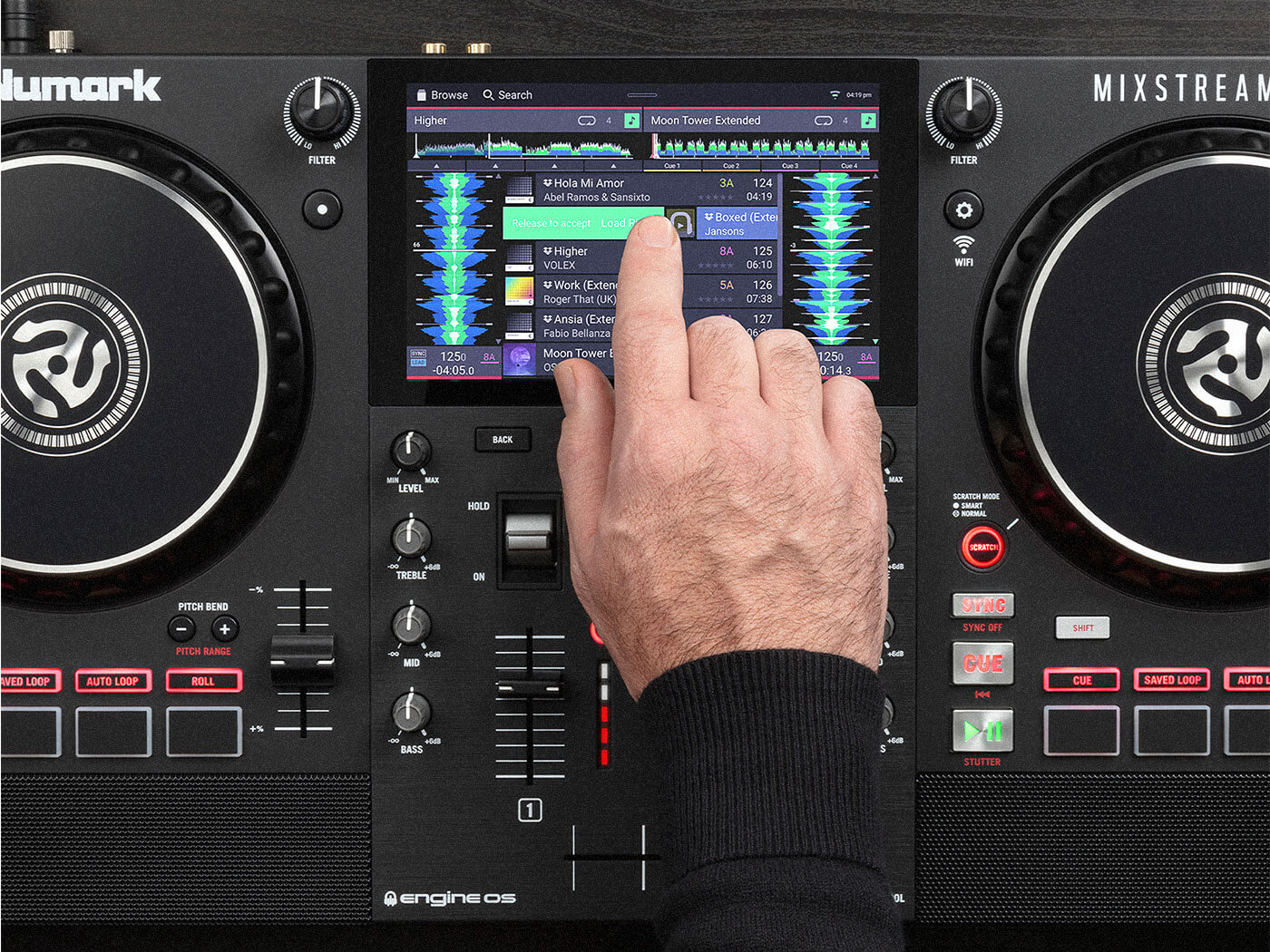 Upon loading a track onto a deck, Mixstream Pro’s default view shows the two decks as waveforms with the track browser in the centre. This layout enables you to see all of your cue points, loops, and timestamp in a track but you can opt for a less cluttered layout by holding Shift when you press View. The coloured waveforms give you a clear indication of how much frequency content is in a specific section. You can swiftly scroll through your music while keeping it on-beat by holding Shfit when spinning the jogwheel, which is great for finding the drop in seconds.

Each touch-sensitive six-inch jogwheel can be used in vinyl scratch or Smart Scratch mode, the latter allowing you to perform on-beat scratching. They’re responsive and boast a premium feel, making them a joy to use. Four performance pads allow you to set cue points, manually create and save loops, set auto loops and perform quick rolls for intense build-ups. The Shift button allows you to access an extra four slots, too, giving you a fair amount of flexibility in your mixing. In addition, each deck sports a one-knob filter for low-pass and high-pass attenuation.

Engine DJ OS capably analyses all music as it’s loaded onto the decks, negating the need for music library management software. Plus, Mixstream Pro’s pitch sliders can be configured to speed up or slow down your music by up to ±50, opening up seriously creative possibilities. To keep your music in the original key as you fluctuate tempo, you can hit the quaver note icon on the Engine DJ OS display in the top right of the track’s waveform.

The central panel is home to a three-band EQ for each deck, a crossfader, level faders, gain controls, an effects section, and the display and its controls. You can dive into the settings menu of Engine DJ OS to change crossfader settings, VU metering, and filter resonance – a superbly practical implementation of the DJ software. We hope that Numark provides firmware updates in the future to make more parameters customisable throughout the controller. 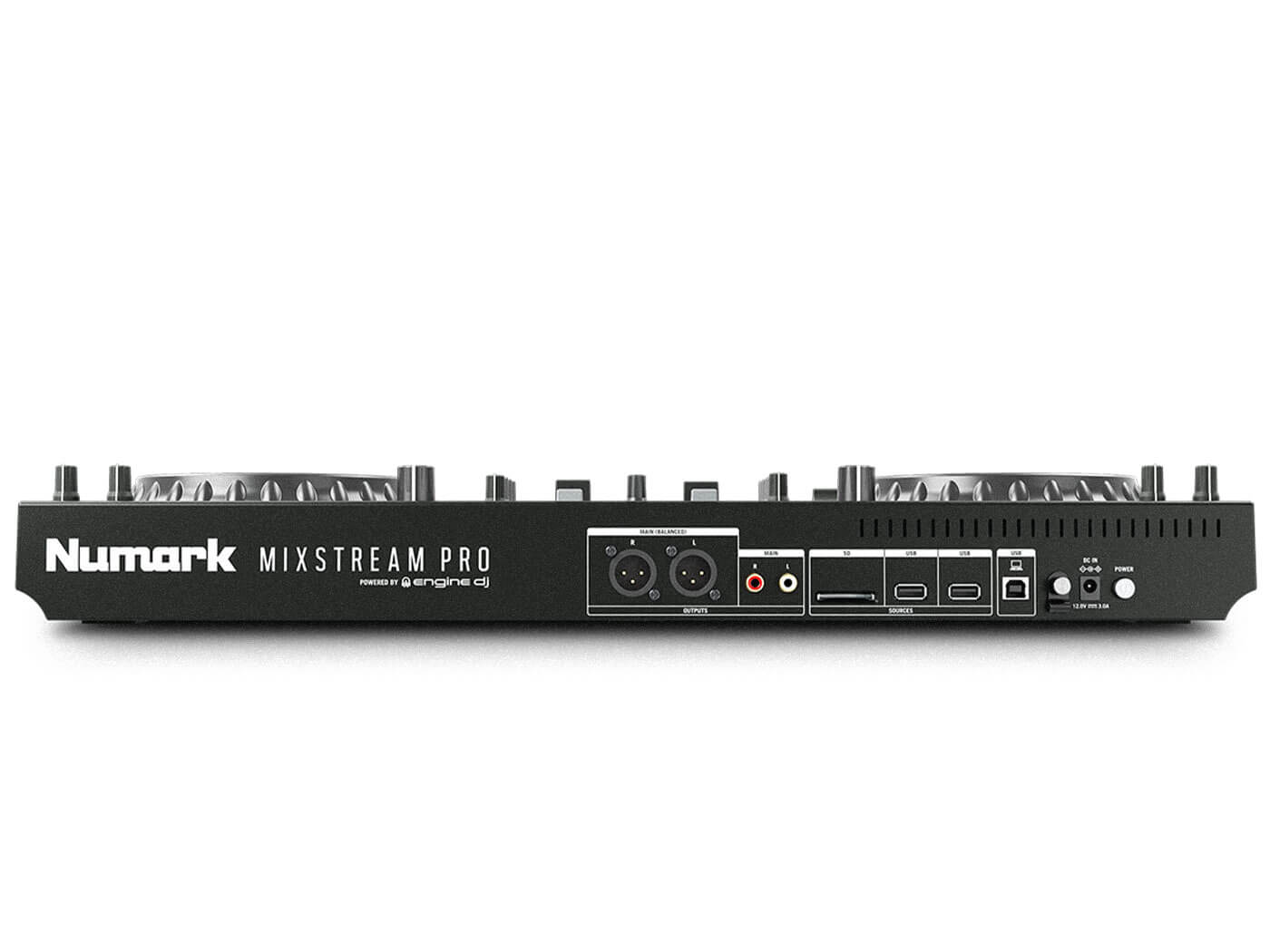 A future firmware update would massively benefit Mixstream Pro’s limited effects section. DJs are restricted to four buttons: an echo, delay, phaser and flanger, with no means of adjusting the prominence of each. This seems like an unconsidered move from Numark, particularly with the power of Engine DJ OS. Fortunately, you can still connect the controller to a laptop if you want deeper software control.

You can trigger each effect using one of the two paddles on either side. You can simply hold the paddle for a temporary application or flick it into the hold position to keep the effect going. The effect section will disappoint pro users but will offer some fun mixing sessions for entry-level DJs.

Mixstream Pro doesn’t have a featureset for DJs who are deep into their craft but novice DJs and hobbyists will have a blast with the system. With an unbeatable price in the standalone DJ market, Pioneer DJ and Denon DJ should be watching closely – with a few more tweaks, Numark could reign supreme here.