Are the loudness wars over? Nugen Audio thinks so, and with good cause. Hollin Jones road tests MasterCheck…   Details Price £102 Distributor Nugen Audio Contact Via website Web www.nugenaudio.com Amazon.co.uk Widgets It’s always been crucially important to meter your audio properly during the mastering process, but as technology changes the rules of the game […] 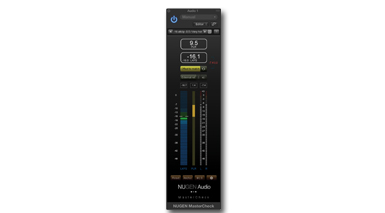 Are the loudness wars over? Nugen Audio thinks so, and with good cause. Hollin Jones road tests MasterCheck…

It’s always been crucially important to meter your audio properly during the mastering process, but as technology changes the rules of the game shift. For most of the history of recorded audio people consumed music in one of two ways: either by listening to it on the radio or by playing their own copy from some physical media. Nowadays, the range of delivery methods has increased dramatically and people are as likely to listen on Spotify, YouTube, iTunes Radio or another digital platform.

What you may not have realised is that these platforms all implement (or will soon implement) their own form of loudness normalisation, a process that automatically detects and equalises the loudness of different tracks so that the listener doesn’t have to keep adjusting the volume when, for example, an old jazz song and a heavy dubstep track are played in succession.

The problem is that producers have spent years fighting the so-called ‘loudness wars’, pushing volumes ever higher using limiting and compression in order to make tracks ‘stand out’ when played next to others.

But when music is delivered through a managed system such as Spotify or a TV broadcast its level can be pulled down by the processing that’s being applied by the delivery system in order to keep all tracks at a more or less consistent loudness.

So if you have squashed all the dynamic range out of the signal in order to make it extra loud and then that loudness is being pulled back, you’ve killed the dynamics of the track for no audible benefit.

Enter MasterCheck, a plug-in that you can strap across a master (or indeed any audio signal) to tailor your masters to individual targets. The idea is that you can actually produce a number of different masters for individual destinations in order to make best use of the dynamic range available to you relative to the loudness requirements of each one.

Load up a preset and you can press the Offset To Match button to audition the signal in the same way a listener of that particular service will hear it.

Invariably this involves it getting quieter, sometimes significantly so. The plug-in shows you the current PLR (Peak to Loudness Ratio), the target level and the current disparity between the two. Your task is then to mix and master with this target level in mind, taking advantage of the increased headroom and dynamics that you can gain by not squeezing a track so hard.

The plug-in has a number of meters including short term loudness, program loudness, short term PLR and true peak meter, and these can be colour-configured in the settings menu. There’s a middle and side mode and also an anchor control to pin the short term PLR meter to the top of the scale. 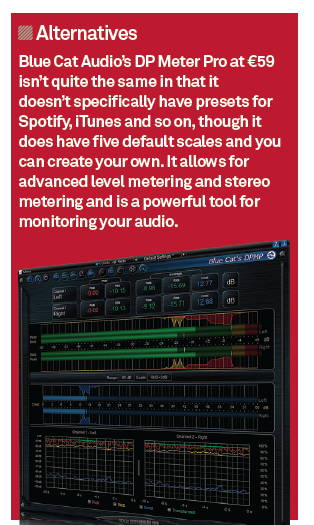 It uses industry-standard scales to display these levels and this can also help to avoid clipping introduced by compression codecs, which are known not to handle high levels as well as they could. Mixing to a level of -1 or -3dBTP can help to avoid downstream distortion after compression, which is performed by the service, not you.

You may be used to A/B’ing with reference material during mastering but MasterCheck takes this a step further, enabling you to use a reference track as a source for comparison by loading it up, inserting an instance of the MasterCheck Send and hitting the External Ref. button. This is nicely integrated and avoids the need for a complex or fiddly setup: just keep everything in-house.

In fact you can also use this tool to match up tracks and groups within a project, perhaps to maintain dialogue levels over the course of a radio broadcast. One further application suggested by Nugen is for ‘removing’ loudness from the signal chain. Louder music, the argument goes, sounds better. But that makes it hard to determine whether compression and other loudness processing is objectively improving things or just making them louder. By A/B’ing your audio with and without effects but matching the loudness, you should be able to make a more informed decision.

Check it Out
What MasterCheck does isn’t as flashy as a suite of guitar effects but it’s incredibly important for mastering engineers or anyone producing music for broadcast. We are now in a world where a ‘one size fits all’ master may no longer be enough – there are so many delivery platforms where extra processing gets applied that’s beyond your control. It’s the same for TV and radio, so the ability to master for these platforms is invaluable. You may not think that you can avoid killing the dynamic range and still have a track that’s loud enough, but you can. 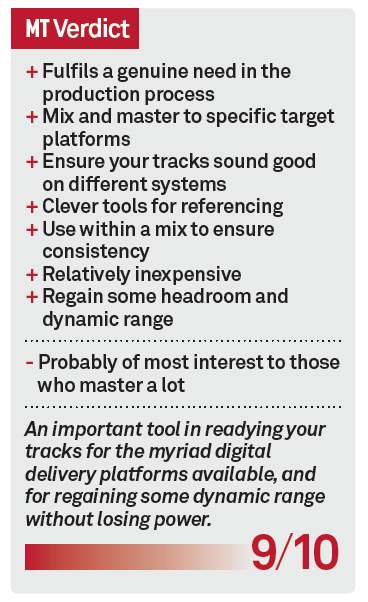