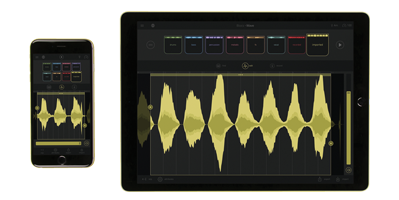 Wave hello to a new kid on the iOS music-making Bloc. Andy Jones ponders whether Novation’s new Blocs brand could usher in a fresh era of composition for Apple-based music producers… 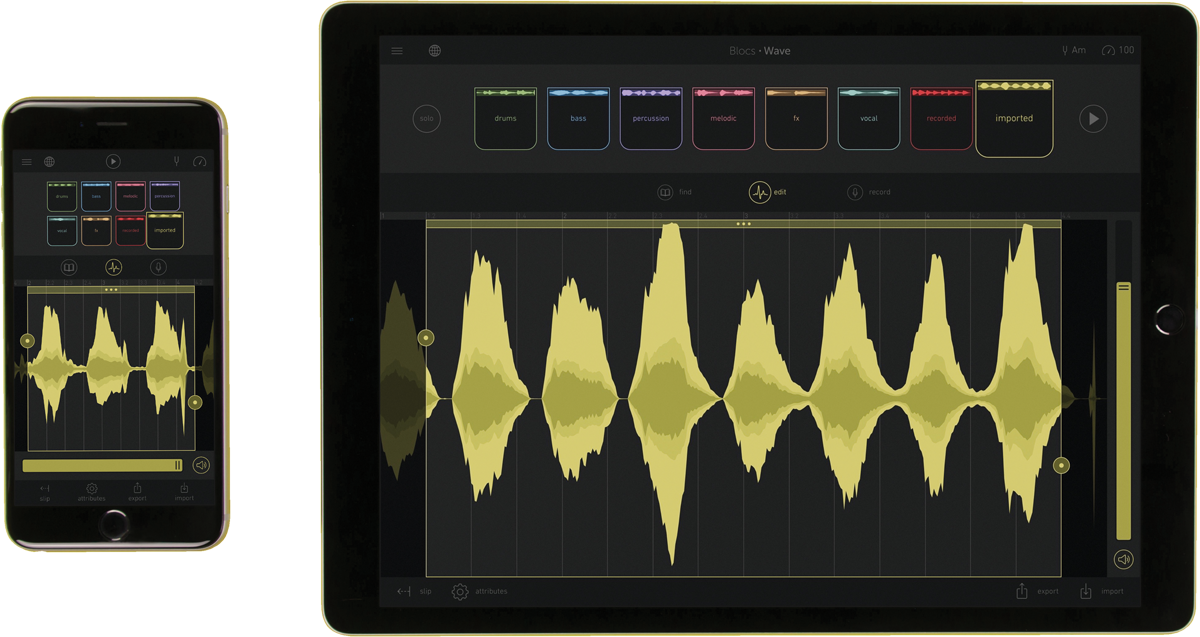 Novation seems to be doing its utmost to surprise us these days. When we expect one thing to come along, we get another. Circuit was a Groovebox for the 21st century.

I said a Groovebox for the 21st century, for pity’s sake. Who thought we needed one of those 12 months ago? Turns out we did, and it’s bloody amazing.

Now we have Blocs, a completely new brand and its first product: Blocs Wave for iOS. It’s an arranger/composer app, of sorts. It’s not quite what I thought it could be at first. Nor is it quite what I wanted it to be five minutes after that. But an hour into playing with it, it turns out to be something I didn’t know I wanted it to be, but now do want it to be! Just like Circuit then. Typical Novation. Or Blocs. Whatever!

On Your Starting Blocs
We would dearly love something like Ableton Live for the iPad and initially, I thought that Blocs Wave might well be just that. But while it’s not, it does have elements of Ableton’s finest DAW that make it quite beautiful and usable in its own right.

So Live is what Blocs Wave isn’t (yet) but what it is is an arrangement tool, and an ideas cruncher. You start with someone else’s ideas, 300 of them across six sound packs, for hip hop, house, indie, dark trap and more, and you arrange whichever ones you fancy into eight ‘blocks’ to come up with your own tunes. So far, so sample arranger, but fortunately, there’s a bit more to it than that. And potentially a lot more… 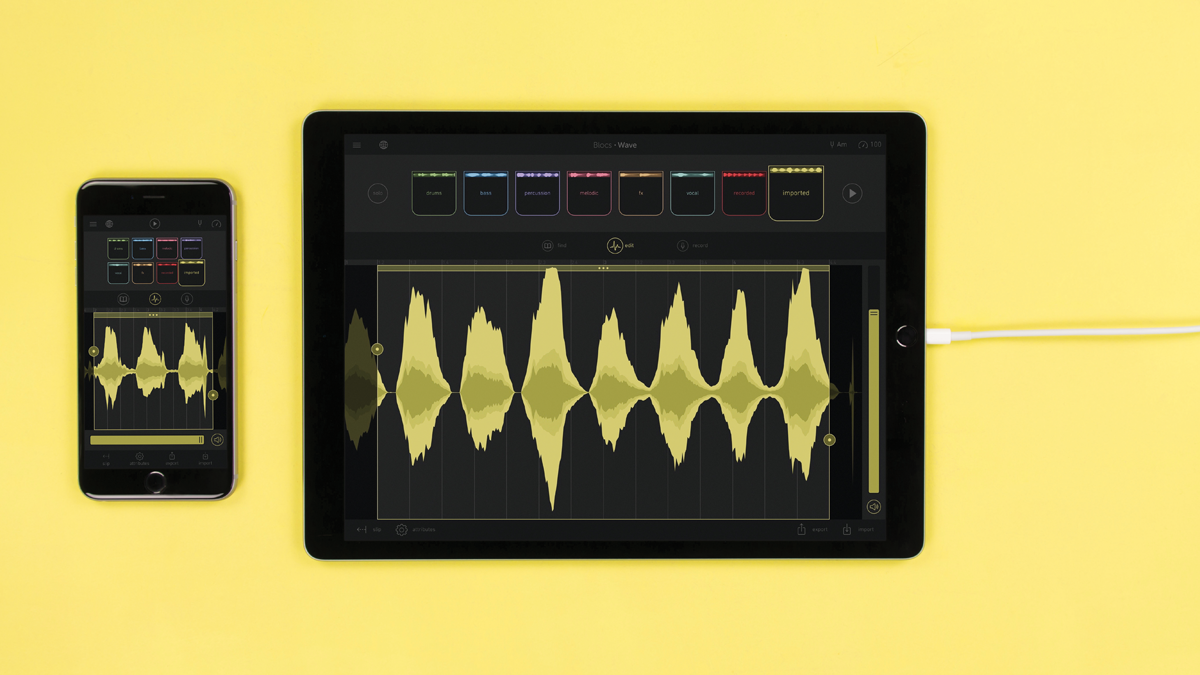 So each one of Wave’s sounds will play in time and in pitch with another one, so everything will sound great when combined – indie with trap, house with hip hop and so on (okay, it won’t always sound absolutely great, but you know what I mean). So, if nothing else, we have a great way of mixing musical ideas up in a very easy and intuitive way.

That’s because arranging sounds is very easy. You use a hexagon-shaped grid (the Discover tab) with your six song elements – bass, drums, melodic, percussion, vocal and FX – and you use it to fill the eight slots in your main song/project. You can then audition each sound from the six sound packs in the next two tabs, either by sound-pack type (genre) or sound type.

Press Auto, and ideas are randomly placed together. You can easily ditch a sound by replacing it with another (or undoing in case you make a mistake), plus easily mute and unmute tracks by swiping up and down. The programmers have thought this through; the swiping and touch are so well implemented, you don’t realise you’re doing it after a while, as it becomes so second-nature.

However, as easy as it all is to arrange, of course we all know that the real beauty and joy of composition is crossing the line from messing with someone else’s ideas to creating something that you can truly call your own. Fortunately, the wave editor makes this part a reality, as does some pretty impressive pitch-and-time adjusting, where you simply select your key, or plus and minus your tempo value to adjust. Both approaches work very well, particularly the tempo.

But wave editing is Blocs Wave’s real strength, and utilises all that iOS touch power for ease. Open a sample, shorten it, increase and decrease volume – it’s all possible, and everything you do just fits with what you already have. And while editing audio is the best feature, the most important one is the ability to import your own audio and export what you come up with. 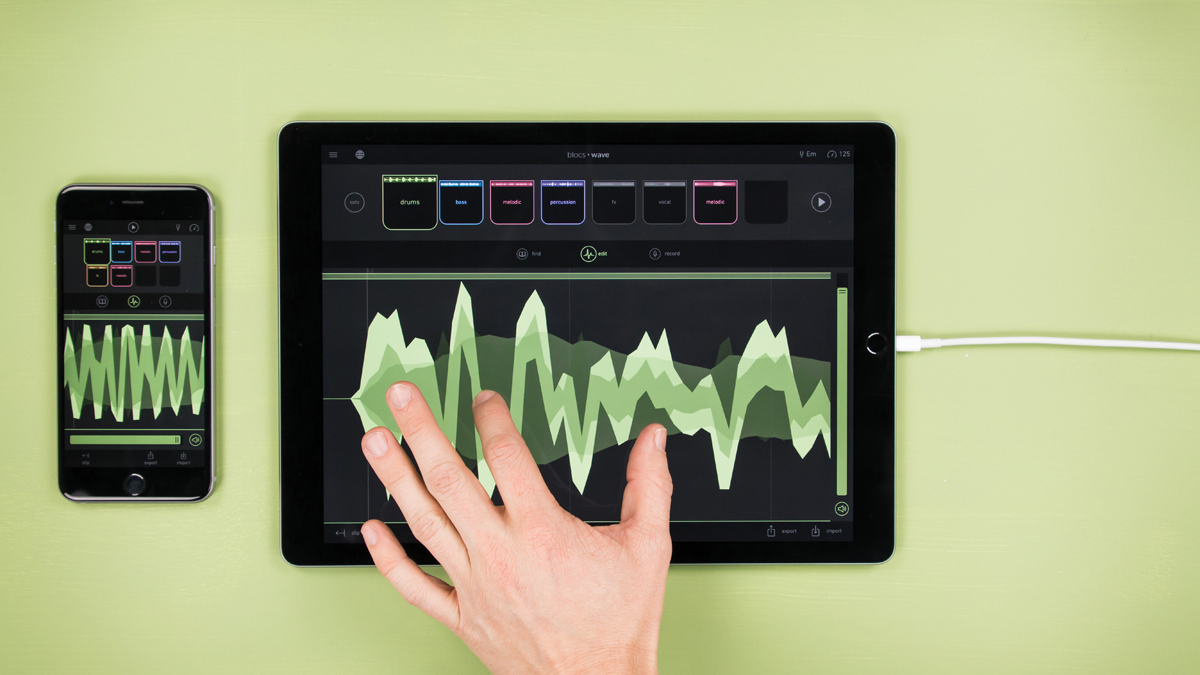 Now this is key, because I like Blocs Wave and I want to work with it, but with more of my stuff. I want it to connect up with my Dropbox (Drop Blocs?) and to batch-add a load of my loops.

At the moment, I can do this more slowly via the AudioShare App which connects to Dropbox, but maybe I’ll also want Blocs Wave to chain to the outputs of Logic and Live and for all of my ideas to flow into Blocs, so I can experiment with them on the move? So, clearly, I want some things that it doesn’t do… yet.

But this is very much V1 and I think the important part is done – the editing, the ease-of-use, the real-time pitch and tempo stuff – and the fact that I’m even thinking ahead to future versions means Novation/Blocs has done this well. So let’s look to a potential future. V2 could sync direct to Dropbox. V3 could well have a layer of cells that trigger loops – let’s call them Clips… See where I’m going? 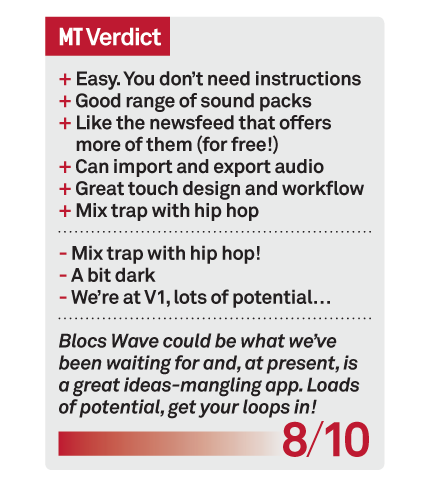