Everyone likes hands-on control, but what does Nektar’s latest offering bring to the party? Hollin Jones tests out the Panorama P1 in this review Price £220 Contact via website Web www.nektartech.com Nektar made the Panorama P4, a combined MIDI keyboard and controller for Reason, and now it’s back with the P1, a dedicated controller for Cubase and […] 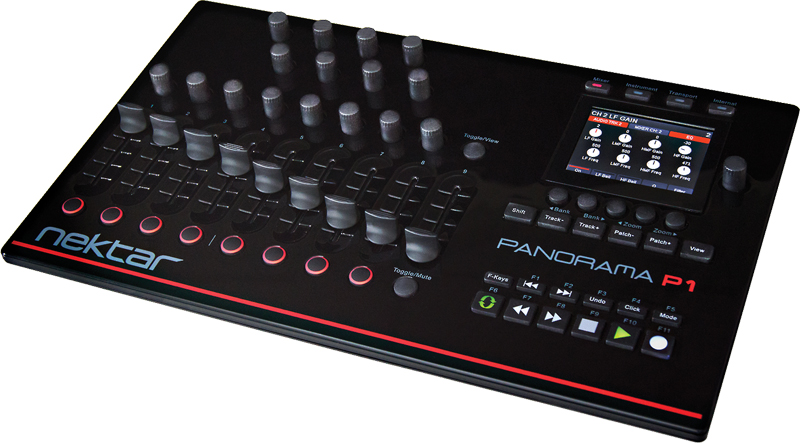 Everyone likes hands-on control, but what does Nektar’s latest offering bring to the party? Hollin Jones tests out the Panorama P1 in this review

Nektar made the Panorama P4, a combined MIDI keyboard and controller for Reason, and now it’s back with the P1, a dedicated controller for Cubase and Reason minus the keyboard. Reason has always been a prime candidate for hands-on control, especially since the introduction of the Remote system for hooking up multiple units so several people can play or tweak a session. Many people also prefer using a hardware controller to using the mouse for mixing and sound-shaping.

The P1 is light but well built and would happily slip into a backpack next to a laptop. It powers via its USB connection and there’s also a footswitch input and a lock port to secure the device. It’s not class-compliant and so requires the installation of drivers on your Mac or PC. These can be downloaded from Nektar’s website, though only after registration. It’s recommended you update to the latest firmware if you don’t already have it.

I can’t stress enough how much you need to follow the instructions on the website for getting things set up, because it’s more fiddly than you might imagine. Unless you follow all of the steps in the correct order your DAW won’t pick up the hardware properly and you’ll be left wondering why. The instructions could also do with being a little clearer, especially on the differences between the P1 and the other models in the family. You’ll need to restart your computer, too, to make sure that the drivers are initialised.

There are further instructions on how to get set up in Reason. Again, this isn’t as simple as Nektar suggests. In the latest version of Reason the control surface auto-detect failed to pick up the hardware even though it cycled past the device names while scanning. Manually setting it up worked fine, though here you have to wade through multiple MIDI port name assignments; again, carefully following instructions.

The P1 works in two modes: as an instrument and as a mixer, and each of these must be set up as a separate device. Once you’ve figured all this out it’s fine, but newcomers would appreciate the whole thing being streamlined a bit more. Setting up in Cubase involves switching various MIDI ports on to activate features.

With setup complete, the P1 springs into life and goes from being a generic controller with assignable controls (it can be used with any MIDI application) to a Reason or Cubase controller. In Reason it can make sense to lock the mixer device to Reason’s mixer, and when you do this the extensive controls can be accessed from the hardware for a good hands-on mixing experience. The P1’s colour screen is crisp and big enough to convey information well. As you’d expect, you can switch between View and Edit modes using contextual buttons, and navigate using a data wheel and various other controls.

Another handy feature is the ability to assign QWERTY Macros to hardware buttons. We all have keyboard shortcuts that we use a lot, but generally only a few. Using the software controller you can set up buttons to send commands, up to a string of eight in a row. So, for example, you might assign one to create a new track, load a new instrument or enter Edit mode, zoom in and select a tool. Being able to access commands outside the regular MIDI spectrum is really useful and helps you rely less on the mouse. And if you have Reason connected to Cubase or Nuendo over ReWire, you can control both from the hardware by switching modes, regardless of which app is in the foreground on your computer.

The Panorama P1 is a great Reason and Cubase controller with a good depth of features and programmability. It would help to try to streamline or simplify the steps you need to get up and running because they are presently a little long-winded. Once that’s done, though, it’s generally plain-sailing, and you’ll be taking control of your Reason and Cubase projects with ease.

If you want in-depth control over your Reason projects, you won’t get any deeper than this.