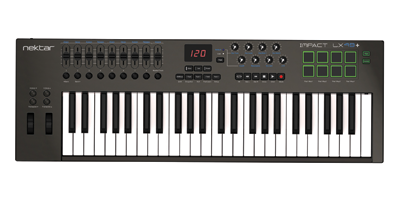 Can Nektar’s new low-price controller, the LX49+, compete with the more expensive smart keyboards? Alex Holmes grabs a USB lead, fires up his DAW and finds out…

In the last few years, we’ve seen plenty of smart-controller keyboards crop up, most of which require some sort of plug-in or wrapper to work with your computer. Nektar Technology however, has taken a different approach, and aims to to offer tight integration with a range of DAWs and minimal fuss.

Sitting in the middle between its Panorama and Impact range of keyboard controllers, the new LX49+ packs a hefty punch, but in a streamlined and affordable package, and essentially replaces the old LX range, adding more extensive features and an improved dynamic range for the pads and keys.

Around the back, you’ll find a 1/4-inch footswitch input and a USB port to power the unit from your computer or from an iPad (assuming you have a connection kit). As a nice touch, there’s a low-power mode that switches off the lights, so that you can use the keyboard for longer when powering from a laptop or iPad.

Alas, unfortunately, there’s still no MIDI Out, so you’ll have to go via your DAW to be able to control any hardware synths, but to be fair, that’s not unusual at this price range.

Construction-wise, it’s solidly built, and weighs just over three kilograms, so it feels substantial, but without being overly heavy. The pitch and mod wheels, sliders, encoders and pads are well made and have a smooth, high-quality feel, and all the buttons give a satisfying click when pressed.

Unfortunately, the same can’t be said for the synth action, medium-weighted keys, which don’t quite live up to the quality of the rest of the controls and feel a little loose in places. However, the sensitivity enables good performances with four velocity curves and three fixed-velocity options, and it compares favourably to other keyboards in the same price range, so we can’t really complain.

Nektar’s DAW integration means that once you’ve downloaded the software, the LX49+ has your DAW’s main functions intelligently mapped to its controls

The pads feel the right amount of firm, but with a little give, and with the same velocity options as the keyboard are more than capable of an extended finger-drumming workout.

The four LED colours can be used in several ways, from triggering coloured clips, to muting and unmuting drum sounds, and as the MIDI goes both ways, they can even receive information and be set to pulse in-time to the BPM when using Bitwig.

Arguably the most important and interesting feature for a keyboard at this price range is the Nektar DAW Integration. You simply download the installer for the relevant software from the Nektar Tech website and, after a few basic tweaks, you’re good to go.

The process will be slightly different for each DAW, but there are clear instructions for each of the supported programs. Speaking of which, you have Logic, GarageBand, Bitwig, Cubase, Digital Performer, FL Studio, Reaper, Reason, Sonar and Studio One. Ableton seems notably absent, and we can only assume it’s due to some sort of licensing issue, but with a bit of time spent on setup, there’s no reason why you couldn’t use the LX+ with Live.

We dived straight in and tested out the mapping using a bunch of Logic’s built-in instruments and the Inst mode on the keyboard. To help take the guesswork out of using different synths, eight of the faders are wired to the amp and filter envelopes, and the eight encoders to the main synth parameters such as Cutoff, Resonance, and Oscillator pitch, with tags printed onto the casing.

This is actually quite a nice way of building muscle memory, and although you have to spend some time learning exactly what some of the controls do, as there are subtle variances from instrument to instrument, we found this to be a useful feature. If you load in a third-party instrument that hasn’t been mapped, then it will take a guess using some clever Dynamic Parameter Sensing, which we tested on a couple of soft synths and found fairly effective.

There is, of course, no getting around the fact you have to do a bit of work yourself if you want the LX+ to work specifically with your setup. At the push of a button, you can flip the eight encoders to User mode, where they can be assigned to your controls of choice.

It’s quick and easy to remap these as you just press the Shift button, touch a control on-screen with the mouse, then move the control on the keyboard. That said, this method only works on certain DAWs, as in Logic for example, you have to use Logic’s own Learn feature, which gave us a few teething problems on our system. 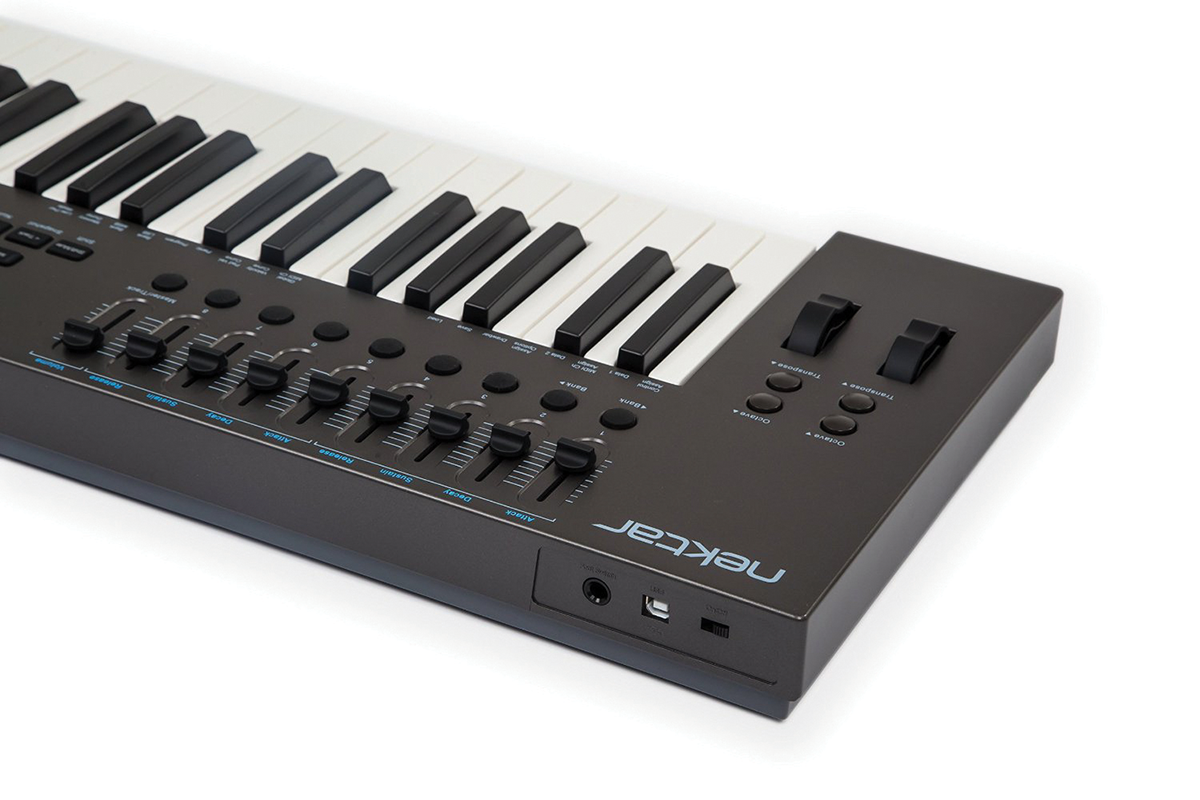 The exact functionality and integration will vary depending on what you use, with Digital Performer and FL Studio not quite as well integrated as say Bitwig, Cubase or Reason. There’s a handy chart on the Nektar website that should give you a good overview for each piece of software though, so you can check before you buy.

Elsewhere on the LX49+, you have transport controls, with additional functionality via the Shift key, allowing you to do things like undo and set in and out loop points. You can also use the pads to create markers and then jump to them.

If you hit the Mixer button, Logic’s mixer will pop up on screen, and you can use the sliders, dials and buttons to control volume, panning, and mute/solo of eight tracks, with additional banks of tracks accessible via the Octave buttons.

Other nice touches include a Pickup mode to avoid parameter jumping that will only update when you move a fader or pot past the retained value. An especially welcome feature is the Pad Learn function, where you could have a drum bank spread across the keyboard and you simply hit the pad, then the key that you want to play on it. This way, you can quickly build a set of sounds to perform with the pads, and you can store four pad map locations.

The LX49+ can store up to five presets, which allows you to quickly switch between different controller-assignment setups. Although it’s a little time-consuming to program, this will help if you want to control multiple pages in a complex instrument, or to control multiple plug-ins or bits of software.

You can also quickly switch MIDI channels, so as an alternative, you could leave the CC settings the same, but program different instruments or pages to respond to messages on channels 1-16.

There are plenty of options for MIDI controllers, including the M-Audio Oxygen 49 (£114) which has a similar overall layout, but not quite as intelligent mapping. There’s the M-Audio Code 49 (£199) which is a bit more comprehensive and has 16 pads. Novation Launchkey 49 MKII (£149) could be a better bet if you’re using Ableton Live, as could the Korg Taktile 49 Pro (£187), which also has an X/Y pad; but you can’t really beat the LX+ for features and price.

On a basic level, the Transport and Mixer controls work straight away, and instrument mapping, although not perfect across the board, provides some instant gratification.

However, to program and get the most out of the controller, you’ll need work with multiple button and key presses and the small screen, and unless you have a plan, the assignments could get a bit confusing. Ultimately, it’s down to your organisational skills, and it’s great that the flexibility and functionality are there to give you the option of setting up the LX+ exactly how you want.