The A-Series took some beating, but now Native Instruments’ compact keyboard does Komplete Kontrol and NKS even cheaper. We unbox the M32. 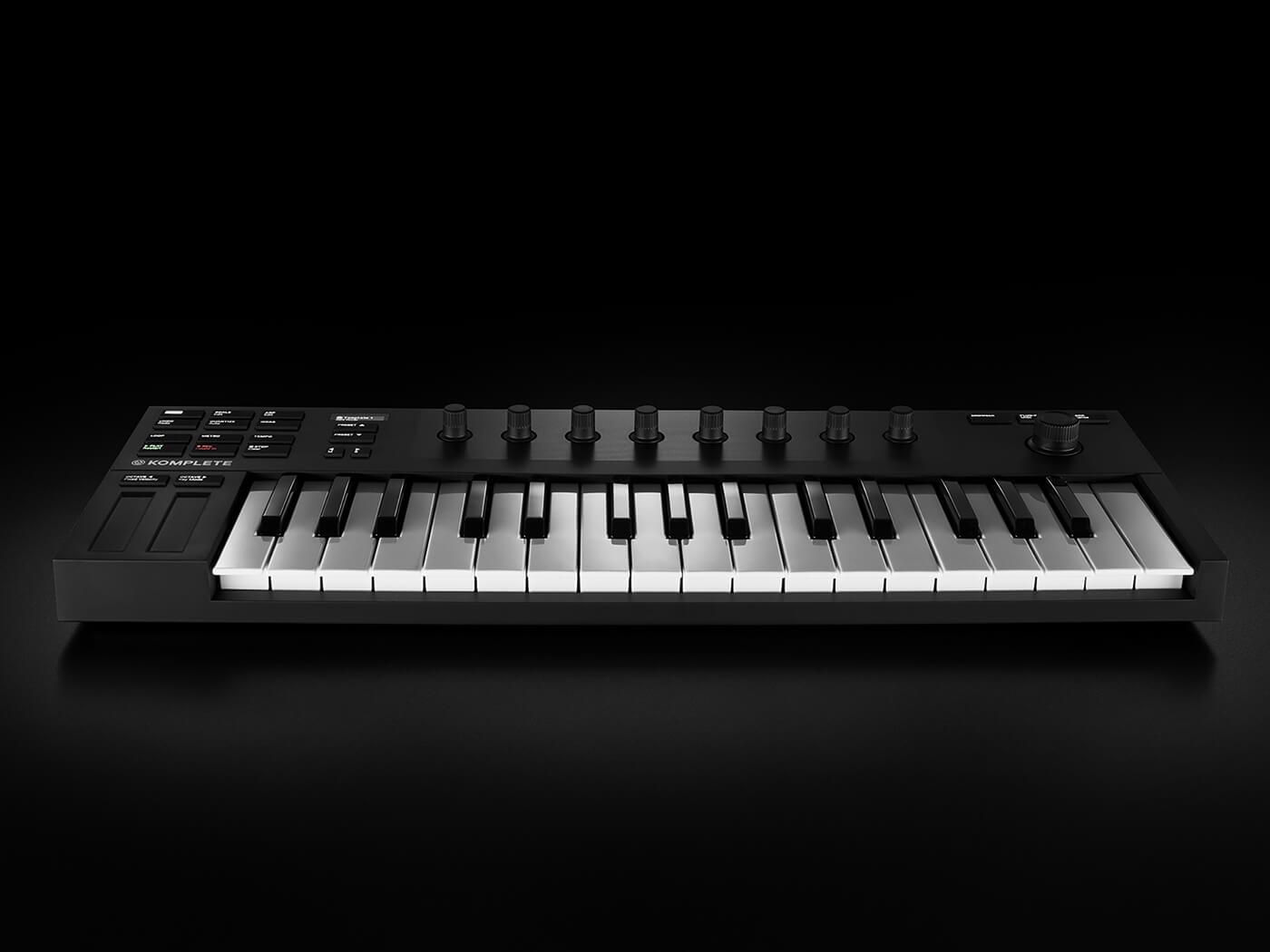 It only seems like a couple of months since I reviewed the latest in Native Instruments’ Komplete Kontrol series of keyboards, that being the A-range. Native is on fire at the moment and seemingly intent on driving the entry price point to music production down to affordable levels. The A49 I tested is streeting at just £149 and you get a full suite of NI software bundled in with it, plus the reassuring feeling that your keyboard will bring the best out of that software using the NKS standard.

This Native Kontrol Standard is Native’s way of integrating its ever-cheapening hardware with it and third-party software, with hardware controls automatically assigning themselves to much-used software parameters, thus making the whole software-hardware thing very seamless.

You’d think that £149 for a piece of hardware that controls a bunch of great software is a great price, and I certainly did, concluding that: “You get a full-sized keyboard, a bunch of high-quality plug-ins and a great conversation between the two of them. I’d buy that for less than 200 quid.”

But just when you think it couldn’t get any better, along comes the M32, and it’s cheaper still! Just £99 gets you the keyboard, and yes, there’s even a bundle of instruments and other software thrown in; not as good as with the A-Series, nor a patch on the full suite of KK software, but it’s still one heck of a lot of hardware and software for just two figures of cash…

How? Why? What the heck!

When we first encountered the M32, I bemoaned the fact that it used to cost newcomers a fortune to get into music production, and now you can do it for very little money. This is a fantastic sea change. The big gain for NI has to be that newcomers to music-making will forever worship the company for making their entry-point so cheap, and then upgrade to NI’s vast suite of other software by way of thanks. Whichever way you look at it, some shortcuts must have been made, right?

Unboxing M32, you start to believe that to be the case, as initially you feel like you are unboxing nothing, it’s so light. It’s only a 32-note keyboard and combined with smaller keys, it covers a very small footprint and is as light as a feather. Both are great if you are carrying the keyboard around and have only a small amount of desktop space, of course, and lighter does not necessarily mean flimsy. It actually feels okay in terms of build – plastic, yes, but also very solid. 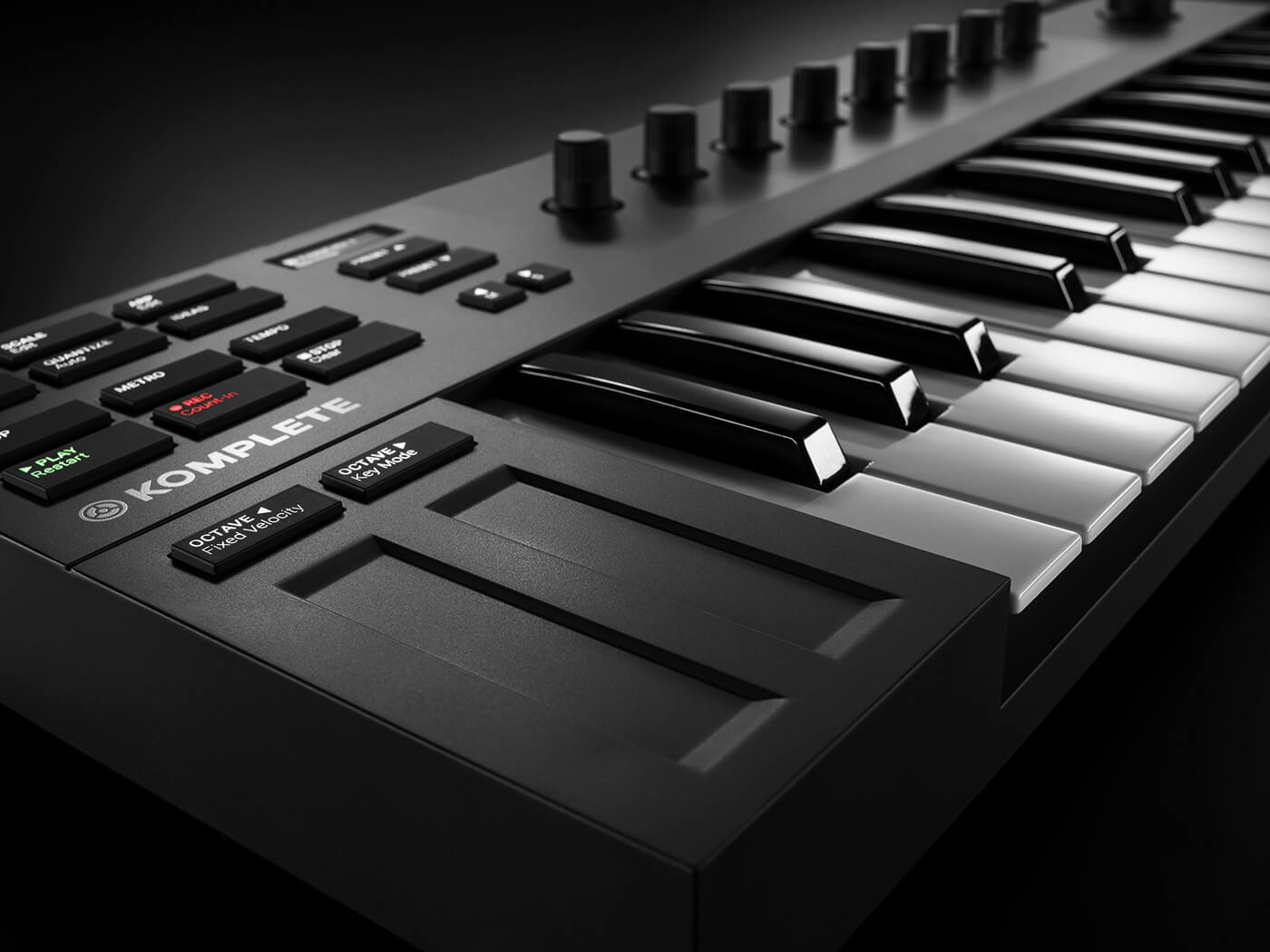 The most incredible thing is that it packs in pretty much all the buttons and rotaries that you get on the more expensive A-Series keyboard, only lacking ‘proper’ pitch and mod wheels, these being replaced with touch strips. This means you get all the transport, select and navigation areas, plus the eight rotaries. There’s a Shift button to double up functionality but, of course, you don’t get the glorious Light Guides as found on the full-fat S-Series, those lovely colour LEDs that lit up the keyboard keys.

The actual keys on the M32 also lack the size and playability of both S- and A-Series, but they’re suitable for newcomers and reasonably playable, especially in a world full of synthesisers that seem to be adopting touch keys over real keys to keep costs down. You also get a single screen on the M32, just like on the A-Series, so I’m guessing, then, that operation is going to be very similar between the two. The real cuts must, therefore, must have been made in the software bundle, then, right?

I almost feel relieved when I discover that, yes, there is less software bundled with M32. Aha, so this is the chink in its armour. But then it’s still a pretty decent bundle. You get the Komplete Kontrol software that lets you home in and manage particular sounds and instruments, plus you also get the all-new Komplete Start, a bundle of sounds and instruments that now comes as standard with any KK product.

It includes 2,000 sounds and a bundle of 17 instruments and effects including the great Carbon, Mikro Prism and four Reaktor Player instruments. Add the Monark and Reaktor Prism synths, the Scarbee Mark 1 piano and free time on Sounds, plus a £22 voucher to the NI shop, and you’ll agree that it is quite a bundle for £99, with a keyboard thrown in! 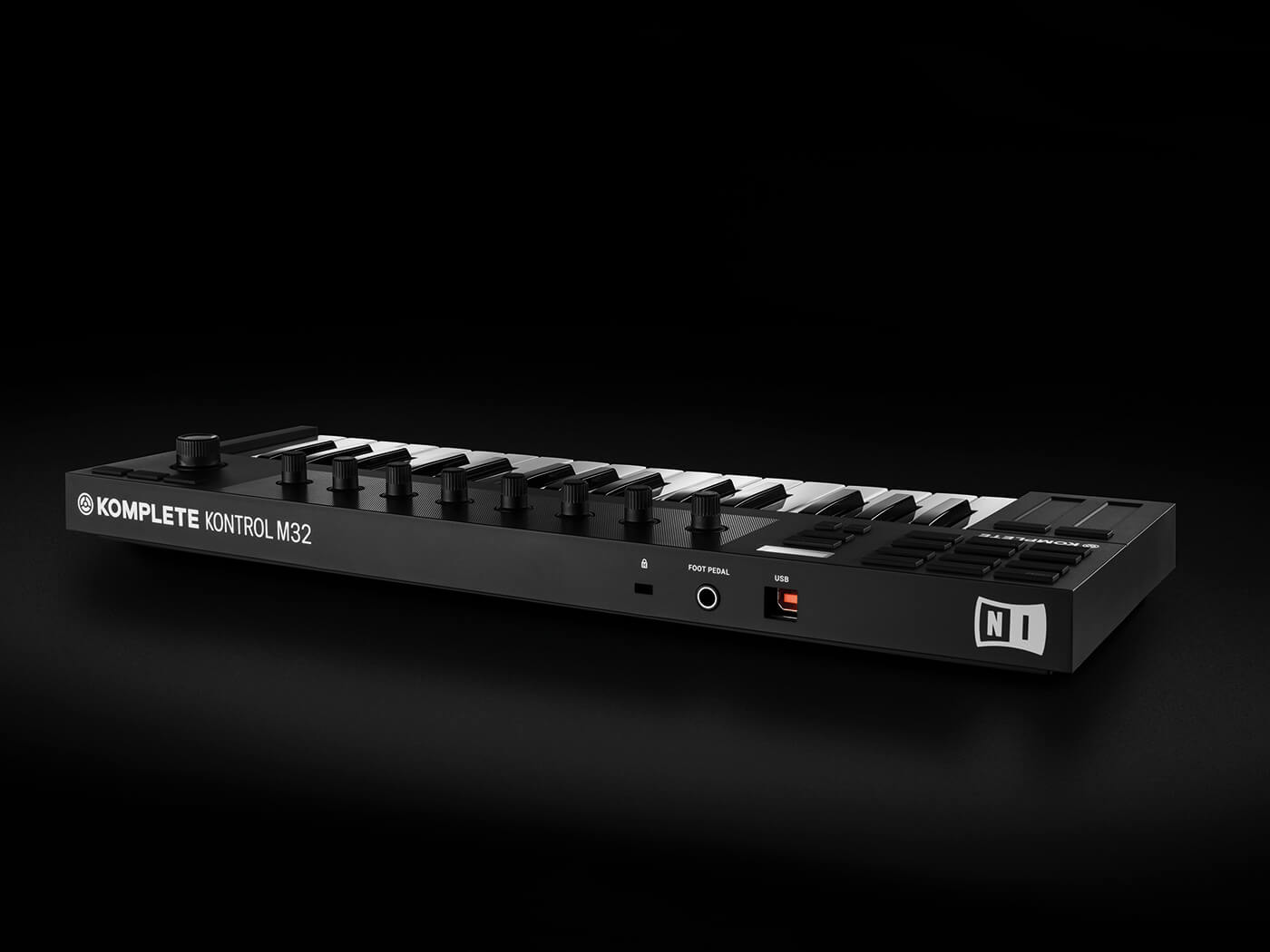 With the A49, the keyboard automatically assigned itself as a controller in Logic, at least after updating the KK software in Native Access. M32 didn’t quite offer such a seamless experience – I did need to update its firmware and wrestle with Logic’s control surface setup, but it was soon up and running. And I can confirm that M32 quickly slipped into NKS mode, where you home in on a sound type and the KK software presents you with your options among whatever NI instrument you have installed.

You then choose a preset and its important guts are assigned to the keyboard’s controllers. In no time, you are tweaking parameters, and their names are displayed on the M32 screen as you alter each knob. Hey presto, that familiar NKS hardware software blurring is with you – absolutely brilliant, and for less than 100 quid. I think back to those heady days when I reviewed the original S-Series and wonder how I would have reacted knowing you’d eventually get the experience for such a small outlay.

I should also add the DAW control bonus. I say ‘bonus’, as I wasn’t expecting the integration with Logic last time and you get it again here. The transport buttons control your DAW and you can adjust channel volumes, mute and solo, and a lot more, all from the keyboard. Do check your own DAW compatibility on the Native Instruments website if this is important to you. If you wonder why I seem to be mentioning it in passing, to my mind, it’s the NKS experience that is the main draw here – and getting it so cheaply, combined with the ability to control your DAW is really the icing on the cake.

Of course, as with the A-Series, M32 lacks many of the features from the complete Komplete Kontrol experience: for example, the touch strips, the lights and all the software titles in the free bundle. However, this keyboard is so obviously aimed at beginners to music production that this probably won’t matter one iota. I’d also like to add that, personally, I’d be tempted to spend a whole 50 quid more and upgrade to the A49 I tested a couple of months back, just for the extra keyboard goodness and some extra software. That extra cash is minimal really, compared to what you get.

That said, the M32 is ridiculous in terms of bang for buck. The keyboard is perfectly usable – especially if you are not a player, as such – the software is great and it delivers the complete NKS experience. And as the marketing pictures on the NI website prove, it probably just about wins it over the A-Series in the portability stakes, too – it really is very backpack-able.

For three decades, I’ve documented how the price point to entry for music production has tumbled. It’s been much to my own pretend annoyance (yes, I really did pay over a grand in 1989 to get up and running), but you now have to admit that there isn’t any excuse for everyone not to be making music with technology and in that regard, Native Instruments’ M32 is a milestone product.

If ever I could easily write an answer to the question ’Do you need this?’, it is now. Simple: ask yourself whether you are starting out in music production and if you have a minimal studio. If the answer to both questions is ‘yes’, then get this keyboard (or any of the A-Series come to that) and you’ll be enjoying a fantastic hardware and software combo, and then making music from the off with Live Lite, too. 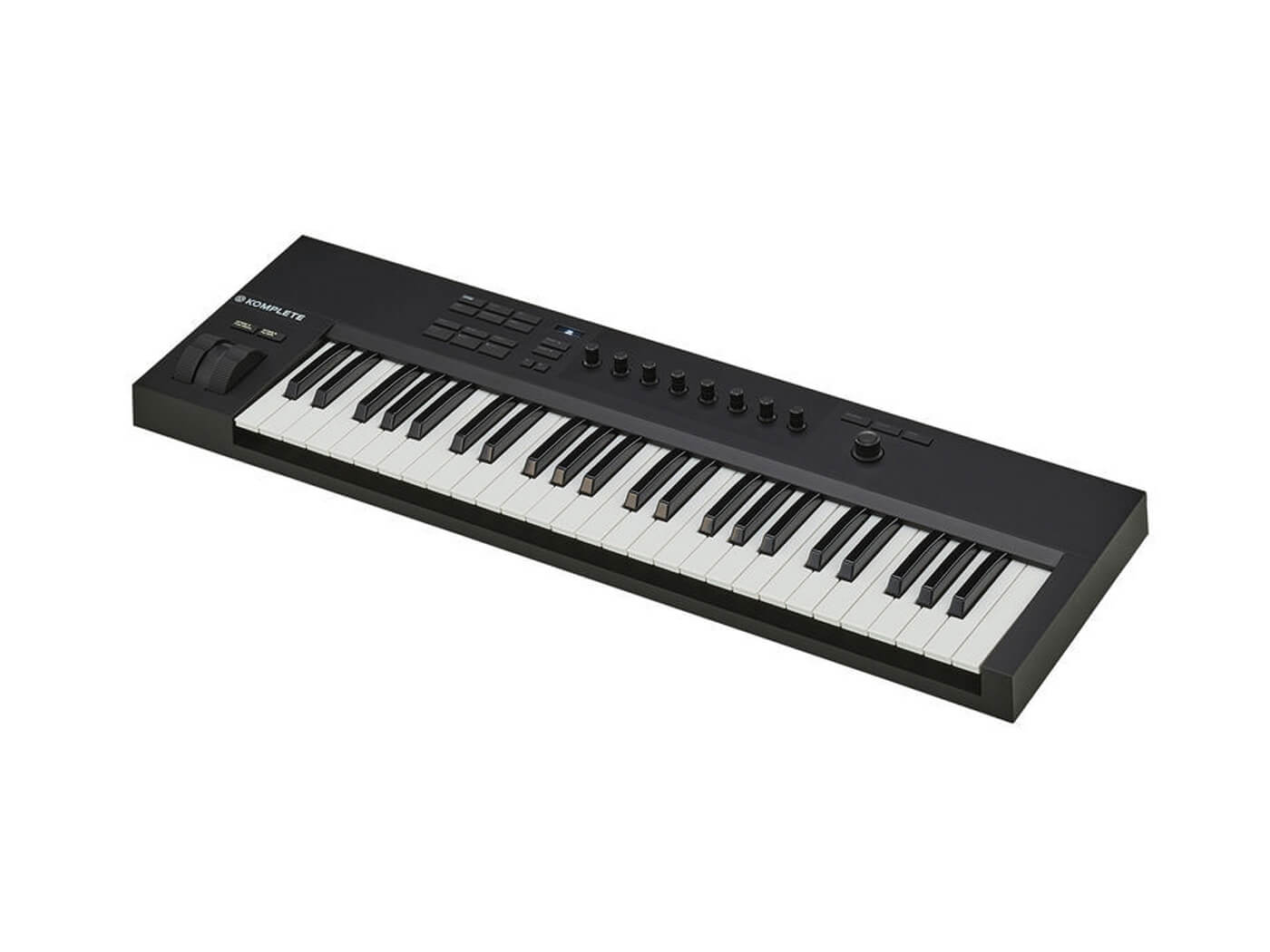 Native Instruments
Komplete Kontrol A-Series
£149 (for the A49)

Normally, I’d throw in the Akai Advance series as a direct alternative to the KK, but really the A-Series by NI is more a competitor, as it’s only slightly more expensive, and you do get worthy extras. 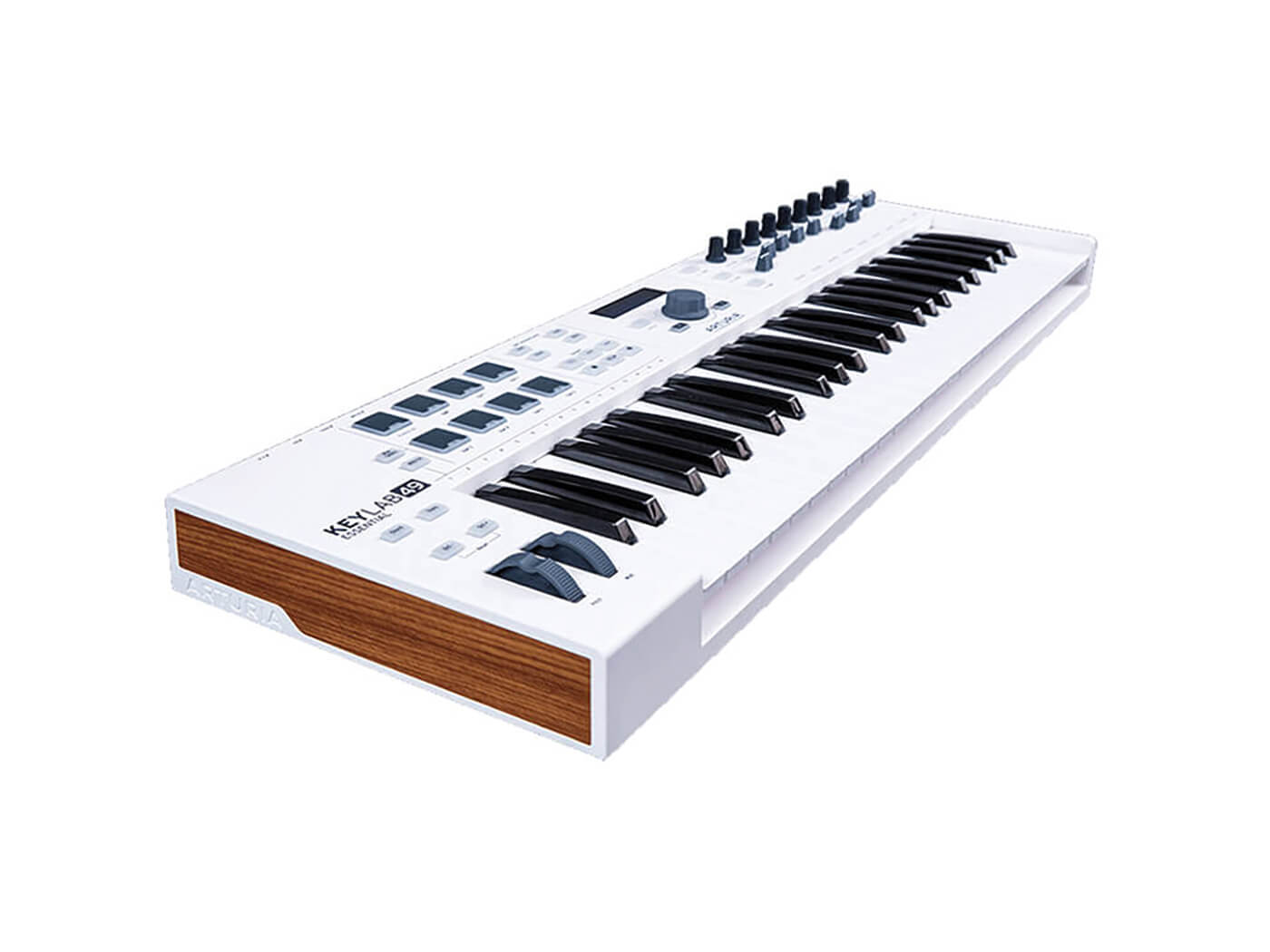 This is possibly the closest thing you’ll get to a great hardware/software bundle. Classic sounds – and around 5,000 of them – from Arturia’s library of instruments, plus a very decent controller all for silly money, really.