Is Native Instruments’ Action Strikes the last word in trailer-music percussion? We pick up our sticks.

Strike Force
Action Strikes comes as three .nki files carefully scripted to exploit the power of Kontakt 5.3.0. Arguably the most impressive and complex offering is the Ensemble instrument, which is designed as a means of building complex percussion sequences using a battery of percussion players. Rather than pre-recorded loops, the so-called Rhythm Sets that power Action Strikes are actually Kontakt scripts, triggering individual multisamples of the respective instruments. 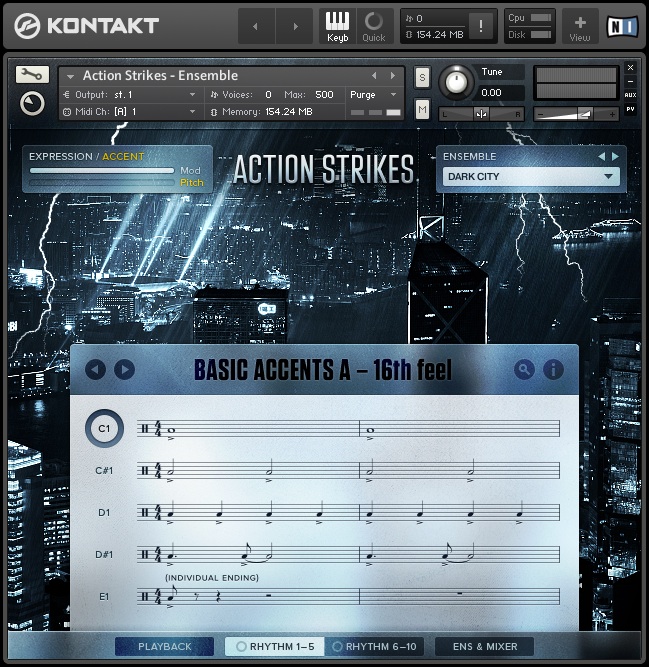 Thanks to these scripts, Action Strikes is incredibly flexible with tempo, displaying none of the unwanted time-stretched artefacts you’d usually associate with an audio loop.

Take a look under the Ens & Mixer tab and you start to understand the concept behind Action Strikes’ Ensemble .nki. The Ensemble is divided into three groups – Low, Mid and High – which are combined and layered to produce the ‘percussion battery’ effect. The Low group, for example, could consist of thundering Taiko drums and the Mids some driving toms, while the High group covers instruments such as shakers and other high-pitched percussion. The patterns themselves are triggered via a MIDI keyboard, with the octave around C2 triggering the full ensemble and the respective octaves above (C3, C4 and C5) triggering the Low, Mid and High groups individually.

Percussion Cap
In use, the Ensemble instrument is impressive, if a little extravagant on CPU usage. Because of the wealth of Rhythm Sets available (with an impressive number of unusual time signatures) and the ability to switch instruments in the respective Low, Mid and High groups, it always feels that you have plenty of creative input on the output – something that isn’t always the case with phrase-based libraries.

Indeed, once you’ve mastered aspects such as on-the-fly pattern switching and using the modulation and pitchbend wheels to change the dynamic levels, Action Strikes feels more akin to conducting your own percussion section. 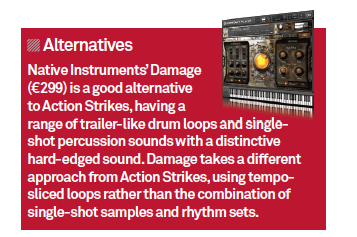 Rather than locking you into the Ensemble approach, it’s pleasing to see Action Strikes offering some alternative ways of working with the other .nki files. The Instrument .nki, for example, works in a similar way to the Ensemble, but rather than comprising three sections it’s designed to work with just one instrument group. The Instrument .nki, on the other hand, is a great way of spreading some of the CPU load across multiple cores, as well as offering more creative potential in how you decide to layer the various groups. Finally, the Hits .nki provides straightforward access to individual hits and articulations, allowing you to build your own patterns and percussion sequences from scratch. 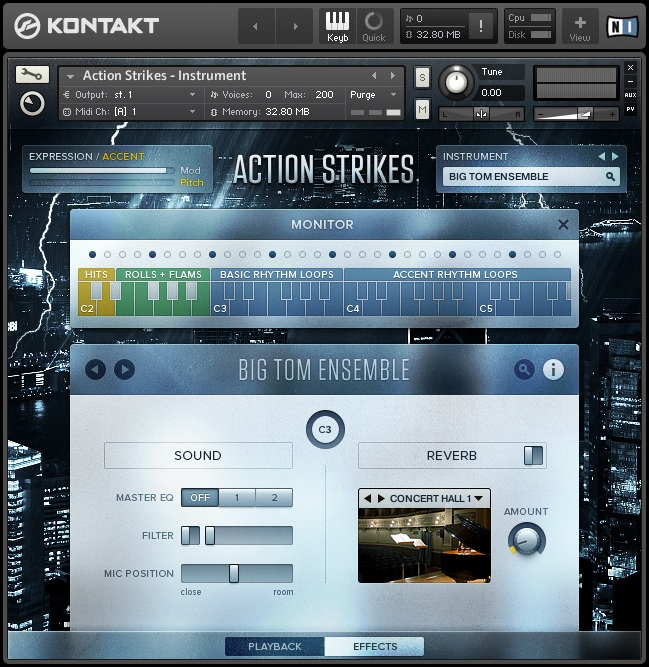 Slave To The Rhythm
Action Strikes is easily Dynamedion’s finest work to date, and arguably the best exponent of the company’s unique phrase-based approach. From the quality of the recordings through to the ingenuity of the scripting, Action Strikes is a product that really understands the needs of its target audience, producing fantastic results with plenty of ‘tweakability’ and user input.

While it might lack some of the textural and sonic diversity of libraries like Damage, Action Strikes’ inherent flexibility with tempo means that it sounds consistently powerful at whatever speed the rhythm plays. All things considered, therefore, it’s a powerful rhythmic tool that few media-based composers will want to be without. 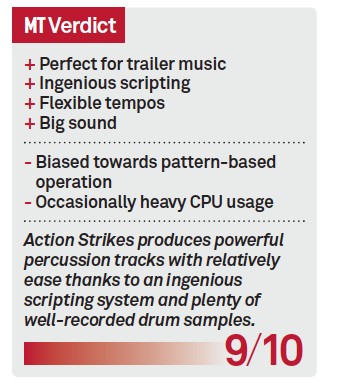 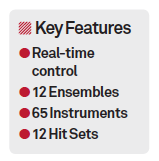