There’s a steadily growing number of desktop-based audio interfaces being released at the moment. Designed for use in the studio and on the move, connectivity is via a loom cable that plugs in at the rear. RME, MOTU, Apogee, Focusrite and now Alva all offer these styles of interfaces and the Nanoface draws obvious influence […] 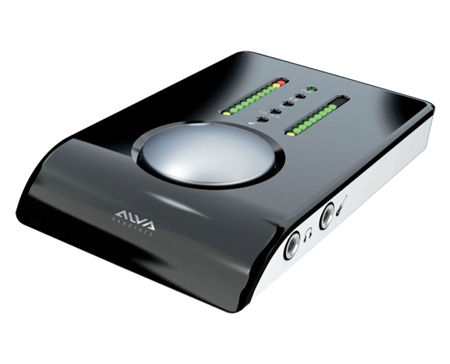 There’s a steadily growing number of desktop-based audio interfaces being released at the moment. Designed for use in the studio and on the move, connectivity is via a loom cable that plugs in at the rear. RME, MOTU, Apogee, Focusrite and now Alva all offer these styles of interfaces and the Nanoface draws obvious influence from its more mature relative, the RME Babyface. Alva is a partner company to RME, so that’s no surprise in terms of the looks, but what exactly do you get when the price is as low as this?

The Simple Life
The online blurb and manual make it clear that this interface is primarily designed to be easy to use, omitting features such as onboard mixing and DSP to keep the learning curve shallow. As Alva points out, such things can be found or achieved within your DAW, and the limited feature set means there’s less for a beginner or fast-working musician to learn. This does make sense, but it also means that you need to run projects that are light in terms of processing demands to achieve low-latency monitor processing. This is actually good practice anyway, so we have no gripes there.

The Nanoface has a slick black finish but it looks and feels quite plasticky. It’s small and fits easily in one hand but the rotary encoder doesn’t  feel pleasant to use. The recess for your finger is small and you need to move your whole arm to stay with it as it rotates due to its size – not the best-feeling data controller in the world, but again, at this price, something has to give.

Another issue is how light the unit is, as the loom just wants to pull the device off the surface it sits on. This isn’t unique to the Nanoface, though, and we’ve found the same issue with all desktop units we’ve trialled to some degree. The workaround is to add support for the weight of the loom by either running it across your desk, which looks messy, or adding a fixing spot such as a cable tie to your desk so it can be physically restrained. 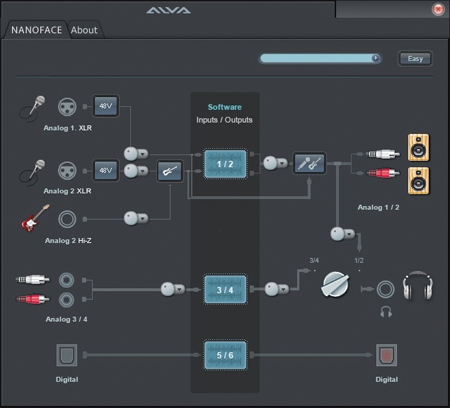 At the time of the review we only had hands-on control for input and output parameters from the central dial. A software control interface is on its way soon.

More Out Than In

Connectivity comprises a 1/4-inch headphone socket, Hi-Z analogue instrument input and optical S/PDIF in/out. The loom hosts two phantom-powered XLR inputs, with input two being sacrificed when using the Hi-Z input. A further two inputs are available in RCA form and the master 1+2 outputs are also RCA. S/PDIF and the headphone socket can be sent their own output signals, though, which is handy for a DJ setup or for creating a mix from your DAW for monitoring. Five-pin MIDI connections come in a unique offering of one in and two outs, a handy addition for live performance situations, enabling you to sync with other computer-based performers.

Dialling In A Session

Setting up is a simple driver installation as all control is via the single encoder. This is quite easy to pick up, although the cycling nature of navigating through input and output choices gets a little tedious at times. Audio quality from the mic inputs is clean, and nasty frequencies that can sometimes be heard on cheaper devices were absent. The Hi-Z input, however, was much lower quality, having a surprisingly thin sound. That’s OK if you plan to record electric guitar, but it was impossible to capture a good bass guitar sound.

Good MIDI IO for live use

Although the build quality of this device isn’t the best and its instrument input isn’t great quality, it is very compact and comes with good mic preamps for the price.