Mutable Instruments has an exceptional reputation for Eurorack Modules that venture outside of the norm. Dave Gale takes a look at Rings, to see if it resonates… Details Manufacturer Mutable Instruments Product Rings Price £249 Contact via website Web mutable-instruments.net Let’s face it, the French have been on a bit of a roll, electronic-musically speaking, […] 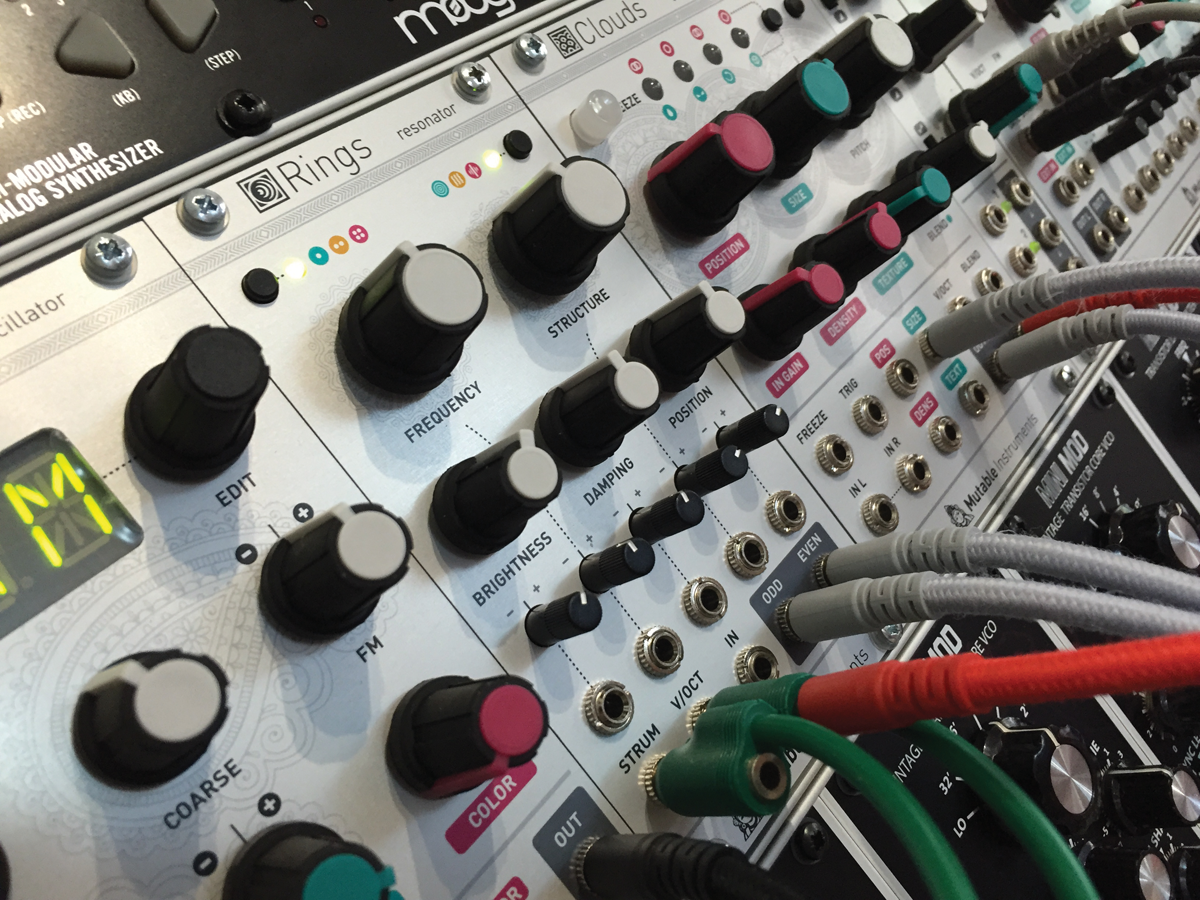 Mutable Instruments has an exceptional reputation for Eurorack Modules that venture outside of the norm. Dave Gale takes a look at Rings, to see if it resonates… 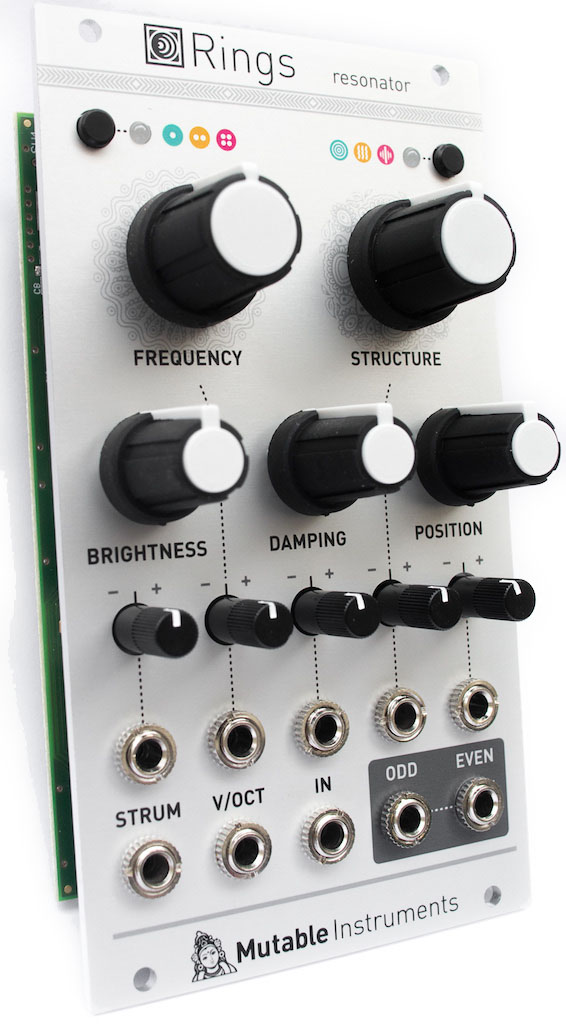 Let’s face it, the French have been on a bit of a roll, electronic-musically speaking, for some years, and have always managed to come up with a slightly different musical angle. Think JMJ, to Air, to Daft Punk, and you’ll immediately know what I’m talking about, but taking the Eurorack mantle to another place is another area of creativity altogether.

Enter one Olivier Gillet, who is the brains and technical force (and many say genius!) behind Mutable Instruments, based in France. Like his musical counterparts, Olivier and Mutable are also on a roll, with a growing clutch of exceptionally versatile modules that deliver something very different from the norm.

Sound Holes
Rings is billed as a ‘Resonator’ module for Eurorack. What’s a Resonator, then? Well, think about a drain pipe or sheet of metal when you strike it, or the hole on an acoustic guitar, backed by its body. In the case of the guitar, the body of the instrument is essentially an amplifier and resonator, allowing the sound emitting from the sound-hole to resonate the guitar strings in sympathy.

In fact, back in 1928, a French company called Ondes invented a legendary electronic instrument called the Martenot, which exploited this idea to the max. One of the four speaker units that operated with this electronic keyboard was called the Palme, and consisted of a speaker cone, fronted by strings, which would resonate in harmonic sympathy to the notes being produced, offering a beautifully magical effect.

While I didn’t come across any mention of the Martenot in the Mutable product detail that accompanies the Rings, I would put money on it that this was an influential factor in this design, as we will see later.

Madame Palme
Time to plug up and see what this module can do. Mutable suggests that three connections are made to get the most from Rings; a trigger connection to ‘strum’, a pitch CV to control note pitch and an Audio signal to create an ‘excitation signal’.

However, if the latter is not present, the Rings will use its own excitation tone, the source and shape being dictated by the selected resonator type. There is a choice of three resonators; Modal, Sympathetic Strings and Non-Linear/Inharmonic Strings, with each of the tonal characteristics of these resonators being controllable from five pots, which adorn the front of the module. All five are available to CV control.

Beginning with the ‘Modal’ resonator mode, and using the internal oscillator as an excitation signal, I was immediately struck (no pun intended!) by some very metallic bell-like tones, which had a hint of FM about them.

With plenty of control available, I immediately started tweaking, to great effect. Being bell-like, the ‘Damping’ control is excellent for changing the decay tails of the resonance, taking it from a quick thud to a wide-open chime.

It was now that I reached for the ‘Polyphony’ control, which essentially allows the resonant tones to ring on, creating chords of up to four notes, if applied. This is switchable from single tone, to two or four notes, and very effective it is, too – you’ll be swimming in resonant chords aplenty!

Moving on to the next mode, I enabled Sympathetic Strings (you remember the Ondes Martenot Palme I mentioned earlier?) Once triggered, the resonant tones can ‘ring on’ in harmonic sympathy, which is an entirely moveable feast, thanks to the Structure control, which steps the harmonics up and down.

This is quite stunningly beautiful, and thanks to a little LFO CV control, can sweep through the sympathetic overtones while being strummed. In essence, this mode uses Comb Filtering to allow tones to ring on, reminding me of other comb filters I have used in DAW-based rigs.

The final mode, Non-Linear/Inharmonic Strings, is more abstract and abrasive! This is the joker in the pack that will resonate in a full, chaotic manner. It can be highly colourful, but depending on your music making, debatably less useful. 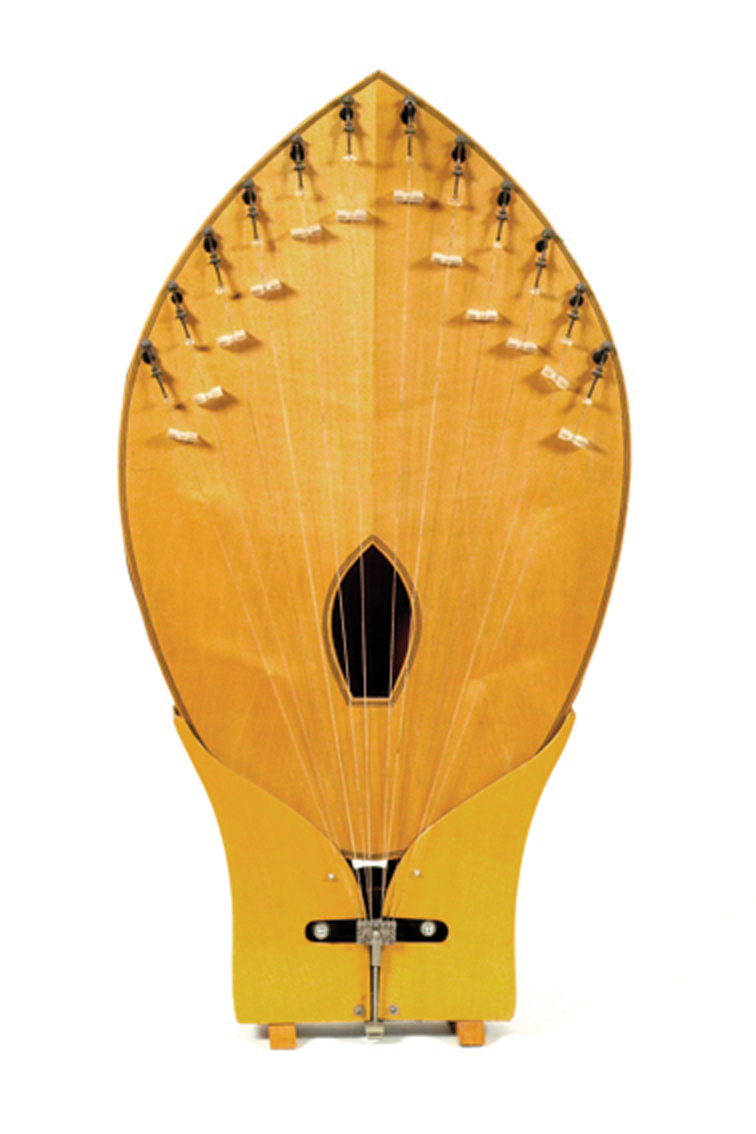 The Ondes Martinet Palme Diffuser had sympathetic strings that resonate, much like the mode on the Rings

External Signals
As mentioned earlier, this module has an inbuilt oscillator, which kicks into life if an external oscillator is not present. However, in my noodlings, I found that the best external signals to use to excite the resonator were digital and harsh.

Alternatives
It has to be said, this module is pretty unique, with the closest units with any resemblance being Comb Filter-based designs.

So in that regard, the Analogue Systems RS-120 is a pure Comb Filter, but – unlike the Rings –offers a single operation. The Snazzy FX Tidal Waves, on the other hand, offers numerous modes of operation, one of which is Comb Filtering. The Rings certainly seems to stand alone, and very tall, as one of a kind! 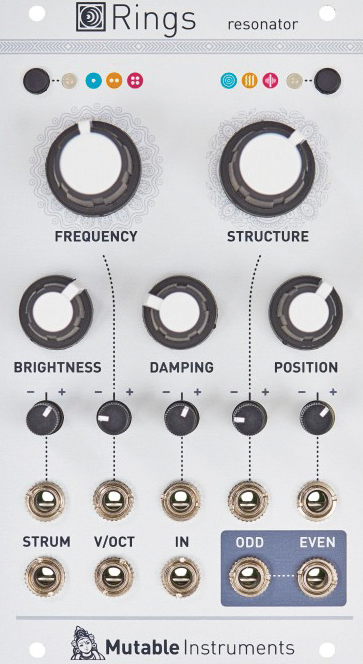 Above: Top line (alongside coloured icons): two buttons allow for amount of resonant polyphony and mode of resonance, indicated by the coloured LED

Middle line (alongside five pot/knob controls): plenty of real-time control, via five dedicated pots. It’s irresistible to get stuck in and have a tweak

Bottom line (alongside jack sockets):
Apart from the obvious inputs and outputs, all of the controls are available to CV, which opens up a whole world of possibilities

Do I Really Need This?
If you are into pure electronic EDM-style production, this is probably not a unit that will interest you. However, if – like many of us Eurorack folk – you like to tinker and find new and interesting sounds, this is absolutely something to explore.

It will add a really interesting tonal colour to your existing timbre in your Eurorack, and can give hints of acoustic and the otherworldly in one device.

Conclusion
The Rings will not be for all Eurorack users, and in common with many other Mutable modules, certainly requires a degree of effort to learn to get the best from it, but when you do put in that time, the results can be quite stunning. Along with much of the Mutable Instruments line, Rings can bring a hint of the acoustic to an electronic world, and that can be quite magical. 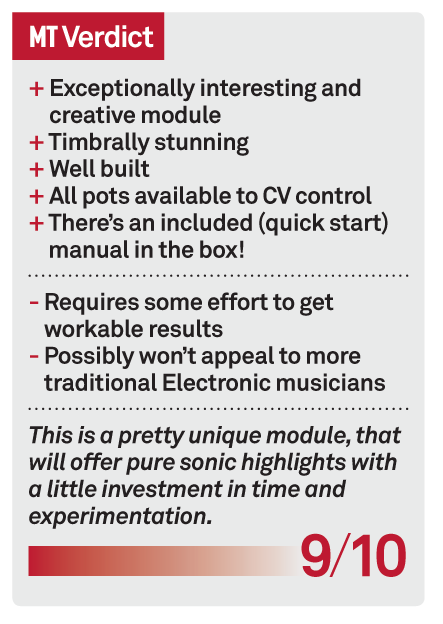