The godfather of synth design repackages a pair of semi-modular synths, but are these bundles greater than the sum of their parts?

The monstrous Moog One, hand-built Moog Modular and Model 10 may be beyond the reach of most, but Moog’s ongoing interest in smaller semi-modular instruments has allowed the company to cater for more modest pockets. These semi-modulars also cater for the sound designer seeking something rarely found in software: a serendipitous moment where a pot twist, switch flick or patch connection leads to musical magic.

This increasingly unconventional semi-modular series began with the Mother-32. This all-in-one successfully combined a simple but recognisable Moog analogue synth with a programmable sequencer, 28-point patch panel and MIDI control. And to cater to a broader audience, it had a desktop footprint that was compatible with Eurorack setups.

Next came the DFAM, made for rhythmic analogue percussion sequencing, and then the Subharmonicon, a so-called polyrhythmic analogue synthesizer that’s quite unlike any other self-contained synth on the market. 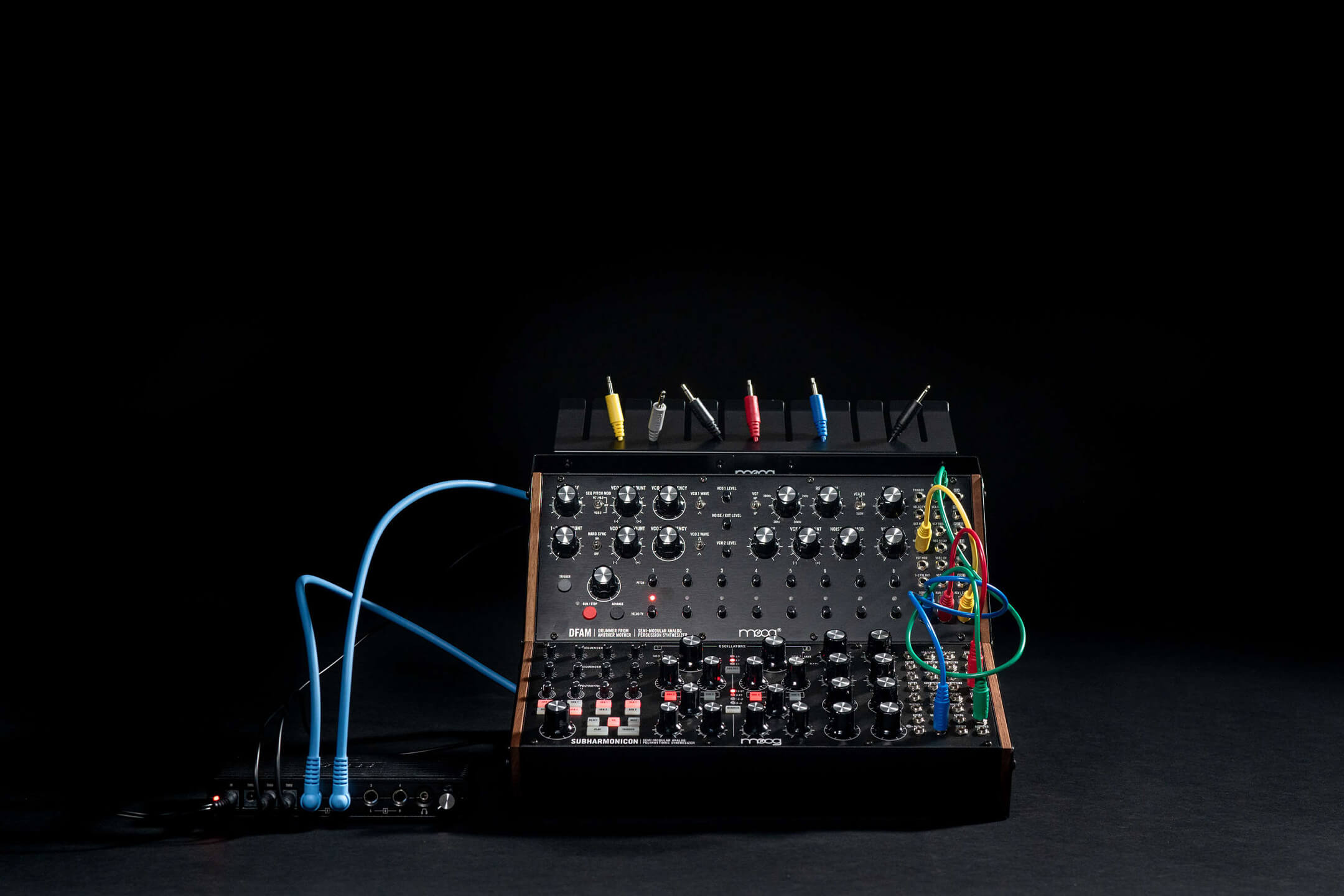 There are two versions. One pairs the DFAM with the Subharmonicon, and the other bundles the DFAM with the Mother-32 (we’re reviewing the former). Both bundles augment these semi-modular pairings with a few other vital accessories. The intent, according to Moog, is to present the ‘complete synthesiser studio experience’ – just add headphones.

To get you making music immediately, accessories comprise a racking system, mini-mixer, patch cables and patch book. There’s also an all-important screwdriver, two dice, a pop-up dice game, artwork, stickers and a drawstring accessory bag! Moog packs all this into a box that begs to be opened, and whether you are a synth novice or hardened patch fiend, the charm and allure of all this will no doubt win you over before you even make a sound.

Aesthetics aside, a setup such as this will only succeed if the sonics are convincing. After building the rack and plugging both synths into the included mixer (which also serves as a power distribution unit for the modules) we press play on the Subharmonicon. It’s easy to produce a simple and satisfying four-note sequence, and to add movement by tweaking the low-pass filter and basic attack/decay envelopes. So far, so fun, but if this is all you want from a desktop synth setup, there are many other options available.

What sets the Subharmonicon apart – and where it becomes far more interesting – is in exploring the sequencing and oscillator sections. Both take influence from much earlier analogue instruments. The sequencer is based on the Rhythmicon, a 1930s proto drum machine designed by Leon Theremin. Meanwhile, its oscillators take inspiration from the Trautonium, an early electronic instrument from Germany that used sub-oscillators to generate frequencies by dividing (not multiplying) the frequency of the main oscillator.

The Moog Subharmonicon features two parallel oscillator sections, each with a main VCO and two adjustable subs. The two four-step CV sequencers become more complex when combined with the four onboard Polyrhythm controls. Each sequencer can control the pitch of its associated oscillator and subs. However, here’s where things go a little bananas – you can enable or disable pitch sequencing for each. The result is that the sub can either politely track the pitch of its master VCO, or be set to constantly change its relationship to the VCO, based on the current step level. Things go deeper still when you start to adjust the rhythm controls, which each divide the current tempo by a whole number (from 1 to 16) and act as an additional trigger for whichever sequencer track they are controlling. The rhythmic results range from straight four-step patterns, through to bouncy ratcheted grooves, to full-on mayhem. To achieve this kind of madness in a standard modular rig, you’d need several sequencers, clock dividers and other modules.

Even with the oscillators used conventionally, this is a lot of fun and creates synth lines that belie the limitations of having only four note values per sequencer. Adding sequenced sub-oscillator frequency division into the mix can lead to a stupendous cacophony or intriguing and unexpected tones. It’s certainly quite different from conventional ways of sequencing pitches. Again, you would need a relatively complex modular setup to achieve anything similar.

By default, the Subharmonicon quantises pitches to one of four tuning systems, and across three pitch ranges. This solves the problem of trying to fine-tune sequencer CV settings, a process that can quickly suck the fun out of creating musically useful material on some analogue systems. It’s a shame there is no obvious way to use one sequencer to provide transpose offsets to the other. Also, even with 32 patch points, there is still no way to turn incoming MIDI into a pitch CV source, though it is wired internally to do this. It would have been great if the tempo control acted as a clock divider for incoming MIDI clock, too.

Compared to the Subharmonicon, the DFAM (Drummer From Another Mother) feels almost basic. However, once again, Moog has repurposed some conventional building blocks into something a little different. Two eight-step sequencers, two VCOs, two decay-only envelopes, a noise source and a switchable 24db/octave low/high-pass filter combine to create a sequenced drum/percussion generator.

When we previously used the DFAM, it shone when connected to other drum machines creating more complex rhythms. The pairing with the Subharmonicon enhanced the potential of both. You can now patch the Subharmonicon sequencer to create complex rhythms on the DFAM, while the DFAM sequencer could mutate the polyrhythmic divisions at each step. Alternatively, you can combine the oscillator sections of both for a monstrous wall of detuned multi-harmonic fun. You could also roll off the low-end of the Subharmonicon using the DFAM filter in high-pass mode. The fact is that with so many ways of connecting the two, the possibilities multiply enormously.

Moog has taken an unconventional but fulfilling approach with its Sound Studio bundles. Synth veterans will appreciate the flexibility and, and for newcomers, it represents an approachable way into modular synthesis.