A great piano is the holy grail of virtual instruments, and Pianoteq seems to do it without using samples. Hollin Jones is impressed in this Modartt Pianoteq Pro 4.5 review.. Amazon.co.uk Widgets Conventional wisdom has been that the only way to emulate some instruments in a believable way is to use samples as the basis […] 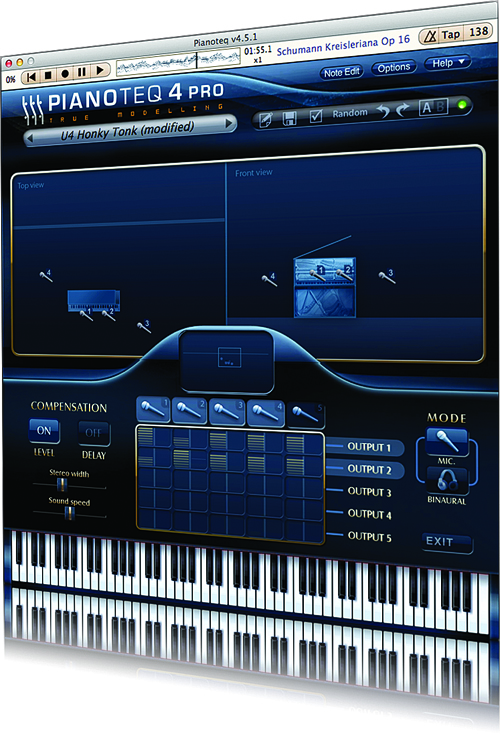 A great piano is the holy grail of virtual instruments, and Pianoteq seems to do it without using samples. Hollin Jones is impressed in this Modartt Pianoteq Pro 4.5 review..

Conventional wisdom has been that the only way to emulate some instruments in a believable way is to use samples as the basis of the virtual instrument. Guitars, brass and pianos are probably the most obvious examples of instruments that have been successfully re-created in software form using large, multi-GB core libraries to capture the many nuances and intricacies of their character. This wisdom was challenged, arguably even disproven, when French developer Modartt came up with Pianoteq, a very different kind of virtual piano that really did sound like a real piano while having a tiny footprint of just over 20MB.

Core Technology
The key to Pianoteq’s believability is in its physical-modelling technology and some presumably terrifyingly complex mathematics and algorithms which are hidden from the user. The appeal of an accurately modelled piano that uses barely any space on your computer is clear: you don’t have to worry about eating up valuable hard drive space on laptops or carrying round additional drives to host libraries.

Version 4.5 makes some under-the-hood changes to the audio engine and various other tweaks including the addition of the new Condition parameter, a really handy slider that lets you ‘age’ a piano on-the-fly. The Pro version also includes the new U4 upright piano module.

Pianoteq comes in three versions: Stage, with all the patches but no sound tweaking capabilities; Standard, with many of the patch editing parameters; and Pro, with the full complement plus support for up to 192kHz operation. Although the presets are excellent, it’s the near-infinite tweakability of any patch that really makes Pianoteq stand out, so if you are serious about shaping your pianos, the Standard or Pro versions would seem like the ones to look at. Demos of Stage and Standard are available.

Tinkle the Ivories
After a quick download and a simple installation and authorisation procedure you’re up and running. Pianoteq generates its sounds using synthesis so it’s perhaps a little more processor-intensive than some other virtual pianos, but far less RAM-intensive because it does not use samples. A multi-core CPU is recommended, and the memory footprint is apparently a miniscule 256MB, so it will run happily on any recent computer, including ultra-portables such as the MacBook Air. You can manually set the maximum polyphony all the way up to 256 notes, but on a three-year-old MacBook Pro we weren’t able to make it stutter, even with lots of complex sustained playing.

It runs as a standalone app or a plug-in and in standalone mode lets you assign audio output and MIDI inputs as well as buffer sizes and advanced MIDI CC input mapping for sustain and other pedal types. You’re also able to manage your add-ons here and magnify the interface to varying degrees, which is useful for dealing with multiple screen resolutions. The very top part of the window contains a MIDI file player, which is handy for auditioning or practicing parts, as well as a metronome and tap tempo option. Below this is the preset chooser where the different piano models and variations can be selected, as well as file operations, a random piano generator button and an A/B button for comparing patches.

Thanks to the physically modelled nature of the instruments – a range of percussion, electric piano and obscure historical keyboards are available too – it’s possible to have complete control over any sound. The upper section of the app deals with sound-shaping, starting with tuning then moving on to voicing, where you can control hammer-action, position, hardness and more.

The third section is for altering the physical characteristics of the sound board, string length, sympathetic resonance and other criteria. These work very well and you don’t have to be a physics graduate to understand the real-world equivalent of what you’re changing, it’s enough to judge the sounds as you work with them.

Lower down are a load more options, starting with the ability to change the output from stereo to mono, binaural and others, and place up to five virtual mics around your piano using an advanced but approachable system. You can calibrate the dynamics of the keyboard and change velocity curves, and the final section lets you control the action and mallet bounce of the sound you’re generating. You can dial in a master EQ setting and also use the built-in effects, comprising three assignable slots with multiple types plus a reverb with many available presets on offer.

Pianoteq is a remarkable instrument and its pianos and indeed the various add-on optional sounds are breathtakingly realistic. It’s all the more amazing that this is achieved with such a tiny footprint and a relatively low CPU hit. The grand pianos and especially the uprights are excellent, and infinitely preferable to mic’ing-up real pianos or even installing huge library files. The sound-shaping is powerful and accessible, too. For real piano sounds, Pianoteq punches massively above its weight. Highly recommended.

+ Excellent, authentic sound
+ Miniscule install size
+ Low system requirements
+ Huge depth of sound-shaping potential available
+ Easy to use and well-designed
+ Flexible for live or studio use
+ Very good selection of pianos
+ Some great free add-ons
– Some might feel the Pro version is a little costly