Melda is a Czech developer that makes a wide range of plug-in effects which you could describe as being at the more advanced end of things. A quick glance through the product line-up reveals more than 60 models, the latest of which is MMultiBand Granular, a granular resynthesizer plug-in. Resynthesis is becoming increasingly popular, and […] 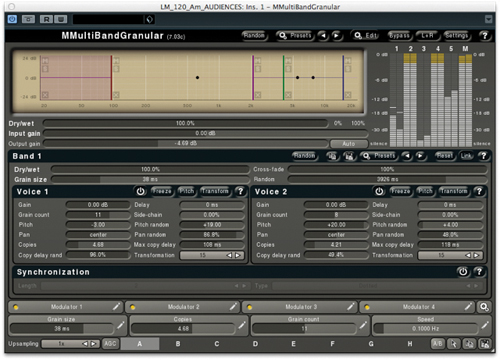 Melda is a Czech developer that makes a wide range of plug-in effects which you could describe as being at the more advanced end of things. A quick glance through the product line-up reveals more than 60 models, the latest of which is MMultiBand Granular, a granular resynthesizer plug-in. Resynthesis is becoming increasingly popular, and is the process of using existing sounds to generate new ones, typically in conjunction with some other clever tools.

The plug-in comes in VST and AU versions for Mac and PC, in both 32- and 64-bit flavours. RTAS support has been dropped, though AAX support is coming in the future. It’s a modest download and licensing is via a keyfile, so there are no dongles to contend with.

The idea is that the effect is applied across any audio signal and cuts your audio into tiny pieces – grains – and manipulates these in different ways to create extreme effects or completely new sounds. It does this using multiple bands and gives you very fine control over every aspect of the processing.

As with most of Melda’s effects, the interface is fairly clinical but it can be customised in terms of colours and the space it occupies. The basic default screen has predefined controls that let you start sound-mangling instantly without needing to understand what’s going on behind the scenes. There is a list of presets down the left-hand side and a Settings menu that provides access to key settings that determine how the effect will behave. The four large dials control Grain Size and Count, Copies and Pitch Range, and there are in and out level meters to the right. It’s claimed that the effect can make lead sounds sound like pads, and add punch to drums, and it’s true that you can do some pretty astonishing stuff with it.

Loading up a drum loop, you can dial in extreme granular delays and bitcrushing-style effects quickly, changing a dry loop into something robotic and mechanical. Applied to an electric guitar riff, it was easy to quickly create harmonic effects as well as pulsating delay effects. An optional X/Y grid lets you draw in how much of each band is used for processing, and each of the bands can have different settings. You can use up to six bands, built on three transparent crossover algorithms with adjustable limits and input gains.

Click into Advanced mode for any of the bands and things get rather more detailed. Everything is controllable in minute detail, from oscillator shapes to the four global modulators that can modulate any set of parameters (including other modulators). These allow the effect to play with time and move around, and each modulator works as an LFO, follower, MIDI/audio-triggered ADSR envelope, a pitch detector or a combination of them all. It’s a very powerful but complex plug-in, capable of M/S, single channel or up to eight-channel surround processing, with smart randomisation features that enter new settings at the click of a button. There’s adjustable upsampling as far as 16x and automatic gain compensation that ensures the output remains as loud as the input.

All of this is fairly advanced but certainly works as advertised. The only slight issue is with the GUI, which while zoomable and customisable can seem cluttered and a little unintuitive. This is a result of two things. Firstly, there are lots of parameters on offer, all of which can be tweaked. Secondly, having a flexible UI almost always means sacrificing a polished look for a more clinical one, since graphics have to change shape, size and colour to accommodate user preferences.

This is an interesting plug-in that’s very attractively priced and has a great deal of depth and advanced technology under the hood. In terms of getting into the details, it’s good for advanced users who want to get intimate with complex processing tasks. At the other end of the spectrum, it’s easy to dial in some great-sounding effects – think Aphex Twin – using just the basic interface. It may not be the prettiest plug-in on the block, but in terms of audio processing it’s highly capable and will suit anyone looking to add extreme granular slicing effects to their tracks.

+ Detailed control of all parameters

A great sound-mangling plug-in that can completely reshape your sounds. Attractively priced for beginners and professionals alike