Captain Plugins is a new suite of tools to help composers extend their chord, melody and bassline palette. Alex Holmes takes a suite at the Captain’s table

We’ve seen quite a few compositional aids crop up in recent years, and Mixed in Key is the latest company to add its product to the fray. Best known for its harmonic DJ mixing software of the same name, Mixed In Key’s latest plug-in suite offers up a way to quickly generate chord progressions, melodies and basslines to kick start the creative process. Captain Chords, Captain Melody, Captain Deep and Captain Play actually started life as features inside a musical sketch pad software called Odesi, but have been developed and broken down to modular VSTs that can be used on MIDI tracks in your DAW of choice.

Although the plug-ins share similar looking GUIs, the main honcho here is Captain Chords, which works as the master, feeding harmonic changes to the Melody and Deep plug-ins. In fact, the Melody and Deep plug-ins won’t fully function unless they are linked to another instance of Chords. To build a pattern, you can select a starting key, then choose from a long list of chord progressions, which can then be tweaked and edited as you see fit, with up to four patterns in a single plug-in instance. Alternatively, you can add chords individually and select different inversions, octaves and extended harmonies, and increase or decrease the overall complexity by adding or taking away notes. The default option for the inversions is ‘Minimize Leap’, which is a nice way to quickly get smoother sounding chord changes.

Elsewhere you have a vast list of different rhythmic patterns that can breathe life into your progression, plus a list of timings (new to version 2) that alter the placement of the chord changes across the bars. This is a great new feature that allows you to create passing chords and quickly switch up the feel of your progression in an instant. It’s a shame you can’t edit the MIDI timing or note positions directly in the plug-in (although we’re assured this feature will be coming in a future update), but for now you can simply drag the finished pattern to your DAW for editing.

Other new features in version 2 include a Strum dial to add some movement, and a much needed Swing amount. There’s also a clever Space dial with a bunch of different settings to help refine the note length relationships. For example you can change all lengths as a percentage of the original, or using Smart Legato that can keep long or short notes and only affect the others.

Once you have a progression that you’re happy with, you can use the built-in sounds, or route the MIDI out to your instrument of choice, be it a software sampler or hardware synth. If you do decide to stick with the built-in patches, there’s quick and simple sound editing with 100+ presets, 5 types of reverb, a delay with several timing settings, and a bi-polar filter with LP and HP. The sounds themselves won’t set the world alight, but there’s a decent amount of variety, from synth pads, plucks and leads, to pianos, guitars, organs and strings, to help inspire an initial idea.

When you want to add in some extra layers, you can turn to Captain Deep and Captain Melody, which take their lead from Captain Chords and will transpose if you make any master changes. They are fairly similar, although Deep produces simpler and flatter patterns for use as basslines, and Melody has a few extra options to let you control the melodic shape and chord Tension. As such, you might want to consider using Captain Melody in the lower octaves if you want a pattern with a bit more of a playful shape to it.

In practice, we found Captain Chords to be a powerful tool for coming up with inspiring ideas and new chord progressions, with plenty of options to tweak the grooves and patterns. Captain Deep and Melody were a little more hit and miss however, and we occasionally found the possibilities from the shape and rhythm settings a little restrictive, as you have to cycle through to find a pattern that you like the sound of, rather than being able to edit it.

The final seaman sailing the ship, is Captain Play, which offers the ability to preview and record chords and melodies in a chosen key using a QWERTY or MIDI keyboard. This is a fun and easy way to come up with new progressions and to experiment with melodies without fear of hitting the wrong notes. It plays tight, 3-note chords that always sound good together, although it would also be nice to be able to play larger and more complex chords, or to perform using the progressions that you’ve written using the Captain Chords plug-in. You also have a Strum dial, the ability to set up different MIDI keyboard zones for playing different chord types, and a simple recorder that lets you play an idea, then drag and drop straight to the timeline. There’s also a version of Captain Play built in to the Play tab on the other Captain plug-ins.

One thing that may be an issue to some, is the fact that the software needs to be connected to the internet to function fully, and if you’re not online you can’t generate any new content, although you can still use the sounds from the plug-in. For us, this isn’t really an issue, as we do 99% of our writing on a laptop and studio Mac that are always connected to the Internet, but it may be a deal breaker if your connection is patchy or if you often write in situations where there’s no wi-fi.

If we’re getting picky on the suite overall, it would be useful to have some velocity control and humanisation, as the level of notes can make a big difference to the feel of a chord. Also, it would be nice if the editing on Melody and Deep were a little more fluid, maybe with dials for complexity and note spread, rather than just flicking through preset patterns. These things aside though, it’s a well thought-out system overall, with a clear GUI that’s very smooth and quick to use.

It’s worth noting that the plug-ins are currently only supported for use with Logic, Live and FL Studio, so you might want to use the 30-day money back guarantee to double check that it works with your DAW. Also, at the time of writing, the Captain Melody plug-in isn’t yet available for Windows. Mixed in Key is working on this however, along with several other new plug-ins in the Captain series that will become available as free upgrades for both Mac and PC users.

The next two listed are called Captain Hook (to help you write toplines) and Captain Beat (to help with beats), and we’ll be interested to see what other bespoke writing tools are added as this modular setup develops. At the current price, and with the included upcoming extras, it’s a bit of a steal, but be aware that there’s talk of a price increase down the line, probably once the suite has expanded a little more. It’s a very strong start for the software, and although there are a few small features we’d like to see, it’s constantly being refined and improved.

If you struggle to come up with compelling chords, basslines and melodies, then this is definitely a tool that could help inspire some new ideas. It won’t write good music for you, but could be a useful stepping stone to creating the kinds of progressions that you might not normally come up with. We’re slightly less convinced about the melodies and basslines part, as the natural groove, feel and emotion of a good pattern should really come from the heart, but there’s certainly no harm in being given some pointers to experiment with if you’ve been experiencing writer’s block. The good thing about the modular nature of Captain Plugins is that you only need to use the tools that you need to get the job done, without the others getting in the way. 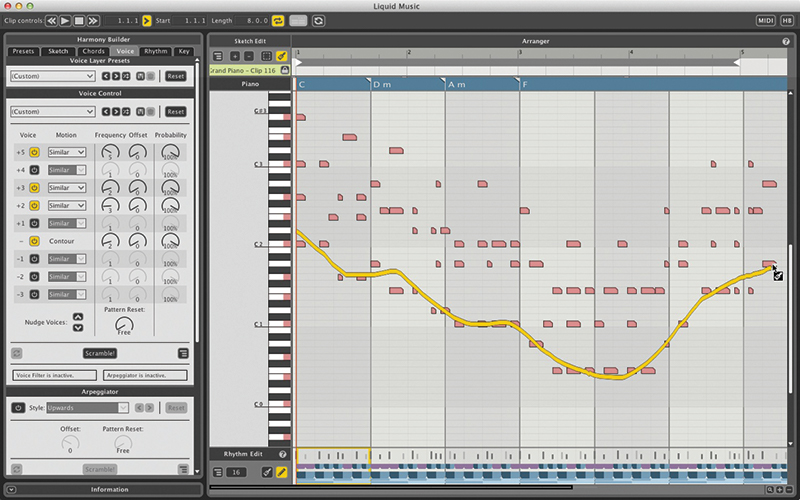 Liquid Music has a deeper toolset for creating and editing patterns, including a unique tool that lets you paint the shape of your chord progression, and can also use probability to add variety. It’s more expensive and a little harder to learn though. 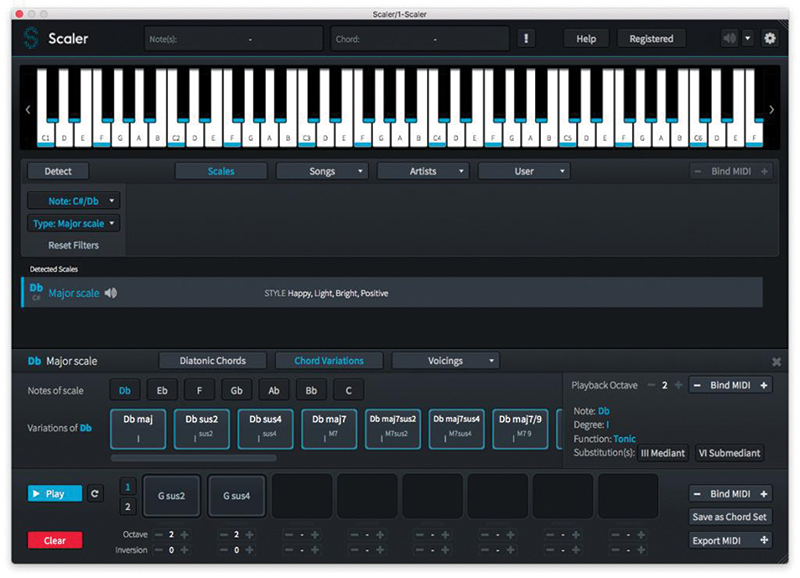 Scaler is a cheaper option that has some superb artist preset progressions and an intelligent suggestion system that can highlight useful chords. You can perform complex chords using one note but it only does basic rhythms.