Want to mix a virtual orchestra on a virtual stage and position the players wherever you wish? Keith Gemmell enjoys a free hand. 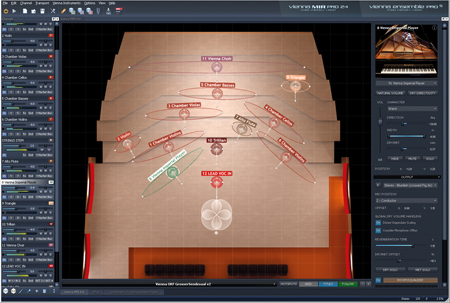 Although we may go to concerts, few of us ever gets to record an orchestra in its natural environment, on a big stage in an acoustically suitable hall. Some of us, though, work with virtual orchestras, which usually involves mixer channels, pan pots, faders, EQ, auxiliary sends and reverb. As a consequence, time-consuming work is needed to achieve an effect that occurs naturally in the real world, where we hear the instruments positioned spatially within the room. Is it possible to work with our virtual orchestras in the same holistic fashion?

Well, VSL has released Vienna MIR PRO 24, a budget version of its Multi Impulse Response mixing and reverberation software. It includes all the features of the full version but with a limit of 24 instruments, ensembles or audio signals that can brought together and placed on its virtual stages.

Although much is happening beneath, on the surface MIR PRO 24 is self-explanatory and easy to work with. However, a copy of and license for Vienna Ensemble PRO 5 (VSL’s mixing and hosting software) is required. If you don’t already own it, a bundle of both products is available.

It works like this. On opening VE PRO 5, you select MIR PRO 24 and choose a venue from the included Vienna Konzerthaus RoomPack. Four halls are available: a large concert hall, two halls suitable for chamber music and contemporary music respectively, and a small hall for solo piano or small chamber ensembles. A highly reverberant marble foyer is also included. This is a great choice for classical work, but if you write for film or games you’ll more likely need one or both of the extra RoomPacks: Studios & Sound Stages (€245) and Mystic Spaces (€175).

The next job is to select a microphone position. The concert hall, for example, has a choice of conductor, 7th row, 15th row and gallery positions. Only one can be selected at a time. After deciding on a microphone output – a crossed stereo figure-8 is the default format, although a large range of other typical setups, all of which can be edited, are available – you can add either a Vienna Instrument, a third-party virtual instrument or an audio channel (for a vocalist, perhaps).

Each type has its own icon, which can be dragged to a suitable stage position. You can also change its direction, volume and stereo width. Up to 24 icons are allowed. In the case of larger productions, the stages soon become crowded, although you can hide icons if you need to.

As you grab an icon, certain parts of the venue, other than the stage, are highlighted with a warm glow. These are called HotSpots, which show the possible areas for placing an instrument. This enables you to place an instrument on the balconies, high above the stage or even in the auditorium.

Special directionality instrument profiles are available for Vienna Instruments. General-purpose profiles are provided for other sources. Character presets, too, can be used to shape an instrument’s timbre, with at least five ‘colours’ to choose from.

In essence, that’s it, and the process is much more effective than using just a conventional virtual mixer for orchestral music. Of course, you can combine the holistic approach with conventional mixing by using VE PRO 5 for signal processing, automation and so on.

VSL’s software has always been top-class, and MIR PRO 24 is no exception. Being able to arrange VSL’s virtual orchestral instruments in a concert hall is a liberating mixing experience to say the least. Adding third-party virtual instruments and even audio signals is truly amazing. You can, of course, use conventional mixing techniques alongside MIR PRO, but once you get the hang of it, using the software as you would a real-world analogue mixing console at a live venue soon becomes addictive.

+ Fast and intuitive to use

Mixing VSL’s Vienna Instruments alongside third-party VIs and audio signals in a single reverberant space (concert hall, studio and so on) is a truly liberating experience.