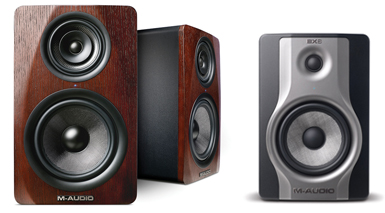 M-Audio has released two new active monitors with Kevlar cones and soft dome tweeters – but that’s where the similarities end. Huw Price tests the BX6 Carbon and the M3-8… 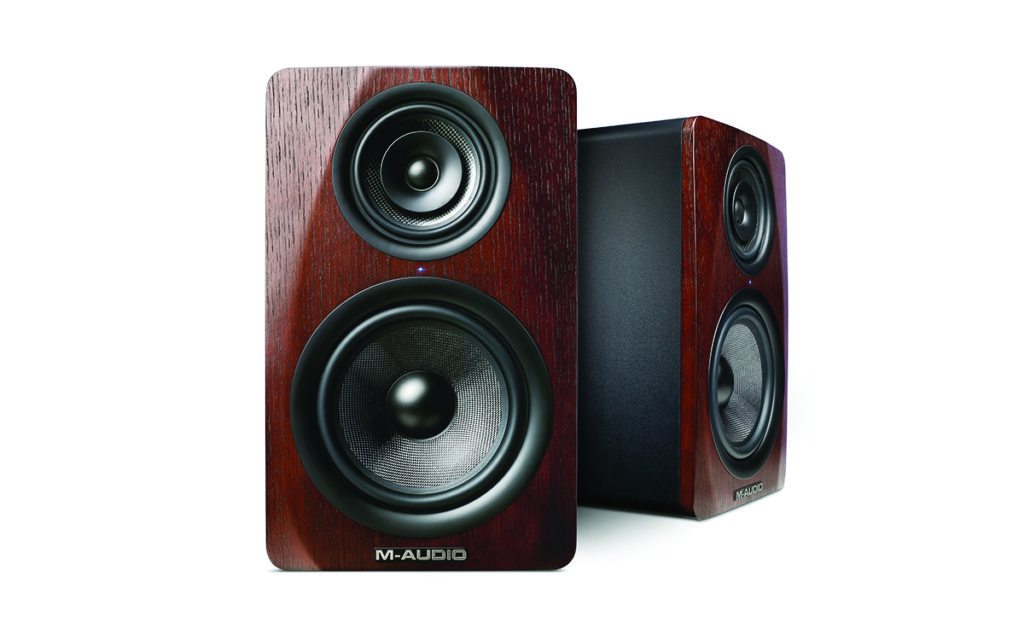 The BX6 Carbon is the smaller of the two M-Audio monitors we’re reviewing this month. It’s equipped with a 6in woven Kevlar low-frequency driver and a 1.25in silk dome tweeter with 100W of Class A/B bi-amplification.

Kevlar is the stuff they use for bulletproof vests, so if somebody starts waving a pistol around in your control room, at least you won’t have to worry about holes in your speakers. More importantly for us, Kevlar is also reputed to provide a fast transient attack, high sensitivity and resistance to cone flexing. 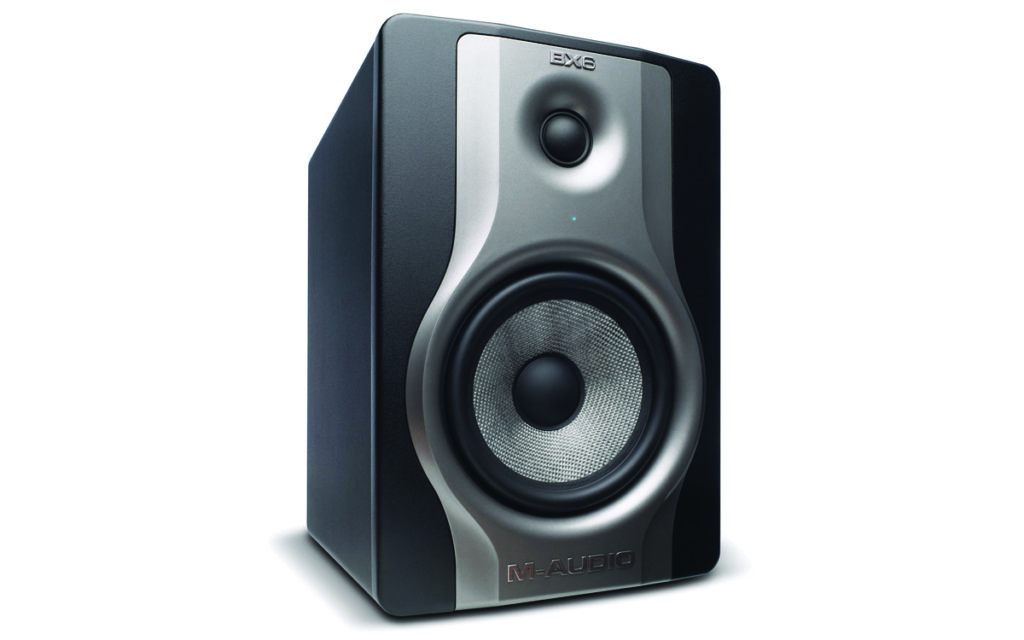 The tweeter has a waveguide to expand the listening ‘sweet spot’ and enhance stereo imaging. An Acoustic Space switch adjusts the bass response with three settings – flat, -2dB and -4dB. Audio connections are made via TRS jack or XLR as well as a volume control

Appropriately enough M-Audio believe you ‘need’ a three-way monitor for three reasons. Firstly, they’re louder because a typical midrange driver with a 4in to 5in diameter moves more air in its frequency range than a 1in tweeter. So you get more sound pressure for the same input power.
Secondly, the midrange driver can handle more amplification power than most tweeters, and the tweeter can be used to handle the high frequencies that it’s really designed for. Similarly the crossover can be configured so the woofer only handles the bass end.

Thirdly, the dispersion or radiation pattern is said to be extremely wide and consistent. In a studio context this should mean that you can hear a proper balance without being tied to the sweet spot dead centre of the speakers.

Having said that, one of the drawbacks that may be an issue for multi-driver speaker systems is that the sound emanates from a wide area rather than a single point source and this means that not all frequencies reach your ears at the same time.

To overcome the potential for time/arrival distortion, M Audio has mounted the M3-8’s midrange and tweeter in-line with each other. It’s hardly a new idea and respected speaker manufacturers have favoured this coaxial method over several decades. However, it is unusual to get coaxial monitors at this price point.

Both the 8in woofer and the 5in midrange driver have Kevlar cones and ferro fluid cools the 1in tweeter. Three drivers call for three separate amplifiers, producing a combined total of 220 watts of Class AB power. A powerful three-band (LF, MF, HF) equaliser combines with a switchable low-cut filter, which enables the M3-8 to be used with a subwoofer – such as the M-Audio’s BX.

Computer technology has been used to determine the optimal size and location of the rear bass port, and internal bracing has been designed to solidify the enclosure. Perhaps the most visually striking feature is the wood veneered baffle, which creates a softer and classier look than the pseudo hi-tech stylings of the BX6.

Coaxial monitor theory can be explained in simple terms. When recording vocals or an electric guitar it’s obvious that the sound comes from a specific place, so that’s where you place your microphone. Speakers divide sound into frequency bands and divert it to two or more drivers. These drivers are physically separated so reproduced sound emanates from a relatively wide area rather than a single point. Therefore frequencies will reach your ears at different times. 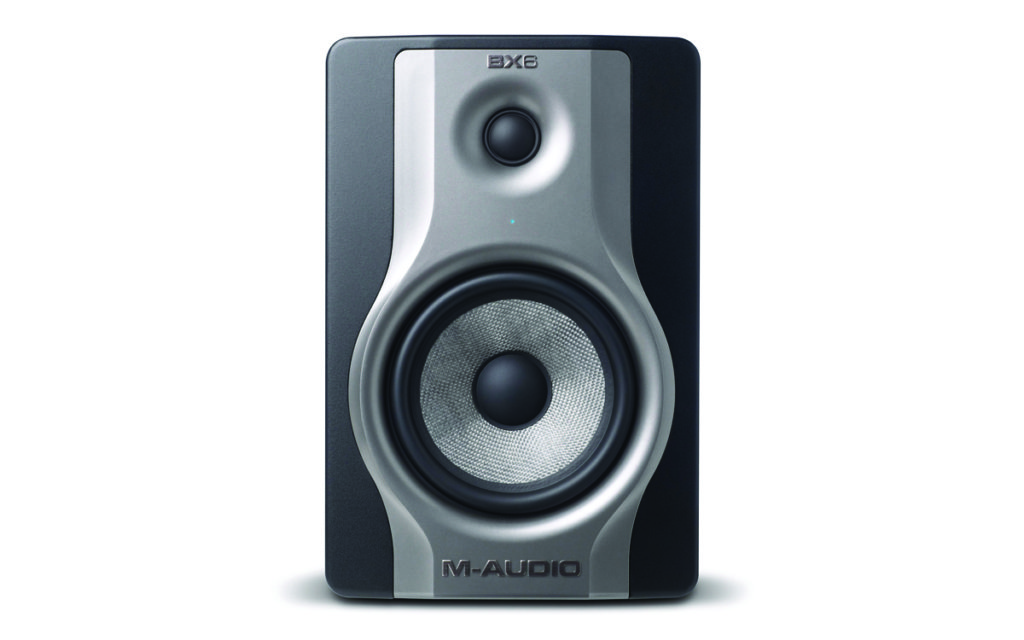 The first thing that captured our attention was the BX6 Carbon’s clarity. The treble response has definitely been ‘assisted’ to some extent, presumably in an attempt to achieve this wide open sound stage. By and large this has been successful. Consequently you can really hear inside mixes, particularly acoustic recordings, and sense the room ambience around the instruments. Detail resolution is another plus.

The BX6 Carbon has a fast transient response, which combined with the airy top end puts me in mind of folded ribbon tweeters rather than conventional domes moving coil units.

The bass is weighty, deep and fairly well focused, however there may be a hint of boominess if the enclosures are placed near a wall or in a corner. That said, we found the Acoustic Space switch very effective with a mere -2dB cut proving sufficient. 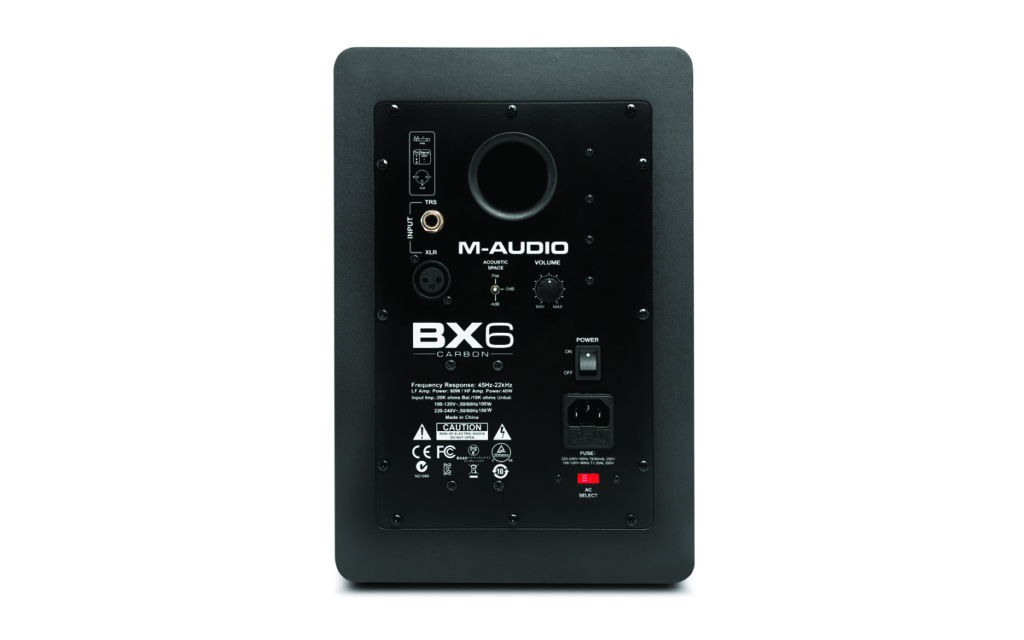 Imaging is fairly crisp and it’s easy to hear finer details from midrange instruments and vocals. However the big bass and treble lift do conspire to make the midrange seem a bit recessed. So your ears would need to adjust to the treble response before the BX6 Carbon could be totally relied upon when making critical mixing decisions. 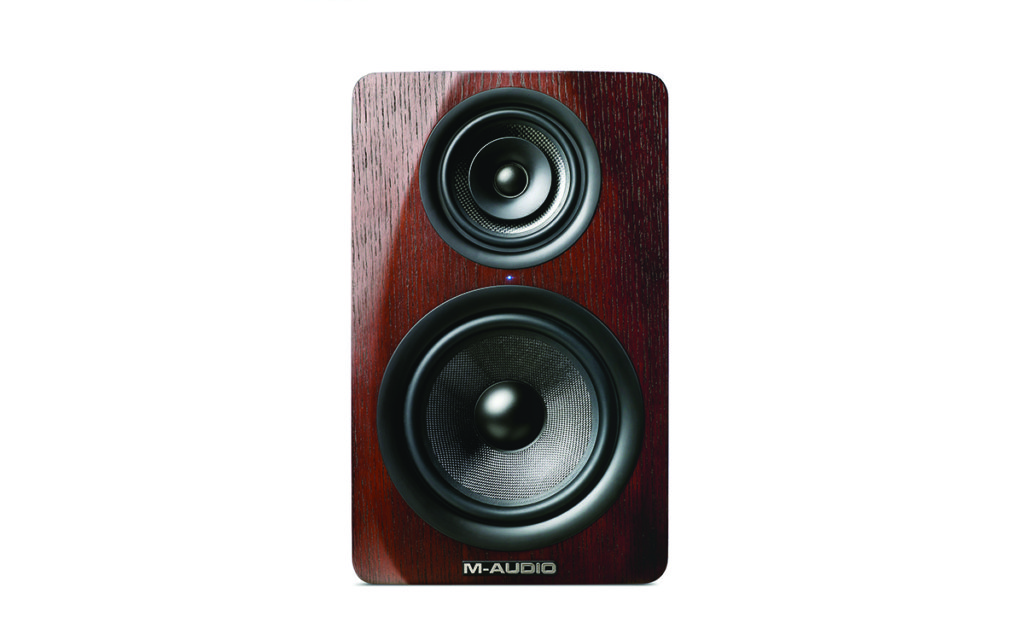 The M3-8 is perhaps not the best choice of monitor for project studios and small control rooms. The enclosures are pretty sizeable and both the volume levels and scale of sound that they produce is best appreciated when this monitor has a bit more room to breathe. You should also consider placement, because any speaker stands will need to drop down fairly low if the M3-8’s midrange/tweeter combo is to fire at ear level.

While having just as much clarity as its smaller sibling, the B6 Carbon, the M3-8 has a far more conventional treble response. This is no bad thing because even with the equalisation controls bypassed the M3-8 requires far less in the way of acclimatisation.

Imaging is crisper too, with key mix elements located fairly solidly within the left/right image and plenty of soundstage depth. None of us work in anechoic chambers so some degree of frequency adjustment is generally welcome. There are two things that we really appreciate about the M3-8’s setup. Firstly the controls are indented, which makes it simpler to match the settings on two or more speakers. Secondly the whole equalisation section can be bypassed. 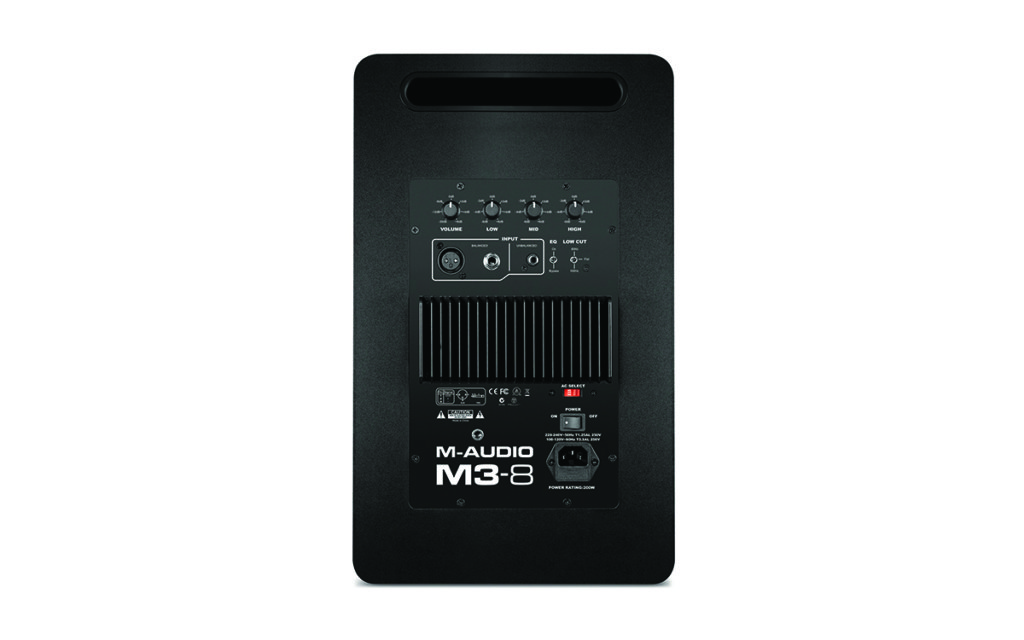 Although we would have been quite content working with the M3-8 set flat, we did investigate the EQ controls. The settings that worked in our room were a slight treble lift combined with mid and bass attenuation of one and two notches respectively.

The BX6 Carbon is a very impressive performer at this price point, however we feel it would be even more impressive if the frequency controls allowed for some treble adjustment as well as that low end tweaking. But even with these misgivings, it’s certainly well suited to project studios, and would not sound or look out of place in a professional environment. 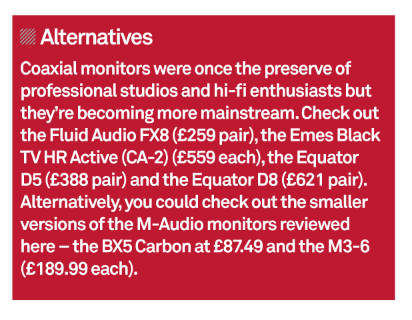 The M3-8 costs twice as much but you do get an awful lot more – in every sense. There are relatively few manufacturers offering coaxial monitors at this price, and when you factor in the M3-8’s high quality audio, frequency response adjustment and sheer power it looks like a very interesting proposition. 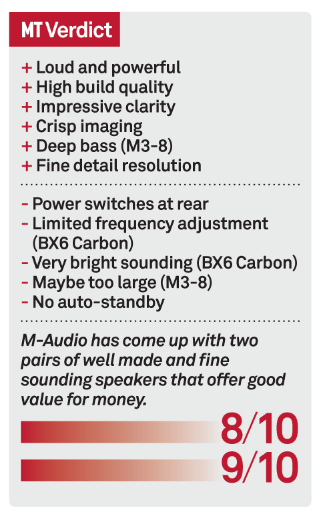