Olympus is a company that pops up on the MusicTech radar when it comes to hand-held recorders, and it has a good track record in terms of the models we’ve covered in the past. As part of the new generation of Olympus recorders, the LS-12 features various different recording modes that cater for a variety […] 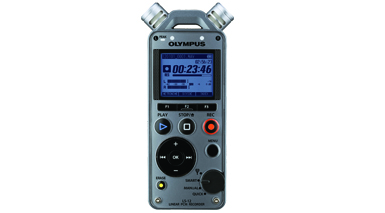 Olympus is a company that pops up on the MusicTech radar when it comes to hand-held recorders, and it has a good track record in terms of the models we’ve covered in the past. As part of the new generation of Olympus recorders, the LS-12 features various different recording modes that cater for a variety of recording situations. This was also the case with the LS-14, which we have covered before, but the LS-12 comes at a much more entry-level price.

The onboard storage capacity is smaller – 2GB compared to the LS-14’s 4GB – but you can add up to 32GB via a standard SD Card. You can also do sound-on-sound recording to sketch out song ideas. This isn’t multitracking in the respect that you can go back and re-balance the layers later on, but it’s still a handy feature for layering guitar takes and perhaps harmonising your vocal parts to paint a better picture of a song as you compose. A metronome and tuner are also included, which again will help you produce better-sounding demos. A light on the unit can be used as a visual guide to tempo if you don’t have headphones.

Three recording modes are available, with manual being the normal situation of the user defining the best recording level using plus/minus increment controls on the front of the unit. Switching to Smart lets the unit assess the current level over a period of time to determine the best input gain. This can be useful in consistent-level scenarios such as a conversation, performing band or general ambience recordings. It also provides set-and-forget benefits, so if you’re in a rush or dealing with other tasks – like setting up other gear – this will save you some time with overall setup. Finally, Quick mode uses an auto-level setup, so it will adjust as you go – useful for avoiding too many loud surprises. However, it does fluctuate, so it’s perhaps not the best choice for high-fidelity recordings.

During our recording tests we found that the LS-12 stayed true to the typical Olympus sound we’ve experienced from other models. There’s a good amount of detail captured, but it has a more rounded top end. This means that instead of a super-pin-sharp top end you get a slightly more pleasing ‘produced sound’ making it a great recording tool for production work.

Another aspect of this recorder that shines when set against other models is the amount of background ambience detail and stereo information. The only thing we did notice was a little more noise in the background, but at this price the LS-12 certainly yielded the most pleasing results before treatment to the recordings in post.

A leader in terms of tonal capture in its price bracket and incredibly simple to use in a variety of recording situations.