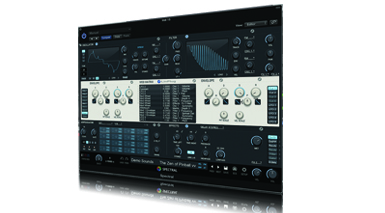 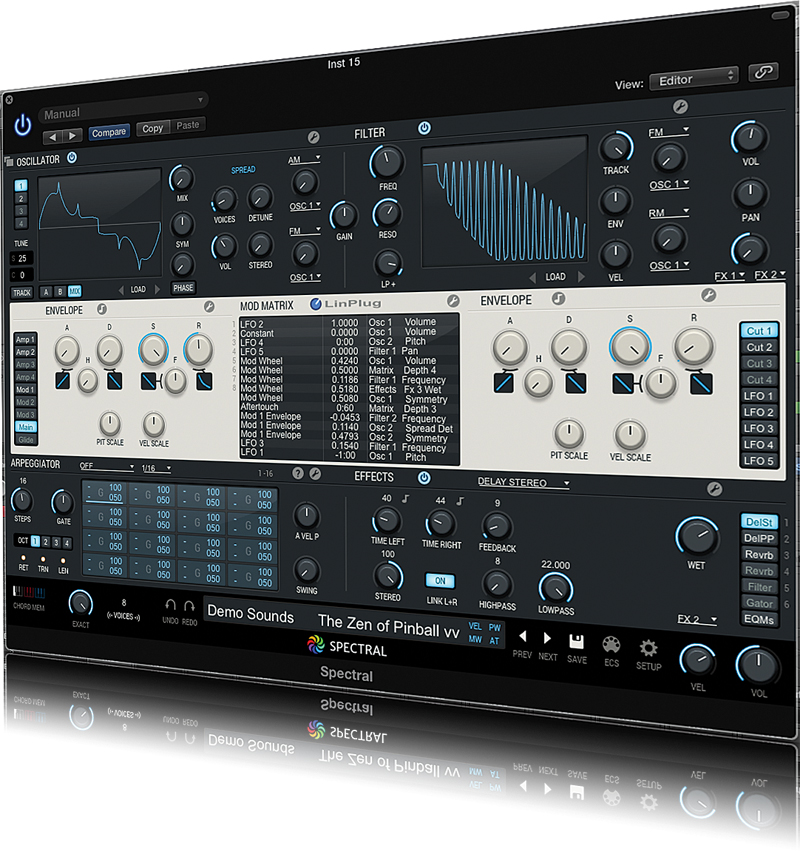 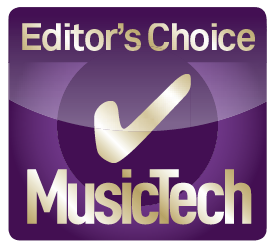 Subtractive synths (in both hardware and software formats) are pretty common these days, so it is initially somewhat surprising that LinPlug’s latest synth, Spectral, is largely based around the old oscillator/filter/amplifier model that synths have been using since their knobs were first turned. Mind you, it’s a policy that hasn’t done hardware synths any harm, and 2013 saw yet more traditional analogue synths sweeping back into studios: Novation’s Bass Station II, Arturia’s MicroBrute and Moog’s Sub Phatty to name just three – all new synths in incredibly traditional forms.

The beauty of software, though, is that you don’t have to stop there. In the case of hardware, adding more bits could be cumbersome and costly. With software, though, just bolt it on virtually and grow – there are no physical limits. And apparently, LinPlug has built a lot of extras into Spectral, including the ability to edit the waveforms and filter shapes that make up the core elements of the synth. Spectral could therefore have a lot more sonic clout than you might initially think…

Extra Bells
Let’s start at the beginning. Firstly there are four oscillator and filter blocks, so we’re already looking at something with a huge potential depth of sound. You can easily click between these four using the 1–4 buttons to the left of the fascia. Each of these has its own envelope to control volume and frequency, so you can very much get into the source sound and change from the ground up. They also have the fairly standard Mix and Detune controls, so you can set levels or slightly detune individual voices for a fatter sound.

However, it’s in the oscillator waveform editing and filter-shape editing mentioned above where things start to get even more interesting. At a simple level, with the waveforms this is done by dialling the Phase and Sym rotaries, which shift the waveform either out-of-phase or symmetry (rather like you are controlling an old oscillator in a physics lesson). But you can go one step further and get into editing the harmonics of the waveform itself simply by clicking on it. This opens up a more detailed editor where you can pull it – or sections of it – up and down and edit groups of harmonics to almost instantly create new waveforms. There are numerous editing options, including Pattern editing – where certain harmonics are left intact – and Blend, where you can bring in other waveshapes and mix the two together (see the walkthrough for more on this).

You get pretty much the same options available for the filter envelope shape. Again, simply click on it and draw in your own shape, or bring in other filter types to mix – you try doing that in hardware! The flexibility that this brings, right at the core of the waveshapes and filters for each oscillator, cannot be understated – it’s a massive addition which, as we will see and hear, brings wide results in the synth’s actual sonic output. Finally in this large ‘ingredients’ section, we must also note that there are five LFOs – each with lots of waveform and sync options – as well as three assignable modulation envelopes.

That already sounds like a lot of options, but at the centre of the synth – physically onscreen, anyway – is the modulation matrix. This enables you to connect up to 35 sources – including all of the aforementioned mod envelopes, LFOs, the amp envelopes and usual pitch/mod wheels and aftertouch – to well in excess of 100 destinations, including all of the parameters for the filters, oscillators and onboard effects.

More! More!
So there’s a lot of waveform editing, lots of routing, and all to the power of four, so the pot marked ‘flexibility’ is pretty much full to the brim. But prepare for it to overflow because there are two other areas that add even more. The effects we have already touched on – there are six slots plus a Master EQ, with 15 types of effect on offer including a couple of reverbs and delays plus bitcrushers and filters. These are incredibly easy to bring in and out of a sound – just switch on and dial in the wet and dry mix, for example, or the room size with reverb. These can dramatically alter a sound in seconds, once again adding to the sonic clout that Spectral can deliver.

The final feature to cover is the arpeggiator. This is like a 32-step sequencer in which you can choose from ten patterns as with a typical arpeggiator, or program your own individual parts per step (so, for example, programming notes in by semitone that will be played up or down from the played note). You can also ‘force’ it to play a particular note and have control over velocity, glide and gate settings. Once again, it’s very well implemented and easy to use.

Spectral Sound
The arpeggiator really does help the onboard presets stand out. Many are loop-based riffs, which, with the nudge of a parameter (most dramatically the pitch) within the arp section, you can easily make your own. Some of these loops are incredibly vibey and inspirational and some even come with built-in beats. The Edgy Beatbox preset sums up Spectral nicely for me, with the arpeggiator stepping through a sequence of 16 steps to make a loop, with oscillator 2 providing a sine-wave kick, 4 providing a snare, and 1 and 3 providing musical movement. Other ‘sequenced’ banks include the Club Sequences: a bunch of hard-hitting contemporary dance loops that are very effective if you drop them into whatever you are doing for a bit of instant cool.

Don’t worry if you don’t like things too loopy, though, as Spectral also excels in many other categories, having some great basses and drones plus lots of leads and keys, although many of these have a very definite dance feel – this is certainly a synth aimed at that genre more than any other. Having said that, my favourites are the big lush pads and strings and some very cool atmospheres – the synth really does excel in these areas too, so it could be applied to a wide arena of music-making.

So who said this was an ordinary subtractive synth? Not me! Never judge a synth by its interface, because with Spectral, I got a lot more than I bargained for. LinPlug hasn’t reinvented the wheel, but it has taken it, quadrupled its power, stuck it on a bloody great big four-by-four and built what Jeremy Clarkson might call the Range Rover of synths. It’s a stunner! 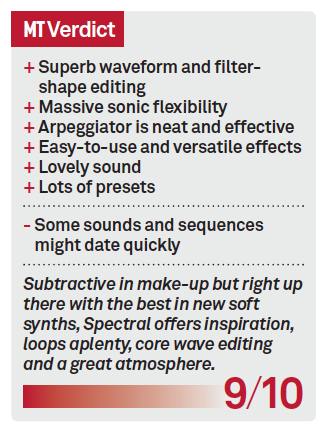 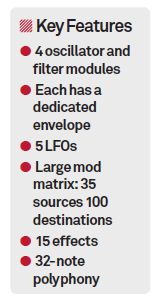