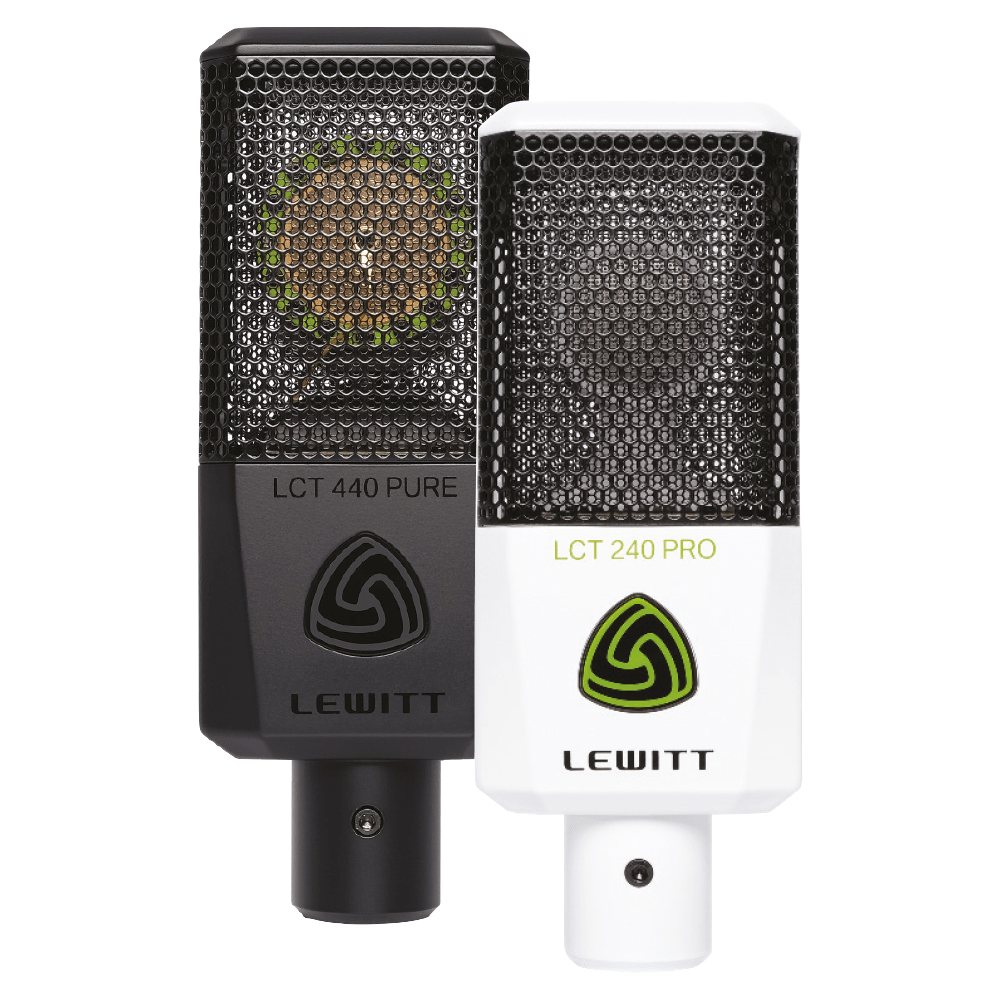 On the surface, these two microphones are very similar. In fact, were it not for our LCT 240 Pro coming in a very stylish white finish, it would be near impossible to tell the two apart. Both mics are built into the same body, with no additional switches or features – unlike some of the more advanced mics in the Lewitt stable. However, look a little closer and the differences between the two mics start to reveal themselves.

All other things being equal, capsule size can have a huge impact on the sonic characteristics of a microphone. A smaller capsule has less mass than a larger capsule, and so can respond to transients faster than a larger capsule. There are also benefits to high-frequency response and to directionality when using small-diaphragm cardioid capsules.

However, a larger capsule will pick up more acoustic energy, as it covers a larger area and so will create a larger voltage, resulting in a stronger signal-to-noise ratio.

A large capsule, while not as technically accurate as a small-diaphragm capsule, is often thought to be more pleasing, and they remain among the most popular mics in many studios. At 0.67 inches, the LCT 240 Pro capsule fits somewhere in between the large- and small-diaphragm categories, while the LCT 440 Pure is firmly in the large-diaphragm class.

We started our testing by putting both mics up on our dreadnought-size acoustic guitar. The guitar has a naturally open, woody character, with plenty of bright top-end which helps it cut through dense mixes.

We placed both the 240 and 440 about a foot from the guitar pointed directly at the 12th fret, with the two capsules as closely aligned as we could manage, resulting in the LCT 440 Pure capsule around two inches above the LCT 240 Pro. Both mics were then run direct into a pair of CAPI VP28 preamps, with switched gain.

Sonically, it sounded a little more mix-ready, balancing out the woody tones of the body with the bright strings and subtly rolling off the low end in a pleasant manner. By contrast, the LCT 440 Pure had a more honest tonality, with a stronger bottom end, flatter, less-hyped midrange and smooth, open top.

Both of these two microphones clearly have their place: the LCT 240 Pro is more suited to guitars used alongside other instrumentation, particularly bass and drums, where the more mid-forward presence would help the acoustic guitar to sit in the mix without getting in the way of the other instruments.

Conversely, the more honest sound of the LCT 440 Pure is more suited to simpler mixes, perhaps just a guitar and voice, where the extra bottom end won’t be getting in the way of other instrumentation. However, the broader, flatter response of this microphone also makes it easier to EQ into shape, should the natural tone of the mic not suit the mix.

Testing the two mics on our baritone vocal, things got a little more complicated. The LCT 240 Pro had the same, slightly rolled-off bottom end, which helped to push the midrange forward, but this time, the upper-mids sounded a little crowded and boxy, leaving the bottom of the vocal range sounding a little weak, while the top sounded slightly constrained. The LCT 440 Pure, by contrast, sounded full-bodied and rich, with a more open airiness at the top-end, which flattered without sounding overly ‘enhanced’.

With a little EQ dip around 4-5kHz and another around 8-10kHz, the LCT 240 Pro sounded smoother through the upper mids, but still had neither the rich, full-bodied bottom end of the LCT 440 Pure, nor the airy top-end. We ended up adding a little extra 12kHz to open the microphone up.

On the right vocalist, though, the LCT 240 Pro voicing might be perfect, but on our baritone it took work to bring it up into the same ball park as the LCT 440 Pure, which we feel wouldn’t need much work whatever the vocal, as it sounded so smooth all across the frequency spectrum.

If you’re looking for one mic to make the centrepiece of a modest collection, or even to be the only mic you own, the LCT 440 Pure is a great option, providing an open, balanced signal which could easily be used to record all manner of instruments and voices without any trouble.

The LCT 240 Pro on the other hand has a little more nice, mid-focused character to it. This means it’s great for guitars and some voices, but not quite as versatile as the LCT 440 Pure.

For our final test, we used both mics to record a variety of percussion we had to hand; tambourine, shaker, wood blocks and (a fairly small) djembe. None of the percussion we had to hand, with the possible exception of the djembe, had any low-end to speak of, so the rolled-off low-end of the LCT 240 Pro in theory should have kept out any potential noise, while the fast attack of many of the percussive sounds should have been better captured by the smaller diaphragm of the LCT 240 Pro capsule, when compared to the LCT 440 Pure. However, in practice, each microphone performed admirably.

The LCT 240 Pro in particular sounded fantastic on the shaker and tambourine, capturing not only the fast transients, but seeming to push the sounds forward at just the right place in the spectrum and needing very little EQ, in particular helping the shaker to sit alongside a programmed hi-hat part. 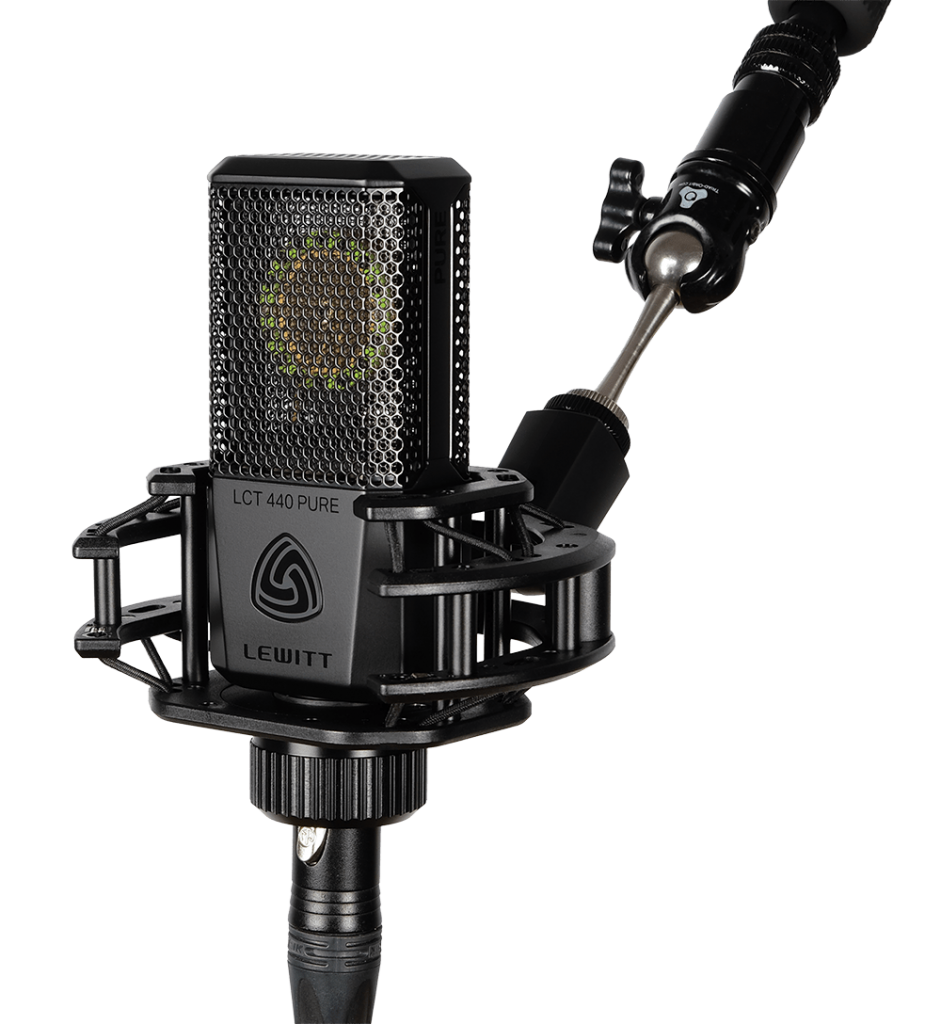 While the bottom end of our djembe wasn’t big enough to make much of an impact on the difference between these two mics in this range, both were able to capture the fundamental of this instrument without any problem. In solo, it was very difficult to hear any difference between the two mics on woodblock, but in the mix, the LCT 240 Pro perhaps had the edge, as the instrument stuck out just that little more from the dense mix.

Both of these microphones are useful, versatile additions to any mic collection. Despite being the cheaper of the two, the LCT 240 Pro could easily find a role in many professional-mic collections, as the voicing will definitely suit some instruments more than others; while the LCT 440 Pure is a more neutral-sounding microphone that would make an excellent choice for anyone looking to just add one detailed, high-quality condenser to their collection – there’s nothing it won’t sound at least pretty good on, and it will make many things sound great.

The Aston Origin has quickly become one of our favourite vocal mics, winning out against mics many times its price and garnering plaudits around the industry. Though it isn’t as neutral sounding as the LCT 440 Pure, its character has been a favourite of ours on countless different voices.

The SE X1 may not have quite the nuance of either of these Lewitt mics, but you can get hold of one at half the price of even the LCT 240 Pro and it comes with both a high-pass filter and pad built-in, making it a very versatile option, and a great way to fill out your mic cabinet on a budget.