A lesser known company has brought out a preamp with true integrity. John PIckford gets to grips with kit that lives up to its name… Details Price  £1,499 Contact KMR Audio 020 8445 2446 Web www.levsolutions.com Amazon.co.uk Widgets Stand-alone microphone preamplifiers are a relatively new addition to the world of studio outboard gear. Whereas compressors, […] 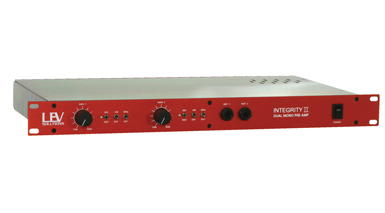 A lesser known company has brought out a preamp with true integrity. John PIckford gets to grips with kit that lives up to its name…

Stand-alone microphone preamplifiers are a relatively new addition to the world of studio outboard gear. Whereas compressors, equalizers and other processors have been a mainstay within outboard racks for decades, the microphone preamp was traditionally found inboard, as an integral part of a studio’s multi-channel recording/mixing console.

It was only when old desks from the 1960s and 70s were replaced with more modern consoles during the SSL-obsessed 1980s that engineers began dismantling out of service desks in order to have a variety of sonically different recording channels.

Nowadays, with many music producers – professional and amateur alike – working with DAWs, the appeal of individual microphone preamplifiers has never been greater. Many mic-pres available today are clones of, based upon or inspired by classic consoles such as Neve, Helios and the EMI -designed desks used in Abbey Road studios. It’s refreshing then to audition a high-quality preamplifier that has been designed from the ground up, making no claims to emulate equipment from the past, focusing purely on the best modern analogue recording technology available today. 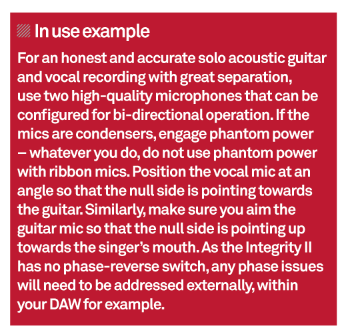 Israel based LEV Solutions is a company established by a team of experienced audio engineers and music industry professionals headed up by Yoram Lev. Its aim is to create high-quality, reliable units that can be used both in recording studios and on location.

The Integrity II is LEV’s first product to market, the II suffix in the unit’s name referring to the dual-mono configuration of the preamp rather than a revision of an earlier design. The company states the Integrity II was designed to provide “super clean” performance for tasks such as recording dynamic classical orchestras, while remaining “musically warm” when recording vocals and instruments associated with popular music.

Yoram Lev told us that he set out to produce high-end audio gear that he would personally like to use, designing the Integrity II with “a good friend, a somewhat eccentric genius engineer who has a reputation as the best recording engineer for classical music in Israel.” Many high-quality microphone preamplifiers are transformer based – however, LEV believes that this approach adds colouration to the audio source so the Integrity is a transformerless design.

The Integrity II is clearly a no-nonsense design; there are no tone controls or fancy devices to add saturation effects or vintage character. In fact the unit thrives on being devoid of obvious character, preferring to be faithful to the character of the microphones used with it. Front panel controls consist of a gain pot for each channel, along with an instrument (DI) input, and switches to select either microphone or instrument sources, a high-pass-filter set at 40Hz and +48V phantom power, again for each channel.

The pots are premium items from UK manufacturer OMEG and the switches are made by Salecom Electronics of Taiwan. The wiring is by respected cable manufacturer MOGAMI. It’s clear that the unit has been hand-crafted to the very highest standards and, while it doesn’t have any sort of bling factor, the casing’s red finish is attractive. The casing has also been treated for passivation in order to eliminate electromagnetic interference (EMI) and radio-frequency interference (RFI).

Integrity in Use
Using the Integrity II couldn’t be simpler: just plug in and off you go. When using the front panel instrument input, the rear panel XLR inputs are cancelled once the MIC/INST switch is engaged for DI use. LEV recommends you turn the phantom power switch off before switching from mic to instrument input, and it’s worth reminding you at this point that phantom power should always be disengaged before connecting a ribbon microphone. An LED adjacent to the MIC/INST switch lights up green when a signal is detected and turns red when the input signal is too strong. When the red light glows it’s best to turn down the gain control to prevent unwanted distortion.

Initial impressions of the Integrity II were entirely positive. There was no detectable hiss or hum from the unit even when the gain was turned way up; the noise floor was vanishingly low. During our initial listening tests we used several different types of microphone, ranging from inexpensive dynamic types such as the Shure SM57 right up to our classic valve Neumann U67 condenser.

What was immediately obvious was how incredibly transparent this unit is. Now this type of presentation can either be a good or bad thing, depending on your point of view. Many respected mic preamps, both valve and solid-state, are loved precisely because of the character they impart onto audio signals.

If you want a mic preamplifier to flatter your signal, sounding larger than life, rich and creamy or adding sparkle then look elsewhere. The Integrity II tells it like it is, offering an open window to your microphone collection with nothing added and nothing taken away. It’s this style of hear-through amplification that is perfect for presenting audio in an honest and accurate way; Integrity is the ideal name for this unit.

Because this preamp gets out of the way and doesn’t try to impart its own sound on to your signals, you really get to hear the individual sound characteristics of microphones, so it was easy to hear the difference between our AGK C414 with its woody midrange and silky highs, and our U67 with its smooth, dark and expansive midrange with gently rolled-off upper frequencies.

When using our lovely but insensitive Coles 4038 ribbon mic, we were impressed not only with how much headroom we had – the Integrity II offers 65dB of gain – but also how the sound remained consistent at all gain settings. Lesser preamps sometimes change in character as the level is increased, but not this one; as the gain was increased the sound simply got louder with no change is tone or scale.

Speaking of gain settings, our review sample featured continuously variable gain controls, however LEV also offer the unit with stepped pots for those who need to accurately recall settings.

Using our beloved U67 to record acoustic guitar, we compared the Integrity II with our reference Thermionic Culture Early Bird valve microphone preamplifier as well as a Neve-inspired GAP Preq-73 and the preamps in our DDA analogue console. While the desk’s preamps aren’t bad, they sounded slightly thicker and more opaque in comparison with the review unit, while the Neve-like preamp sounded altogether bigger, warmer and more flattering.

This Neve style of presentation certainly sounds good, especially with pop music, but it isn’t the truth; it’s larger-than-life. Our favoured Early Bird valve unit sounded closest in nature to the Integrity II, which may surprise some of you as valves have a reputation for sounding characterful. 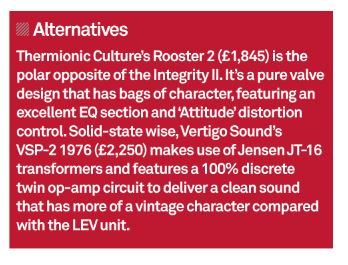 In fact, our valve unit sounds open and remarkably transparent, with only a slightly sweeter treble to set it apart from the solid-state review unit. Again, this sweetness in the upper registers is flattery, enriching the source material. The Integrity II is far more matter-of -fact in its presentation, remaining faithful to the signal it’s fed.

We also used the instrument inputs on the front panel to connect both a bass guitar and an ancient Vox Continental organ. As with the mic inputs, the unit gave an impressive full-range sound without any added flub or gloss. In an A/B test against our regular EMO DI boxes, the Integrity II sounded cleaner and more open.

Everyone who heard this excellent LEV product was impressed with it. As one engineer commented, it does exactly what you want a mic-pre to do. That is, unless you want a preamplifier that brings its own sonic fireworks to the party. If you want your mic-pre to sound sweet or phat, or make violins sound like cellos, or give the impression that your singer in 20 feet tall, the Integrity II won’t be for you.

Nor will this unit appeal if you expect bells and whistles on your microphone preamp – there are many other models that have tone controls, switchable impedances, saturation effects and ‘vintage’ buttons. If, however you desire a preamp that plays it straight, and is transparent to the signal it’s fed, this could be the unit you’ve been looking for. It may not have a Rock ‘n’ Roll heart, but it will treat your precious audio sources with great, erm, integrity. 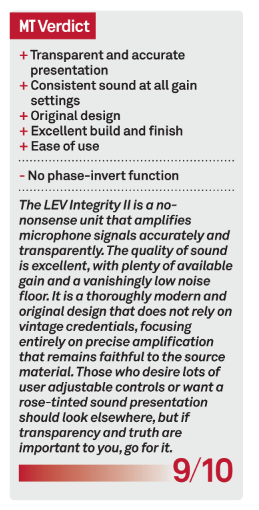 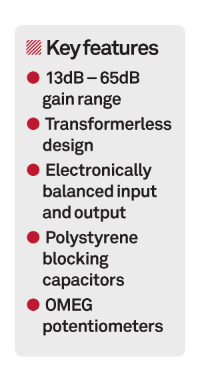