Does the world need another multiband compressor? Leapwing Audio thinks so. Alex Holmes opens up DynOne and dresses to compress… 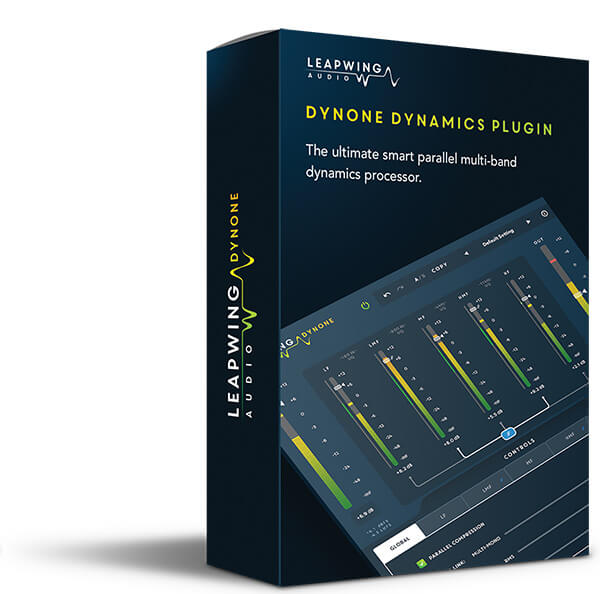 With that in mind, this new plug-in from Leapwing Audio aims to marry the two in a powerful, but transparent dynamics tool, which excels at bringing up low level detail rather than squashing dynamics.

DynOne is a 5-band, linear phase dynamics processor that can be used directly on the audio, or in Parallel Compression mode, with custom-built crossover filters that have been designed to avoid phase alignment issues.

The original version of DynOne was actually released last year, and this v2 release contains a handful of subtle, but useful tweaks. You have five faders in the middle of the GUI that control the volume of each band so you can subtly alter the tonality of your material by bringing up the parallel compressed versions. 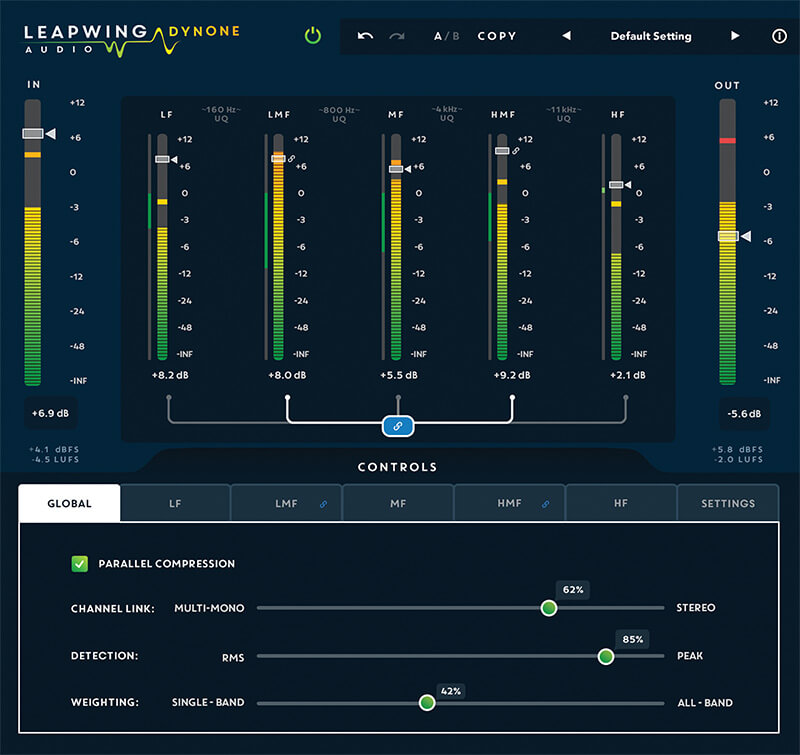 Straight off the bat, we were able to load a mixbus preset that added some excitement to the top end and controlled the lows, and adjusted each fader to taste, giving us a great sounding result in less than a minute!

You can also link these sliders, or solo each band by shift-clicking on the fader itself, with meters showing the band volume and compression amount, plus additional faders for the master Input and Output either side.

New features for version 2 here include Undo/Redo, an A/B function, and K-Weighted LUFS readouts on the Input and Output to help you understand how the processing is affecting the audio.

Standing in the way of control

If you wanted, you could just stick with these main controls and load one of the excellent and varied presets for mixing and mastering different material, then dial in the amount of parallel processing that you want.

However, there’s also a Control section at the bottom, which opens up seven tabs of expert controls to get under the hood. Tabs for each band let you set the threshold and ratio, with the ability to use negative ratios allowing you to do standard downward compression or upwards expansion in the same slider.

There’s also an intelligent, adaptive algorithm for the attack and release times, where you can set the minimum and maximum values. This takes the crest factor (i.e. the difference between RMS and Peak) then works out whether to use a shorter or longer attack and release for the most transparent results. There’s also a Global tab where you can set whether the plug-in runs in parallel mode or processes the audio directly, plus sliders to control Channel Link and Peak vs RMS detection.

The bottom slider here, called Weighting, gives you the possibility to shape the sidechain input for each band, from single band on the left, to the full bandwidth signal on the right. Interestingly, the default and most of the presets stick to 50%, meaning each band will have a small influence on its neighbour.

It’s possible that you’ll already have the means to do multiband parallel compression in your DAW or with a third-party plug-in. If you don’t, then there are other, potentially cheaper options available to explore these techniques, or you may be able to combine plug-ins that you already have. 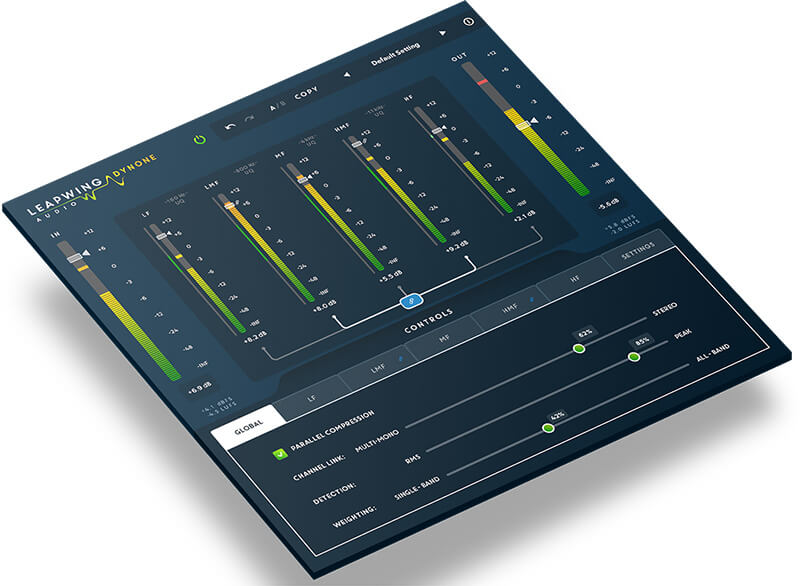 However, where DynOne really wins over the competition is in the quality of the sound, and how quick it is to use, both of which have made us reconsider how and where we might use this in our mixes. If you’re struggling to get loudness without audio compression artefacts, especially when mixing or mastering more delicate music, then this may potentially be the magic bullet you’ve been waiting for.

The final tab on the right is for Settings, with a Band Auto Gain switch that gives a volume boost when you’re using more extreme threshold and ratio settings. This is a slight help, but if you’re looking to volume match the whole plug-in, you’ll have to do it by hand using the output slider and bypass button.

As a helper, you can switch the output LUFS readout to Delta mode so that you can see the perceived volume difference between the input and output and use that as a guide. Alternatively, you can hold shift whilst dragging the Input slider to inversely control the Output, which will give you a form of volume matching, but it will also change how hard you’re driving the signal into the thresholds.

Most useful here is a quality switch for the Crossover Filters, and although you’ll want to use the Ultra Quality mode for mastering tasks, you also have the option of using a new Low Latency mode, with reduced CPU usage and a latency of less than two milliseconds.

The fact the full HQ mode is pretty processor-hungry makes the Low Latency mode especially useful for when you’re tracking, or working on a processor-heavy mix and have DynOne on multiple instruments or busses. You could potentially run all your instances in Low Latency, and then switch to HQ for a final offline bounce.

Overall, we were pleased to find the crisp Retina GUI to be very clear and easy to use, and the fact you can hide these expert controls helps you to focus more on the sound as you tweak and blend the volume of each band.

That being said, it would make things a little quicker and easier if the threshold controls were next to the meters, instead of a couple of clicks away in the Control tabs. It would also make the plug-in more flexible if you could change the crossovers for the filters, although we appreciate it may have been a deliberate, conscious decision to keep them fixed in order to create the most transparent results.

The results are in

To put it to the test, we loaded up several different mixes, including a delicate sounding TV cue and a more aggressive club track, and after setting up a sound we were happy with using DynOne, we attempted to recreate it using Fab Filter’s Pro-MB and the Dynamics module in Ozone 8.

Although we were able to get decent results with all three plug-ins, DynOne seemed to deal with heavy compression in the most transparent manor, and managed to retain the most consistent transient hits across the spectrum. It was also quite remarkable how it was able to bring up quieter details in the music cue using fairly heavy-handed settings, yet without many of the tell-tail signs of over-compression.

We really enjoyed our time using DynOne.One of the things that really stands out when using DynOne is the speed at which you can get really great sounding results, and by combining such transparent filters and compression with the ability to balance separate bands, it does the job of several plug-ins at once.

That said, if you’re looking to use parallel compression to add a bit more character and additional saturation, or a multiband for surgical control, then DynOne probably isn’t the optimum choice. However, if you want to transparently increase an element or mix, especially if you’re working on acoustic, orchestral, dialogue or more nuanced, subtle music, then this is a superb and highly flexible tool that has the ability to lift the quieter elements without destroying the overall dynamics and punch.

It’s also worth noting that one of mastering’s legendary figures, the great Bob Katz, has voiced his approval and support of the plug-in, even offering a handful of useful mastering presets! 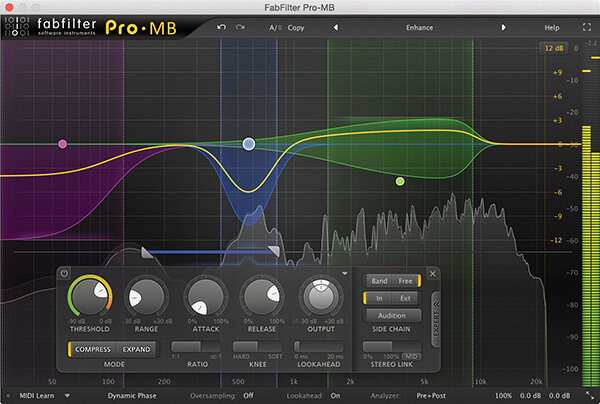 Pro-MB is our multiband of choice simply because it’s so flexible, with up to six movable bands of compression or expansion, adjustable slopes, and great visual feedback. Although
it sounds great, it can’t compete with DynOne on transparency.

If you want ultimate control over every conceivable parameter, then MDynamicsMB has it all, along with the kitchen sink. Six flexible bands of dynamics, plus a level follower, versatile sidechain and multiple crossover options.