In its original incarnation it was voted best synth of the year by you. So how well does SynthMaster One iOS transfer to the mobile world asks Andy Jones… (Answer: surprisingly well) Price £14.99 Contact KV331 Audio SynthMaster One iOS key features: Wavetable synth for iOS 500 presets 16 voices of polyphony AudioUnits V3 support […]

In its original incarnation it was voted best synth of the year by you. So how well does SynthMaster One iOS transfer to the mobile world asks Andy Jones… (Answer: surprisingly well) 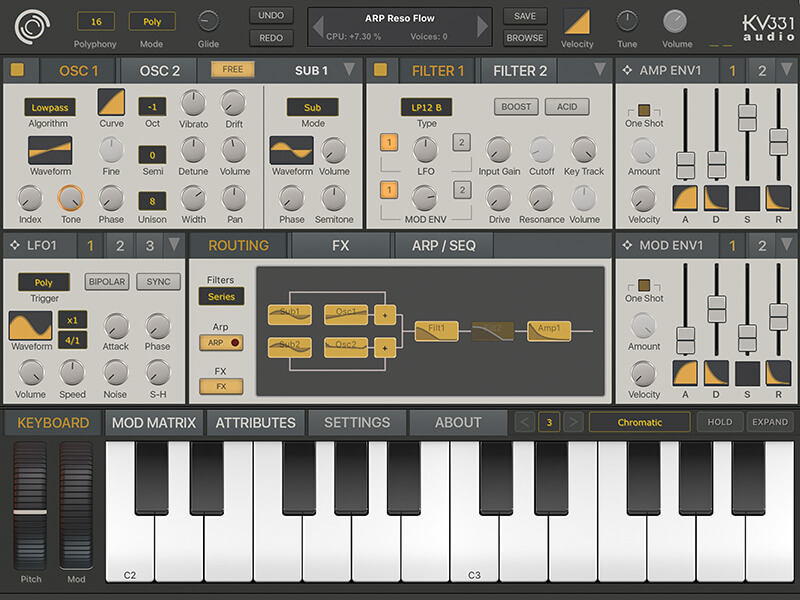 You love SynthMaster. Yes, you do, as the ’big’ version of the synth was voted Best Synth Of The Year a couple of years back in our Gear Of The Year Awards, as voted by you. Let me quickly explain the ’big’ version. Now at v2.9, SynthMaster is the full-on semi-modular featuring 1,700 presets, a huge modulation section, oodles of synthesis types and a fantastic ease of use considering its power. SynthMaster One is a kind of ‘easy’ version, with cut down presets and a more rounded GUI so you can really get your head around what is going on.

The all-new SynthMaster One iOS is a straight-up port of that for the iPad and that’s the one I have the pleasure of looking at today. (There are also various Academic versions, bundles, cross-grade offers and suchlike available within and across the different versions but you’re better off visiting KV331 Audio’s website for those, as life – and this review – is too short!). So what we have here is essentially a version of the best synth in the world, for iPad. What’s not to like?

SynthMaster One iOS is supposed to be a 64-bit-only iPad synth but I had it running on my old v34 32-bit iPad which led me to question the very generation and bit structure of it, but it’s quite definitely 32-bit. KV331 says, “Well, if it works, then that’s good!” Don’t you just love ’em, but we’d suggest 64-bit only (or late fourth gen at least.)

The synth has a very logical layout with signal flow from the oscillators, top left, through filter and envelopes with LFOs, effects and modulation along the bottom. The GUI is different from the desktop version which is understandable given the size restrictions of the standard iPad. So you get tabs to select different oscillators, envelopes and filters.

Along the middle these are used similarly to switch between LFOs and envelopes and the bigger areas of Effects, ARP/Seq and Routing, which will be familiar to any SynthMaster fan as it shows the structure of each sound in block form. Finally, at the bottom, more tabs are used to select the Keyboard, Mod Matrix and more global settings. Like I say, it’s all very logical and the desktop SynthMaster owners of any version will instantly be at home.

You might initially struggle to make some fine-tuning of the rotaries – they are quite small and my big fingers don’t help – but actually the parameter value you are altering is shown near the preset and you should get used to the ’feel’ of the rotaries and how much you need to adjust them.

It also helps that once you make contact with each control, that as long as you keep screen contact, you can adjust it away from
that control. Overall, I think that KV331 has struck a nice balance between having a lot of options and the ease of use of the synth.

I should quickly touch on the interaction between the iOS version and the desktop version. They use exactly the same algorithms and are designed to run in tandem, so presets are interchangeable between the two as are wavetables and waveforms. And talking of which, you get the same amount of these in the iOS version as your core sonic elements.

For anyone not familiar with SynthMaster’s main approach, single cycle waveforms can be used as the building blocks of the sound, but the real beauty is the wavetable which provides an oscillator with a set of these to cycle through. You can control how these wavetables are traversed either manually or by using LFOs or other modulation sources.

This gives you a lot to play with sonically and sounds that can really evolve dynamically. The wavetables that come with One also allow you to bring in other synthesis types and the sounds of other instruments, from organs to classic synths; or the metallic tones of FM to percussive and bass heavy hits. Overall, the SynthMaster strategy seems to be to have as many sonic ingredients as possible and this version is no exception – it has enough to master pretty much any sound you want. 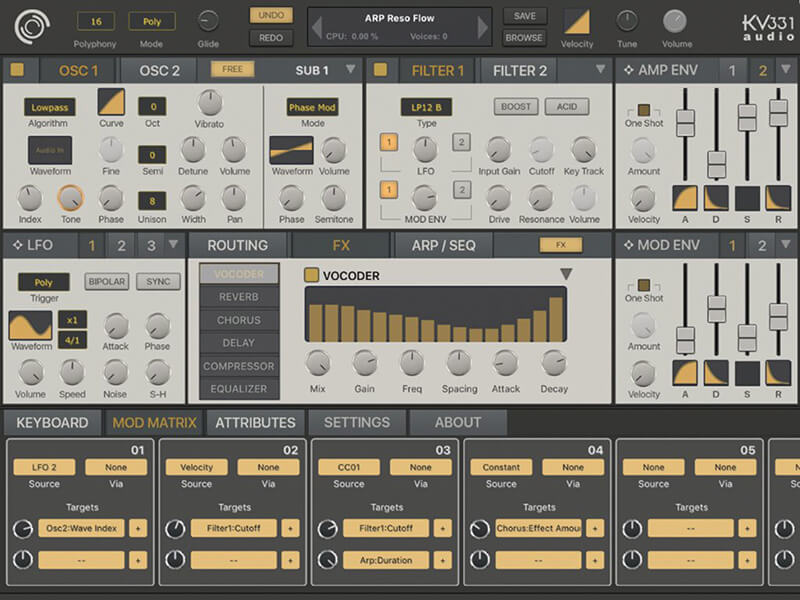 Nobody absolutely needs an iOS synth in their lives but they are great fun and getting much easier to not only run in iOS sequencers but also your desktop studio setups – not to mention being stupidly cheap. So if having all the appeal of a desktop synth in your iPad, er, app-eals (sorry!) then this is as good as it gets. It’s more than a match for its desktop brother, sounds as good and is totally touch-able. Sold?

This flexibility is maintained and enhanced when you hit the filter section with two on offer, each with a choice of four main types – modelled on famous synths like the 303, Moog, Oberheim and Korg MS-20 – and extra controls like Acid to bring even more of an analogue feel if necessary.

Suffice to say we have enough to get going with but there’s more and the Modulation Matrix deserves special mention, featuring a dozen blocks to set sources and destinations, all selectable with pop up and drop down menus.

The Arp/Seq section too is sublime with loads of options to how your repeated notes play – in sequences, in patterns, or however – but the best bit is that, not only can you touch edit with blocks on screen, the whole thing can then be magnified, making everything you do that much easier.

Finally six effect blocks allow you to insert distortion, EQ, compression, chorus, delay and reverb. Each effect comes with several parameters to adjust and, more often than not, a nice graphical representation of what you are doing.

You’ll want to switch to Browse Mode when selecting presets as you can – similar to many other synths like FM8 – choose by type, genre and author, to home in on what you want and there is plenty to get through. That arpeggiator certainly gets shown to full effect with a huge batch of ’press a key, hold and play’ presets that will lose you some hours in playing.

It’s really where SynthMaster excels and almost becomes a performance/live synth. It really is great fun to switch back to the synth screen and start fiddling with huge sequences and arpeggiations of which there are dozens.

There are a surprising number of non-synthetic sounds which utilise some of the different wavetables so you get a lot of good keyboard and string presets, but really SynthMaster is out and out electronics, so while there is a folder for guitar presets there’s only one in it and the brass sounds are (fortunately) programmed like Vangelis was involved. There is, then, something for any electronic producer and with the effects well employed, the wavetables adding realism and dynamics, it’s a great set of sounds overall.

I initially thought that two pages was way too much space to write about an iOS synth but, as it turns out, I could have done with another couple as this is one of the most fully-featured iOS synths out there.

SynthMaster One fans will obviously love it and while it lacks some of the presets of that synth and the full polyphony, the touch experience does make the iOS version nicer to use in some areas – the arp/sequencer especially. I have seen the odd iffy user review, commenting on issues using it in Cubasis.

I can’t say I have experienced any so far, but do make sure you keep the app updated. Otherwise, with its unquestionably great and very flexible sound, together with some of the most powerful synthesis features ever to go mobile (not to mention some incredibly neat ways of implementing them), for 15 quid you could almost justify getting yourself an iPad just to buy it. KV331 Audio has done it again. Best brush down the suits, there are more awards coming. 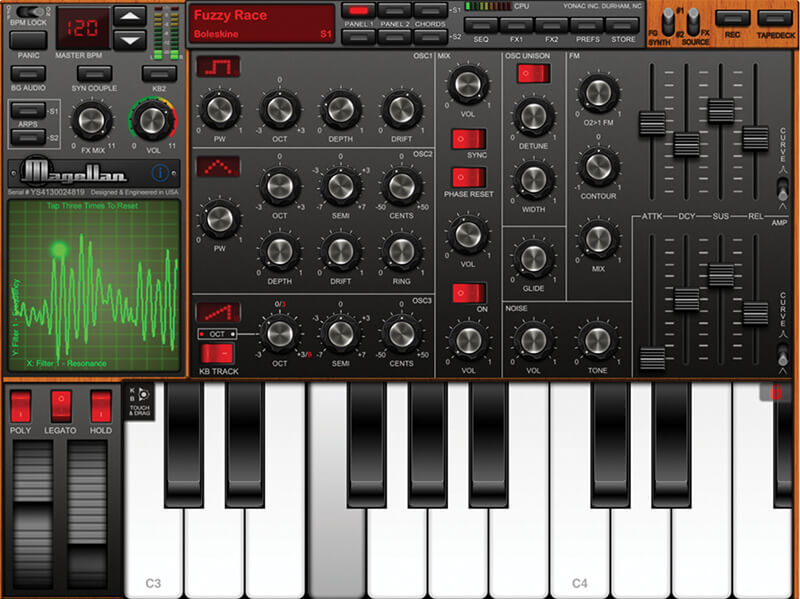 Magellan shares a few features with SynthMaster, not least the price and wide ranging presets. It’s not got quite the sonic oomph but still features two synth engines, each with three oscillators and two filters (with 11 types each). 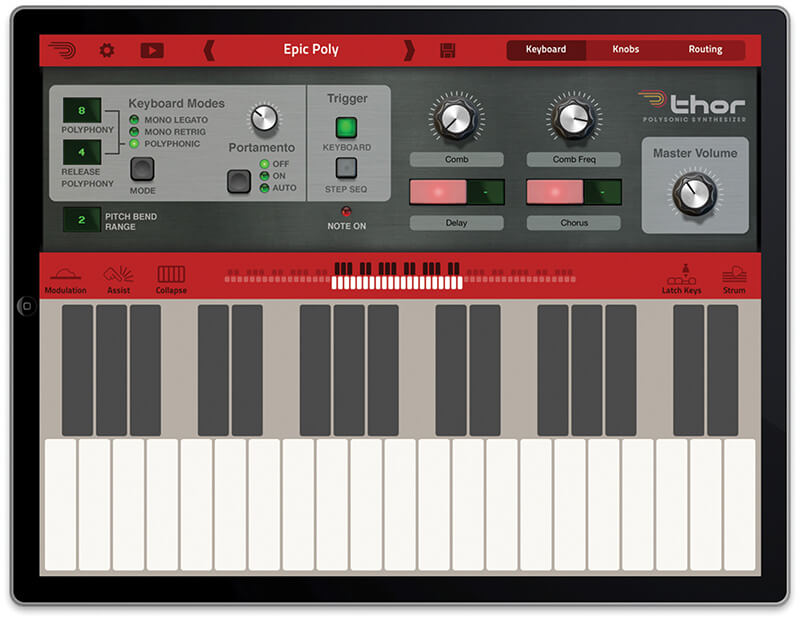 An oldie but a goodie, Thor is one of what you might call ’classic’ iOS synths. It has six oscillator types, four filters, envelopes, and LFOs and a sonic complexity that can rival SynthMaster One’s but so, thankfully, does its ease of use.