Live performers need hands-on control as well as great sounds. Hollin Jones finds out if Kurzweil’s Artis 7 can do the business… Details Kit Artis 7 Manufacturer Kurzweil Price £1,249 Distributor Sound Technology Contact 01462 480000 Web www.kurzweil.com Kurzweil has been in the business of making keyboard workstations and stage performance instruments almost as long as anyone, […] 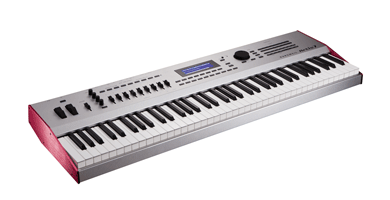 Live performers need hands-on control as well as great sounds. Hollin Jones finds out if Kurzweil’s Artis 7 can do the business… 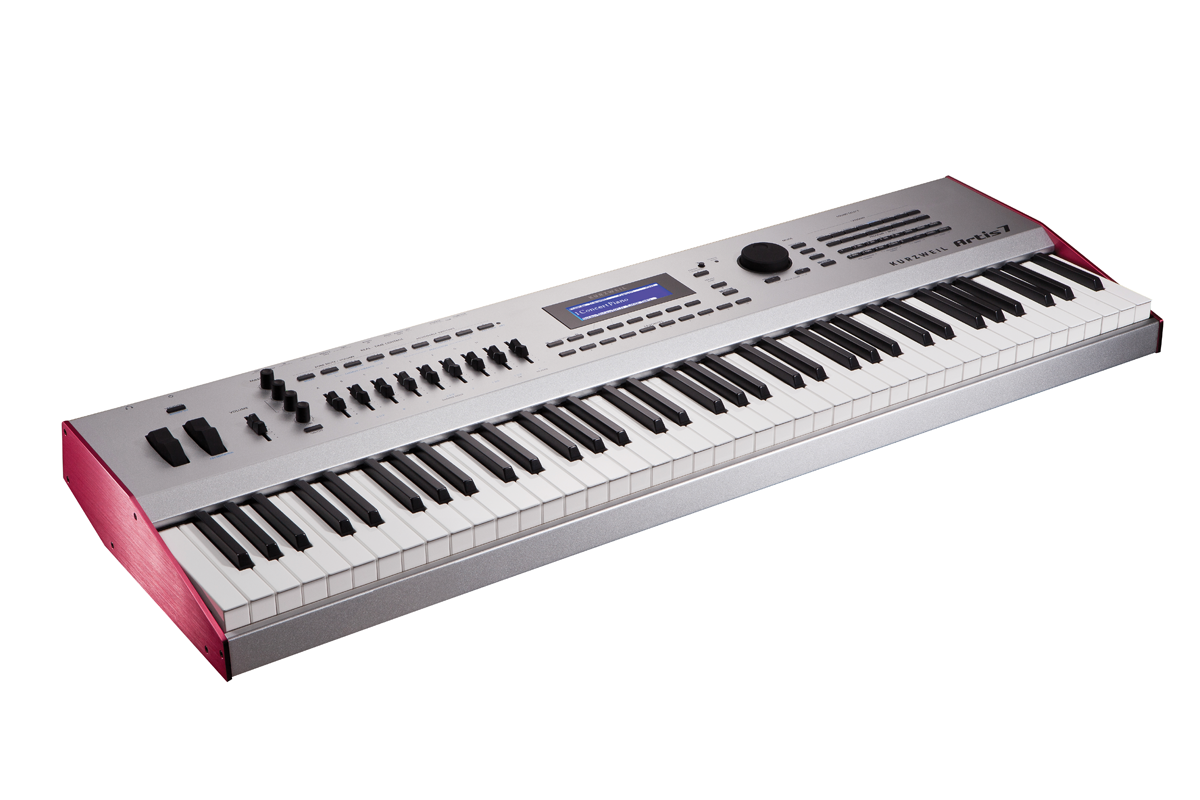 Kurzweil has been in the business of making keyboard workstations and stage performance instruments almost as long as anyone, and its products have graced countless stages around the world. While once it focused mostly on the top end of the market, these days it also makes keyboards that are more accessible to players whose budgets aren’t up there with those of a professional. The Artis 7 is a 76-key stage piano that’s designed to appeal to a wide range of users, from keen amateurs all the way through to gigging professionals.

Stage pianos aren’t often lightweight, and despite being a 76- rather than a full 88-key model, the Artis 7 feels solid to carry. The silver finish is quite unusual and works well, even if the top panel feels a little uninspiring to look at and the sliders and buttons could arguably feel a little higher in quality.

Around the back of the box, you’ll find the ins and outs – which are a little more spartan than you might get on a workstation, though this is of course a stage piano, so there’s a stereo jack audio out and headphones, but no multitrack outputs and no XLR connections. A mini audio jack input enables you to connect an external source, such as an iPod, and there’s 1×1 MIDI in and out for external gear.

Pedal Power
You get three pedal inputs: sustain, volume and a control pedal, and a sustain pedal is included in the box – which is nice because it’s not always the case, even with serious keyboards. As well as sustain and volume pedals, you can use the third one for getting more creative with the organ sounds and controlling swells, speaker speed and the like. As you might expect, there’s USB and this is quite flexible.

A flash stick can be connected for transferring data, and there’s a To Computer port, which enables the keyboard to work as a MIDI interface, sending data to and from your Mac or PC. It’s how software updates are handled, and enables various software interaction, of which more later.

The top panel of the keyboard is laid out sensibly, with many controls doubling up functions depending whether you are in regular or organ mode. Visual feedback comes from a 240×60 pixel monochrome display, which is serviceable and has function buttons to enable you to interact with it to perform setups, edits, layers, splits and other operations.

It’s not huge, though since this is largely used as a performance instrument you’re not likely to start trying to reprogram it in the middle of a gig. In terms of functionality, anyone who has used a stage piano or even a simple workstation before will recognise what’s going on. A Category section to the right enables you to select a type of sound, and within each one are a number of variations. These can be split and layered, as well as stored on 10 favourite slots. There are 256 factory and 256 user sound slots.

Plug & Play
Editing sounds over USB from your PC or Mac is a much faster way to work with multiple parameters at once than using a keyboard’s onboard screen. Here, you also get a VST/AU plug-in to communicate with the keyboard from inside your DAW and make advanced settings more easily.

Hands-on
The Artis 7 puts a lot of emphasis on real-time control of sounds, as you often need in live situations, and to this end there are a number of performer-friendly features to the left of the panel. The nine faders have dual functionality. In Regular mode, they control things such as reverb and effects levels, and when an organ sound is selected they become virtual drawbars. As elsewhere, these functions are labeled on the body of the keyboard, so you don’t have to try to remember what does what.

Additionally, the main screen lets you see what controls are assigned to physical items for any given patch. Above these are nine buttons, some of which can be assigned to control either a range of organ functions such as Leslie brake, chorus, key click and so on; or become zone mute and volume controls for when sounds are split across the keys.

Quick transpose and octave controls are provided – so important for live performance – and there’s a three-band EQ with an on/off control and physical knobs. Though it might sound simple, having a hands-on EQ that doesn’t require any kind of menu or screen interaction is really useful. Imagine you switch patches and suddenly the sound you are using lacks punch through the PA, when the last one didn’t. Rather than bugging the sound guy mid-song, just dial in some more bottom end yourself to beef things up. The modulation wheel doubles up as an organ distortion amount control, and there’s a variation button that also becomes a rotary speaker fast/slow toggle.

All in all, the performance controls are good, though there are a couple of omissions. There are 16 effects units and 1,000 effects chains, for example, but these can’t be edited in-keyboard. And organ key click sound is not variable: so it’s either on, which can sometimes be too intense, or off, which sounds a bit lackluster. Patch editing in any great detail can be fiddly on any keyboard screen, but thankfully Kurzweil gives you an alternative. Hook up to your Mac, PC or iPad via USB and use the respective free-to-download software application to tweak sounds, multis and setups using a much more advanced graphical interface.

This is something you’d almost certainly want to do before you turned up to a gig, rather than in the middle of a show, but it’s certainly a more effective way of interacting with the brain of the instrument. It also comes as a VST and AU plug-in for Mac and PC, which seems to be a more up-to-date version of the patch editor. The documentation is somewhat lacking as regards these editors, however.

Alternatives
Roland’s RD-300NX, at £1,199, has 88 ivory-feel weighted keys, 939 tones and 78 types of multi-effects, as well as an onboard WAV player. It has onboard rhythm playback and some real-time controls, though not as many as the Artis 7. I/O is similar, and it doesn’t come with a bundled pedal, though there is a software editor to enable you to make changes to the setup from your Mac or PC.

Sound Control
The onboard sounds are taken from the PC3 and KORE 64 expansion series, and include a new German Grand Piano model. As you’d expect, keyboard instruments feature heavily and there’s a good selection of classical and more modern pianos, jazz and upright models, as well as a range of electric pianos, clavis and strings.

The organ model covers Hammonds, Farfisas, church organs and more, and is fun and authentic-sounding to play, with the real-time controls making things much more interactive. Certainly, if you throw in an expression pedal for the rotor and swell speeds, things start to get really interesting.

For an instrument in this price bracket, some sounds don’t stand out as much as they could, and although the keyboard instruments generally work well, the guitars, brass, choirs and other usual suspects are often underwhelming. The drums, bass and percussion fare much better, though, and layering sounds together and adding effects chains can often help to bring some more life to proceedings. The Fatar keybed is a little springy, especially for organ runs, but it’s always tough to have a keyboard that copes as well with piano as with organ-based playing – two very different disciplines.

The Artis 7 is a solid performance instrument and has a good range of real-time controls that will be genuinely useful to players in gigging environments. The addition of software-based patch editors makes tweaking setups much easier than it would be if you were confined to the screen, and you can use it as a MIDI controller for your computer as well.

Some sounds could be a little more inspiring, though, and for this price you might ideally want a little more flexibility with your audio outputs. Nonetheless, it will serve you well as a studio- or stage-based tool covering a wide range of sounds. 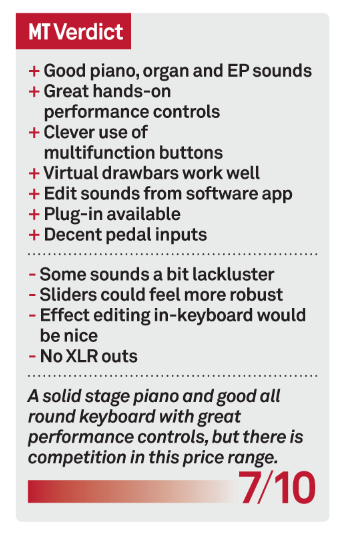