KRK has updated its range of subwoofers with three new units. Alex Holmes finds out if bass is in the place in this review of the latest KRK Subwoofers… Details Manufacturer KRK Price 8s £339, 10s £399, 12s £699 Contact 01494 462246 (Focusrite) Web www.krksys.com – www.focusrite.com Bass and low end is widely considered as […] 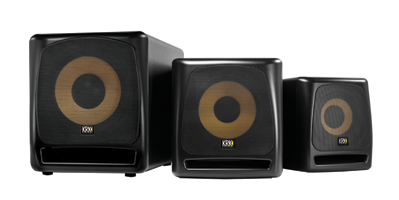 KRK has updated its range of subwoofers with three new units. Alex Holmes finds out if bass is in the place in this review of the latest KRK Subwoofers…

Bass and low end is widely considered as one of the trickiest elements of a mix to get right, and given the prominence that bass is given in modern music that means hard times for your average producer/engineer.

One of the issues, particularly in writing music aimed at the club or live environment, is it’s impossible to replicate in your own studio the visceral experience of standing in front of a massive stack of full-range speakers. Most nearfield monitors will go down to around 40Hz, with the larger models going a little lower, but they’re not reproducing these frequencies with great finesse.

To truly represent the low end in all its glory, you’ll want to add a dedicated subwoofer that can extend down to 30Hz and take the heavy-lifting work away from your main monitors.

There’s often a misconception that adding a sub will suddenly give you trouser-flapping bass that will annoy your neighbours, and while they’re certainly capable of that, a well-balanced system will actually be fairly unnoticeable and just smoothly extend down into the frequency nether regions.

Depending on how big your room is, you’ll want to get an appropriate-sized sub speaker, so as not to totally swamp your main monitors. KRK’s new V Series 2 range now includes four different models covering eight-inch, 10-inch and two 12-inch subs, making it easier than ever to get a suitable fit for your studio.

We’ve been using the older KRK subwoofers (10s) for over five years now, and were keen to see how the new models stacked up as we took delivery of three large boxes containing the 8s2, 10s2 and 12s2 models. There’s also a flagship 12sHO model, but that weighs almost as much as the other three combined so for this review, we’re just going to look at the others.

The new designs have a sleek, curved look and trademark yellow woofer (made from glass-Aramid composite on the 8s and 10s, and from Kevlar on the 12s) that mimics KRKs Rokit, VXT and Expose monitors. This curved baffle isn’t just for show, however, and helps to eliminate diffraction distortion.

There’s also a front-facing port that helps to provide low-frequency extension while avoiding firing too much bass at the walls, which will colour the mix. You also have a detachable metal grille, although it’s recommended that you keep it fixed on if the sub is likely to be in range of a potential kicking!

As you would expect, the models of KRK Subwoofers increase in size and weight as they go up, with the 8s weighing in at a reasonable 11.8kg, the 10s at 17.7kg, and the 12s at a back-breaking 30.14kg. Of course, you’re unlikely to actually move the sub once it’s set up, but be aware that the 12s is quite a beast at just under half-a-metre square, so you’ll need a fair amount of space if you’re looking to add one to your setup.

Around the back, you’ll find several stereo connections, including unbalanced RCA inputs for home audio and DJ equipment, balanced TRS jack and XLR inputs for a mixer or audio interface, and balanced TRS and XLR outputs that send the signal to your nearfield monitors.

This is an improvement on the previous design on the 10s, which lacked the option to use balanced outputs. The full-range stereo signal comes in to the sub and is then split using a high-pass filter and an accompanying dial for selecting 60, 70, 80 or 90Hz as the crossover point.

Then the resulting audio, minus the low end, is sent to your monitors. Typically, it’s recommended that the crossover is double the lowest response of your main speakers, so around 80Hz is a good starting point.

Although having just four settings makes it easier to compare, it seems like a step back from the sweepable dial found on the older models, which offered more finesse for fine-tuning the sub to your setup and room. To round things off on the input side of things, the 10s and 12s also have LFE (Low Frequency Effects) connection, intended for use with a 5.1 Surround system.

Other controls include a Volume knob for balancing the levels with your main speakers; an Input Sensitivity switch that can be bumped from normal to high for connecting consumer electronics; a Polarity switch that can be set to 0 or 180 degrees in order to combat phase issues, and Ground Lift to help eliminate electrical noise.

As a nice new feature, there’s also a power-saving Standby option that mutes the subwoofer after 30 minutes of not receiving a signal. Finally, you have the option of connecting a footswitch to quickly bypass the sub and hear just the main monitors. As a nice touch as well as an upgrade on the previous models, this now bypasses the crossover circuit, so you can go straight to the full-range output of your speakers. Although a footswitch pedal isn’t included, you can use any old quarter-inch guitar-switch pedal if you’ve got one lying around.

There’s no shortage of options when it comes to picking a subwoofer to complement your existing setup. On the budget side, there’s the Fame RPM 10S Pro Series Active Subwoofer (£156), but the frequency response only goes down to 45Hz.

It’s worth noting that all three subs technically extend a little lower down than this, but the volume rolls off steeply. We loaded up a bunch of bass-heavy dance tracks that we knew intimately and fired up each sub in turn with similar settings, to compare the results.

The 8s gave a significant boost to our KRK V6 speakers, filling in some low end which, from a volume perspective, easily filled our medium-sized studio. The low end was punchy, but couldn’t quite do justice to the full weight of the lower sub frequencies and we couldn’t ‘feel’ it as much.

That said, if you’re willing to put in the time to fine-tune it, some careful use of the boundary effect by placing the sub close to a wall could actually help improve the power of the sound. The 10s fared better, and the improved, deeper frequency response and cabinet design provided a slightly more punchy sound than our older 10s model.

Finally, the 12s was unsurprisingly the most satisfying of the three, with a more noticeable smoothness to the frequency distribution and crossover, and more weight and power that filled the room, yet still retained the transient punch of the kicks and bass.

To double-check the frequency responses, we also played a sine sweep through the system using FuzzMeasure Pro, and recorded the results with a measurement microphone. As expected, you could see extra bass extension and slightly smoother peaks on the 12s on the resulting graph, but all three subs gave solid results.

Your decision will be largely based on the size and frequency response of your current monitors, and the size of your room. If you’re mixing extremely bass-heavy music with fundamentals that often go below 40Hz, then you might be best off looking to invest in the larger models that will give you the clearest representation of hearing those frequencies in a club.

However, for most genres, you probably won’t be going quite so low, so you may find the other models are adequate.

The 8s is a decent, feature-rich option for anyone with a smaller studio who mixes more traditional music. However, if you have the space and can afford the extra £60, the 10s will give significantly better and smoother results.

The 12s is quite a hike up in price, so you may want to audition it alongside some other units, but if you’re after a deeper, louder and more even response, then it definitely delivers. Overall, though, all three models are well thought out and designed, with a few useful features you won’t find elsewhere 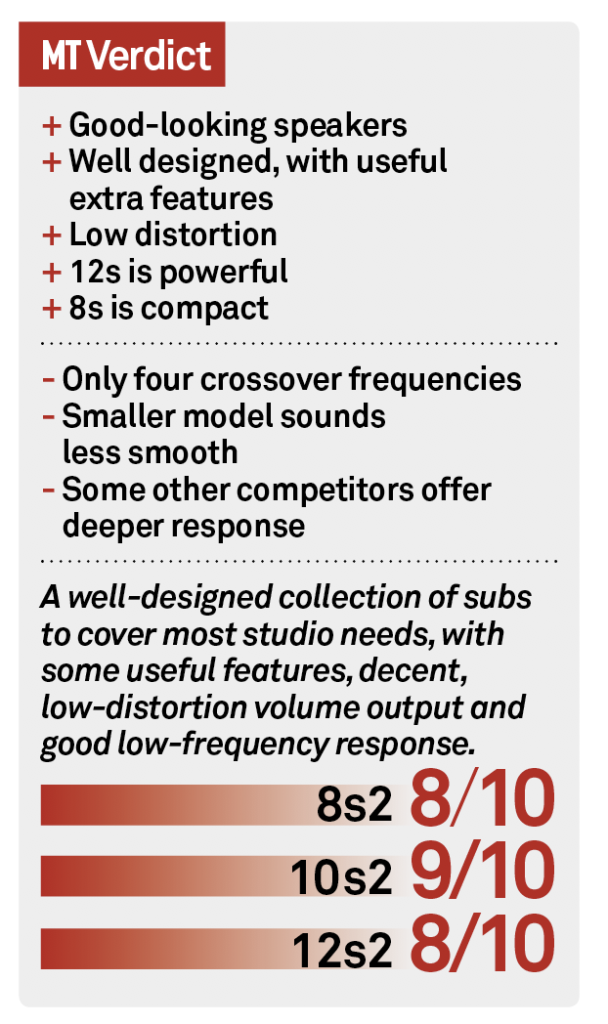