Swedish developer Klevgrand releases its most ambitious plugin yet: a soft synth that generates realistic yet otherworldly sounding wavetables from real audio. 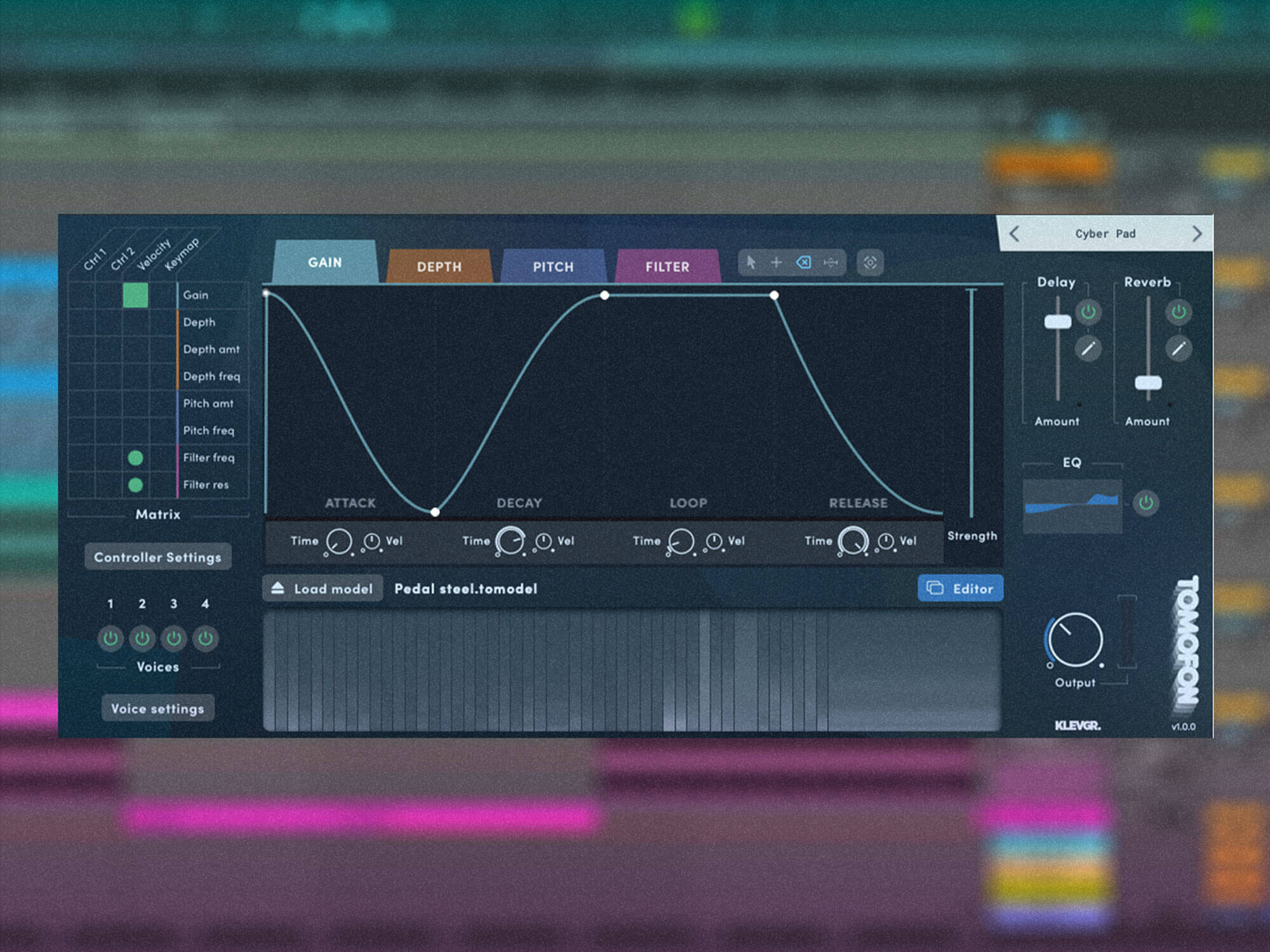 Since 2014, Klevgrand has been quietly releasing effects and instruments plugins and iOS apps. The company’s output trends towards the quirky and niche with clear and intuitive visual design. Much like fellow Swedish brand Teenage Engineering, its products are immediately recognisable and similarly unique. Tomofon, its latest desktop plugin release, feels like a step up for the development house, both in terms of application – it’s a full-on synthesizer, not a single-operation instrument – as well as in scope, with a rather groundbreaking sound engine at its core.

Klevgrand is calling Tomofon a real audio synthesizer. No, not the 1990s computer audio format (now that would be quirky) but real as in actual audio. Most wavetable synths convert samples into a limited number of waves that, when scanned, approximate changes in timbres that occur over time. Tomofon uses a similar approach but generates many, many more waves per table, giving more realistic results.

This super wavetable is called an Audio Model, and it’s displayed across the bottom of Tomofon’s main panel. There are pitch zones, which usually conform to individual notes (although they don’t have to) and changes in expression over time, visualized vertically. Brighter areas indicate louder passages, with quieter ones darker. Morphing between different individual waves, Tomofon creates a sound that is smooth and oftentimes very realistic, and yet also uncannily artificial, much like an AI-created photograph. It’s an utterly unique sound engine and the driving impetus behind why you would want it.

Tomofon is not a sampler, meant to recreate sound perfectly. It’s a synthesizer that uses the Audio Model as an oscillator, the block of clay from which to further mold. This moulding happens in the envelope area, which comprises four sections: Gain, Depth, Pitch and Filter. Each of these has a rather clever envelope, with editable breakpoints to help shape it. There are four sections, Attack, Decay, Loop (replacing a sustain portion) and Release, with each having its own Time and Velocity knobs. Decoupling the shape of the envelope from its time is incredibly useful and it’s a wonder that this isn’t standard. The looping sustain section is also a godsend, able to generate rhythmic patterns much like an LFO. Speaking of, all save the Filter have dedicated LFOs. You might miss this at first but the loopable envelope goes a long way towards replicating this effect.

While Gain, Pitch and Filter do what you’d expect, the Depth section is unique and so should have its own explanation. For Tomofon, Depth refers to the changes in timbre over time. It’s here that you set how it scans through each wavetable. Along with the envelope, there’s a regular LFO for smooth oscillations as well as a sample and hold section for introducing randomness, whether subtle or outrageous.

Lastly, there’s an effects section with editable Delay and Reverb plus an EQ for final tonal shaping. Given Klevgrand’s impressive stable of effects plugins, it would have been nice to see more included here. The Drive in the Filter is capable of adding some delicious distortion though. 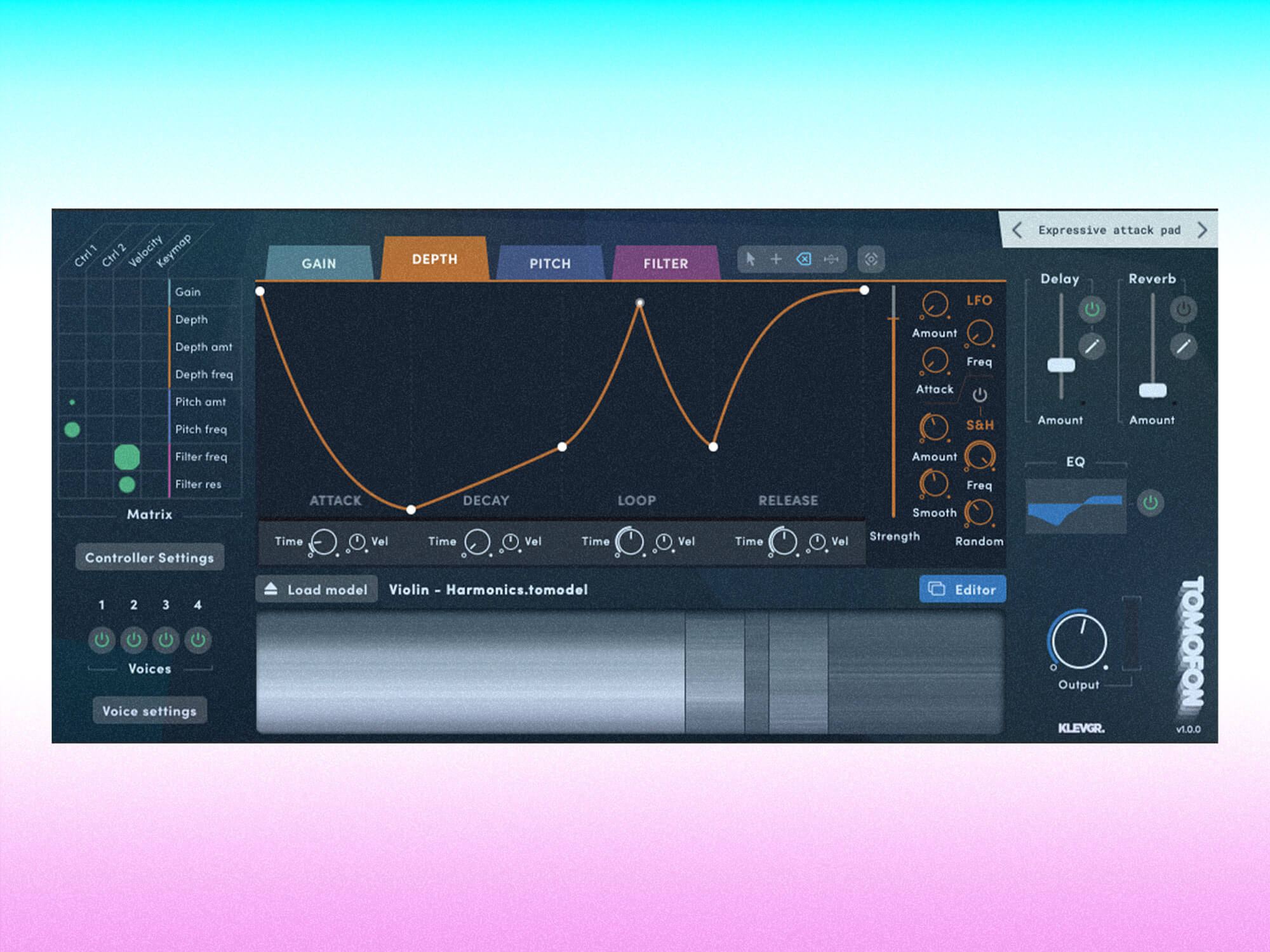 With such expressive audio, it’s no wonder that Tomofon has many functions geared towards performance. The Mod Matrix allows you to affect different sections with two assignable controllers, such as your controller mod wheel, as well as velocity and key map. Unfortunately, there are no free-standing LFOs or step sequencers in Tomofon, only the dedicated LFOs in the various sections, so you can’t set LFO destinations here, which is a shame.

You’re free to load new Audio Models (either one of the supplied 119 or your own) from the front panel but for deeper control, click on the Editor button. Here you can import new audio – Tomofon prefers monophonic information although polyphonic material can yield some unusual results – as well as tell Tomofon what to do with it. Options range from completely automated to full-on manual. There’s a bit of a learning curve – it’s a brand-new technology, after all – but those who like making their own wavetables in Serum and similar instruments will have a ball here. 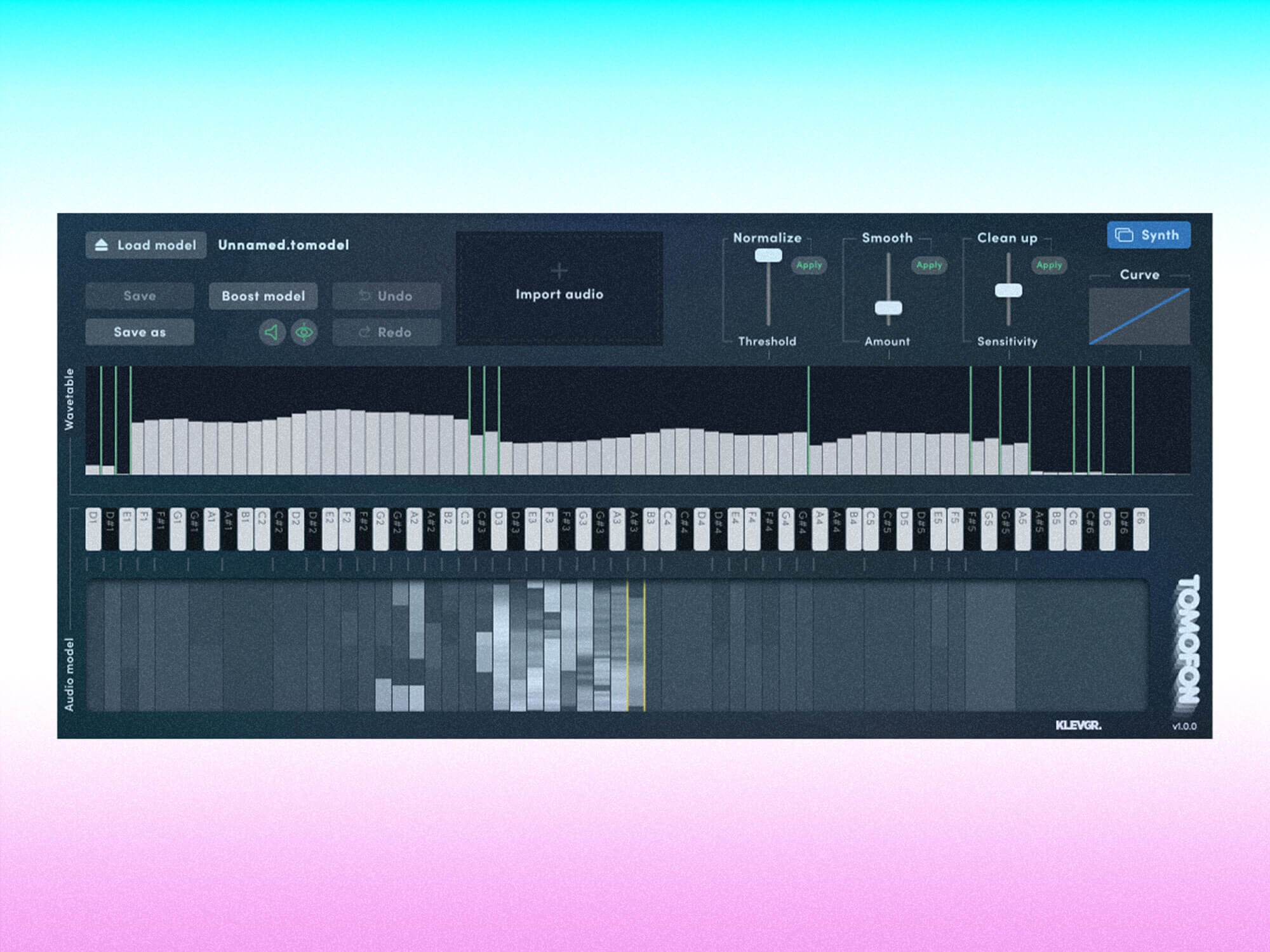 Tomofon is an impressive leap forward for Klevgrand. The Audio Model sound engine is breathtaking in sound and great fun to play with. Although you’re often starting with an acoustic source, the end result can be anything but. Many of the synth-style presets are actually just clarinets and human voices!

Despite its incredible audio technology, Tomofon isn’t perfect. Although you can pile on multiple voices of the same Audio Engine, we’d love to be able to layer two or three oscillators like Arturia’s Pigments. The plugin is also not resizable. Having some more real estate – especially in the editor section – would be welcome. Hopefully future updates will see it grow into the formidable powerhouse it’s meant to be.

Being able to manipulate highly realistic audio like a synthesizer opens up all kinds of interesting sound design possibilities. It’s exciting to see just how far from the source you can get, making it perfect for those working in more experimental genres of music or doing sound design. With such a unique sound engine, you should download a demo and see if it’s right for you. You might just find yourself inspired by a quirky Swedish software developer.