The Kemper Profiling Amp is a complex and brilliant piece of guitar tech. Marcus Leadley gets the new update to see if it improves on perfection… Details Manufacturer Kemper GmbH Price  £1149; PowerHead with integral 600w amp £1499; Profiling amp plus Profiler Remote package £1529; PowerHead plus remote £1899; Profiler Remote €499 (currently only available […] 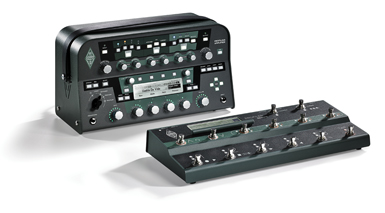 The Kemper Profiling Amp is a complex and brilliant piece of guitar tech. Marcus Leadley gets the new update to see if it improves on perfection… 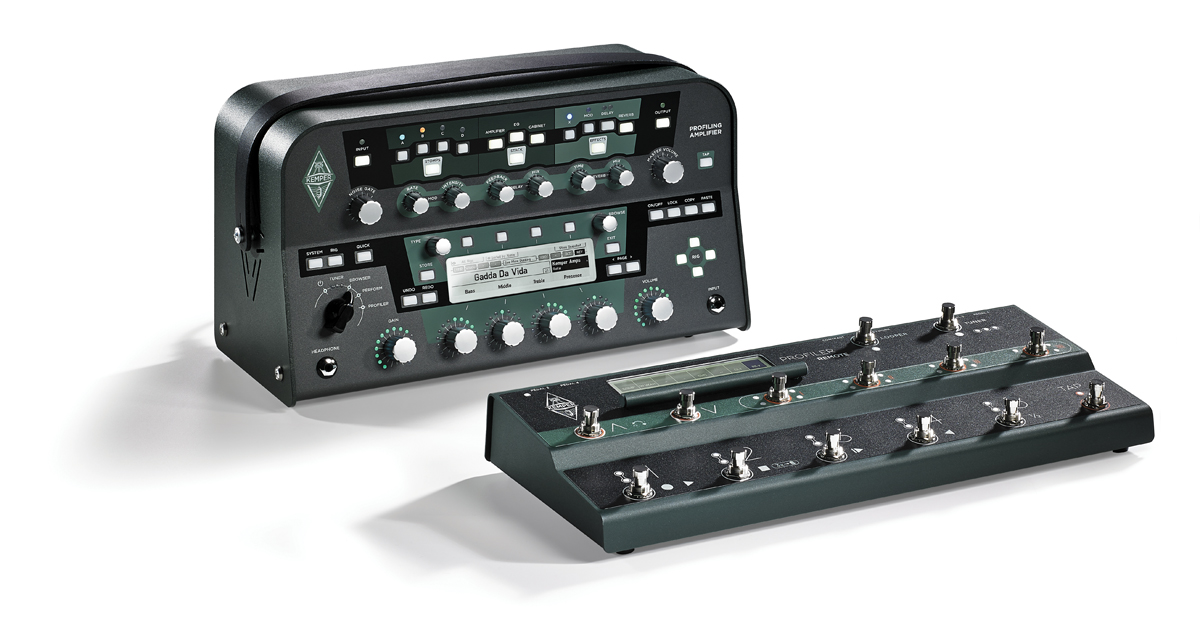 Kemper’s Profiling Amplifier is a powerful device that provides players and producers with access to a vast library of modelled guitar amps, effects and signal chains – called Rigs in Kemper-speak. What sets the device apart from any other amp modeller is its ability to create models – Profiles in Kemper-speak – of any amp you have access to.

A lot has changed since I first reviewed a Kemper in 2012. As well as new amps, effects and refinements to the actual profiling algorithm, the big stories have been the software release for Performance Mode, which enables you to manage Rigs in groups for live playing, the inclusion of a library of bass amps and cabinets, the option of an integral 600W solid-state power amp, and the arrival of a rack mount version with all the same features.

The release of firmware version 3.0 adds some exciting functionality: the ability to create Direct Profiles for amps on their own without a cabinet; to separate existing Studio Profiles into separate amp and cabinet models, and to combine separate amps and cabinets into Merged Profiles. 3.0 also enables you to use the new Profiler Remote with the amp. As well as putting a powerful arsenal of guitar and bass sounds at your feet, this also adds a looper function.

As I pointed out back in 2012, it looks pretty complex: there are 16 knobs and 38 buttons! While the logic is relatively straightforward the download of the so-called Deeper View manual is essential reading. The Kemper currently ships preloaded with 402 Factory Rigs. Some feature individual amp models, while others are setups with effects, and 49 new Direct Profiles are included.

Existing Rigs can be edited and new ones created or downloaded from the Kemper site. There is a very complete effects section organised into mono stomp-box style modules you can chain together in front of the amp module, and a range of stereo reverbs, delays and modulation effects for post-amp applications. Then we have the Profiler and Performance Mode – where you can collate groups of five Rigs together (125 memory locations in total) for easy access using the Profiler Remote. 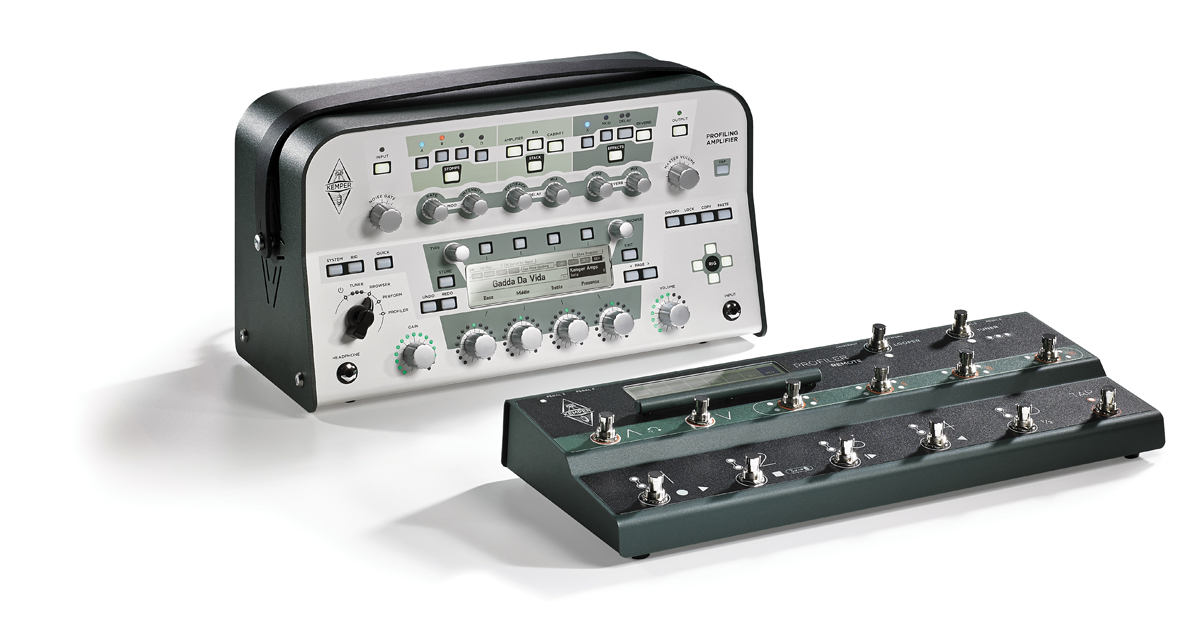 With 16 knobs and 38 buttons, there’s a lot to get to grips with on the Kemper

Get Connected
The Kemper offers a fantastic range of options for studio and live integration. Monitor Out is where you connect a power amp and cab. It can be hooked up to a desk via the Main Outputs. During profiling, an amp’s input is connected to the Direct Out, and when this is used with the Return Input you have an effects loop.

And you can patch the Direct Out to your DAW if you want to record a clean signal; then S/PDIF can be used to connect the Kemper to an interface so it can then be used as a digital reamping tool.

There’s also MIDI in/out/thru and a pair of Switch/Pedal inputs. This last feature essentially predates the release of the Profiler Remote, which connects to the Network port, and you can plug in four additional pedals for controlling effect parameters and to engage or disengage effect modules. Backing up sounds, loading new Rigs and performing system upgrades is handled via USB.

In Use
Overall, the front panel design is well thought out; the upper section is dedicated primarily to effects. The central region hosts the Rig management and browsing controls and the unit’s display. The lower part provides familiar amp controls such as Gain, Bass, Middle, Treble and Presence – so the amp’s basic analogue functionality is straightforward.

My unit was running firmware version 2.7 so I immediately had to update it. This was simple to do using a memory stick (which the Kemper formats) and the downloaded kaos.bin archive. I was also able to transfer the Profiles I created for my 2012 review. This took some time to figure out: individual Rigs needed to be saved initially as a separate Favourites list or separated from the general backup using Kemper’s Rig Manager software.

In terms of sounds, the best place to start is with the 49 new Merged Rigs as these showcase the results of the latest profiling algorithm and the benefits of the Direct Amp profiles. With a Merged Rig you get the Studio Profile (amp and cabinet modelled together) but when you switch off the Cabinet Module you get the ‘amp only’ Direct Profile – very useful if you plan to output the Profile to a physical cabinet. While the Kemper has always sounded good, these new

Merged Rigs really do sound excellent. Created by the likes of producer Michael Wagener (Metallica, Poison, Alice Cooper, Janet Jackson), guitarists Michael Britt and Gundy Keller, Deadlight Studio and The Amp factory there is a slight bias towards metal and hard rock tones (I challenge anyone to play through Daylight’s MarsVMOD1 Hi Sue Profile and not crack a smile), there are plenty of cracking clean Profiles and all points between.

For example, Britt’s MB5153 Ch1 is a fine example of an amp on the edge of its break-up tone – so it’s clean and sweet when played gently, and aggressive and bluesy when you hit harder. The performance has a very authentic valve-like character.

Profiling
With so many classic amp Profiles why do you need to make your own? If you happen to have a collection of classic amps of course you’ll want them to come to the party. Also the list of available Profiles doesn’t include a lot of the more rare, eccentric of simply average amps – that still have a role to play in the history of rock’n’roll – so there’s a whole collection to develop.

For a studio the appeal is obvious: every amp that enters the establishment has the potential to become an element of a custom library. Profiling is relatively simple and it’s highly addictive – however getting good results isn’t as simple as it might appear. 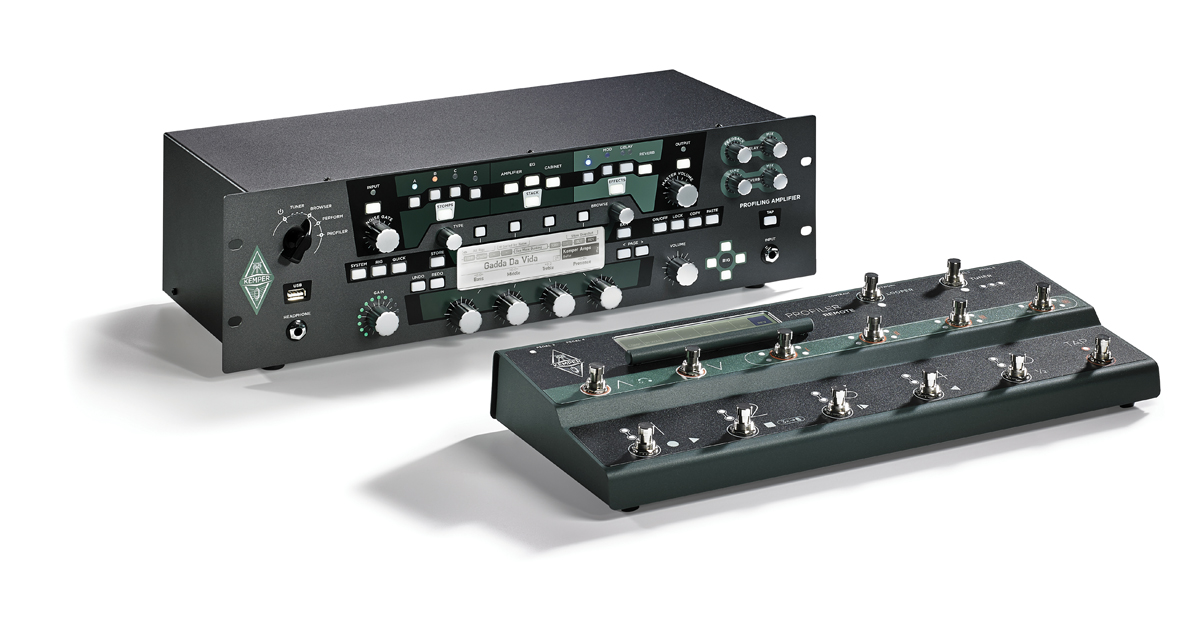 The rackmount version pairs nicely with the optional foot pedal board

Creating a Studio Profile is a relatively simple operation. Having mic’ed your combo or cabinet via the Kemper’s Return Input and connected the Direct Out to the amp you’re profiling, you select a Factory Rig with similar character and A/B match the studio monitor outputs. This ensures you don’t get a major volume discrepancy when you scroll through the Rig library later. Hitting the Profile button sends three different bursts of sound to the amp. The Kemper analyses how the amp reproduces them and about a minute later you have a Profile to listen to.

While the Kemper is designed so you can clean up a distorted profile or drive a clean one you really need to create multiple Profiles to achieve a degree of authenticity: clean, crunch and drive being the basic requirements. The Kemper itself has only has one mic return and no phantom power, so without additional outboard, you can only use a single dynamic or ribbon mic. Close mic’ing with a Shure SM57 will work, but as the character of the microphone becomes part of a
Profile, all the arcane knowledge associated with pulling great guitar sounds still has a part to play.

Creating a Direct Profile creates another set of challenges; you need to insert a suitable DI between the amp’s Speaker Out and the cabinet and connect the DI’s output to the Kemper’s Return Input. The test tones are sent direct from the Kemper to the head’s guitar input. The resulting profile is then used to drive your cabinet using a neutral sounding solid-state amp.

The results are impressive, so for example, if you have a temperamental vintage Marshall or Hi Watt head that you’d really rather not be leaving in a van overnight, here’s how you get the best approximation of the sound in a reliable and replaceable package.

For chaining modules in front of the amp Profile, you have the four-module mono Stomp section. For placement after the amp there’s another four-module section: three are allocated for stereo delays, reverbs and modulation effect and there’s a module where you can place one pedal model. The effects’ interface is well designed and has good colour coding (even the display changes colour) to let you know what you’re selecting or editing. Generally speaking, the effects sound very good. Although surprisingly, the Kemper lacks a range of classic amp spring reverbs.

Profiler Remote
With its all-metal construction, the Profiler Remote seems like an indestructible piece of kit. The buttons are labelled 1–5, which enables you to select five different Rigs – and these are assigned to switchable banks. A further four buttons turn effects on and off.

There’s a dedicated button that takes you straight to tuner mode ,and a tap tempo button for working with delays, phasers and flangers. Finally, there”s the looper button – pressing this reassigns the Rig and Bank switches to act as looper controls.

The Profiler Remote interfaces seamlessly with the Profiling amp’s Performance module to create an incredible powerful and musical live sound solution. The stereo looper is definitely an added value feature, but there are many other units out there with a greater level of functionality.

It can be assigned in both pre-and post-amp/effect locations and you can perform any number of overdubs, un-dos and re-dos, but it’s limited to 30 seconds of recording time and it can’t store loops, so it’s really a tool for generating ideas and for live performance applications. It is, however, very easy to use and fun to play with.

Conclusion
The Profiling Amp is a unique product with wide range of applications. It’s at home on the road or in the studio and offers guitarists, engineers and producers the ability to create amp models or access a vast library of set-ups. Thoroughly recommended. 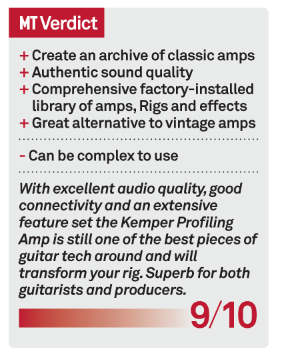