Need a vast range of tones or want to make your own? Kemper might have the amp for you. Marcus Leadley keeps a high profile. 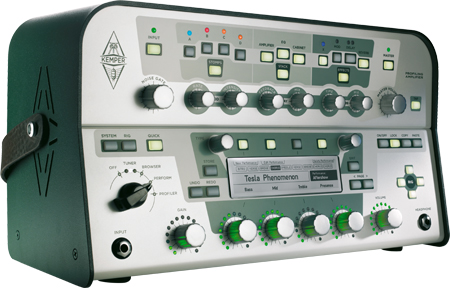 Christoph Kemper is a new name in guitar amp circles but he’s been associated with Access Music’s Virus synths for over 15 years. His entry into the guitar tech market has earned him an MIPA Innovation Award – so there are serious reasons for paying attention.

What’s new? Existing amp modellers provide emulations of classic amps (and creative custom solutions) complete with the cabinet and mic models that authenticate the audio profile. However, no company has yet offered the front-end technology to let you model amps yourself – and this is where Kemper takes over.

With its future-retro styling, 16 knobs and 38 buttons, the Kemper Profiling Amplifier looks highly complex. Thankfully, the logic is relatively straightforward. There are three distinct feature sets: a factory-installed library of signal chains (Rigs) which range from individual amp models to more developed combinations with pre- and post-amp effects; the tools you need for modelling (Kemper calls this profiling) amps yourself; and an effects section for building your own Rigs. The software for a fourth performance option, whereby you will be able to manage Rigs in groups for live playing, is still being written.

The main outputs for the desk or PA are on 1/4-inch jacks or XLR connectors. Monitor out is where you connect a power amp/cab for stage use.  The Direct Out serves a number of functions: during profiling you connect this to your amp’s input to feed it the test signals; used in conjunction with the Return Input it constitutes an effect loop so you can incorporate your own outboard; and as it mirrors your DI signal, you can patch it direct to your DAW and record a clean signal. This means that you can use the Kemper as a digital reamping solution if you subsequently hook up the unit as an external via the S/PDIF in/out. The Return Input is also where you connect a microphone for profiling.

There’s also MIDI in/out/thru and a pair of Switch/Pedal inputs for controlling onboard volume or wah effects or to switch effect modules on and off. The USB port takes standard memory sticks for backing up your sounds, and loading new Rigs or the system upgrades you can download.

According to the Kemper website the amp can store literally thousands of Rigs. The test unit arrived loaded with around 200. A further online investigation revealed 44 pages of additional downloads and Kemper is encouraging users to share. You can choose from a seemingly endless parade of classic and boutique profiles: Marshall, Matchless, Bogner, Vox and…well, you name it. The basic amp emulations impress the most, but there are plenty of over-the-top options to demonstrate the unit’s potential.  We can easily imagine using many of these sounds in the studio, although nothing in the box actually sounds exactly like the amps we use every day – which brings us to the joy of profiling.

We find amp modellers useful in the studio as they provide access to the consensus view of what most people agree are the ‘best’ guitar sounds. To profile an amp you mic the cab in time-honoured fashion. The Kemper has only one mic return and no phantom power, so without additional outboard you are constrained to a single dynamic or ribbon. However, close-mic’ing with an SM57 has worked for generations of engineers. Having plugged a guitar into the front of the Kemper and connected the Direct Out to the amp you’re profiling, you select an existing Kemper Rig with similar character – clean or overdriven – and roughly A/B match the studio monitor outputs. This ensures that you don’t get a major volume discrepancy when you scroll through the Rig library later.

Having made sure that the Kemper isn’t peaking, hit the Profile button. The process takes about a minute, during which time three different bursts of tone are sent and returned.  You can then A/B your original amp sound with the profile. Ideally, you need to have the actual amp in a separate room to isolate its direct output. You can refine distorted profiles by playing 20 seconds or so of power chords to give the Kemper further transients to analyse.

Profiling all three of our test amps (a Gibson Goldtone, an Orange AD15 and a Music Man 112RD combo) yielded excellent results – this system captures the tone and character remarkably well. One of the unusual things about the Goldtone combo is that it features both a 12-inch and a 10-inch speaker so you have two different close-mic characters. The Kemper even managed to capture this difference. Putting a mixer into the system and combining dynamic and condenser mics created an excellent rendition of the overall live tone – still a mono profile, of course.

The Kemper also offers a comprehensive set of controls to modify profiles, including Definition, Power Sagging, Tube Shape and EQ, and you can swap different cabinet models in an out. We didn’t feel the need to tweak either the Gibson or Orange profiles as they sounded great from the off. However, adjusting the Music Man profile made it far more flexible than the original amp, which has a limited range of applications. Once you’re happy with a profile it’s easy to create more. It took us half a day to create a set of Rigs that put all our signature sounds – and several new variations – at our fingertips.

The Kemper is also a studio-quality effects unit. For placement in front of the amp profile you have the four-module mono Stomp section for pedal-style effects. There are loads of vintage models to choose from –distortion, chorus, vibrato, delay etc.  Effect types are colour-coded and both the main screen and the module indicators change colour to show the current selection. For placement after the amp there is another four-module section for stereo delays, modulation effects and reverbs. You can also add a single effect from the Stomp menu here. These post-amp effects also have dedicated front-panel controls for fine-tuning. Auditioning effects is simple and we were able to create both basic and seriously processed Rigs very quickly. Everything is displayed onscreen and modules are easy to bypass – essential when you’re sculpting sounds.

The Kemper Profiling Amplifier is a unique product that enables you to build up a signature library of amplifier models and effect setups. The audio quality is excellent, connectivity good, and the interface is easy to understand. There are plenty of modelling amps out there, but nothing quite like the Kemper.