It’s a standalone mixer, an interface, a controller; it works with Mac, Windows, iOS; it has onboard effects… it looks like the K-Mix does it all. Martin Delaney looks through the K-hole… Details Manufacturer Keith McMillen Instruments Price £639/$579 Contact www.keithmcmillen.com Keith McMillen Instruments has a history of thinking outside the box, and has created […] 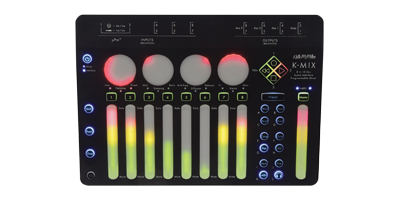 It’s a standalone mixer, an interface, a controller; it works with Mac, Windows, iOS; it has onboard effects… it looks like the K-Mix does it all. Martin Delaney looks through the K-hole… 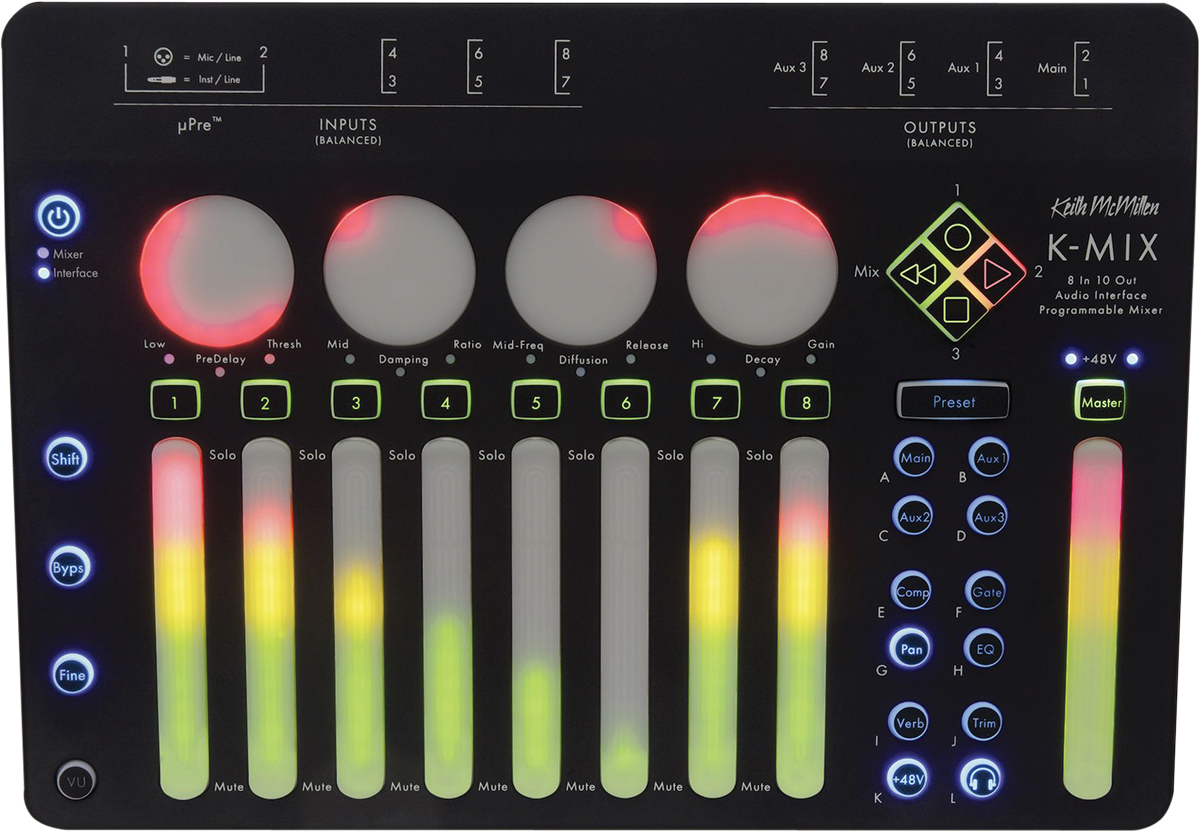 Keith McMillen Instruments has a history of thinking outside the box, and has created some really intriguing MIDI controller products – check out the SoftStep MIDI pedalboard and QuNeo control ‘tablet’. Sometimes this radical approach hasn’t been entirely successful, in my opinion, and I’d question some of their interface-design decisions, but the company always get top marks for pushing the boundaries.

Until now, it’s been all about controllers for KMI, but that’s changed with the release of the K-Mix. True to form, some reinventing of the wheel has occurred; this is no ordinary computer audio interface – it’s also a standalone mixer (with surround if you want it), and a MIDI control surface.

The box contains the K-Mix, a USB micro cable for connection to computer or tablet, a USB mini cable for connection to a mains power supply or KMI’s Expander MIDI interface, and a USB-type power supply. The K-Mix is bus-powered when connected to a computer, but a mains plug is required when standalone or connected to an iPad. Out of the box, the K-Mix impresses with a distinctive, kind-of cool design, measuring 235×167.5 x 40mm, and weighing 7.09kg.

There are an awful lot of connections for such a petite box – eight balanced inputs, two of them being XLR/jack combos with Hi-Z instrument input and mic preamps (the preamps are KMI’s proprietary µPre models), eight balanced 1/4” outputs, and a 3.5mm stereo headphone output, which can also function as another stereo output. The channels can be linked into pairs, and up to three stereo aux busses are available – send any track you like to these. If you want MIDI in/out with hardware, you’ll have to use the optional Expander. 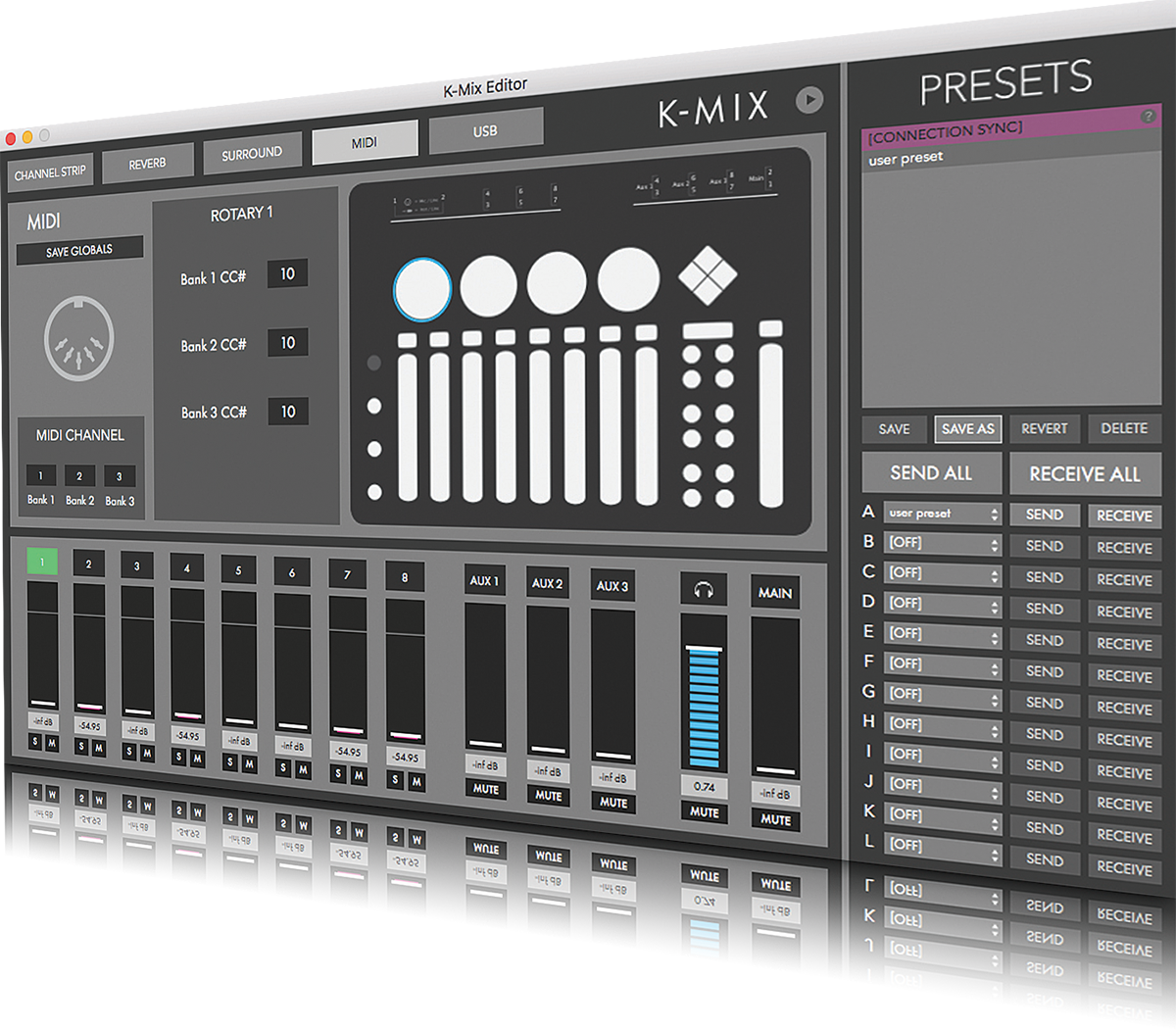 The K-Mix has no moving parts, which is not so surprising if you’ve seen or used other KMI gear. Instead, it uses what KMI calls ‘smart sensor fabric’ material under the controls, providing four rotary controls, eight 75mm channel faders, a master fader, and 31 buttons, all of these controls being backlit when appropriate.

This approach makes the K-Mix more streamlined and theoretically less ‘breakable’ than something with a bunch of protruding plastic knobs and faders. 12v and 48v phantom power are available, sample rates of 44.1, 48, 88.2, and 96 kHz are supported. The standalone value is enhanced by the ability to store up to 12 presets internally, and onboard digital effects. Yeah, it’s a lot of stuff in a box – you’re probably getting a clue already about whether this is going to be overkill, or an incredibly convenient centrepiece to your rig.

After installing the K-Mix Editor software on a Mac, and installing the latest firmware update, I disconnected the K-Mix from the computer, and ran it standalone, connecting the mains power as mentioned previously. I hooked up a few hardware noise-makers – Teenage Engineering PO-16, Novation Circuit and Bass Station, Elektron Monomachine, and still had two inputs left, meaning I could connect yet more hardware or a couple of microphones. This is a real luxury after all the times I’ve spent calculating input-saving strategies with certain other small interfaces.

The faders have a horizontal ridge going across them at the point equating to 0dB if you’re using them as volume faders. If they’re not detailed enough, press the Fine button to temporarily gain higher-resolution control, ‘zooming’ to focus around the range currently selected. The Master volume fader at the right shows separate left/right activity, using two columns of LEDs, while pressing the Trim button changes the fader function to input gain control, and pressing VU uses the LEDs behind each fader to display real-time volume levels.

I was monitoring on in-ears connected to the front-fitted headphone minijack – pressing the headphone button changes the master fader over to headphone volume control (pressing Main always takes you back to the default mixer controls). 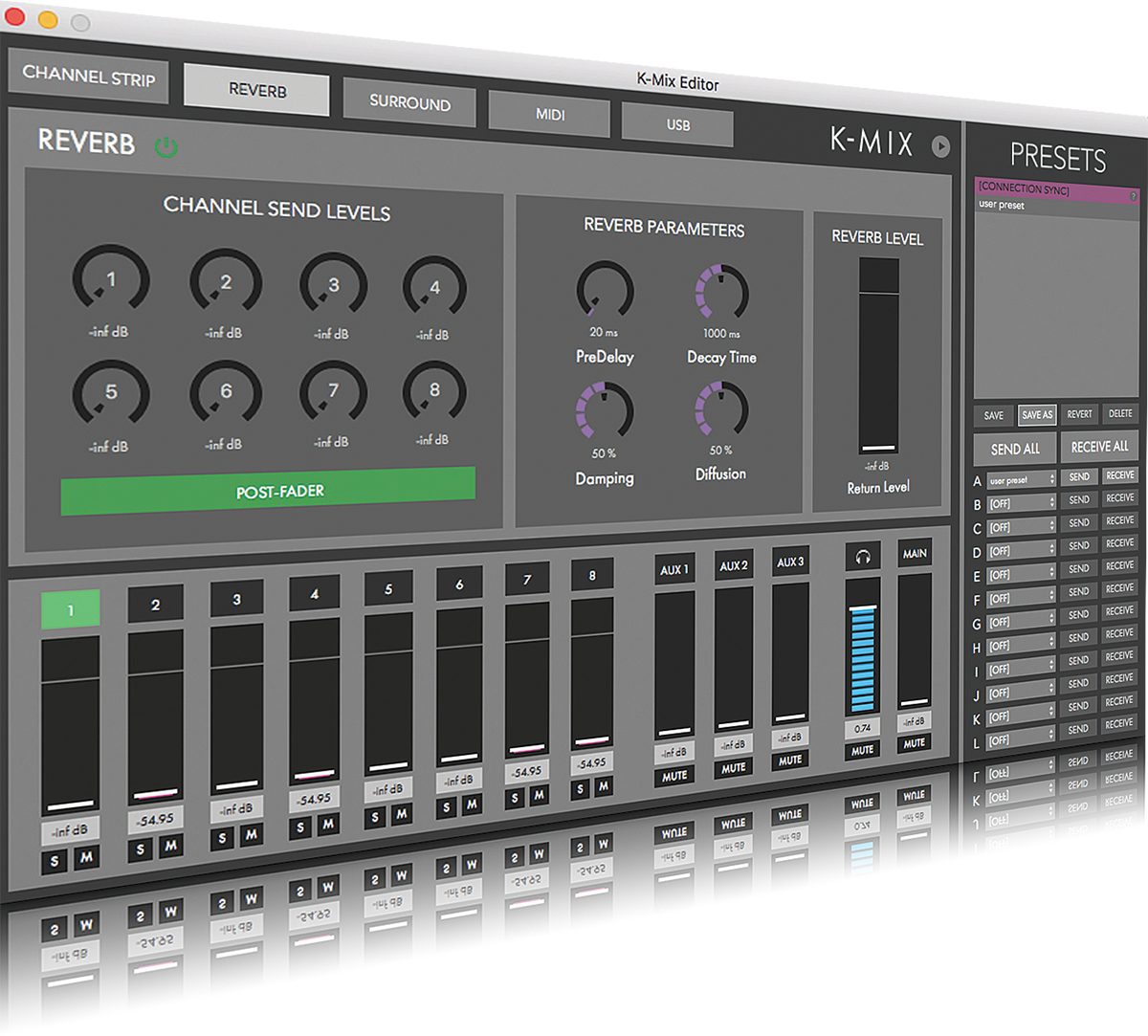 The controls aren’t clinically precise, but they’re certainly good enough for the kind of applications you’d most likely use the K-Mix for. I had no problems getting clean loud signals into and out from the K-Mix, whether using synths or microphones, there’s plenty of headroom. Subjectively, the K-Mix sounds flat and unhyped, and it’s clean and totally usable in the studio, as well as for the more obvious tabletop gig or jam activity.

After some initial fumbling around, or even, god forbid, reading the manual, the layout’s quite logical and reasonably intuitive. Having said that, the initial ‘getting to know you’ phase of this review wasn’t helped by the K-Mix’s tiny blue-backlit buttons. I found the text on these buttons virtually impossible to read, no matter what the lighting conditions. I’m short sighted, and I couldn’t truthfully recommend the K-Mix for anybody who has vision problems without them checking those buttons first.

The K-Mix includes onboard DSP effects which are available in either standalone or computer modes – each channel has a three-band EQ, compressor/limiter, and gate, and there’s also a master reverb with sends per channel.

The reverb isn’t too impressive, but the other effects are certainly good enough for live use and basic recording tasks, although you’ll probably get more control and ultimately better sounds from plug-ins within your DAW if you’re connected to a computer. Effects can be toggled on/off from their respective buttons, and their parameters adjusted via rotary controls. 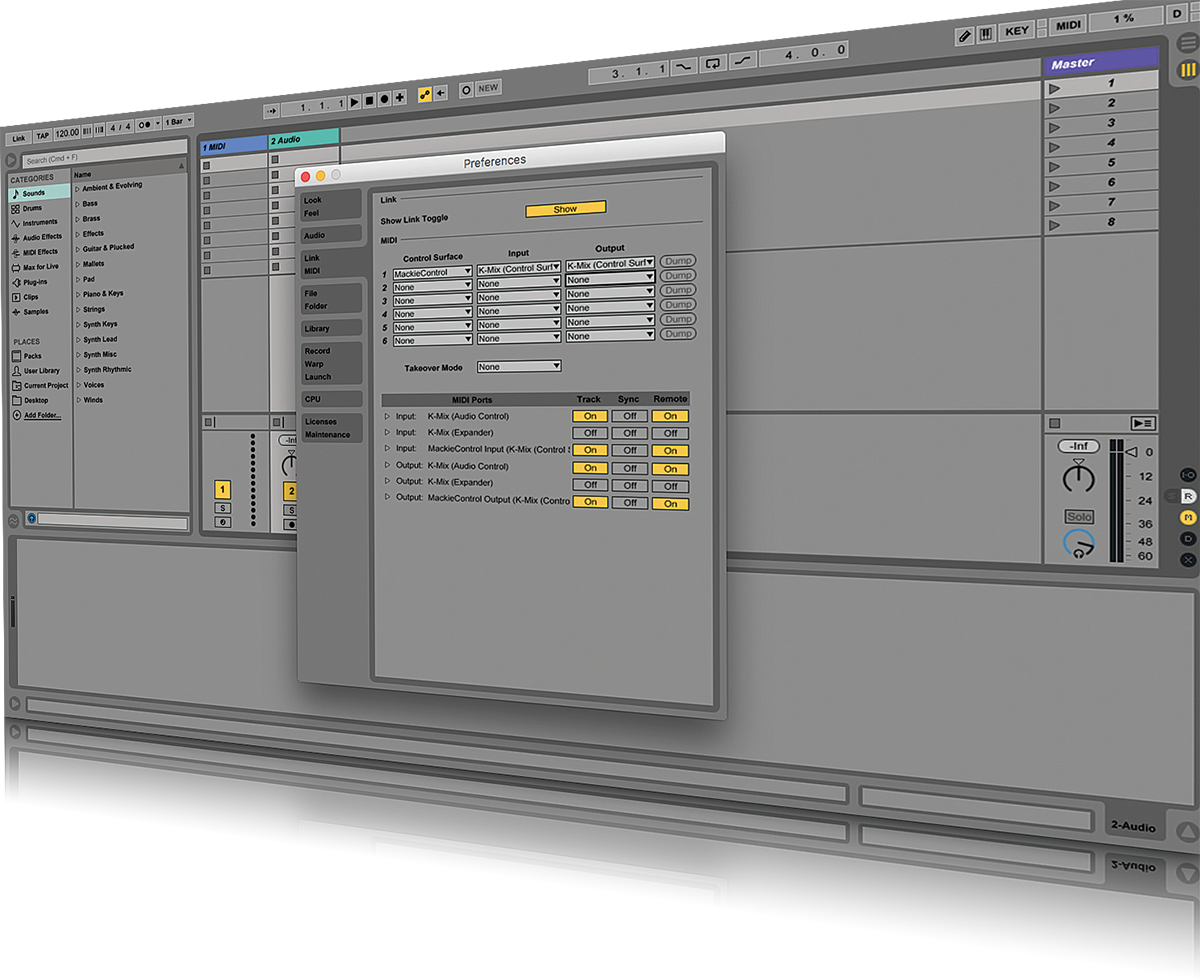 I was having way too much fun jamming with the K-Mix and the synths, so it was time to go back to the computer and fire up Ableton Live. Of course, you have the monitoring options you’d expect, including listening to the K-Mix’s audio inputs without or without going through the computer first, and with or without the effects.

But don’t forget, the K-Mix works as a MIDI source and destination, too, so make sure you set that up, too – inside Live’s MIDI Preferences the K-Mix shows as ‘K-Mix (Audio Control)’ as an input and output; it also shows as ‘K-Mix (Expander)’ for in and out. You’ll also see it as ‘MackieControl Input (K-Mix Control)’ and output of the same – enable this, because then you can use the K-Mix’s diamond pad buttons as transport controls. 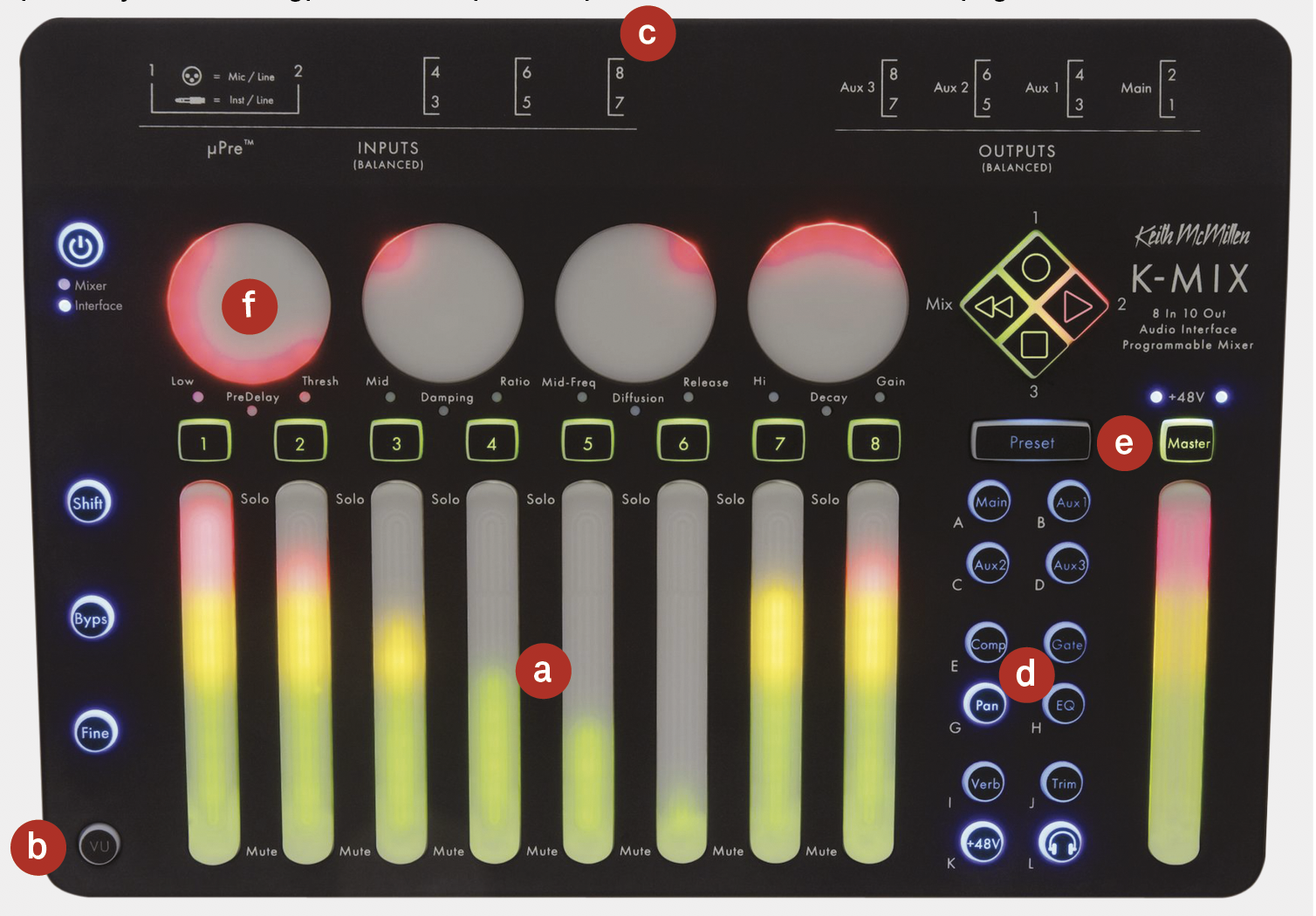 b: VU button – Press the VU button to see real-time level updates from each track, whether you’re handling the inputs or outputs.

c: Ins and outs – The K-Mix has eight analogue inputs and 10 outputs – impressive for a compact device, and great for tabletop rigs.

d: Onboard effects – Use these buttons to toggle the K-Mix’s onboard effects, or to select them for editing via the rotary controls.

e: Standalone storage – When you’re using the K-Mix in standalone mode (sans computer), you can save and access up to 12 onboard presets.

f: MIDI control surface – The faders, rotaries, and most buttons can send MIDI messages, so the K-Mix functions as a MIDI controller, too.

The K-Mix is so unusual, no single device directly competes with it. But these items could probably also be on your gear-shopping radar – your ‘geardar’:

iConnectivity iConnectAUDIO4+
www.iconnectivity.com – $299.99
This is probably the closest thing to the K-Mix in terms of design philosophy – recognising that our rigs are not like they used to be. The iConnectAUDIO4+ allows you to mix-and- match Mac, Windows, and iOS devices, and provides incredibly powerful MIDI and audio routing options.

The K-Mix works with iPads, although to provide adequate power it needs the supplied mains adaptor connected to the Control USB port, and the iPad connected to the Audio USB port. The MIDI communication is still there with iOS, so you can use the K-Mix to send notes and CCs to your chosen apps.

Configure it with the Editor software (while connected to a computer) if the app needs specific messages, or map everything directly on the iPad if the app supports MIDI Learn. iPad Pro, K-Mix, a few cables – that’s a compact rig amongst compact rigs!

There are three MIDI layers available on the K-Mix: entirely separate sets of MIDI channel, note, and CC assignments for every fader, rotary, and (nearly all of the) buttons. For some gigs, this might mean you can leave your MIDI controller at home, or at least bring the K-Mix into play as a secondary control device. There are enough buttons there to enable creative setups, navigating scenes or even triggering clips and notes inside Live, using the rotaries to control macros, plug-ins, and so on.

The MIDI fun doesn’t end there – the K-Mix can also be controlled via MIDI; everything from fader values to effect parameters, to preset selection, can be controlled in real-time or automated. There’s a huge amount of communication available here.

The K-Mix Editor, which I’ve already mentioned, is a Mac- and Windows-compatible application that includes tabbed control panels for Channel Strip, Reverb, Surround, MIDI, and USB. In general, it’s more convenient to use this software rather than the hardware itself, although most (not all) tasks can be accomplished from there. 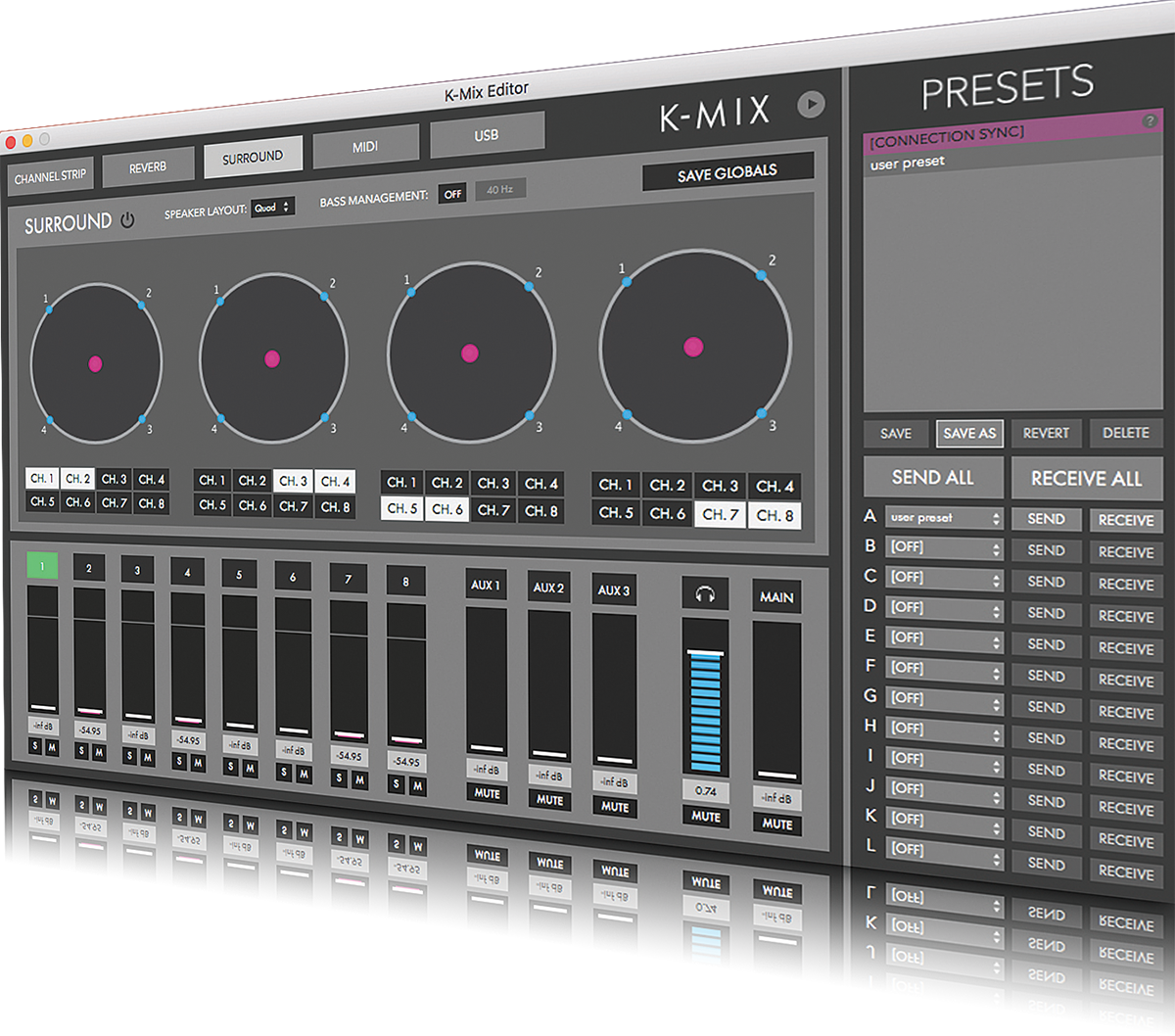 The surround setups are organised using the Editor

There are some Editor-only parameters, including the MIDI CC/note assignments I’ve mentioned, and matters relating to Surround setups (Quad 5.1, 7.1 and Octo), a rumble (high pass) filter, and headphones output gain. The headphones can be set to monitor any source, but also to act as a low-frequency crossover for surround mixing duties.

Also, very usefully, you can manage an unlimited number of presets on your computer, as opposed to the 12 available on the K-Mix.

There aren’t many products that directly compare with the K-Mix – it’s pretty unique. Sure, everything it does can be done with other devices, but nothing else does it all in one handy and well-built package. As a standalone mixer, the K-Mix is great for tabletop jamming rigs; it has the small footprint, the presets, the effects, and – most importantly – a healthy number of inputs and outputs.

You’ll also love the MIDI control functions. Nobody’s going to buy the K-Mix purely as a controller, but that’s a damn useful set of extras to have on top. The fact that it provides full functionality, including phantom power, off a single USB cable is very impressive. During my test time, it worked perfectly and I’d happily take it on stage.

The K-Mix is one of the most useful devices of its type around, akin to the excellent iConnectivity products, in terms of targeting the needs of real-world modern electronic musicians and producers. My only criticisms are the issues with button legibility – although, if you have better eyesight than mine, it may not be a problem – and not feeling that really precise control is available from the faders and rotaries.

I love the game, the challenge, of building mobile music rigs, and as an Ableton Certified Trainer, I have clients who insist on travelling with the smallest possible setups; the K-Mix plus a 13-inch MacBook Pro would make a killer portable system; just add your favourite note-input device and you’re ready. The K-Mix is absolutely worth the money, and of course, the street price is way lower than the official price stated here. Mobile or small-studio producers who are tight for space and need a lot of features, with great audio, should check it out. 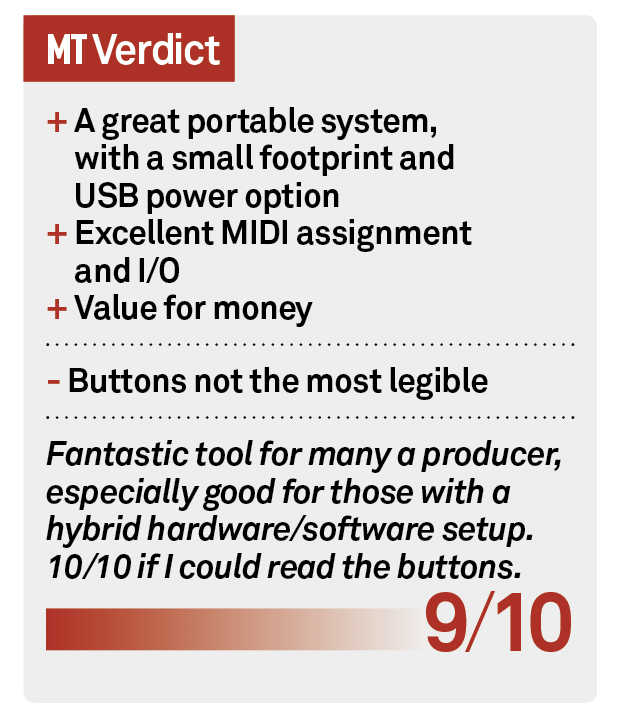