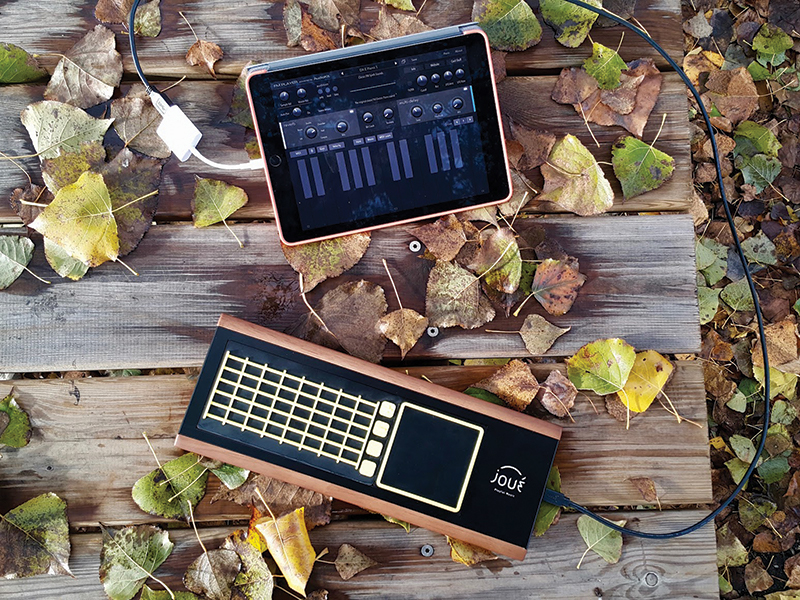 Is it a guitar fretboard? Or perhaps a set of drum pads? Well it’s both and far more. Dave Gale takes the Joué for a test drive and finds control by design 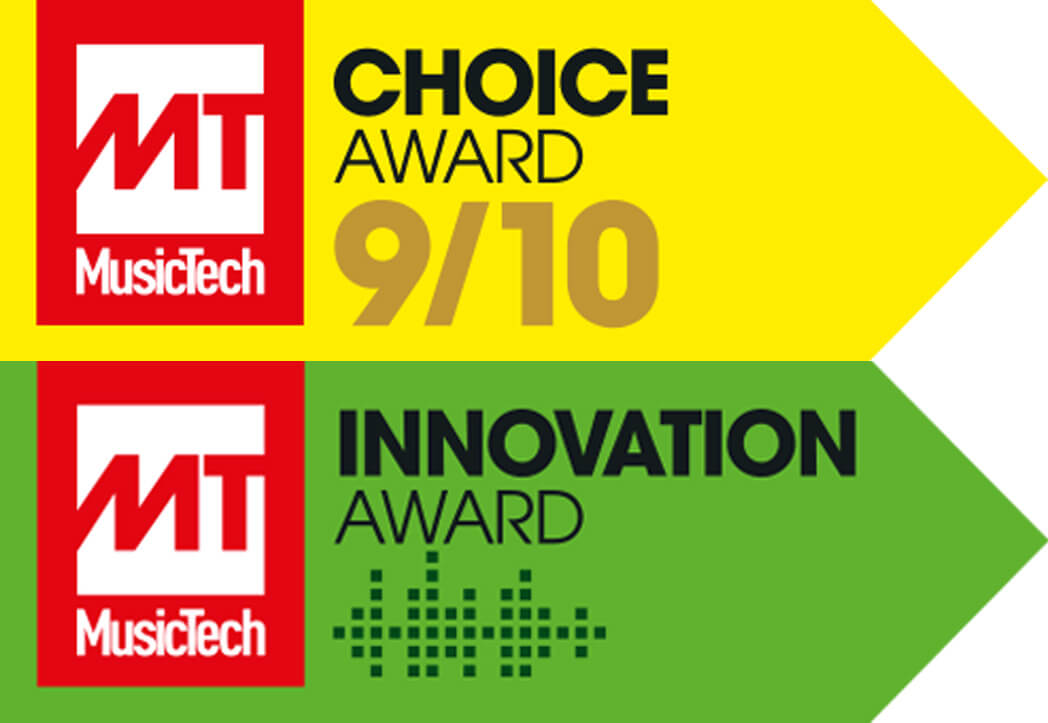 The Joué is an exciting new MIDI controller from a French company of the same name, with a design ethic that will have you salivating from the moment you open the box. The main board is made from beautifully-shaped wood, with an inset metal surface which runs the length of the unit. This board offers three seamless slots which all have RFID sensors built in. It is powered via a single USB C connector, which in my case was via a conventional USB Hub, connected to my main computer. Alternatively, with the addition of a camera kit from Apple, Joué can be connected to, and powered by, an iPad. The additional rubberised Magic Modules take a number of forms and sizes, designed to be placed in the slots, while RFID technology detects which module is in play.

Our review Joué was equipped with a full set of eight modules, but you can pick and choose which ones you might like at the point of purchase, with a helpful Essential pack offering the variety you are likely to crave. The modules will occupy one, two or all three of the available slots, but can be used in combinations.

The Synth Keyboard and Guitar Fretboard are both two-slot modules, while the Pads and Strips module only require a single slot, and nestle beautifully next to the aforementioned two-slot modules. The only module to occupy all three slots is the Scaler, which is best described as a diatonic keyboard, with options to program to a scale of your choice. It’s also equipped with additional controllers, such as octave up and down, and
a gloriously long ribbon controller-style strip.

It’s important to clarify that this is a MIDI controller, and you will need some software to use with it. Demo songs are available for Live and Bitwig users, which sowed a slight seed that the Joué may be more successful with certain applications, over others.

My own starting point was Logic Pro X, as I wanted to get a glimpse of which controllers were being outputted, so the next port of call was to download the accompanying free software, which provides set up options for the Joué.

With the piano-style Synth module, the Joué immediately had notes triggering from within Logic, and I quickly noticed that there was velocity control. Despite the fact that the Synth module is a little bit mini-key styled, I found it pretty playable. I had a particular interest in examining how well the Joué might work with orchestral samples so, reaching for the Strips module, I moved the things around to fit my playing style, with faders to the left.

I have to mention how incredible this technology is; with the editor software open, each insertion of a new module pops up really quickly, inviting you to change any desired setting very easily.

It’s a process that is intuitive, but does take a little getting used to, as you have to unlock the preinstalled patch and tweak your settings to obtain your desired operation. What is very clever is that the settings seem to be recalled as each module is removed and re-inserted, meaning that you won’t lose anything you set up. Information such as MIDI channel number is also stored and recalled, making it great for live use.

With the Strips module in place, I made some alterations to the module settings to allow for control of dynamics, vibrato and expression within Kontakt. Easy enough, and the playing was very tactile and responsive, although I found that for more serious playing and performance, my full-size keyboard was more appropriate.

The Scaler module was next. This diatonic keyboard also offers lateral control, meaning that with a left/right wobble of my finger, vibrato appeared, along with further degrees of expression. Here, additional MIDI control can be induced with any movement up and down the note key which works well on plucked instrumental sounds.

The Pads module is set up to trigger drums sounds, which it did from the moment it was put in place. Further modules, such as Bubbles, Rounds and Area, allow for control of MIDI CCs – perfect for everything from panning commands to control of a synth filter. 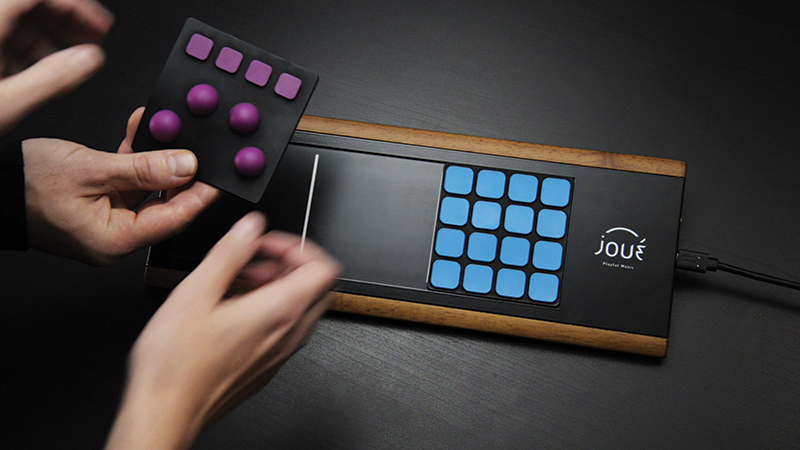 I think it’s undeniable that everyone will be drawn in by the Joué technology. It is a stunningly cool device and one that I would happily have sat on my desk, but it is also one that could replace a couple of other MIDI controllers I use. It does have limitations as a playable keyboard, but that’s hardly a surprise given the footprint and form.

This makes it more of a secondary studio device, or a mobile control surface, though. The fact that it is expandable and highly configurable makes it very desirable, and the configuration is easy, once you get your head around the accompanying software.

Further integration with mainstream DAWs would make the Joué even more enticing, but it is working within the confines of MIDI, and I think it’s easy to forget this when you see how cool the technology is. The Joué is a bit expensive for a MIDI controller, but is a desirable piece of design and technology. It is flexible, useable and could be indispensable if you’re on the move.

The Joué is without doubt one of the most innovative products that we have seen over the last year or so, backing up the beautifully inspired design with some serious technology to make it a very desirable piece of tech. Whether it is for you rather depends on your MIDI controller needs. Could it replace a full-sized MIDI keyboard?

Probably not, but being highly adaptable, it’s pretty likely that the ability to morph its modus operandi on the fly will find other uses. The portability also means that it’s likely to be a great fit for anyone working on the move, who yearns for a keyboard, pads and other controllers in a single device, not to mention the immense cool factor!