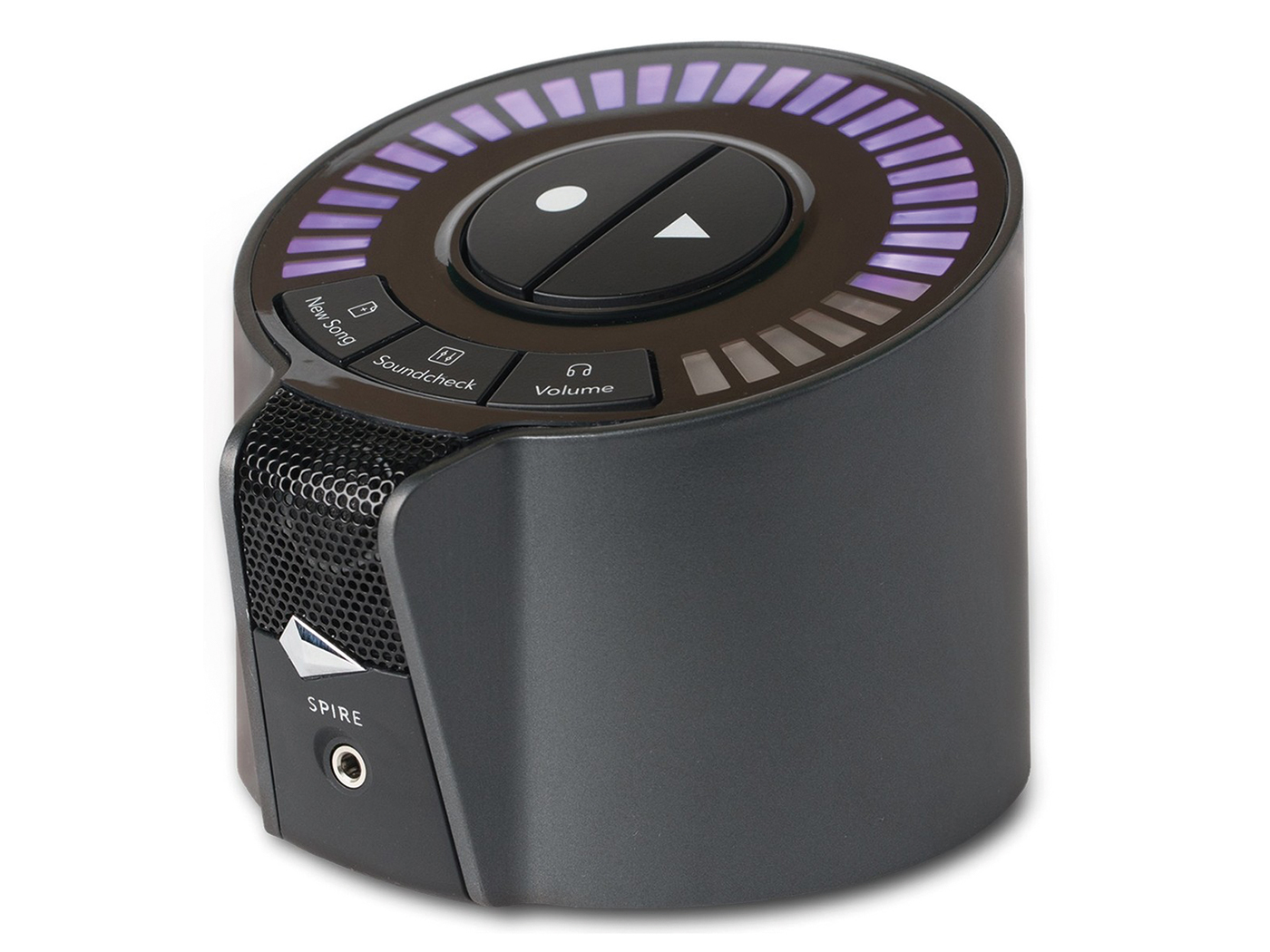 Spire Studio is a standalone or iOS multitrack recorder that aims to bring back the golden days of mobile multitrack recording. Remember those happy days of bouncing tracks down when you were limited to just four tracks? A time when limitations actually aided your creativity?

OK, maybe you’re not as old as me, and while iZotope’s Spire Studio has the same ’instant recording’ ethos as those early cassette multitrackers, there’s a lot more to get your teeth into to create very high quality recordings, should you wish. Add a free app on and you really have got a recording studio in the palm of your hand.

Eight in a tube

What you get with Spire Studio is a chunky cylinder-shaped box that I wouldn’t describe as particularly mobile in shape – it’s hardly pocket-sized – but it does feel rugged enough to be taken out and about. It contains a 360º omni-direction microphone and two mic/line, combi XLR/jack inputs for plugging in, well, pretty much anything you like.

Connecting an external instrument or mic into socket one disengages the front microphone for a cleaner recording, while if you use input two, you can record whatever you plug in there – an acoustic guitar, for example – and the on-board mic at the same time.

Around the top edge is a series of LEDs that indicate several things including the number of tracks you have recorded (shown in different coloured segments), your input signal level and your output volume level. Completing the connections you get a couple of useful headphone outs. 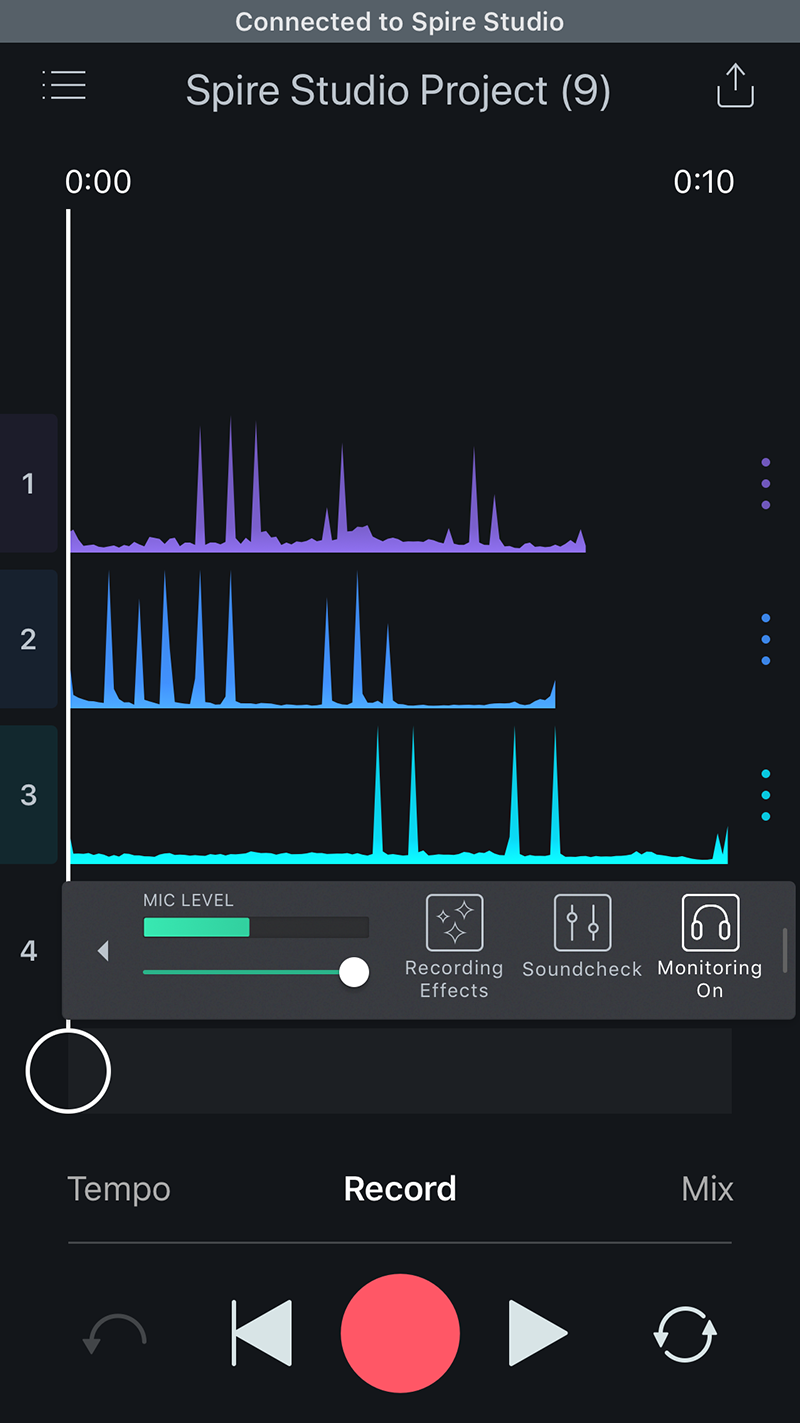 On the top of the unit are Record and Play buttons, a New Song button, Soundcheck and Volume. Soundcheck, combined with the LEDS, is a particularly useful function as pressing it gives you around eight seconds to play in your maximum vocal, guitar or whatever signal level, and then Spire Studio sets its input recording level up accordingly, to be able to handle whatever you throw at it.

As a standalone recorder, things couldn’t really be that simpler with Spire Studio. Simply press New Song, record and sing or play away into the microphone. The quality is surprisingly good just using the on-board mic, although you can plug a higher quality one in should you wish. You set the level with the aforementioned Soundcheck, hit record, play your tune, then hit record again, and your first track is stored, and then shown ’moving’ around to the right on the LED indicators. 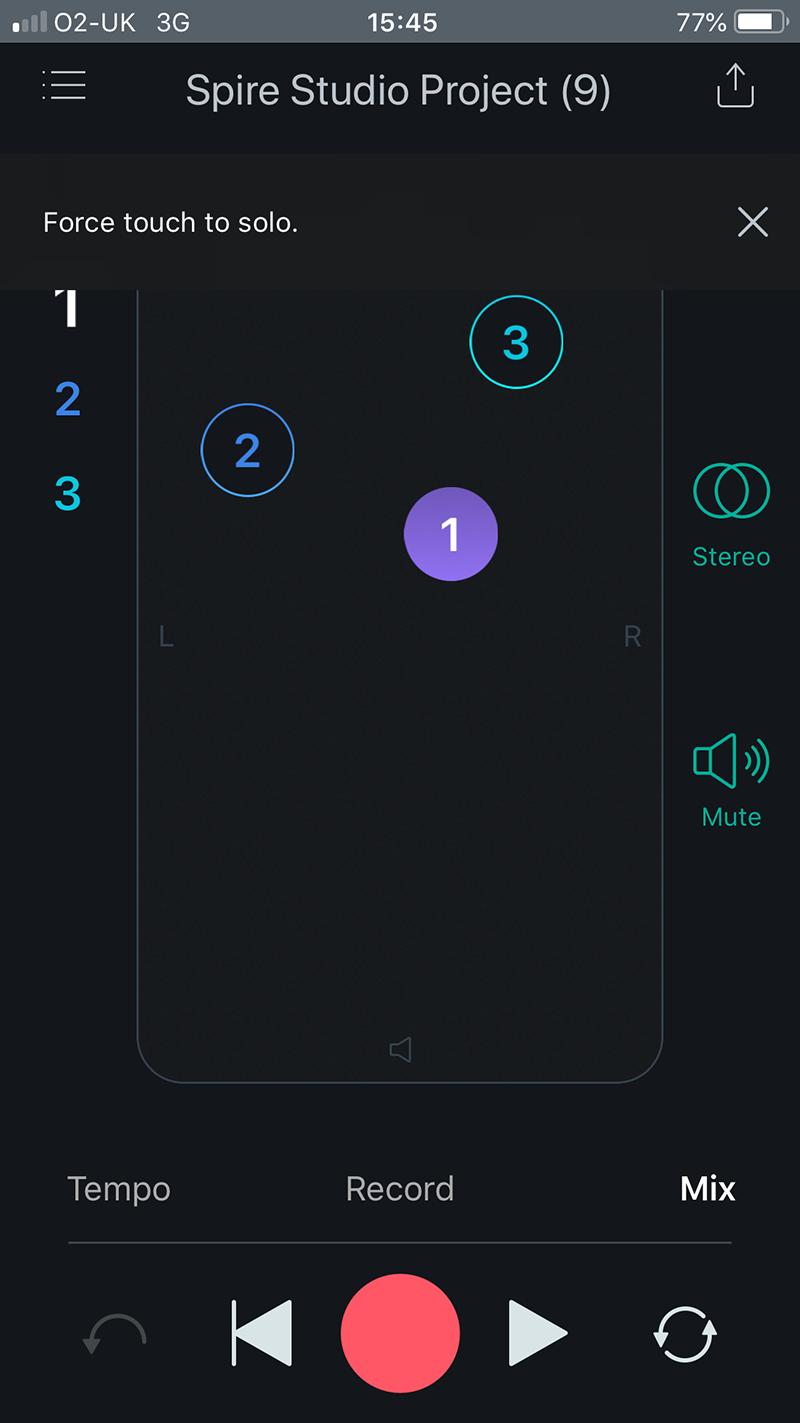 As you record track by track, these build up in different colours to the maximum of eight. It’s not immediately obvious how to then recall different songs that you have recorded – there are very few other on-board controls and the instruction manual (such as it is) make no mention of it – so for this you are really steered towards using the app. But this is really where Spire comes alive, so it’d be churlish not to use it.

It’s a free iOS app (on the iZotope website, it states Android too, but then retracts that, so we tested Spire Studio with the iOS app!). Under Record mode, the app displays all the audio you have recorded as waveforms running left to right, and, just like the audio tracks in your DAW. OK, it’s not as detailed as the audio in your DAW but you are able to clean up your recordings by deleting certain parts either left or right of the current play position.

Where the app works really well is for simple mixing and panning under the Mix window, where you have all eight of your parts displayed on screen to drag left and right (pan) and up and down (volume) very easily. You can also easily mute tracks. 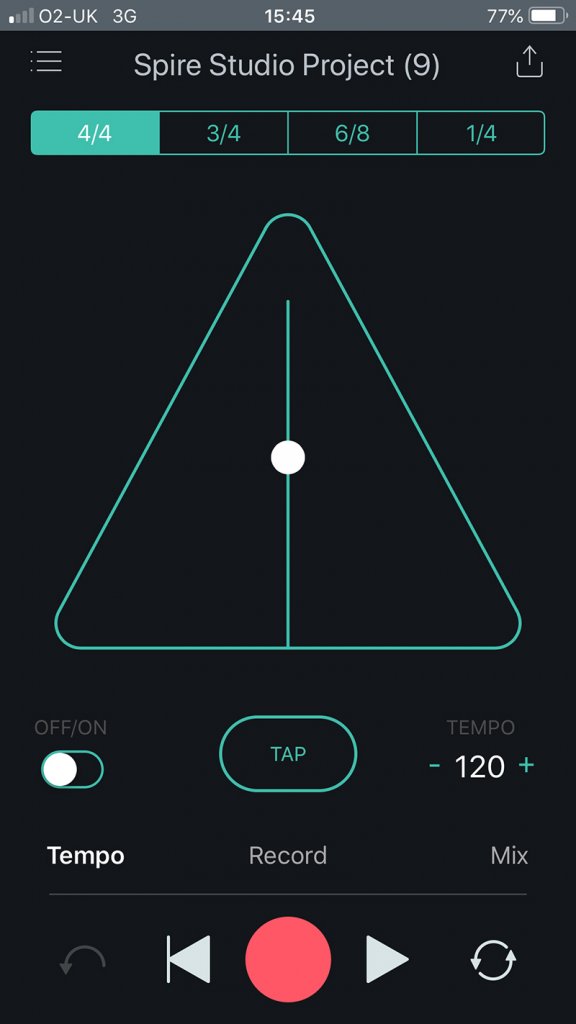 There are some great on-board effects that can be used when recording (not on older recordings you have made, though) which are very good for livening up acoustic guitars and vocals, in particular. Finally, in Tempo mode, metronome and manual tempo adjustment features give you a good audible guide when making these recordings. In general, the app makes Spire Studio very easy to use, and you could also use it minus the hardware to make simple recordings, although you’d be at the mercy of your phone mic.

Spire Studio is a great, rugged device that allows you to make fast and good quality multitrack recordings as a standalone unit. Teaming it up with the app and you have a fantastic partnership that allows you to get your musical ideas down quickly, and export all the stems you record to wherever you want.

As such, if you are a studio-based producer who finds yourself on the road and in need of something for when those moments of inspiration strike, then Spire is a great option, especially if you don’t like risking taking your laptop with you to make such recordings.

I’d also say it’s a good choice if you are an aspiring singer-songwriter. It is perhaps a little pricey for what it is ultimately, but it is also very easy to use and pretty mobile so really does bring back some of that multitrack mentality we had ’back in the day’. All in all, Spire is a simple portastudio for the 21st century and a pretty inspired bit of kit.

If you have a decent home studio set-up then, no, Spire is not essential. However, if you are totally new to music making and don’t fancy the complexities of DAW recording, then Spire, along with the app, makes recording a breeze.

You’ll be limited to eight tracks until you take the plunge and open the DAW route, but it’s a great scratchpad to get you started. Where Spire is really inspired is for the travelling musician with too many song ideas in their heads. It can suck up all your riffs, melodies, beats and moments of inspiration quickly and easily, so if you are one of these people who has maximum ideas when away from your studio, Spire could be the sponge you need.