The latest versions of iZotope’s flagship mixing and mastering suites add a host of new features. Alex Holmes loads a mix and put them to the test… 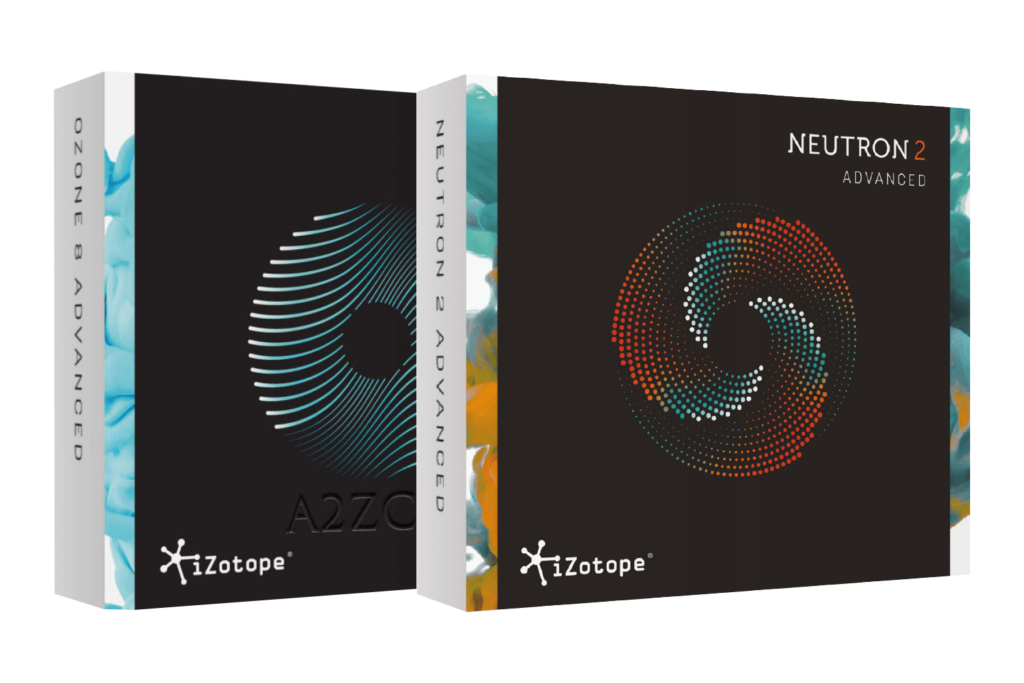 iZotope has been one of the companies at the forefront of cutting-edge user interaction and DSP over the last few years, and the potent Ozone/Neutron combo has become a flexible go-to tool for many composers, producers and engineers.

These latest versions see the two more intrinsically linked than ever, with inter-app communication, new shared plug-ins and a universal look for the GUIs. We’ve reviewed various versions of Ozone, and not all that long ago, the first version of Neutron. So, here, we’ll focus more on what’s new.

To give a super-quick overview, though, Ozone comes both as a standalone program and as a plug-in, with a host of features aimed at mastering, and 11 modules (available as separate plug-ins in the Advanced version) including an Equalizer, Dynamics, Dynamic EQ, Imager, Exciter, Vintage EQ, Vintage Tape, Vintage Compressor, Vintage Limiter, Spectral Shaper and a Maximizer.

Other key features include an MP3 Codec Preview section, Dithering, and extensive metering throughout. Neutron on the other hand, is more focused on mixing, with six modules (again, available as separates with the Advanced version), including a dynamic EQ, two Compressors, Exciter, Transient Shaper and a Gate.

There’s also a Limiter, a unique spectral-shaping section, a Masking Meter that shows overlapping frequencies between instruments, and a ground-breaking AI Track Assistant that builds intelligent preset starting points for you. A lot of the modules across both Ozone and Neutron are multiband for added flexibility, and in Ozone, function in M/S mode.

Right! Now we’re up to speed, let’s delve into the new features in Ozone 8. Arguably the most exciting new addition is the AI Mastering Assistant, which works in much the same way as the Track Assistant in Neutron. You select whether you want to aim for Streaming or CD target volumes and choose from three intensities, or build a preset based on a reference audio file, and hit go.

You then get a list running down each function as Ozone sets up a channel strip with an EQ, Dynamics module (if required), a Dynamic EQ, and finally, a Maximizer. The especially clever part here is working out the Dynamic EQ settings last, as it looks at which frequencies are most likely to cause distortion when pushed into the Maximizer and applies a subtle dynamic EQ to control them, thus giving you some extra headroom to push into the final Limiter.

Ultimately, something as vital as mastering shouldn’t be taken lightly, and trusting software to do it for you isn’t really recommended. However, we tried remastering some old tracks using carefully selected references, and the results were surprisingly subtle and effective.

At the very least, it gave us a starting point to tweak further and came up with some useful EQ suggestions we would never have tried ourselves. It would have been nice to also have the Imager module included to help match the width of your track to your chosen reference, but there is possibly a technical reason why iZotope hasn’t include this.

Another useful new addition is internal referencing, where you can load up to 10 reference tracks, volume-match each via a gain slider and set multiple loop points. In fact, some clever DSP tries to work out the song sections and loops for you when you import, although it struggled a little with more repetitive dance music.

These references can then be used with the Master Assistant, and can have their spectrums and volume meters displayed alongside those of your track. It’s an excellent and highly useful addition to have this A/B feature built-in, but it’s a shame there’s no automatic volume-matching.

Plus, you’re forced to use the loop starts rather than being able to click and jump to a specific point in a track. Also, the reference spectrums show up as two shades of grey, which makes it a little hard to distinguish them from each other.

1. References Load up to 10 tracks into Ozone 8’s Reference section to quickly A/B against your own mix. A clever algorithm attempts to work out verses and choruses and sets appropriate loop points. 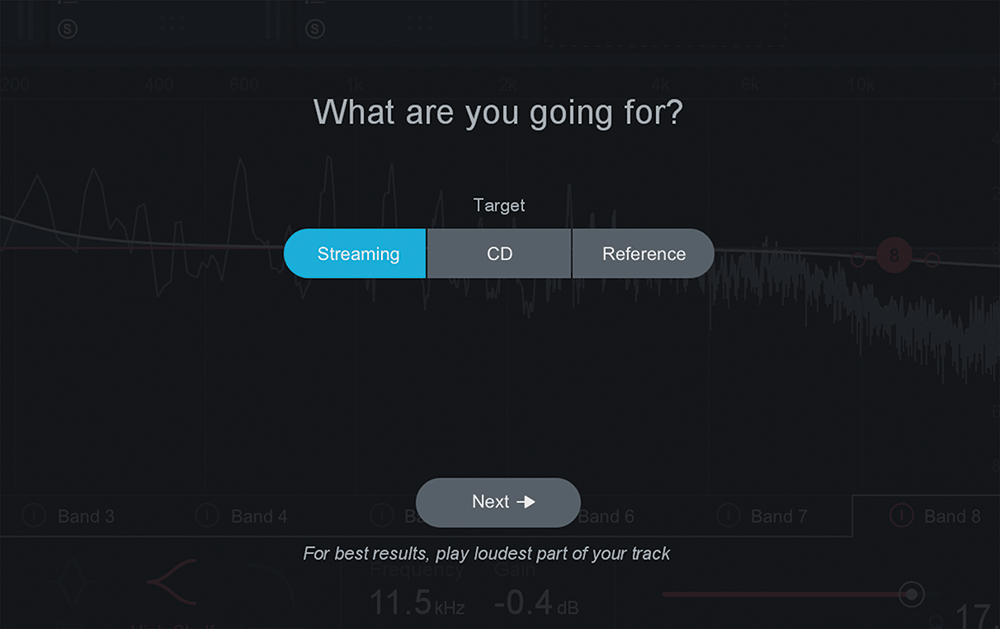 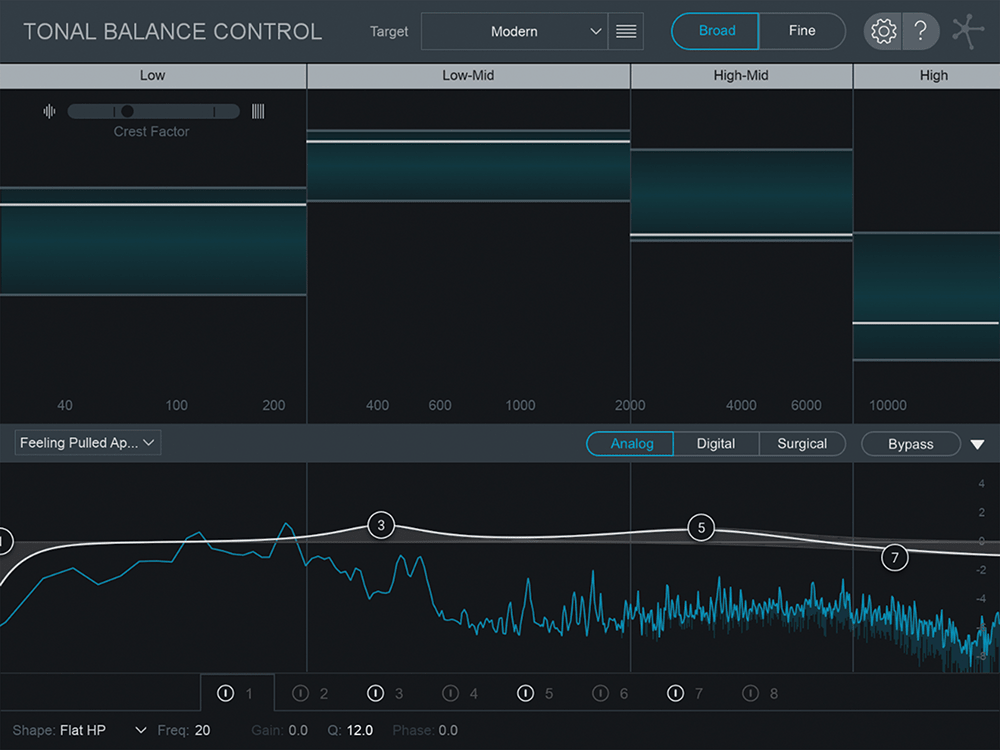 3. Tonal Balance The new Tonal Balance plug-in is a great new way to visualise how the energy in your track matches that of your reference. You can also control the Ozone and Neutron EQs from inside the plug-in.

On to the new separate Tonal Balance plug-in, which comes with the Advanced versions of both Ozone 8 and Neutron 2. You can show an overview of the spectral balance of your mix against three averaged presets (Modern, Bass Heavy, or Orchestral), or you can create your own preset based on a reference track or folder of tracks. The Broad view gives you four fixed bands, with white lines that show where the energy in your mix lies in relation to the reference, and the Fine view gives a more detailed spectrum curve.

In addition, a Crest Factor meter shows whether your track has more, or less dynamic range in the low-end than your reference, and alt-clicking anywhere on the spectrum allows you to solo and listen to a narrow frequency band.

The clever part comes at the bottom, where some inter plug-in communication lets you select and edit EQ nodes from any Ozone or Neutron EQ modules across your mix. This means that if, for example, you can see that there’s too much top end, you could immediately load up the EQ on a cymbal track and make some adjustments.

This is an incredible workflow in principle, but we worry that it’s using the eyes to mix a little too much, without also taking into account potential issues, such as: will adding more low end to my bass affect how it hits a distortion plug-in elsewhere in the chain?

This isn’t such an issue when using the linked Ozone EQ, though. It also seems like a bit of a missed opportunity not to offer up band soloing in Broad mode, to help focus the ears on particular parts of the spectrum.

So those are the three main new features in Ozone 8, but what else is new? There’s a brand-new Spectral Shaper module that can be used to target and control different areas of the spectrum, and is especially good at transparently taming harsh high-end frequencies and transients.

The Maximizer now features a low-latency IRC mode, Transient and Sustain stereo-independence sliders, and a new learn function that lets you select a target LUFS value then sets the threshold accordingly.

Other features include an improved-sounding Vintage Compressor, a 7.5 IPS mode for the Vintage Tape to offer a warmer bump, and the option to select different modes for each band in the Exciter. The GUI also now matches that of Neutron 2, with a clean, if a little overly grey look.

For the most part, it’s clear and easy to read, but for some reason someone decided to use some incredibly small fonts. This may not be an issue for some, but the GUI isn’t resizeable, so if you’re using a giant hi-res screen, you may struggle a little.

If you have Ozone 7 and Neutron 1, these upgrades aren’t essential for improving your tracks, given the price. In particular, the usefulness of the new referencing and Tonal Balance features will depend on whether you have other software for this.

However, if you’re in the market for an advanced set of tools to develop your mixing and mastering, this covers a lot of bases.

On then to Neutron 2, and like Ozone, there are many small refinements that improve the flexibility and usefulness of the plug-in. There’s a new I/O section that allows you to switch to mono, swap the left and right, invert the phase, and control panning and stereo width.

Although the Compressor, Exciter and Transient Shaper modules remain the same, there is the welcome addition of a multiband Gate module with hysteresis, which helps add an extra layer of flexibility to the overall suite.

The Track Assistant also sees an improved workflow that lets you select an instrument type (including the new piano option) before creating a preset starting point based on nine different Style and Intensity combinations, and it now sets the attack, release and ratio parts of the compressors. We did a few tests comparing it to Neutron 1 and, to our ears, the results offered a very subtly smoother and more transparent compression sound.

On top of these refinements, you also get the Tonal Balance plug-in (which we’ve already covered), plus Mix Tap and Visual Mixer plug-ins. The Mix Tap is a CPU-light, but highly functional utility with many of the features found in Neutron’s I/O section, plus time delay and a low-cut filter.

As with instances of Neutron, you can name each Mix Tap, and via inter-app communication, it will appear from a drop-down menu in the Tonal Balance and Visual Mixer plug-ins. The latter offers up a unique way for you to view and adjust your mix, with an X-Y pad allowing you to set the volume, panning and stereo width of each track, and the ability to save up to three snapshots. 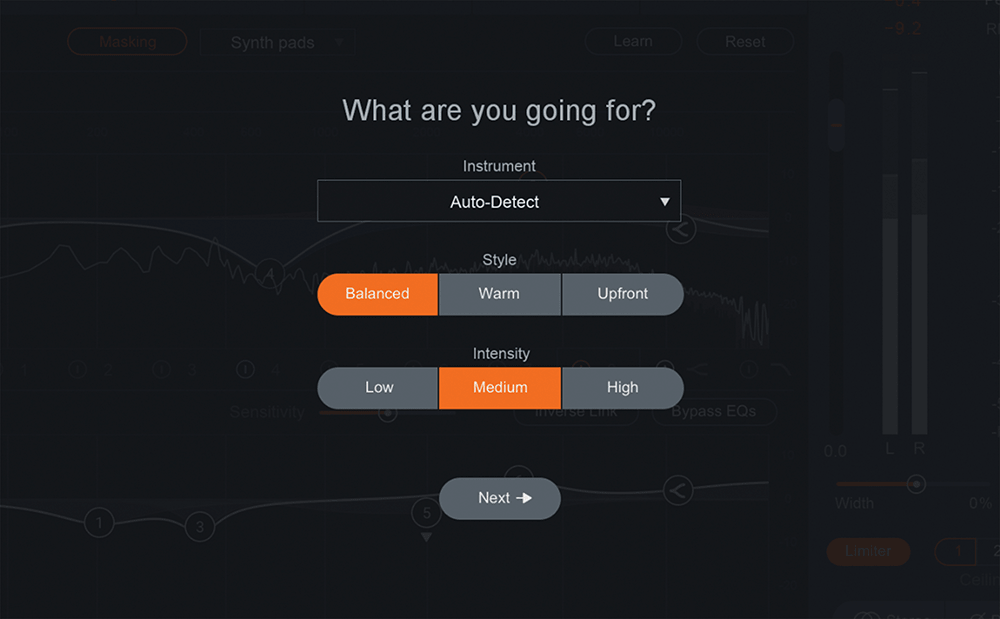 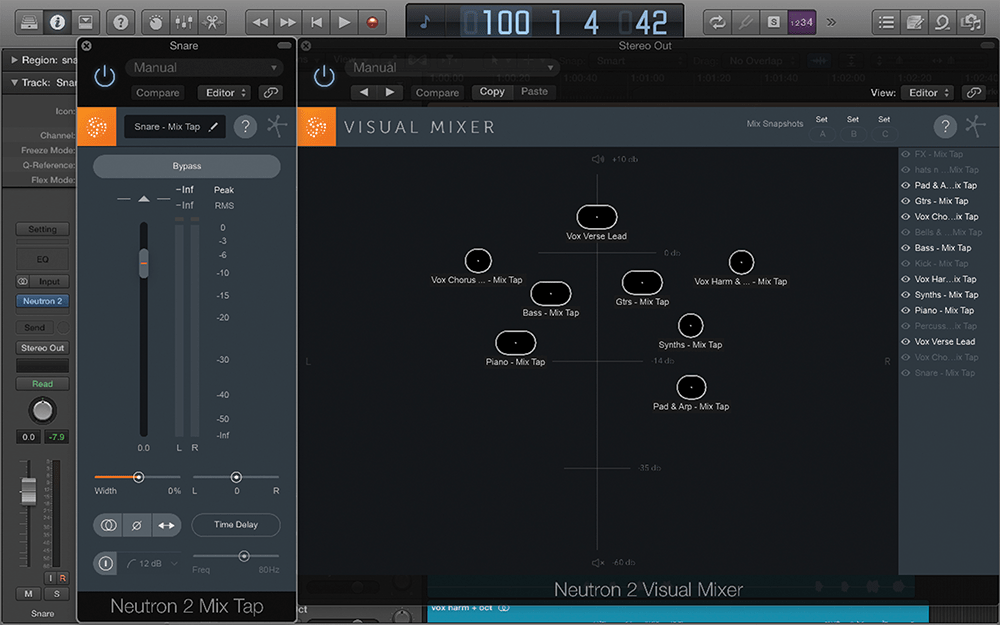 2. Visual Mixer The new Visual Mixer and Mix Tap plug-ins allow a unique visual overview of your mix, so you can quickly control the levels and pan of each element from a single window. 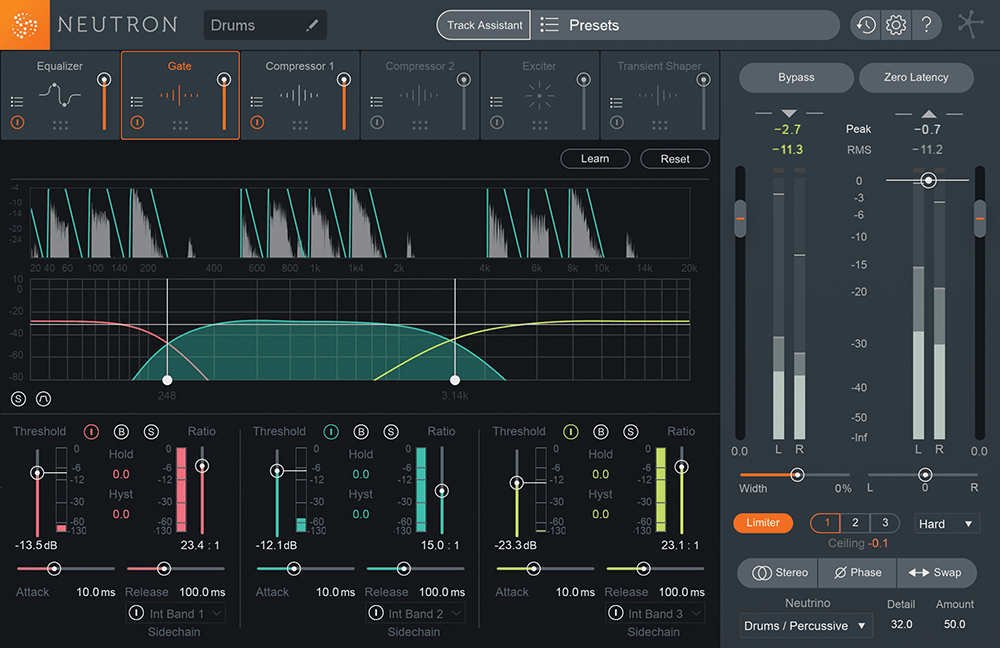 3. Gate The multi-band Gate makes a welcome return with a new module in Neutron 2. Useful features include Hysteresis, per-band side-chain input and a Crossover Learn function.

You’ll have to do some legwork adding and naming plug-ins to get the most out of this tool, but once set up, it’s a neat way to visualise and edit your mix layout. It’s a shame, then, that it lacks simple but essential functions like solo and mute, and it would also have been useful to have some sort of metering feedback in the background indicating the density of the sound stage. Overall, though, we’re excited to see how iZotope develops this new part of the suite.

With both regular and Advanced versions for Ozone and Neutron, iZotope has a large number of upgrade options and prices, plus the great value Music Production Suite that also includes Nectar 2, Trash 2, VocalSynth and RX 6. There are too many options to list here, so you’re best off checking the website to clarify what’s included in the Standard and Advanced versions and decide if it’s worth it for you.

Ozone has always been a superb piece of software, and the many new additions help to build and refine on what has come before. Likewise, we were extremely impressed with the first version of Neutron, and Neutron 2 only improves on the original.

That said, although we have no hesitation in recommending both to newcomers, those using older versions may want consider whether they need some of the newer tools on offer. If you’re willing to spend time setting up a template, utilising these plug-ins across the board, and making the most of the inter-app communication, the new additions will be worth the upgrade price. 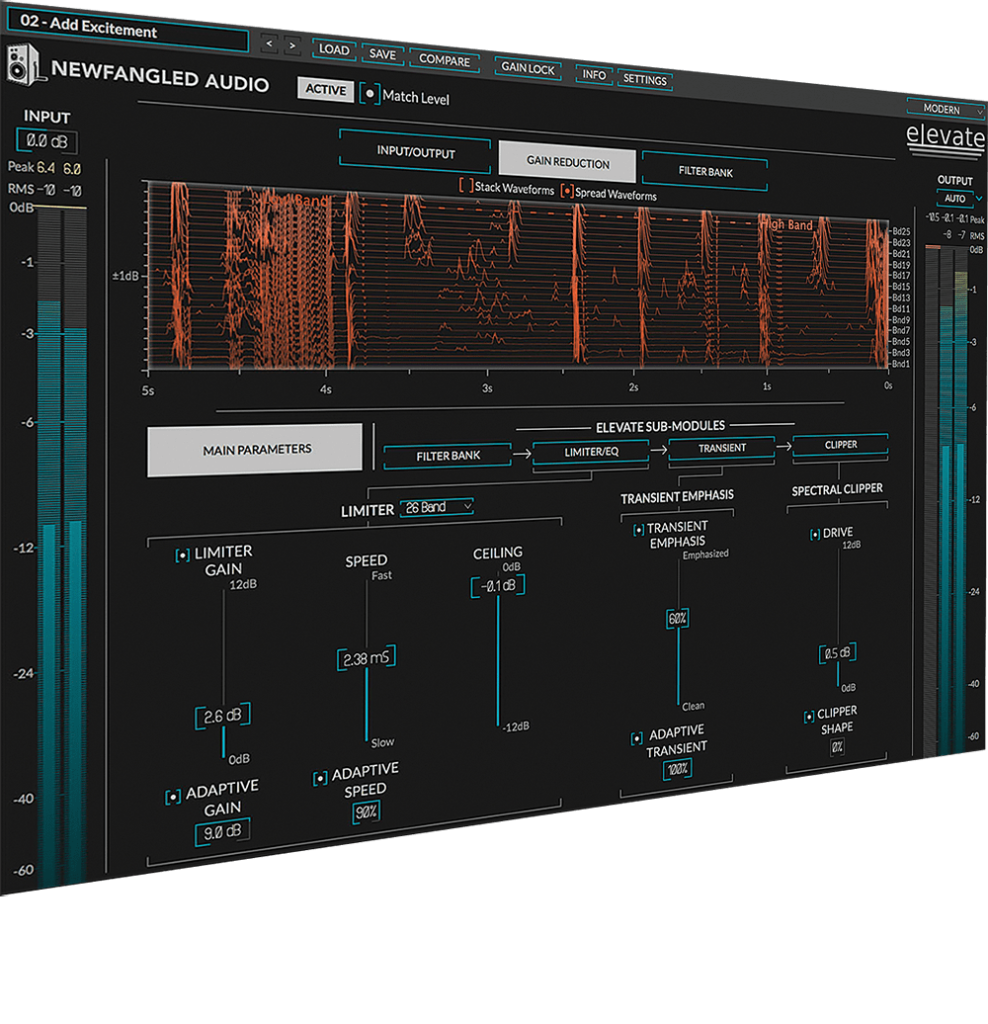 A new, advanced mastering plug-in from Newfangled Audio and Eventide that automatically adapts the compression and transients of 26 filter bands for a transparent, natural sound. It offers excellent fine-tuning, but Ozone is more of a full mastering package. 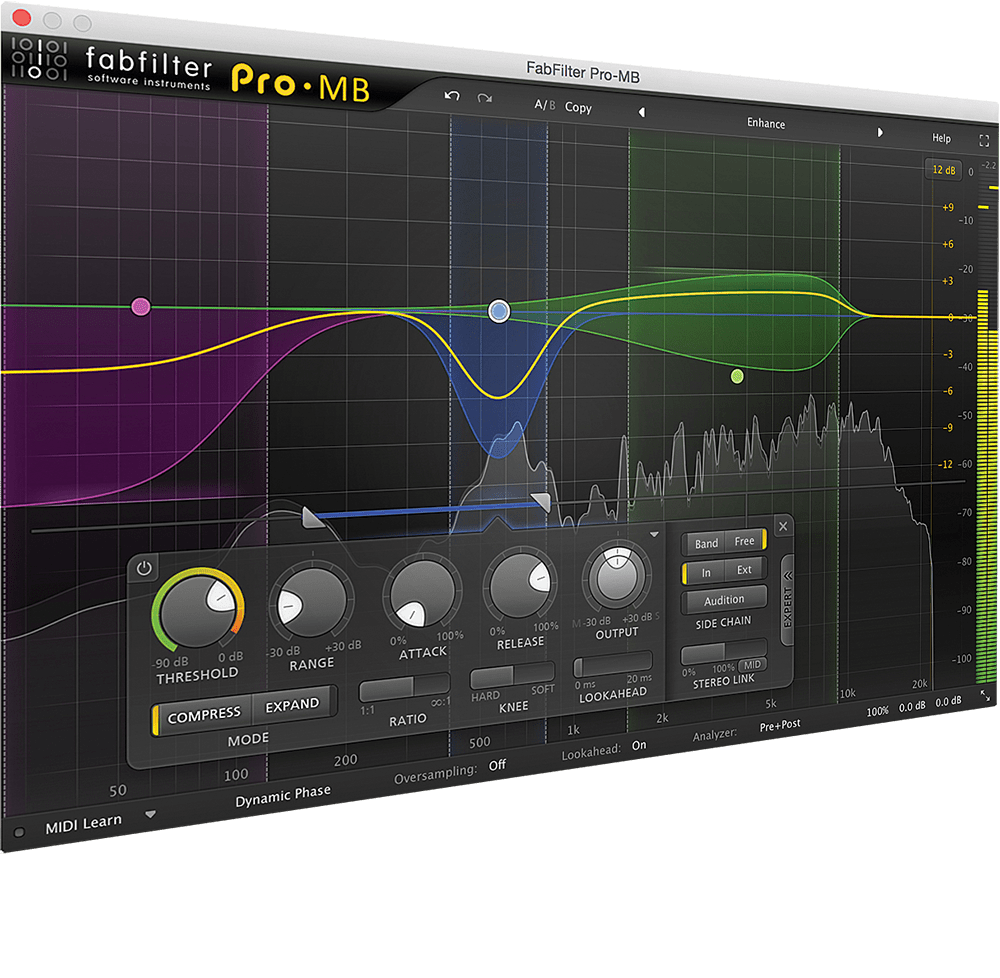