Since 2003, Synthogy has been developing a range of well-respected virtual pianos, all powered by the company’s own Ivory player, which reached its second incarnation in 2011. American Concert D is the latest release for the Ivory II engine, sampled from a classic 1951 New York Steinway D. Being in excess of 49GB in size, […] 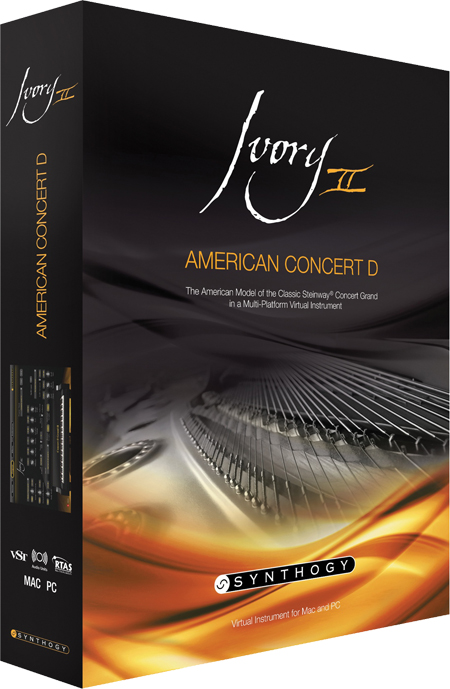 Since 2003, Synthogy has been developing a range of well-respected virtual pianos, all powered by the company’s own Ivory player, which reached its second incarnation in 2011. American Concert D is the latest release for the Ivory II engine, sampled from a classic 1951 New York Steinway D. Being in excess of 49GB in size, American Concert D has clearly been lavished lots of attention, boasting up to 20 velocity layers, harmonic resonance modelling and plenty of tweakable features. As with all virtual pianos, though, the ultimate test is how the instrument plays rather than the impressive size of its spec sheet.

We first looked at the Ivory II engine as part of the Ivory II Grand Pianos review back in Issue 94, which is Synthogy’s flagship library and contains a total of three pianos to choose from. As the package suggests, American Concert D is just a single piano, but this also makes it considerably more affordable than the Grand Pianos collection. It’s also pleasing to see that the player is bang up-to-date in respect to plug-in standards, including full 64-bit support (which is essential for such a memory-hungry instrument) and an AAX version for Pro Tools users. 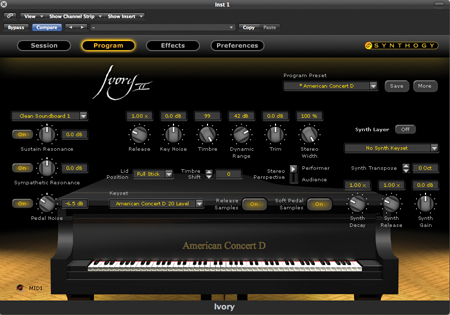 Despite the fact that American Concert D is just a single instrument, it was still a long install process given that there are no fewer than seven DVDs’ worth of sample data to load. That said, it was still pleasing to see built-in flexibility to the installer, which enables you both to stop and start the installation process as well as work off multiple DVDs mounted at the same time (assuming that your machine has an extra DVD drive, of course). You’ll also need to ensure that you have an iLok Key to hand, as this is the current solution for authorising your copy of the software.

Before we get on to the sound of the American Concert D, however, it’s worth saying a few words about the Ivory II engine behind it, which has arguably one of the most feature-rich interfaces we’ve seen for a sample-based piano. Four tabs located across the top of the interface define the principal areas of operation, covering Session, Program, Effects and Preferences.

Arguably the two most important areas are Session – which defines how the instrument responds to velocity, its intonation, tuning and voice count – and the Program page, which works as a means of fine-tuning the instrument itself, whether you’re adjusting the amount of sympathetic resonance, for example, or changing the amount of pedal noise.

While other libraries lavish detail on multiple microphone setups (such as Cinesamples’ Piano in Blue, for example), Synthogy seems to have placed its eggs firmly in one basket with an idealised ‘perfect’ piano sound. Given this approach, it’s reassuring to note that American Concert D sounds fantastic, with all the vibrancy and transient detail you’d expect to hear from a Steinway piano. Unlike some other ‘darker’ pianos, it’s an instrument that can span genres well, being equally adept at both classical repertoire and pop/rock styles.

In that respect, Synthogy has done an excellent job of recording and mapping the instrument in such a faithful way. From delicate and detailed through to an aggressive piano that slices through a mix, American Concert D delivers an impressive performance.

Although there’s plenty of choice in the market, Ivory II American Concert D is a compelling proposition, especially given the versatility of the instrument as well as the refined and powerful playback engine that powers it.

Although Ivory II American Concert D lacks some of the customisation in respect to mic positions, the dexterity and finesse of the Program page certainly enables you to shape the sound of the piano in some radical ways. Of course, some users will always prefer the tight integration of a library based on the ubiquitous Kontakt format, but there’s still a lot to be said for a dedicated player with a set of functions and controls that are specific to the instrument in question.

Synthogy’s American Concert D faithfully captures the tone and clarity of a classic Steinway piano, and has a pleasingly flexible playback engine.