There’s a chance that you could improve the sound of your monitors by simply isolating them from the very surface that they are standing on, and these ISO-Pucks from ISO Acoustics are designed to do just that. Price £52 per pair Contact SCV Distribution | ISO Acoustics ISO-Puck key features: Monitor isolation devices Eliminates the […]

There’s a chance that you could improve the sound of your monitors by simply isolating them from the very surface that they are standing on, and these ISO-Pucks from ISO Acoustics are designed to do just that. 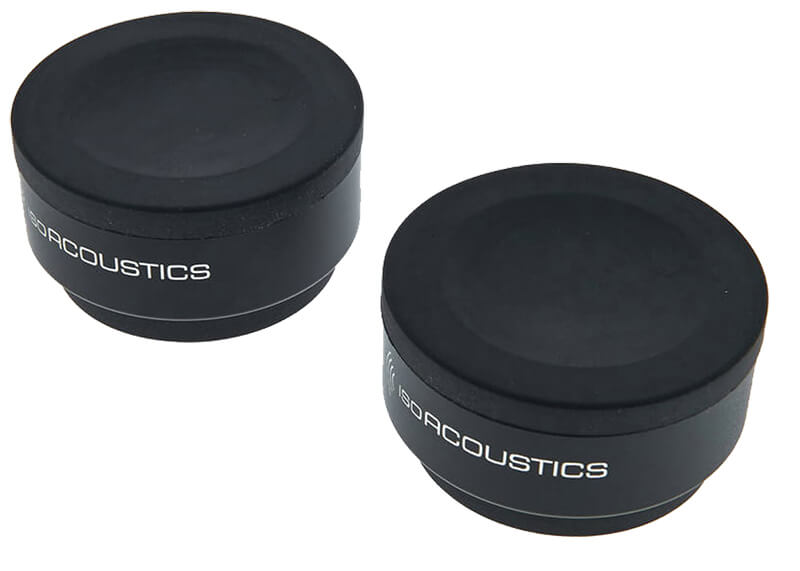 Speakers placed directly on any surface are bound to vibrate that surface and lead to (at the very least) a little bit of sound colouration. To rectify this problem you should have rubber feet beneath each monitor but, even then, it’s unlikely that you will isolate everything.

There are dedicated stands available to do the job – in fact, ISO Acoustics have such stands in the form of the ISO Series – but ISO-Pucks are neater solutions. These are solid, round units and they look and feel what we’d imagine ice hockey pucks feel like, only they have rubber top and bottom surfaces which make them attach very solidly to the base of your speakers. (And stick to them a little too much as we found when we lifted our speakers up!)

You buy them in packs of two, for around £52 per pack, and you’ll need at least three under each speaker. They support monitors up to 9kg per Puck and once set up are difficult to move – a good thing as far as isolation goes, as their build, weight and that ’stickiness’ of the surface mean isolation is high.

As to whether they make a discernible sonic difference, that will depend on the monitors you are currently using, how you are using them and on what surface. We tried them with our PMC Result 6 monitors, setting one up with four ISO-Pucks and the other with none, the thinking being that panning between the two should yield differences.

To say there was a huge difference would be a lie, of course – these were never going to give you the same mind-blowing revelation in your mix that a new set of monitors usually does – but there was a subtle increase in low-end tightness on the tracks we tried.

Mixing is, of course, all about these subtleties and we’re pretty convinced that the ISO-Pucks offer you a considerable amount of extra clarity, especially down under in the lower frequencies. You might baulk at the £150 you’ll need for six but think of it this way: It might be a lot less than the speaker upgrade you’ll need to get similar results.