KordBot takes a new approach to performing chords via MIDI, with a tactile hardware controller. Alex Holmes puts on his harmony hat and plugs in… 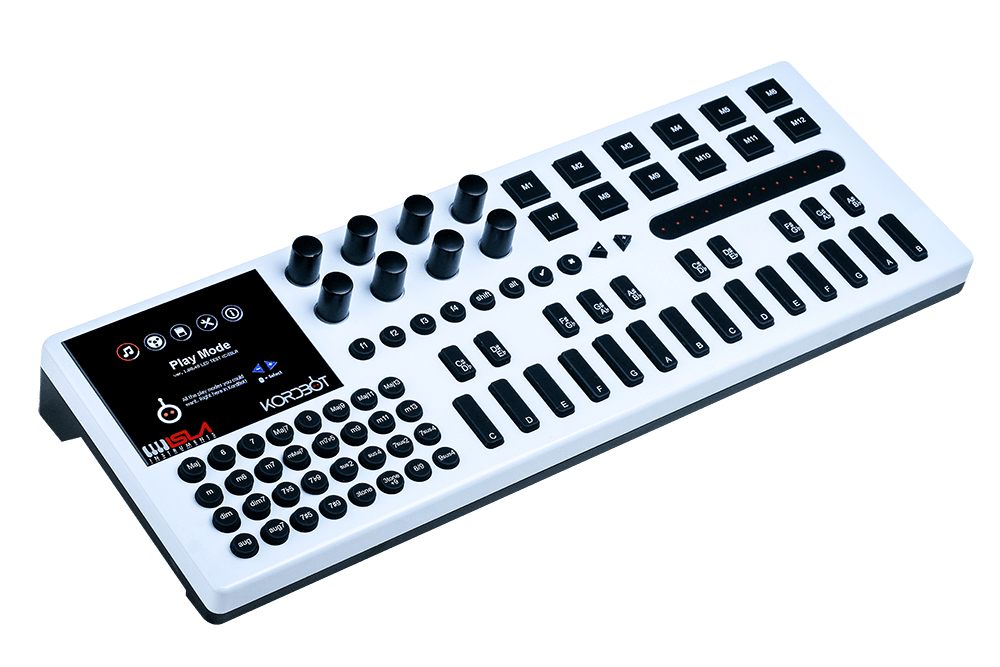 There’s been a trend in recent years for tools especially designed to help you with track composition, be it writing chord progressions, melodies or rhythms. Most of these have either been iPad apps for composing on the fly, standalone software, or plug-ins and instruments giving you musical suggestions in your DAW.

However, the KordBot from ISLA Instruments aims to do this in hardware form, with a handy set of composing tools presented in a compact MIDI controller. Starting life as a Kickstarter campaign, the KordBot sold out in 18 hours – and looking at the featureset, it’s not hard to see why.

The unit manages to pack in a chord generator, arpeggiator, step sequencer, hi-res screen, MIDI controller and more, for a very affordable $279. Truth be told, though, the step sequencer isn’t yet functional on the latest OS, and if you’re importing into the UK, then you’ll have to include additional costs for shipping and customs (very approximately an extra £60).

Isla Instruments is also a very small team that’s doing its best to meet the high demand, but you may have to be patient in order to get your hands on one. That aside, let’s delve into the unit a little more deeply.

KordBot has 32 chord-shape buttons on the bottom left, an illuminated, two-octave keyboard, 12 chord-memory pads, a ribbon controller, eight push-button encoders and a handful of function buttons. Technically, the chord buttons, pads and the keyboard are all velocity sensitive, but it’s quite hard to play with any real degree of control.

The unit has a solid plastic case with rubber keys that have a little bit of wobble to them, but overall, the build quality is decent. You may not need it, but there’s also an SD-card slot so that you can save your chord sets, arpeggios and projects. The real standout with the unit, though, is the 320 x 240 TFT display, which is exceptional for a product at this price point. This mostly displays settings for the main dials, but it can also be used to change settings and intricately program your own arpeggios.

As far as connectivity goes, there’s standard MIDI in and out, MIDI over USB and even MIDI over Bluetooth so you can connect to mobile apps. There are also mini-jack footswitch and pedal inputs, which aren’t ideal for those wanting to add pedal control – but you should just be able to use an adaptor. For power, there’s a standard 9-12V DC input, but you can also power the unit via USB, even using a phone charger if you don’t want to connect to a computer. 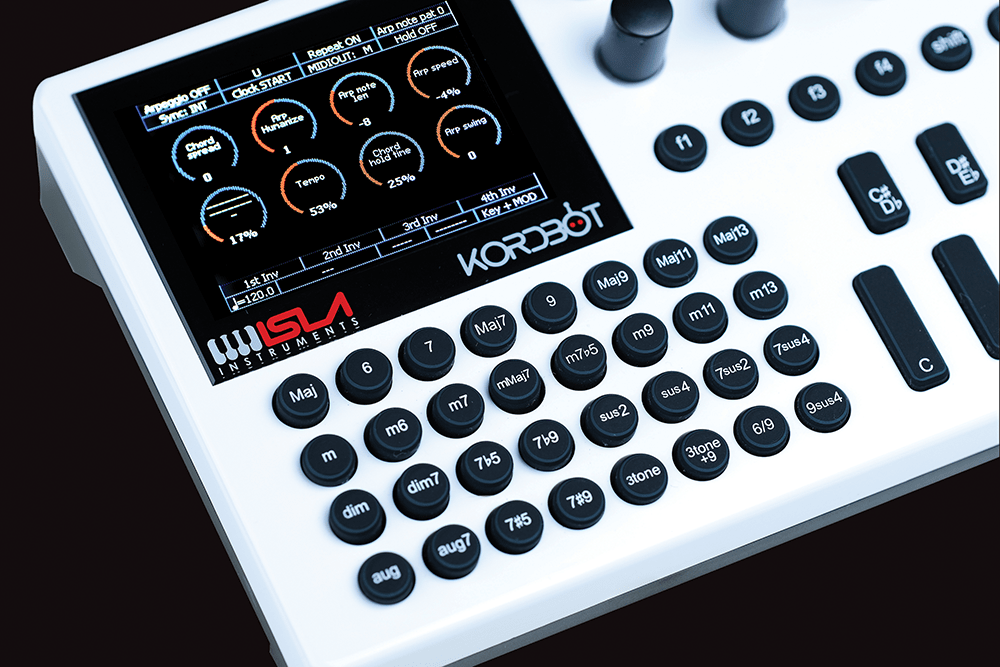 It’s worth noting though, that in order to keep shipping costs down, the KordBot doesn’t actually come with a power adaptor or even a manual. It’s not a major issue though, as there’s a well put together PDF manual available from the website, and a standard USB lead is included to power the unit.

Once you power up, you’ll spend most of your time in Play mode, which shows parameters for the eight encoders, plus their eight push functions. These mostly control arpeggiator settings such as the modes, latch, timing division, note length, and hold time, but they can be edited to show your own choice of controls. You have four main play modes, the first of which is Key+Mod, which lets you select a chord type using the 32 modifier buttons, then play the chords by pressing single keys on the keyboard.

You can play 1st, 2nd and octave inversions using the F keys, and can easily assign the last-played chord to any of the 12 chord memory pads. In this way, you can test out different shapes and build up a collection of your favourite chords to jam out with, without having to remember what you played. It’s a simple but effective system that quickly throws you out of your comfort zone and has you experimenting with progressions you’d have a hard time coming up with using traditional methods. You also get the chord name listed on the screen, plus the individual notes highlighted on the keyboard, making KordBot a useful educational tool into the bargain.

The next two modes are fairly similar and are called Diatonic, and Diatonic+Strum. This differs from the previous mode in that you can play chord sets directly using the four rows of modifier keys, and can play along using the keyboard, with six-note polyphony. These sets can be edited, and there’s even a Progression Suggestions mode that highlights possible next chords based on traditional rules.

In practice, we found it was better to build progressions by ear, but it’s a nice additional feature to have. Diatonic Strum is essentially the same, but while holding a mod-chord button, you activate the notes by using the touch strip. This has 12 zones and is also pressure- sensitive, so you can strum the notes of the chord by sweeping across it, or pick out several notes by placing several fingers on it, with the sequence of notes being controlled by the arpeggio note-pattern settings.

This is great fun, and an excellent way to add life and movement into how you perform chords; although it doesn’t appear to spit out MIDI messages to be used as a CC controller. The final mode is Polyphonic mode, which lets you play notes like a normal keyboard, even allowing you to send different notes out to different MIDI channels. In fact, KordBot is remarkably flexible in its MIDI routings, with a comprehensive setup screen allowing you to assign any of the buttons or keys to send CC and note messages to different MIDI channels, meaning you could control multiple instruments from the one unit.

KordBot is mostly aimed at producers and composers that lack a little in the theory and keyboard skills department.If you fall into that category, and find that you end up relying on the same old chord progressions, then this could be a good way to help you develop your writing. 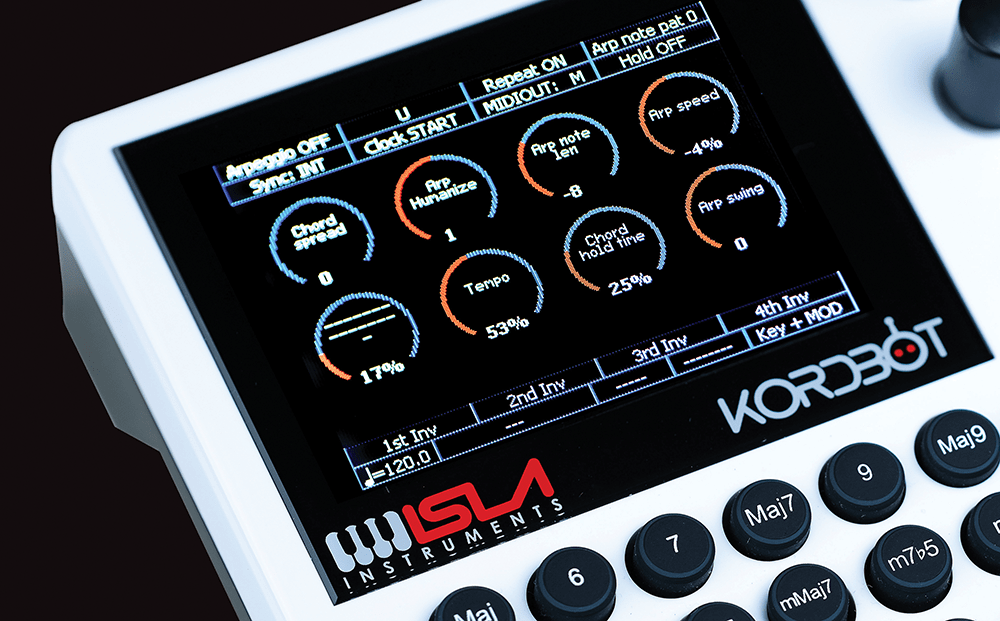 There are, of course, cheaper bits of software out there that can help you develop these skills, but having the chord shapes on specific buttons, and being able to quickly jam with them makes it much more fun to explore. Although we wouldn’t recommend KordBot for velocity work, the extensive mapping possibilities make it a very capable controller – and the promise of a hardware sequencer that does chords makes for quite a unique unit.

At this point, we should really make mention of the excellent arpeggiator, which allows user shapes to be programmed from a comprehensive editing page. It also has a useful humanise velocity function that adds random velocity values, and a fantastic spread control that adds notes incrementally on top of the current chord to build huge stacks. This can also be used to extend the size of the played single chords.

As of writing, the beta is on version 4.01, and a sequencer is due to be added at some point that promises to offer four channels of notes, chords or CCs. The programming of the arpeggiator, along with some of the menus and functions, can be a little fiddly to use. But the potential is massive and, with several updates planned, we look forward to seeing how KordBot develops.

It’s not perfect in places and is hard to get hold of, but these are small prices to pay to support a new and upcoming developer who’s daring to do something a little different.

We wouldn’t recommend KordBot as your only controller, as you’ll probably want something more responsive to play and program beats and melodies – but for working with chords it’s excellent. The beauty of KordBot ultimately lies in the way it can easily take you to places you’d never normally go, getting you lost tinkering with intricate progressions and arpeggios that make your synths and instruments dance in complex and pleasing ways. 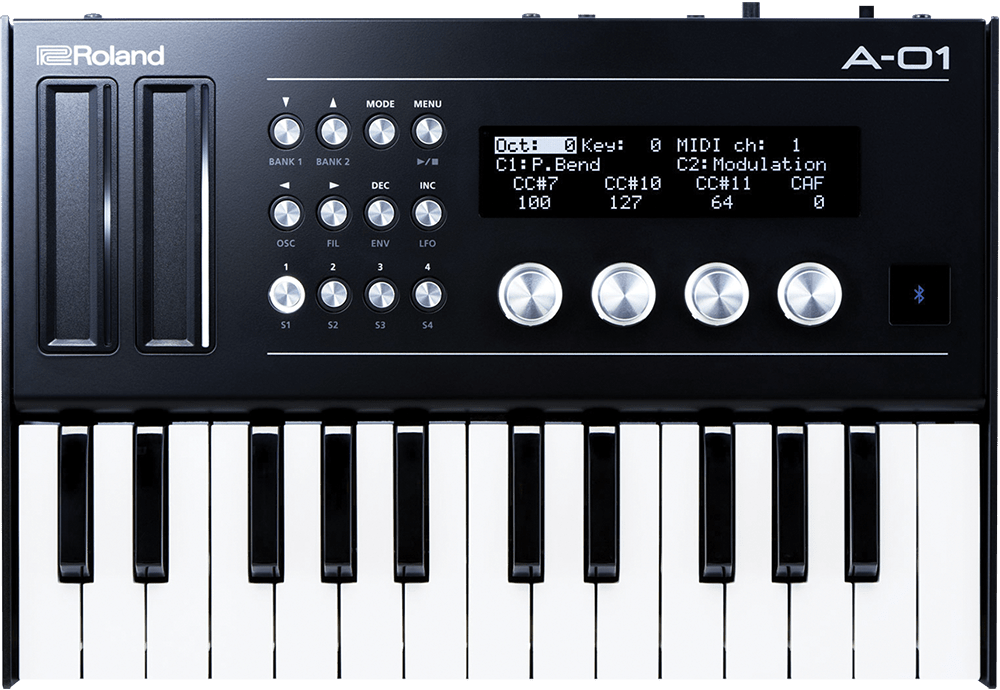 Roland’s little boutique MIDI controller lacks the chord functions of KordBot, but does have assignable dials and ribbons, MIDI and CV out, Bluetooth MIDI, a 16-step sequencer, and an 8-bit mono synth. It can be paired with the K-25m mini keyboard for £85. 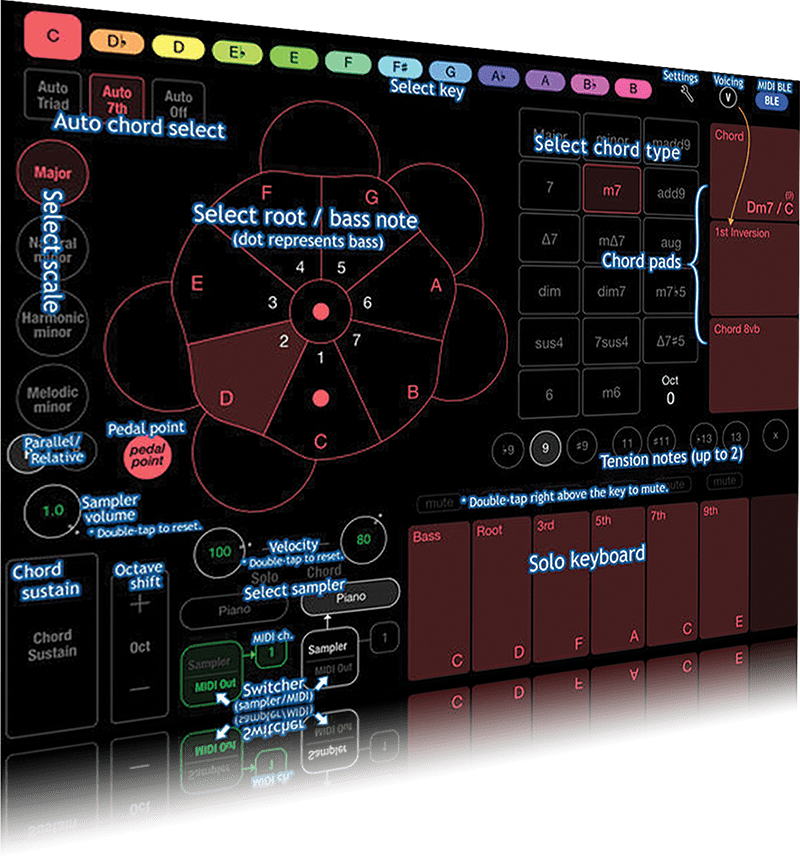 If you’re using a computer or iPad, there are many apps offering tips for chord progressions, arpeggios and harmony. One is Chordy 2 by Studio Phiz, which allows you to select and play chords. It supports Audiobus and Virtual MIDI.