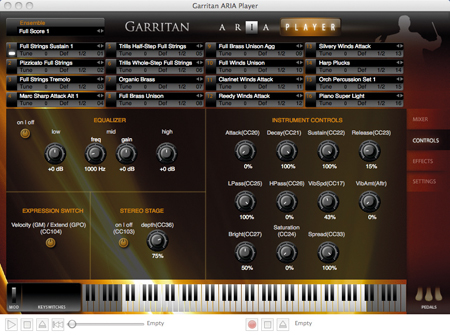 Garritan’s Instant Orchestra is the company’s first product since its acquisition by MakeMusic, makers of Finale notation software. An ambitious collection containing a large quantity of orchestral combinations, mood-based presets, evolving textures and effects, it’s a significant departure from the usual conventional-style orchestral and instrumental libraries.

Using the latest version of the ARIA Player, the idea behind IO was to provide an easy-to-use product for orchestrating Hollywood-style productions quickly.

The content is substantial and covers three main areas: orchestral combinations, orchestral special effects, and mood-based ensembles. The mood-based presets provide a great way of ‘jump-starting’ the process of setting up instruments to accompany cinematic images or onstage action. Each loads with up to 16 patches along with levels, pan, reverb and other control settings, and they cover a large range of emotions and atmospheres. Titles like Ghost Ship help with the selection process, and from there, the presets can be used ‘as is’ or customised via the ARIA Player’s controls.

An abundance of orchestral effects are also included, such as glissandi, rips, clusters, harmonics and so on, plus instruments played in an unconventional manner. The focus here is squarely on dissonance and, like the mood-based material, these sounds will be particularly useful for musicians involved in creating music for film, television and games.
The Combinations are the meat and potatoes of IO: playable patches that consist of various orchestral sections playing together, in unison, octaves and tutti. They’re ideal for filling out existing arrangements when perhaps a conventional orchestral samples library doesn’t provide enough oomph. Exploiting these patches will certainly help to achieve a larger-than-life cinematic-style soundscape.

Anyone already using the Garritan Personal Orchestra may ponder before buying Instant Orchestra. What’s the difference? GPO comprises solo instruments and standard orchestral sections and compositions are built track by track. A basic knowledge of orchestration, at least, is therefore required. IO, though, is designed for those who know little about orchestration, or even if they do, may not have the time to sequence them.

It certainly proved quick and easy to assemble short cinematic-style cues using IO alone, but for longer pieces a conventional library such as GPO is probably required. Indeed, both libraries compliment each other very well, and you can load patches from both products in a single instance of the ARIA Player.

New controls have been added to the ARIA Player when IO is loaded. An Expression switch provides a choice of using velocity for volume or the mod wheel for volume and dynamics. ADSR controls also appear instead of the usual GPO instrument variation controls, useful for disguising fast repeated notes. We missed those because, like GPO, IO doesn’t include round-robin samples, although it does have something similar – automatic variability, built-in to many of the presets but hidden from the user.

Given that this is a 16-bit library, the sound quality is very good, although some patches sound ‘synthy’ when exposed. That said, much of the material is at its best when used for layering, either within IO itself or with other libraries. Also, careful use of the built-in ADSR, EQ and other instrument-specific controls makes a huge difference.

Comparisons with high-end products such as Symphobia and others are inevitable, but frankly, given its very modest price, Instant Orchestra has a great deal going for it. It’s easy to use, flexible, delivers results quickly and in the right hands can sound absolutely huge.

Suitable for pros and amateurs alike, IO is an excellent value-for-money cinematic-style library that punches well above its weight.