Miroslav Philharmonik 2 CE puts a complete orchestral instrument under the fingers of musicians on a budget. Keith Gemmell conducts his investigation… Details Price €119 Contact +44 (0)1223 234414 Web www.ikmultimedia.com Orchestral sample libraries, complete with all the sections and important solo instruments, cost a great deal of money to record and develop. That’s one of […] 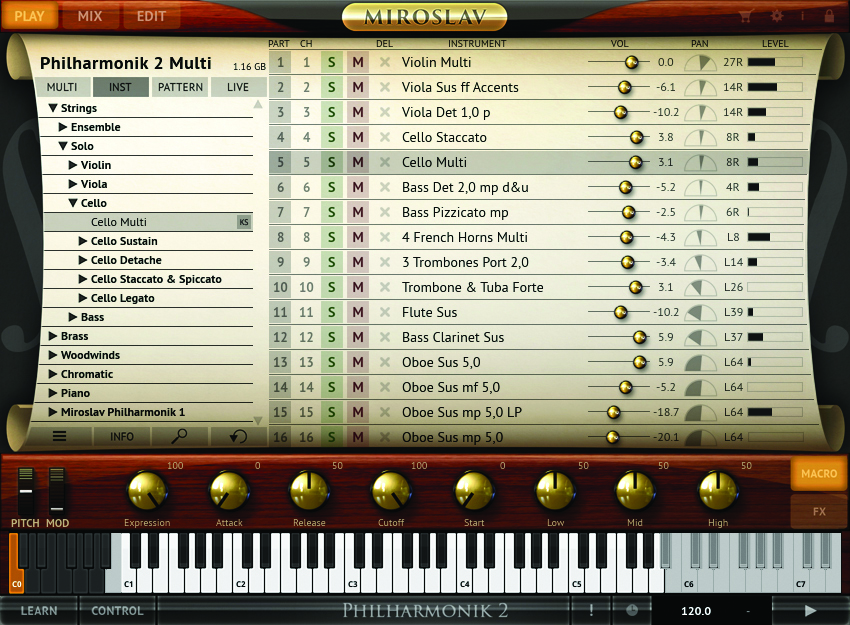 Miroslav Philharmonik 2 CE puts a complete orchestral instrument under the fingers of musicians on a budget. Keith Gemmell conducts his investigation…

Orchestral sample libraries, complete with all the sections and important solo instruments, cost a great deal of money to record and develop.

That’s one of the reasons why, once established, they tend to remain pretty much unchanged for many years. Every so often, they are updated in some way, usually to keep abreast with technical changes. Garritan Personal Orchestra 4, for example, was recently upgraded to GPO 5 with a large helping of extra samples from the defunct Garritan Orchestral Strings.

Both the aforementioned libraries are mere youngsters, though, compared to the original Miroslav Philharmonik Orchestra, which first appeared over 20 years ago. The full, newly enhanced version with extra content recorded at CNSO Studios in Prague is now under the auspices of IK Multimedia.

For those on a budget, IK has recently released a slimmed-down version, Miroslav Philharmonik 2 CE, based on SampleTank 3’s 64-bit engine. With a 10GB library and over 700 instruments spread across the same categories as the full version, the word ‘budget’ doesn’t really apply, content-wise.

That said, the 16-bit sample rate here is lower than the full version. The upside to this, of course, is that it is more CPU-friendly, making it suitable for all types of computer. It’s supplied as a standalone workstation or a DAW plug-in. It can also be used as an add-on instrument collection for SampleTank 3. 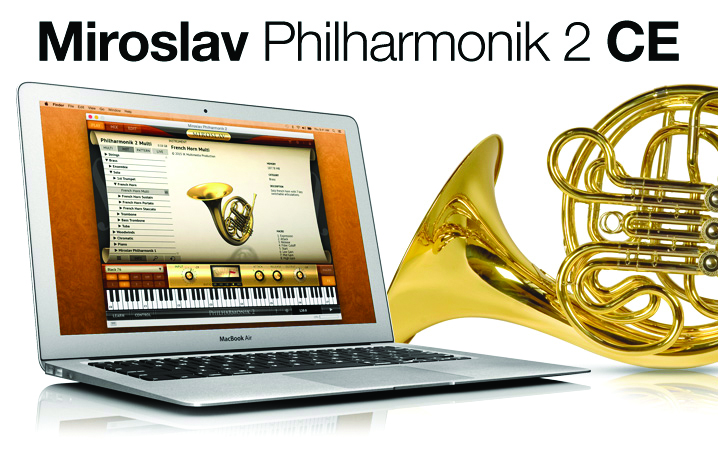 All four sections of the orchestra are represented – strings, brass, woodwinds and percussion. There’s also a range of choirs and four grand pianos. Articulations are numerous throughout, which is ideal for experienced composers. Fortunately, for orchestral newbies, who are more likely to be attracted to this library, a range of playable ensembles is also provided for simple arranging.

As well as the sections, there are also plenty of solo instruments – again, with many articulations that can either be keyswitched on-the-fly in multis, or loaded as single samples.

The sound quality throughout is, on the whole, excellent and pretty much what you might expect from a library of this price – good, but not spectacular. They’re certainly on a par with the competition, though, such as the Garritan Personal Orchestra or the HALion Symphonic Orchestra.

The strings, in particular, have a lighter sound than many other orchestral libraries with a nice woody timbre, which we found very refreshing. 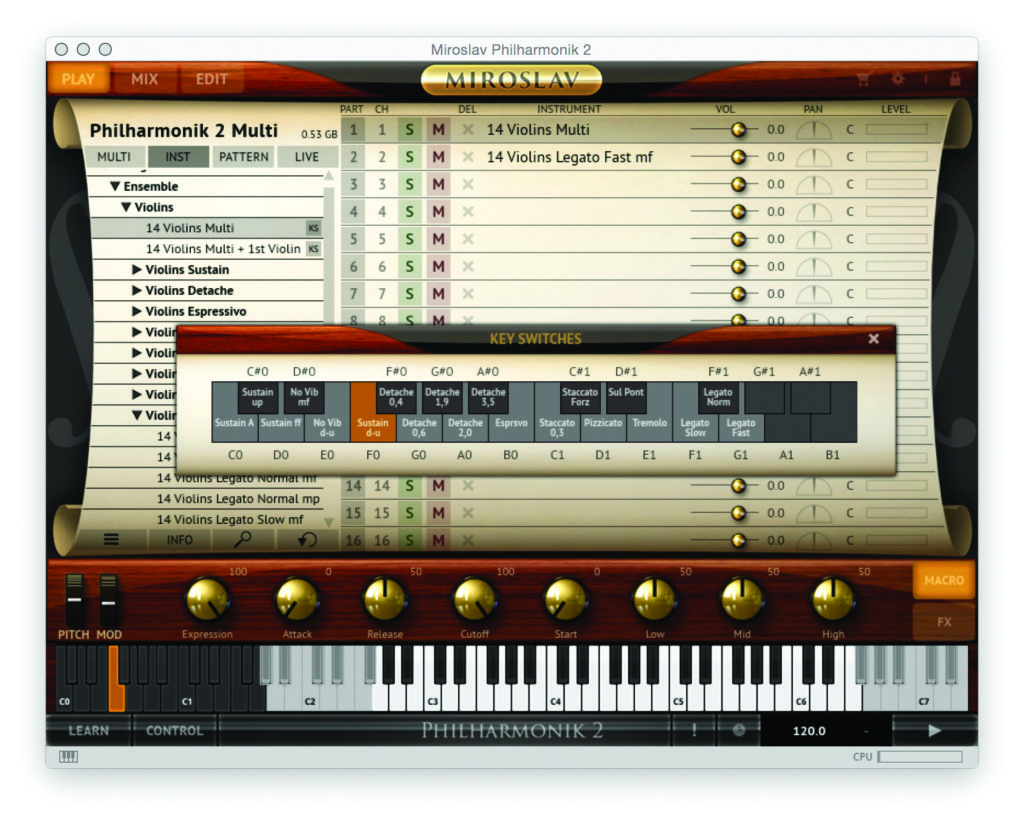 The Play window is where you select instruments and organise their articulations. For example, select a 14 Violin Multi and it loads with 20 articulations, which can then be played and key-switched chromatically from C0 to G1 on a controller keyboard.

Selected articulations and their switches are displayed in a separate panel. For more in-depth work, articulations can be loaded separately. Legato Violins, for example, contains 11 legato choices. A set of instrument-specific macros is displayed just above the virtual keyboard. 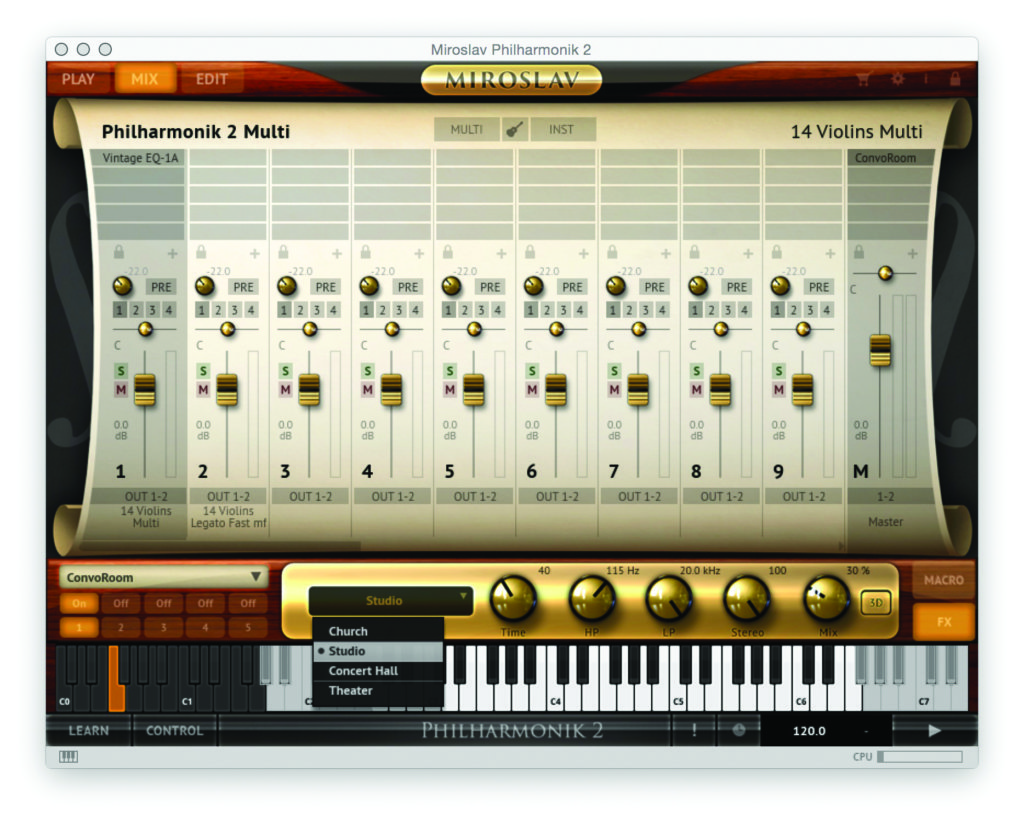 FX controls for both can be found just above the virtual keyboard. 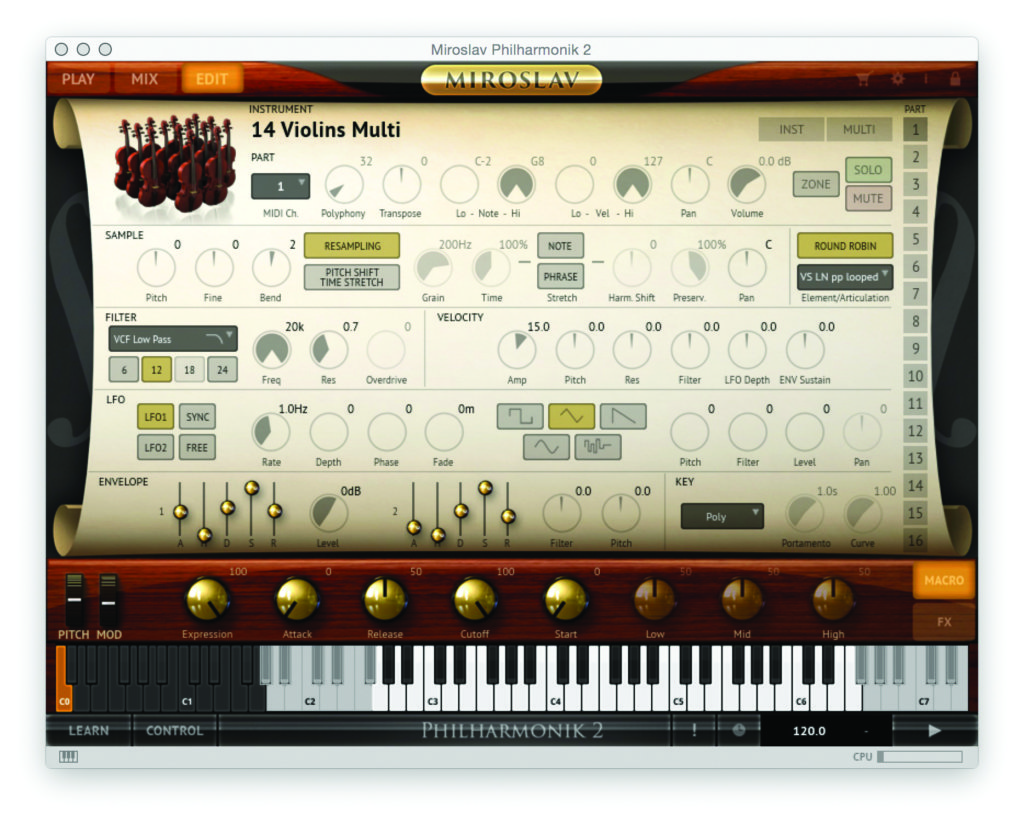 The Edit window contains resampling, pitch and time-stretch, controls for fine-tuning selected samples along with filter and velocity controls. Below these are sections for two LFOs and two ADSR envelopes. To their right, we find a choice of polyphonic, mono and legato one- and two-key modes, with portamento and curve controls.

Do you really need this?

This library was the first of its kind back in the day and was developed by the bassist with Weather Report, Miroslav Vitouš, primarily for his own needs. It’s been used by many media composers since.

This version retains some of the original material, along with much that is new and is very computer-friendly. So if you are on the look out for a complete orchestra at a bargain price, the Miroslav Philharmonik 2 CE could be just what you need.

Garritan Personal Orchestra 5 (GPO5) is a good choice and contains a complete orchestra with over 500 instrument choices, along with comprehensive control and a very easy-to-use ARIA player. The HALion Symphonic Orchestra has a wide range of orchestral instruments, including solo, tutti and ensemble sounds in various playing styles and articulations. HALion Sonic SE 2 is included in Cubase (version 7.5 or higher) and Cubase Artist (version 7.5 or higher) and Nuendo NEK (version 6.5 or higher).

A very welcome addition are the choirs – female, male and mixed – that are as good, if not better than, other budget choirs we’ve encountered.

So, too, are the tuned chromatic percussion instruments, marimba, glockenspiel and chimes. Other instruments of note include organ, guitars, harps and harpsichord and a full orchestral percussion section, complete with maps. As if all this were not enough, to round it all off there’s a huge selection of mixed ensembles spread across the keyboard for a fast workflow and useful sketching. Titles like Action Sequence and Brass Drama provide a good idea of what to expect here.

To top it off, 34 plug-ins from IK Multimedia’s SampleTank 3 workstation can be inserted in the mixer, plus a convolution reverb and four mastering processors from their T-RackS. These can be controlled individually, or by using each instrument’s eight macros which enable quick access to the most commonly used parameters.

Although articulations are listed on IK Multimedia’s website, there’s no in-depth information about editing. The Edit page itself contains a ton of controls so make sure you refer to the extensive manual

It’s difficult to fault what is, after all, a remarkably comprehensive orchestral workstation that contains everything needed for adding orchestral music to existing tracks, be they pop, jazz, cinematic or whatever.

For pure classical-music projects and highly professional mock-ups, though, things have moved on technically in this area, with a variety of individual-instrument sample libraries on the market. They, of course, are far more expensive and the price paid in many cases for a single instrument will be higher than the complete Miroslav Philharmonik 2 CE, which also contains a very decent set of solo instruments, anyway. And if you’ll pardon the pun, this is where IK Multimedia’s offering scores very highly indeed – it’s fantastic value for money. 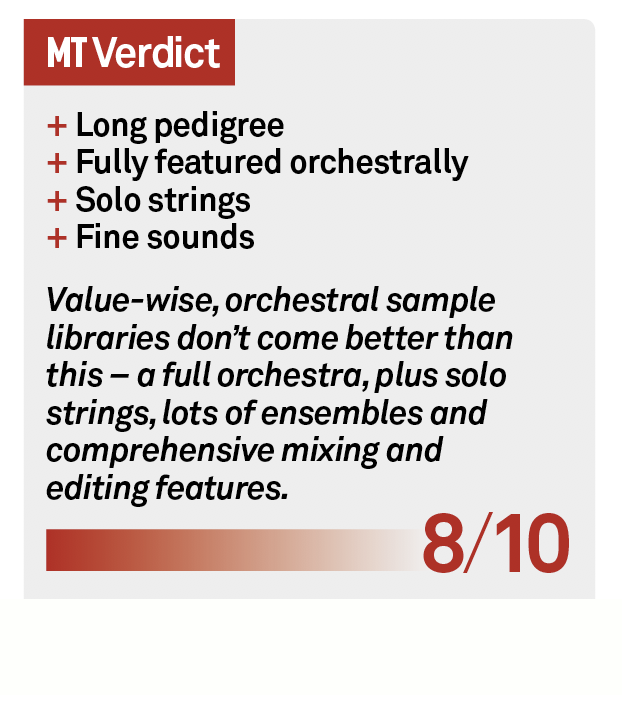