There’s never been a better time to be a computer-based guitarist. Hollin Jones rocks out with AmpliTube 4… Details Price €149.99 Distributor IK Multimedia Contact Via website Web www.ikmultimedia.com AmpliTube was one of the first guitar and bass modeling suites on the market and the fact that it’s only just got to version 4 shows that […] 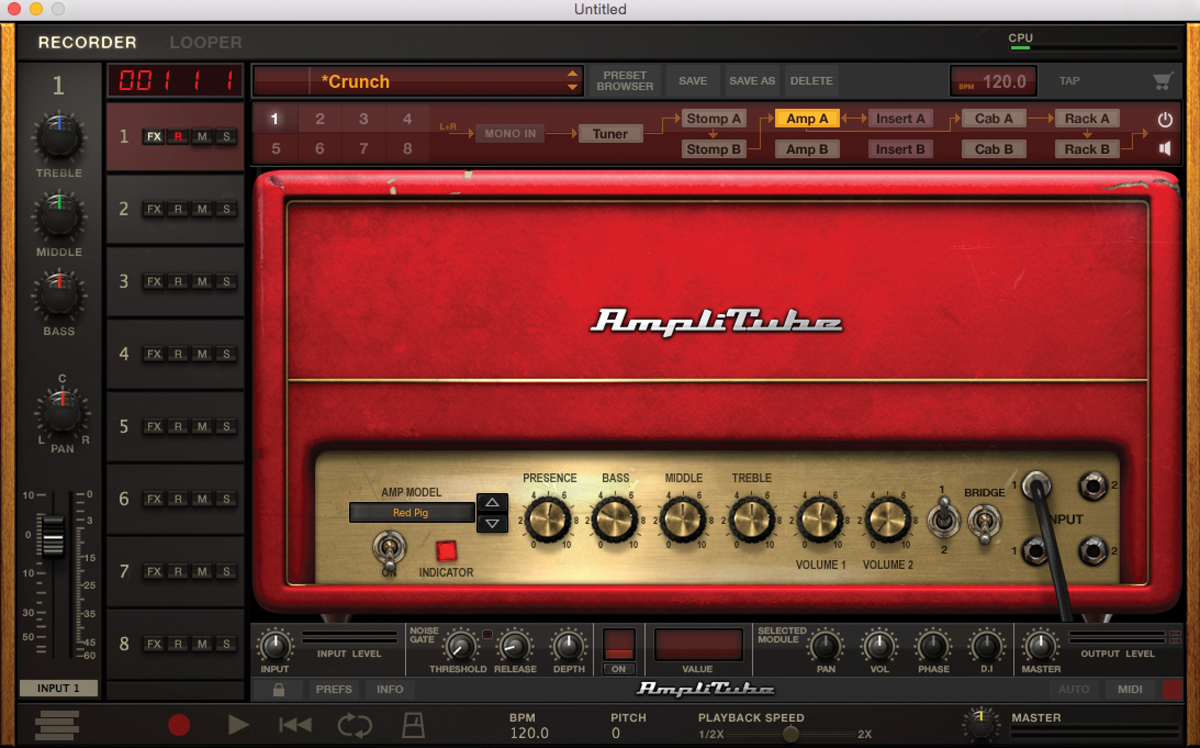 There’s never been a better time to be a computer-based guitarist. Hollin Jones rocks out with AmpliTube 4… 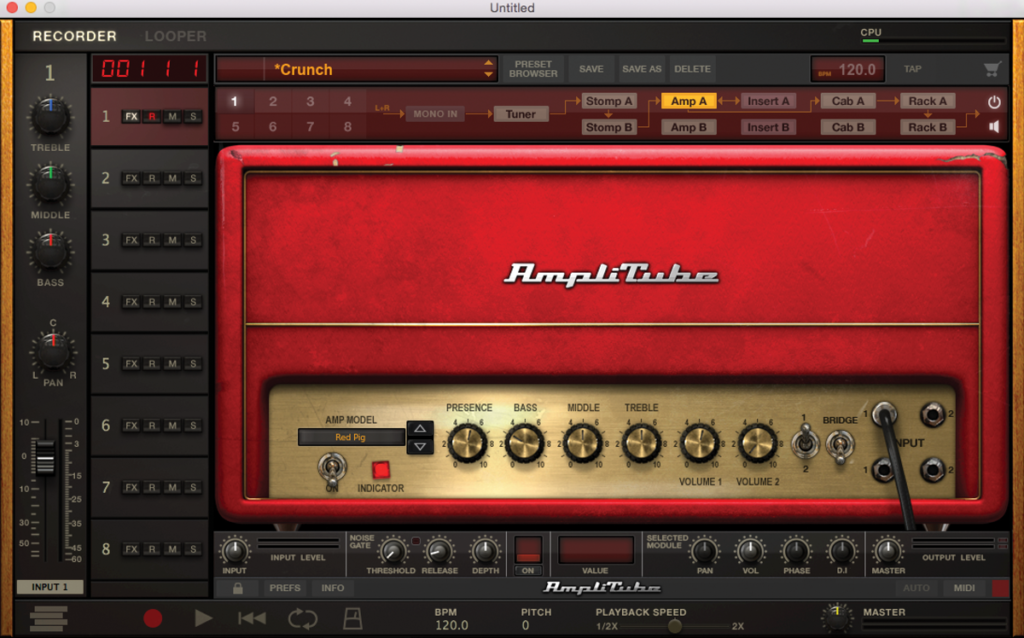 AmpliTube was one of the first guitar and bass modeling suites on the market and the fact that it’s only just got to version 4 shows that each version has a good shelf life. If anything, guitarists are more likely now than at any point in the past to use software processing for both studio and live work. Computers are more powerful and software is more stable than ever, and iOS devices are catching up. There’s a mobile version of AmpliTube as well, with many of the desktop features available as add-ons.

AmpliTube for Mac and PC works as a standalone app or as a plug-in and comes with a lot of new stuff compared to version 3. As well as a cosmetic overhaul there are a lot of new features and gear models.

First up is the Cab Room, a way to control the virtual generation and recording of your sound. This gives you a nice ‘room’ in which your speaker appears together with one or two microphones that can be moved around and repositioned just like you would do in a real studio. The difference with software is that you can keep swapping gear as much as you like.

The Cab Room has five main sections. You can choose a speaker cabinet and select individual speakers to go inside it. Mics can be selected and placed in the room and you can change the room itself to one of a number of available spaces. Last but not least, there’s a mixer section where you can mix and blend the different signals such as mics, ambience, DI signal and main mix. This is all very nicely designed and easy to use, and tailoring just the kind of sound you want is not difficult. 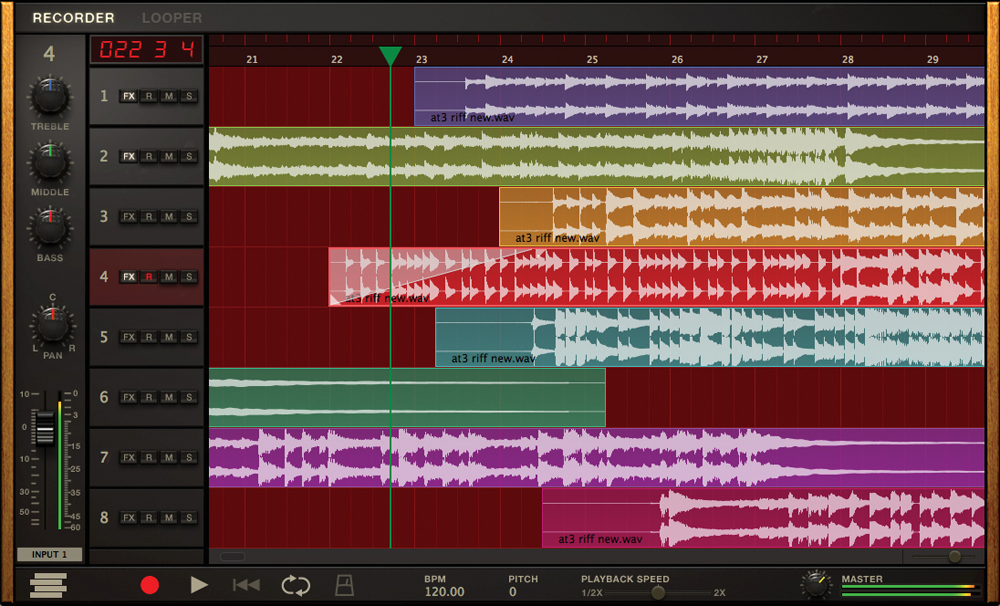 Classic Kit
You get a good selection of gear thrown in as well. For a start, there are five new amp models recreating some classic British amplifiers from Marshall. There are four more amps, 10 stompboxes, 10 cabinets, 29 speaker models, three mics, two rack effects units and two tuners.

As you would expect, these can be combined in any way you like, you’re not restricted by having to use matching components. AmpliTube also comes with the Custom Shop application, IK’s online store from where you can audition and buy all kinds of other content such as amps and stompboxes. This way, you can add just the gear you want, and many items are available in bundles at a discount. AmpliTube is essentially the container for the gear.

The presets are really good, with tons of power and character available and you can tweak setups easily by navigating the different sections. There are two pedalboard slots then two amp stages, two insert effects slots and then the cabinet stage.

Finally, two more effects racks are available, and setups can work in series or parallel. The gear in each section has its own controls that you can edit easily with the mouse, and effects, amps and cabs have presets, so creating customised processing chains is easy. MIDI learn is widely supported, too, so setting up foot control of effects is straightforward. IK makes hardware such as Blueboard to enable this kind of thing. For live performance, you might want to assign MIDI controls to the preset slots so you’re able to remotely change presets.

Lay it Down
Also new in version 4 is an acoustic simulator pedal that can take an electric signal and turn it into acoustic sound, with different body types. The stompboxes and rack effects are also more or less interchangeable, so you can use them across any effect slot.

When running in standalone mode, you now get an eight-track recorder with essential controls and effects, as well as the ability to import audio files, set loop points and even change pitch or speed independently of one another to help you practise tricky riffs. Finally, there’s a MIDI-controllable four-track looper with a futuristic interface. This lets you record your own loops as backing tracks and build up parts without leaving AmpliTube.

AmpliTube 4 is slicker and more powerful than its predecessor and delivers excellent guitar and bass tone with a flexible interface. A few presets contain ‘locked’ modules that you have to buy, but the majority of bundled presets don’t. The virtual cab room works really well in letting you tailor your sound and the many amp, effects and cab controls can be tweaked and most linked to MIDI controls for live performance. Factor in extras such as the online preset exchange and there’s much for guitarists to like. 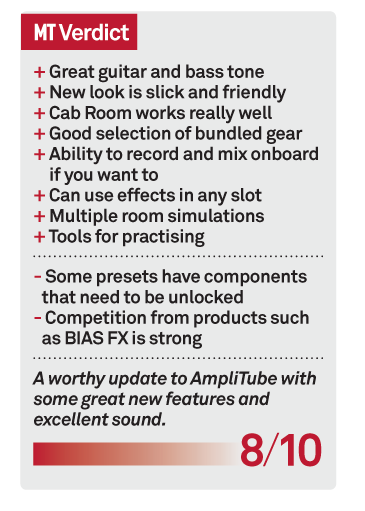