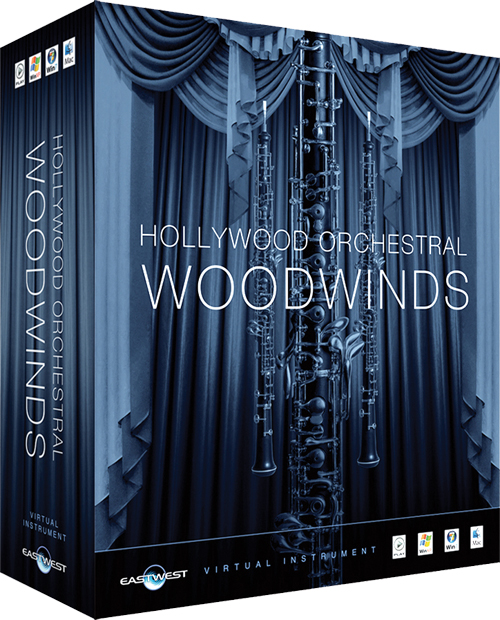 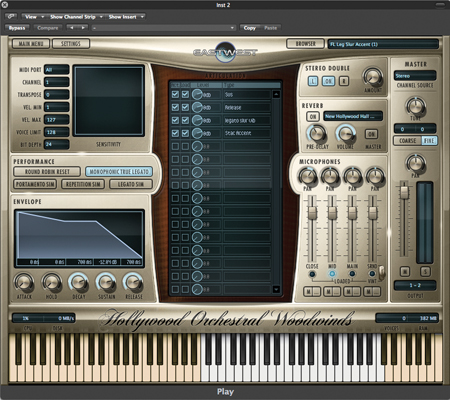 Users of the previous Hollywood Orchestral libraries should be immediately familiar with the style and layout of what’s on offer here. The library uses EastWest’s PLAY system, which although not as dexterous as Kontakt has certainly evolved into a competent 64-bit-enabled playback engine. The library itself is organised in much the same way, with true legato versions of the instruments, nine-way staccato and staccatissimo articulations, plus a range of other playing styles and effects. You’ll also find the usual five different microphones positions, covering close-mic’ing, two types of Decca Tree, surround channels and a set of vintage mics with a darker tone.

Interestingly, of course, HOW enters a market that is relatively densely populated already, with alternative solutions from CineSamples (CineWinds) and Hollywoodwinds, as well as Orchestral Tools’ Berlin Woodwinds. What’s important to note, though, is the marked difference companies seem to be taking in respect to woodwind samples. Some seem to sampling the ensemble en masse, arguably trying to capture the energy and flourish of a woodwind section in full flow; others, including HOW, take the approach of sampling the woodwind section on an instrument-by-instrument basis.

HOW’s meticulous approach clearly pays dividends in respect to the amount of instruments on offer. Certainly, we’d struggle to think of a more comprehensive list, with many of the lesser-known instruments – including Eb clarinet, bass clarinet, bass flute and alto flute – all being represented. There are also plenty of colourful articulations that other libraries can miss out, including flutter-tonguing on the flutes and a range of different runs covering chromatic, major, minor and whole-tone scales. However, we would have liked to see some ensemble pairings – like two flutes, two clarinets or two bassoons – although it’s worth noting that the flute does come as Flute I and Flute II variants, allowing you to build your own ensemble by layering the two patches.

As you’d expect, the instruments included in HOW are playable and expressive, from the movement in the true legato patches and mod wheel transitions between non-vibrato and vibrato playing to the depth of velocity levels in the staccato patches. The sound of the library, though, is a lot drier than others, which although fine on strings and brass, sometimes misses out on the ‘back of the hall’ sound that seems to really suit the placement of virtual winds.

Given the use of individual instruments rather than a tutti ensemble, there’s little doubt that HOW represents a good solution for someone wanting to create a detailed and expressive virtual woodwind section. However, without some of the more powerful tutti patches or even doubled-up sections, it sometimes misses out on some of the bold colouring touches other libraries can deliver. That said, it’s still an approach that matches the ethos for detail that characterises the rest of EastWest’s other orchestral libraries, but it maybe lacks some of the wow-factor and completeness of something like Hollywood Brass.

– Lacks the sonic depth of other wind libraries

Hollywood Orchestral Wind is a detailed collection of solo woodwind instruments. Some users might miss the ensemble patches, but it’s still a competent package.