Is it a String Machine? Is it a Vocoder? It’s both! We go from vintage to modern with Waldorf’s take on the classically inspired synth with contemporary ambitions. 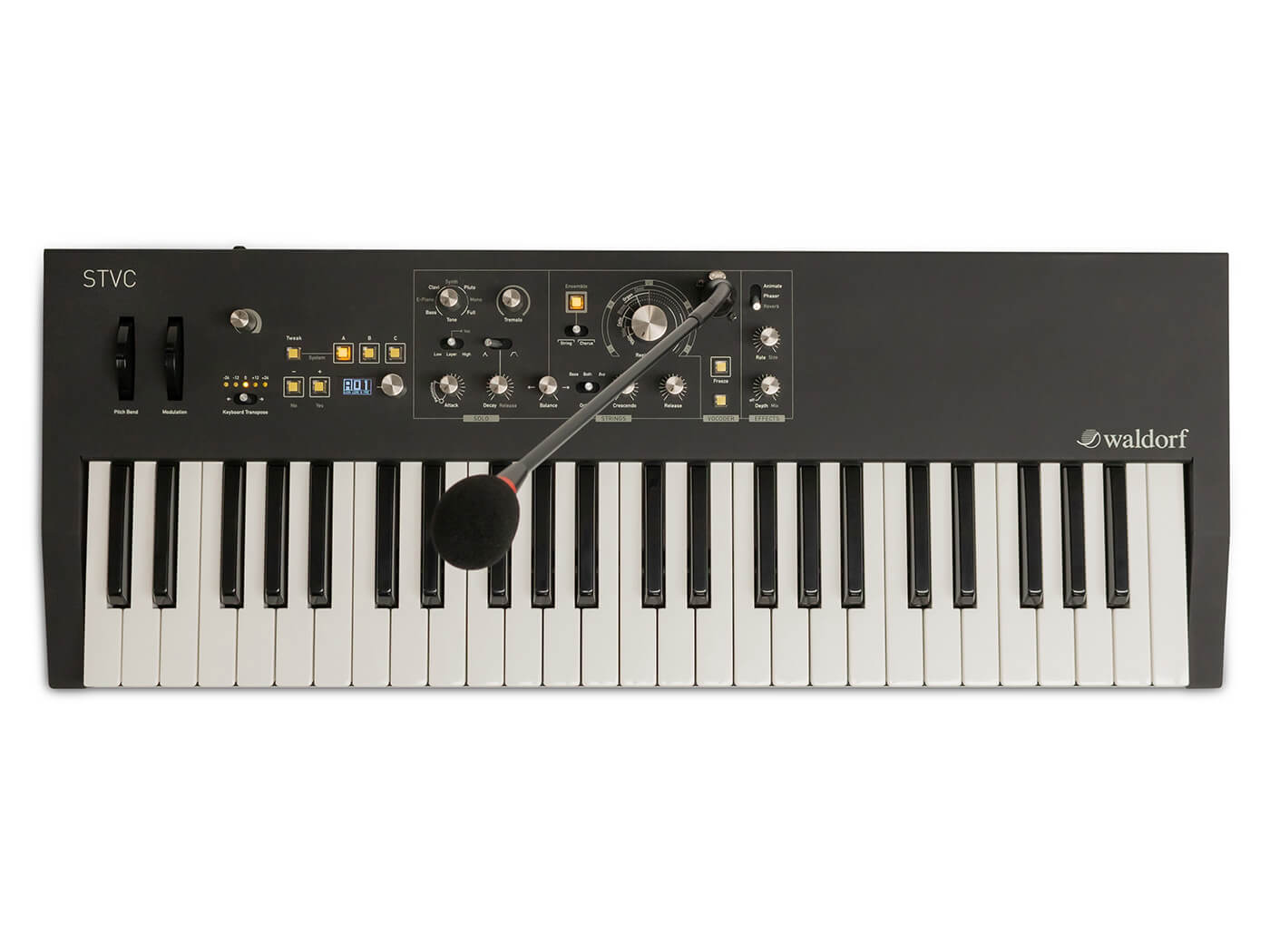 The much-anticipated STVC from Waldorf comes hot-on-the-heels of their groundbreaking Quantum flagship synthesiser. While the Quantum could be regarded as the synth of all synths, the STVC has a very different and more considered ambition, drawing on a vintage legacy that offers plenty for contemporary production.

As if we were left in any doubt, the four letters that provide the business card for the STVC are not quite an acronym, but they do offer a distinct clue about its onboard modes of sound generation.

Back in the 70s, polysynths were expensive and limited in terms of polyphony, meaning that if you wanted to create a string pad wash, you’d have to track things up – an expensive option as it required a multi-track tape machine. The alternative was to consider using a string machine. In essence, string machines were designed to cost-effectively allow musicians and producers more polyphony for string pads, but at an efficient price point, hence there was a golden age of such machines, with products such as the Solina String Synthesiser being a particular favourite. String machines have now heavily infiltrated contemporary production, through artists such as Radiohead and Lindstrøm.

Another similar machine, the Roland VP-330, went a stage further, offering string ensemble sounds along with choir sounds, and an option to vocode. This became a firm favourite with jazz/funk bands, with Earth, Wind & Fire being established endorsees.

With roots firmly in the past, you’d be forgiven for thinking that the STVC is a nostalgia product, but its contemporary stylings and modern sound make it ideal for current exploitation, and something of a dark horse too. 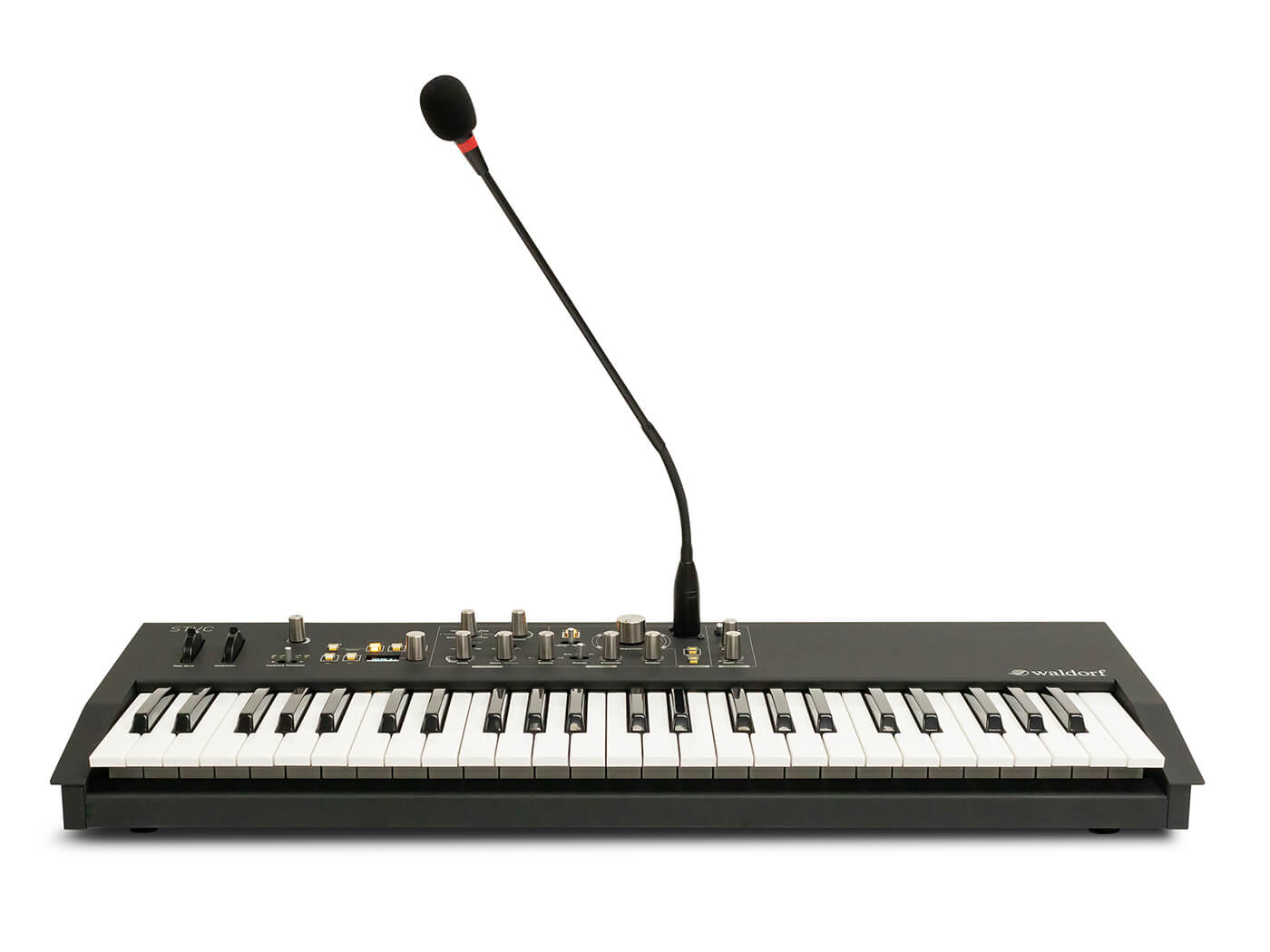 Removing the STVC from its box, you are hit by its weight, which is largely due to the all-metal chassis. It’s reassuringly heavy, while the keyboard itself offers a very playable synth action, which feels slightly weighted but responsive too, with plenty of quick return should you find yourself playing faster vocoder lines.

The microphone socket is located on the front panel, with a condenser microphone supplied. However, it should be noted that power delivery to the mic socket is a mere 2.5v, so you will not be able to use conventional phantom powered mics in this setting. To be fair, though, my experience with vocoders has always dictated that dynamic mics can be a better choice. Should you want to go condenser, you can do so by using the line-in socket on the rear panel, which can be switched to accept either a mic signal, or a different carrier, should you want to veer from the internal waveforms.

The pot layout on the front panel is classic and uncluttered, with metal pots and illuminated buttons guiding your way. My review model is one of the earlier machines to make it into the UK, and there is a little bit of lateral movement in the pots, while the switches and buttons feel nice and sturdy. Given the superb quality of the casing, I hope that Waldorf will tighten up the pots. 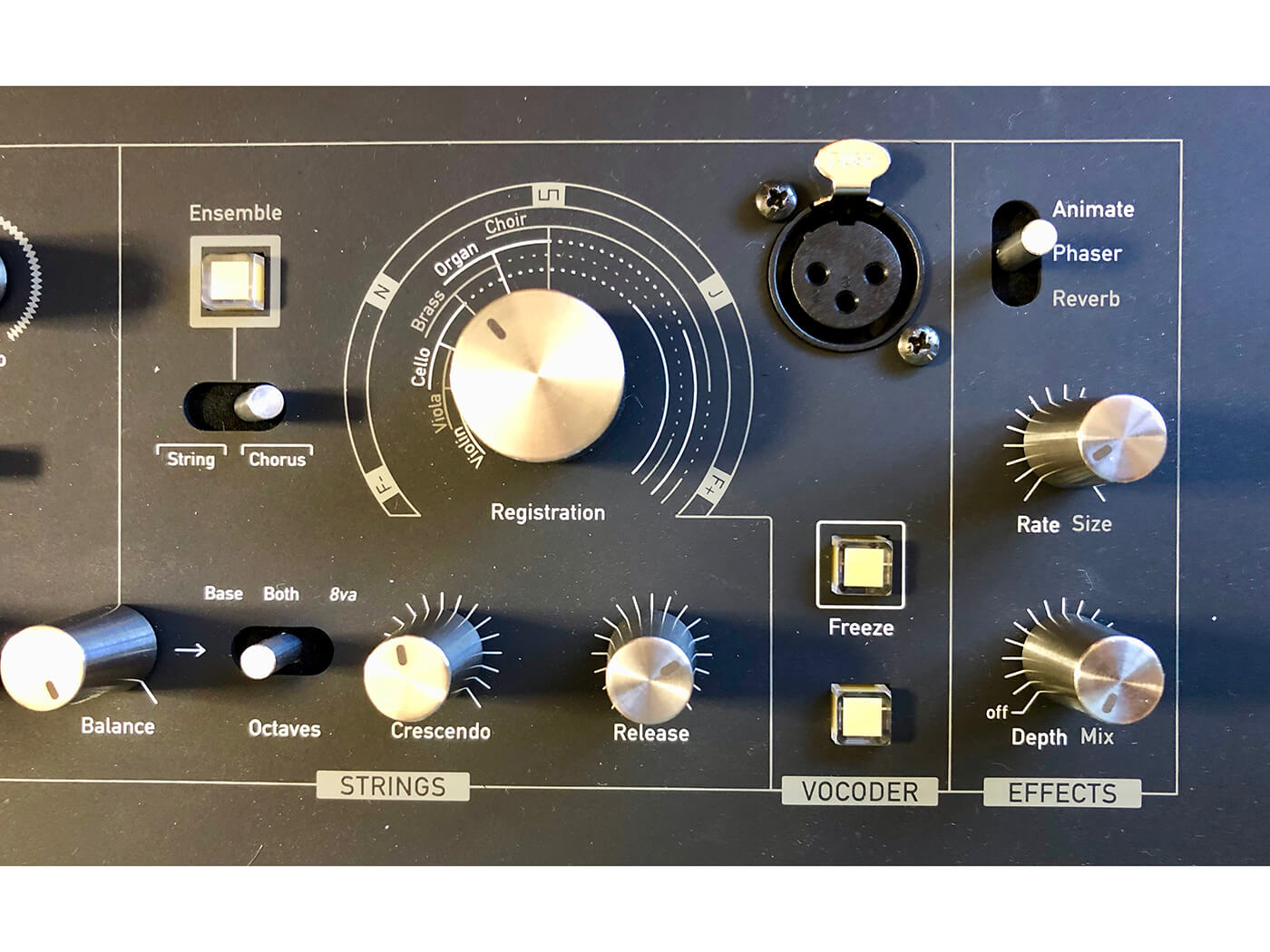 Waldorf has been pretty smart with the sonic construct of the STVC, which is largely split into two. To the left of the main panel, you have what is described as the Solo section, and I have to confess that I find this a tad misleading as it implies that it is purely a monophonic sound source. In reality it is a 16-note polyphonic sound source, with descriptions such as Bass and E-Piano. Sounds are selected via a rotary pot, which morph and glide from one timbre to the next, with the sounds to the left of the pot being polyphonic, and a couple of those to the right being monophonic. These sounds are pretty simple, with some of them being reminiscent of basic synth timbre, or early synthesised pianos, but they do stand up quite well on their own. There are some basic controls, such as a switchable decay/sustain envelope, with the ability to control both the attack and decay/release phases via pots.

The main concept for this section is to add further colour to the festival of strings or vocoding that will come later, and in doing so you can choose whether to entirely layer these sounds over the strings, or create upper and/or lower split points. So if you want to bolster your bass, the creation of a low-end split point will nicely do the trick, and the offered sonic palette is perfect for the task. There’s also a great Tremolo function, which adds some nice movement across the stereo spectrum, which is particularly useful when in Layer mode. 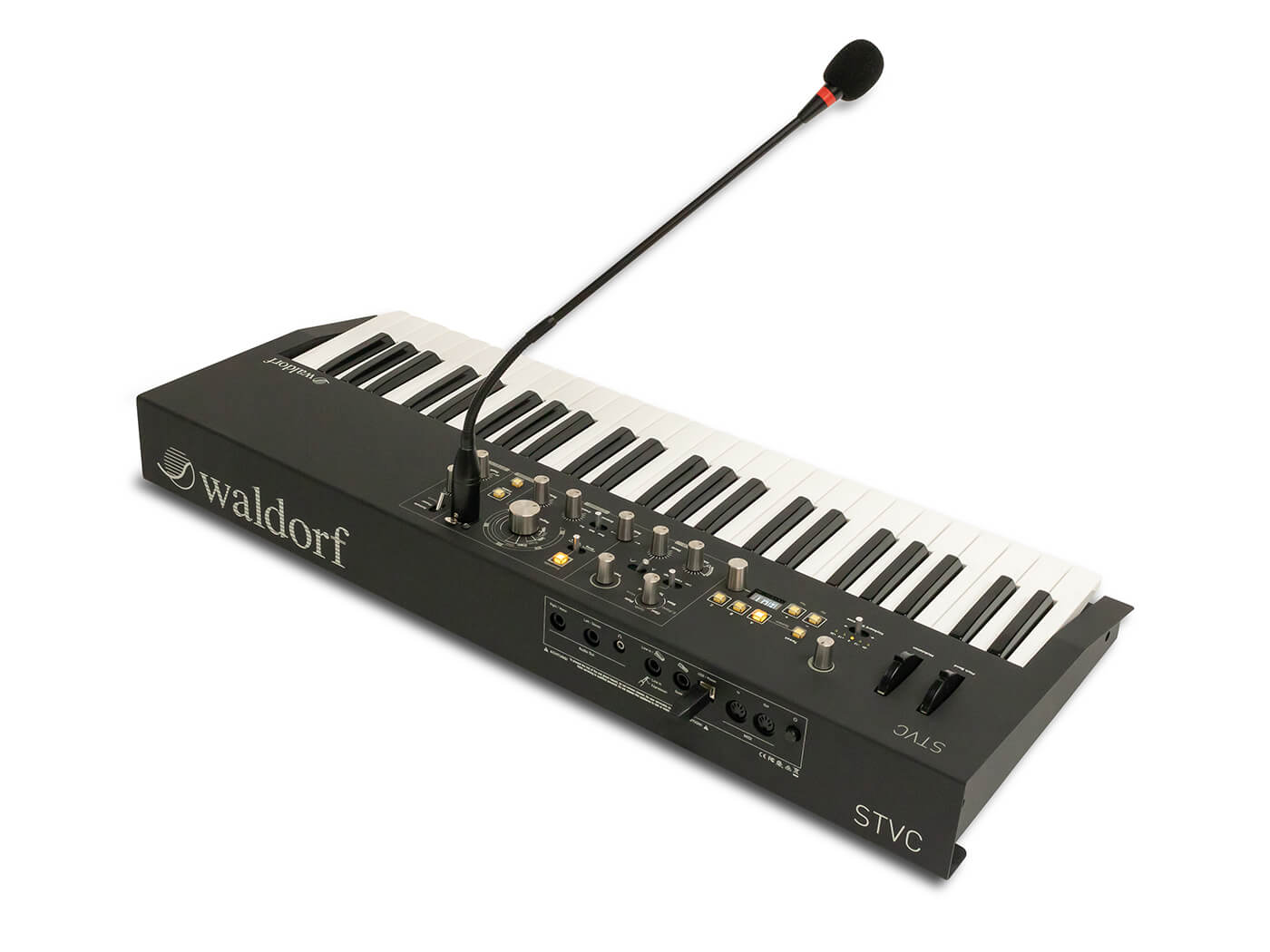 And so to the main event, which is the section located to the right of the main panel, where the string machine and vocoder are located. As a point of clarification, it is not possible to exploit both elements simultaneously, with the default being the string machine section. If you want to go immediately to vocoding, it’s a simple case of pressing the Vocoder button and playing/talking, but more on that later.

The string section is largely the same as the technology previously seen on Waldorf’s Streichfett module, although for my money, the timbre selection is slightly clearer on the STVC thanks to a slight change in the legend. A large rotary pot labelled Registration sweeps seamlessly from one string sound to the next, and while – according to the legend – there are only six registration settings, the sweeping nature of the selection means that there is a considerable choice. In their purest form, it’s worth stating that string machine sounds don’t sound anything like acoustic strings, but that’s not the point. The pungent nature of the pure synthetic tone source is ripe for treatment from the onboard Ensemble section, creating layers of chorus and modulation FX that bring forth that Solina reminiscence.

Sweeping through the available string tone sources, there is a both a radical change in tonal colour and octave, with the choir section providing varying degrees of vocal-throatiness through vowel performance, but in electronic form.

At the extreme right of the panel are three effects, one of which is described as animate; this has the effect of providing automated movement of the registration pot, but with control of depth and speed, so working with one of the vowel-esque sounds will allow for that wonderful sense of a machine talking.

It’s highly likely that the Ensemble effects will always be applied, and in doing so, a liberal wash of Ensemble effect or Chorusing will be applied, completely transforming the tone source to a radical degree. With all of the tonal colours available, both at source and with ensemble FX, it adds up to a sizeable arsenal of string sounds. There is also an option for playing an upper or lower octave, or combining the two for an even thicker texture.

In common with the Solo section, there is a basic AR envelope. With a nice nod to the classics, the attack phase is described as Crescendo, but the fact remains that both phases are can be generously long. If you require more bite in your patch, this is where you can blend in the Solo section, as a layered or split timbre, instigated via a simple see-saw balance pot. 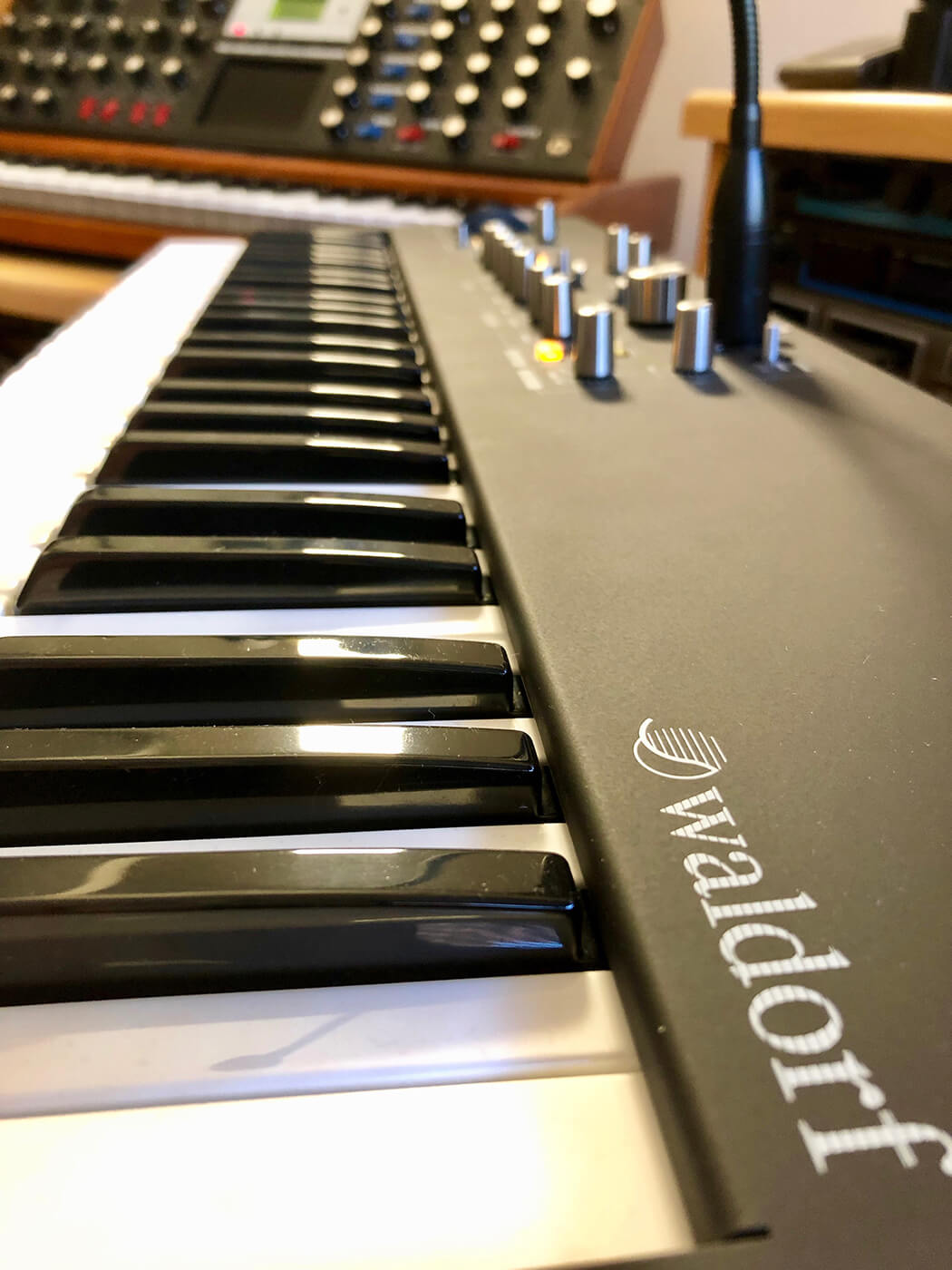 Entering Vocoder mode disables the string machine, in favour of the ability to play while speaking or singing into the mic. The registration pot is immediately reassigned to selection of carrier waves for the vocoder. For those not familiar with vocoders, this could be considered the synthetic backbone to your vocoder sound, while any spoken delivery, via the mic, will provide the modulation and formant qualities.

There’s a considerable choice of carrier, with everything from square waves to typically synthetic Waldorf wavetable-like vowels, with an included section of jittery noise that will keep the Dalek brigade very happy. Should none of the included carrier waves take your fancy, it’s also possible to input external synth sounds via an input point on the rear panel.

The included mic is responsive, and being gooseneck in form it helps keep neck craning at bay, although I would be tempted to replace it with a headset mic if vocoding is going to be a regular event. What’s fantastic about the vocoder section is that it shares commonality with the classics, but thanks to the plethora of Waldorf-sharp waveforms, can also sound very contemporary. It’s responsive when played, allowing for quick runs and funky phrases with great aplomb, alongside the more classic pad-style ambient vocoding from yesteryear. The vocoder is endearingly sharp, bright and characterful, making it perfect for popping straight into a mix and sitting proud. Experimenting with my Moog Voyager as an external carrier clarifies exactly how good the internal vocoder circuitry is, as the registration acts as a form of EQ in this setting. It’s a very classy bit of electronics, which sounds very special. 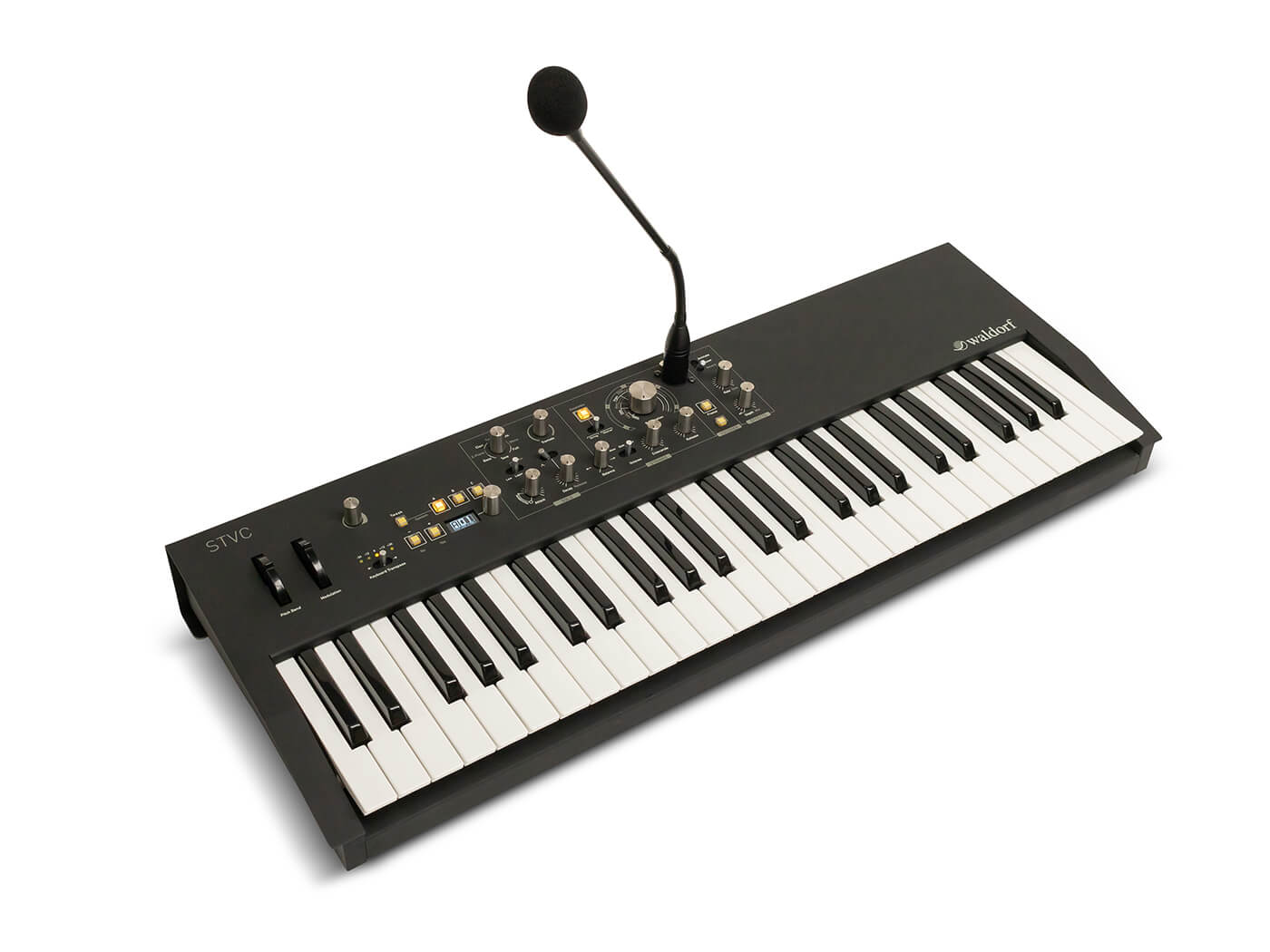 Initially, I was a little disappointed at the lack of choir sounds, often associated with Roland vocoders, but I needn’t have worried. Thanks to a Freeze function, it’s possible to capture several seconds of mic-inputted signal, and simply singing an ‘Ahh’ and freezing it gave an immense facsimile of the classic electronic choral sound. Moreover, this can be stored within the numerous patch capacity for later recall.

Given the nature of the STVC, there might be a perception that it will only appeal to musicians wanting to hark back to a bygone age of electronic music. I think this would be an enormous mistake, specifically because it is so versatile. It’ll handle all the classic vintage string sounds with utter ease, and that could be enough to sell it, but the vocoder section is very capable and very classy, and while vocoders are not always in high demand, it cuts a mighty swagger in both the classic and contemporary camps. The additional layering of the Solo section, coupled with backend effects which include great sound phasing and reverberation, make this a powerful and highly playable package, with one foot in the past, but firmly built for the future. 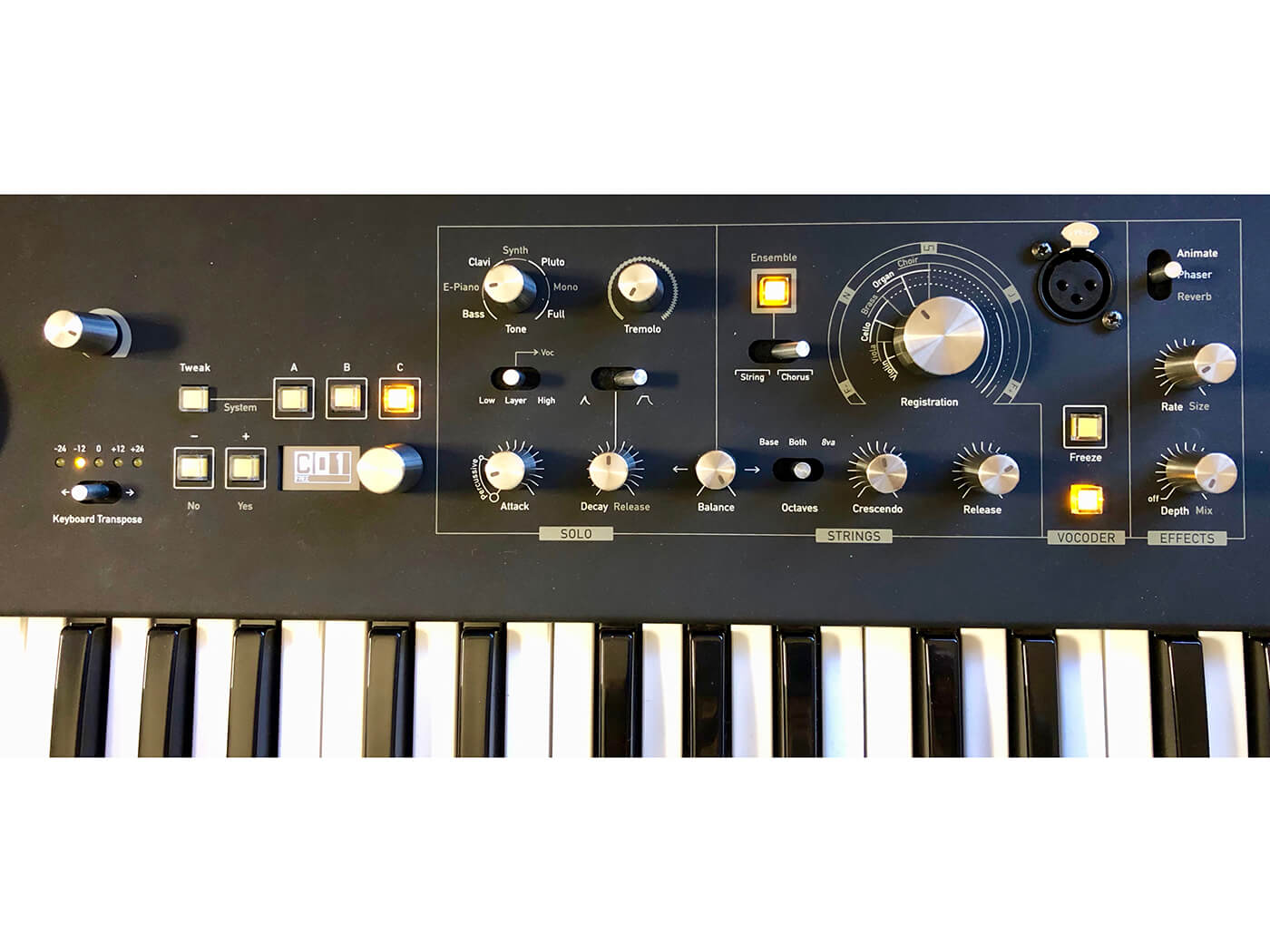 String machines have undergone something of a renaissance over the last 20 years or so, thanks to their prominent use by some very influential artists and bands. On this level alone, ownership of a STVC could be considered enticing, especially if you want to hark back to that vintage sound. If you then factor in that this particular brand of string machine is very versatile, and worthy of considerable creative possibilities, it looks all the more appealing.

The vocoder section is impressive, and would be an excellent standalone quotient, but added to the excellence of the string machine makes this an even more enticing device to have in your armoury. Despite its descriptive manifesto, it is surprisingly capable of moving away from the obvious, which could provide valuable inspiration for exciting creativity. 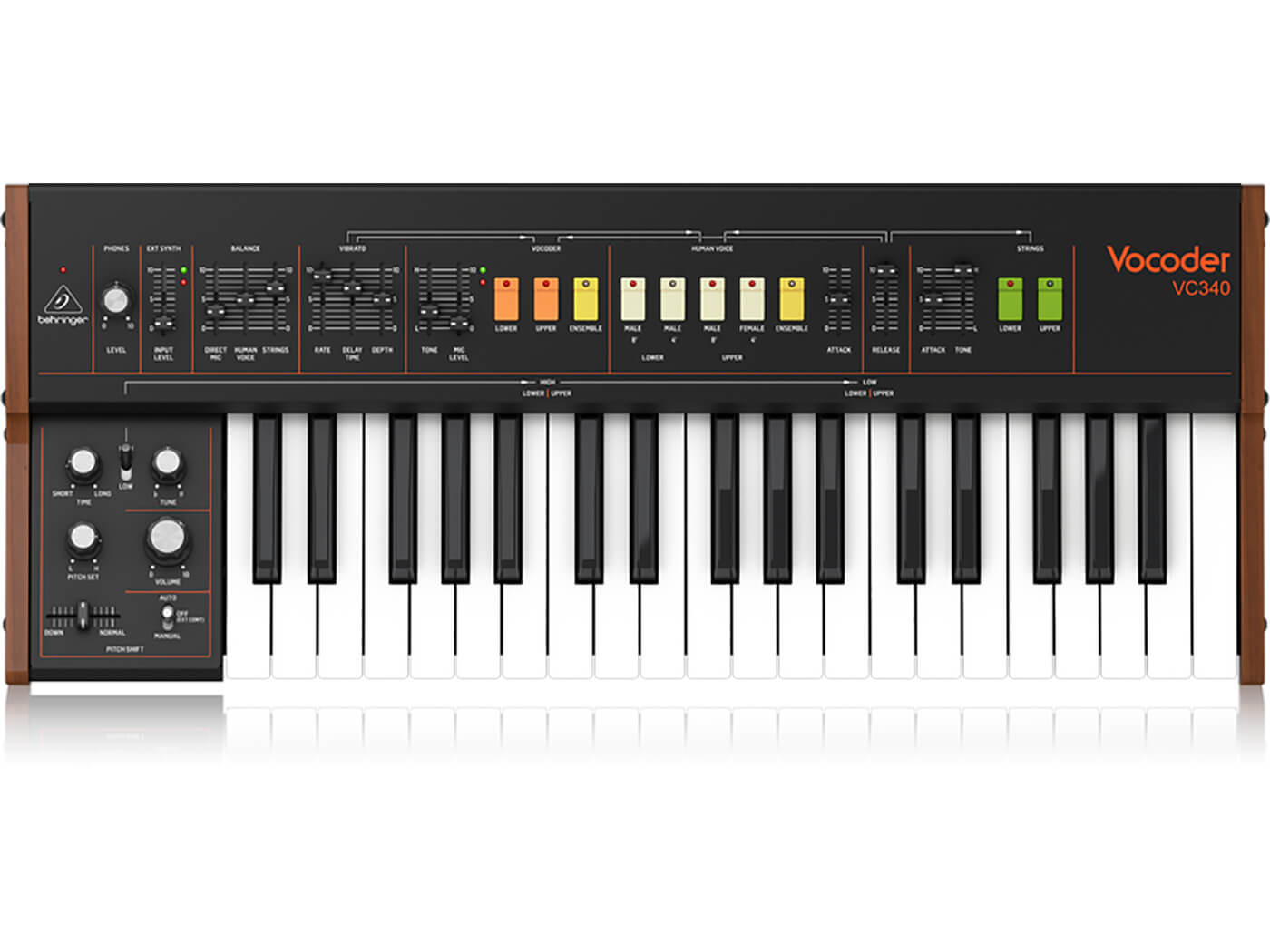 This clone of the original Roland VP-330 is a great facsimile of the original so it does have that vintage vibe. The strings are limited due to the Paraphonic nature of the design, which may be noticed while performing chordal pads. 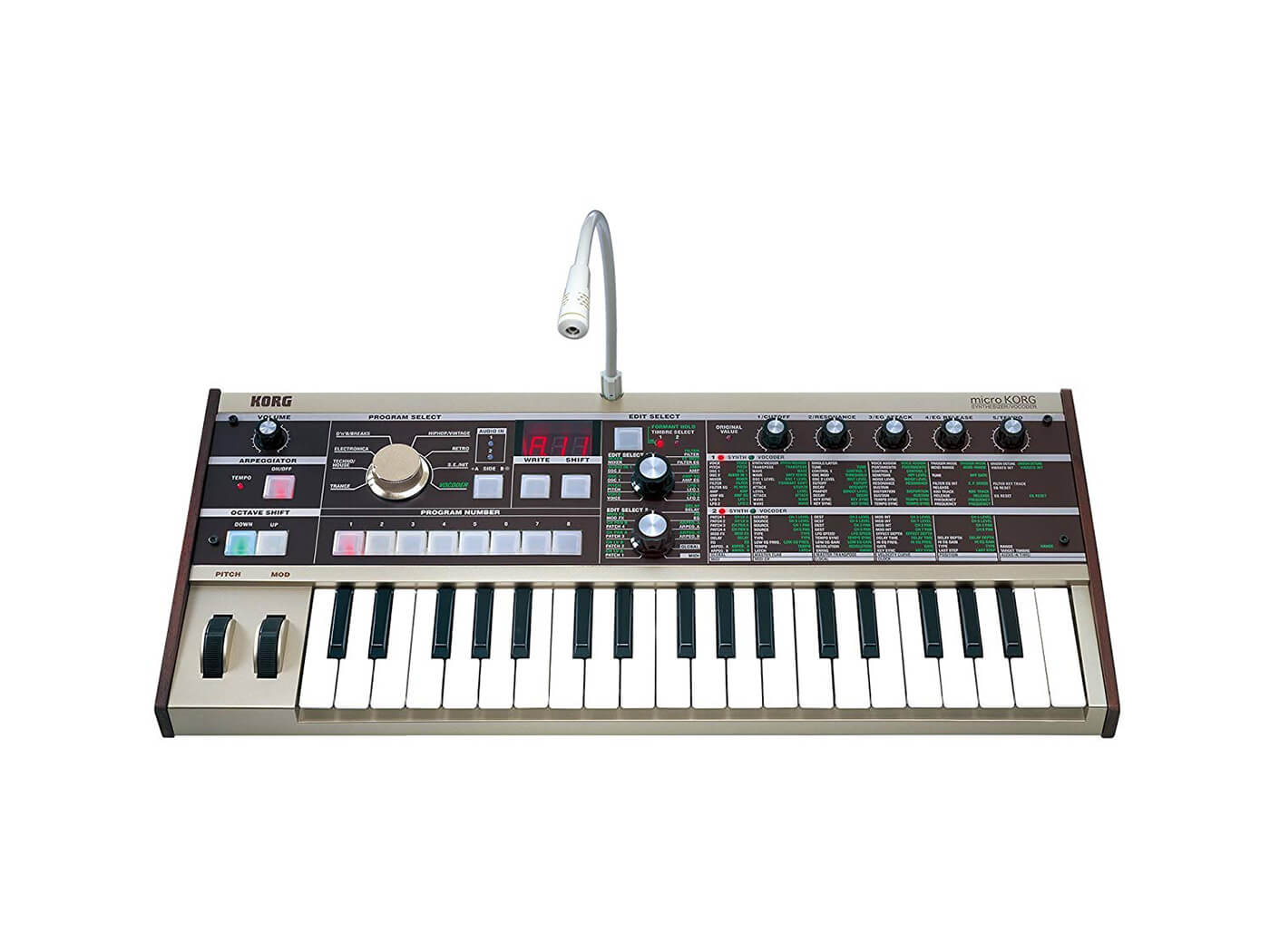 While not strictly a string synth, this does offer a Virtual Analog synth alongside a very useable vocoder and numerous other options. It’s pint-sized and cost effective but does only have mini keys.