A well thought-out, quirky and deep drum machine and synthesiser that transports your productions to the heyday of FM chiptune arcade soundtracks and beyond. 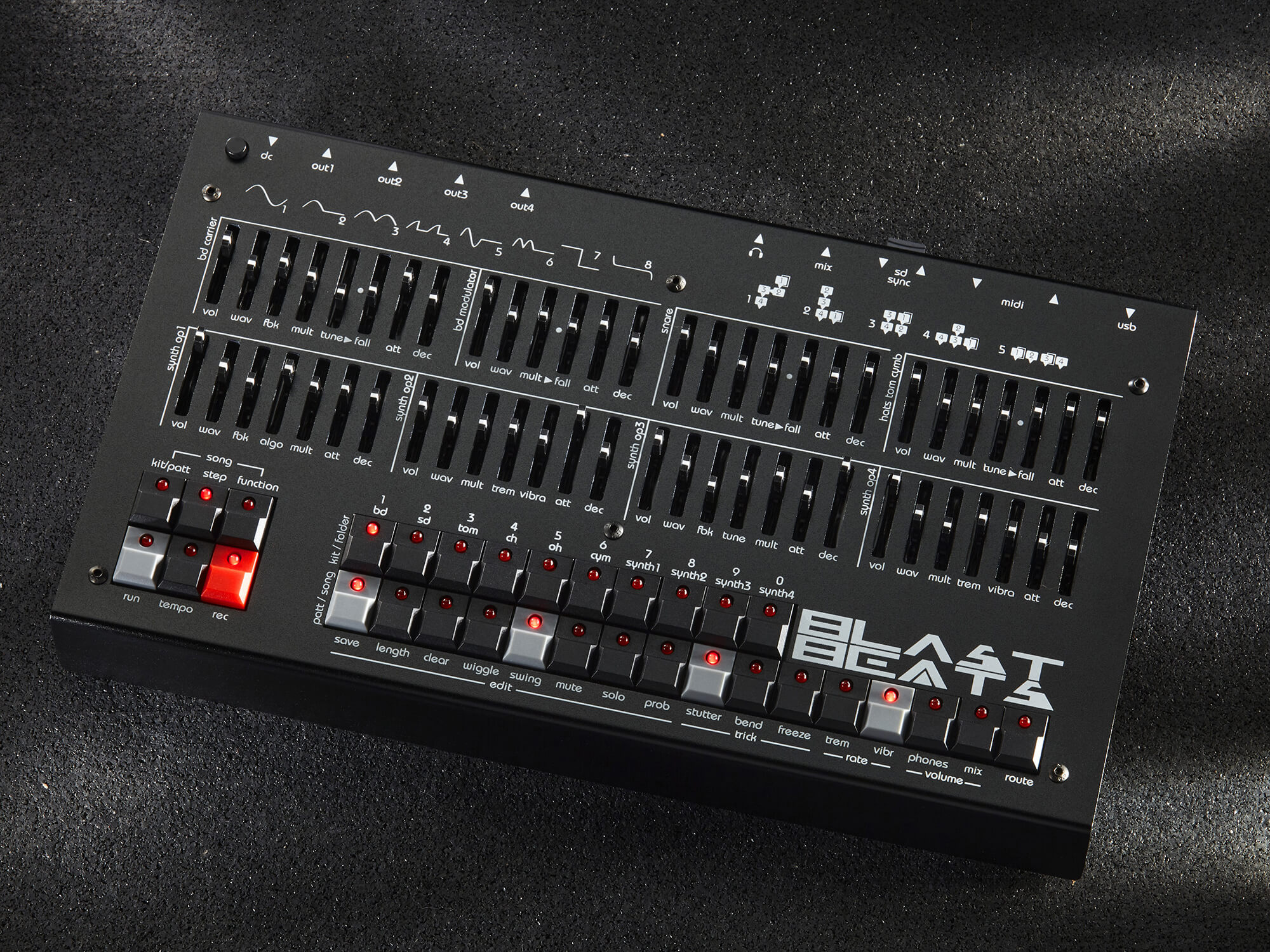 Retro is all the rage. The nostalgia of yesteryear has brought some iconic game-changers back into the spotlight – retro games consoles, music trackers and 8-bit sounds. With a bit of hacking and DIY creativity, Frankenstein-like synth creations have been resurrected from old computers and their sonic creations shared in abundance online. Twisted Electrons has taken this idea several steps further. Its hardware reincarnations have been supercharged into the futuristic workflows of music production.

The latest development from the Twisted Electrons lab is BlastBeats. It’s an FM drum machine and synthesizer groovebox powerhouse with some invaluable and inspirational features under the hood. BlastBeats boasts the best of both worlds with a gritty, unmistakable retro sound fused with modern handling, compact form and sleek looks. If you are tired of pristine-sounding over-produced drums and synths, this device could add just the right amount of edge to your music, far beyond arcade retro sounds.

BlastBeats is a 10-voice groovebox with six drum voices and four synth engines, housed in a modest-sized, sleek black anodised aluminium case with 56 sliders and 32 illuminated switches. You can power the unit via a 9V power supply, making it rather portable. 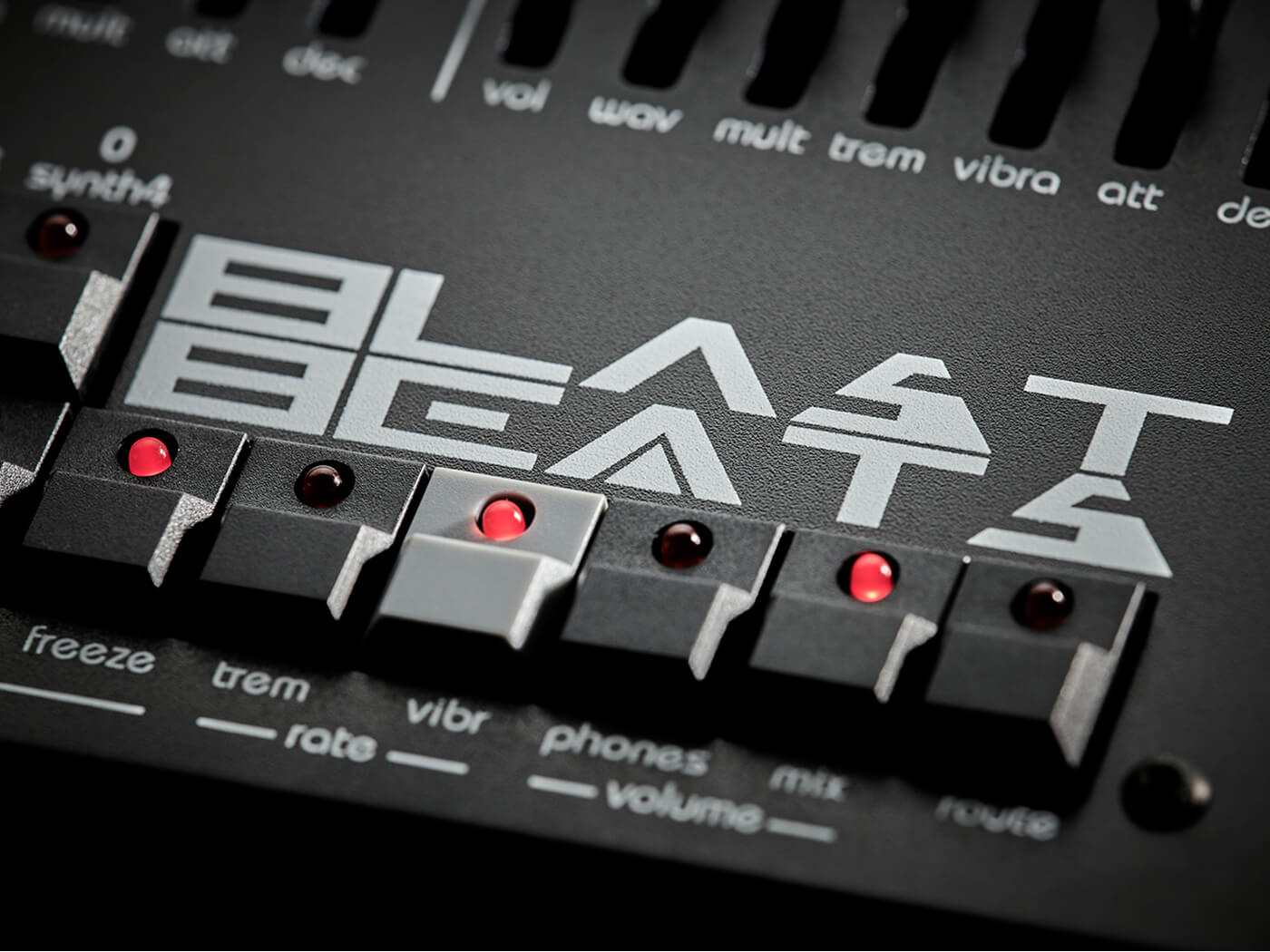 It has a systematic, legible interface but it does feel slightly too cramped for tweaking in a live environment. However, the hardware’s clean design, sturdy sliders and clicky buttons are impressive and a joy to use. At the rear of the device, there are a total of four assignable outputs, a mono mix and dual mono output, MIDI In and Out and a USB port, which unfortunately is only for firmware updates via computer.

The nerve centre of BlastBeats is a vintage FM chip called YMF-262. This sound chip, also known as the OPL3 chip, was previously found in computer sound cards. For the retro aficionados and computer music historians, the most famous use of this chip was in the Sound Blaster Pro 2.0 and 16 sound cards of the early 90s. Simply put it can make funky retro sounds that some of us grew up listening to while gaming back in the day. These chips were difficult to program and were never really used to their full sonic potential. What is fascinating about the BlastBeats is the FM chip synthesises drum sounds use 4 FM operators however, some operators are shared between the different instruments, so some of Blast Beats faders affect several instruments at once. 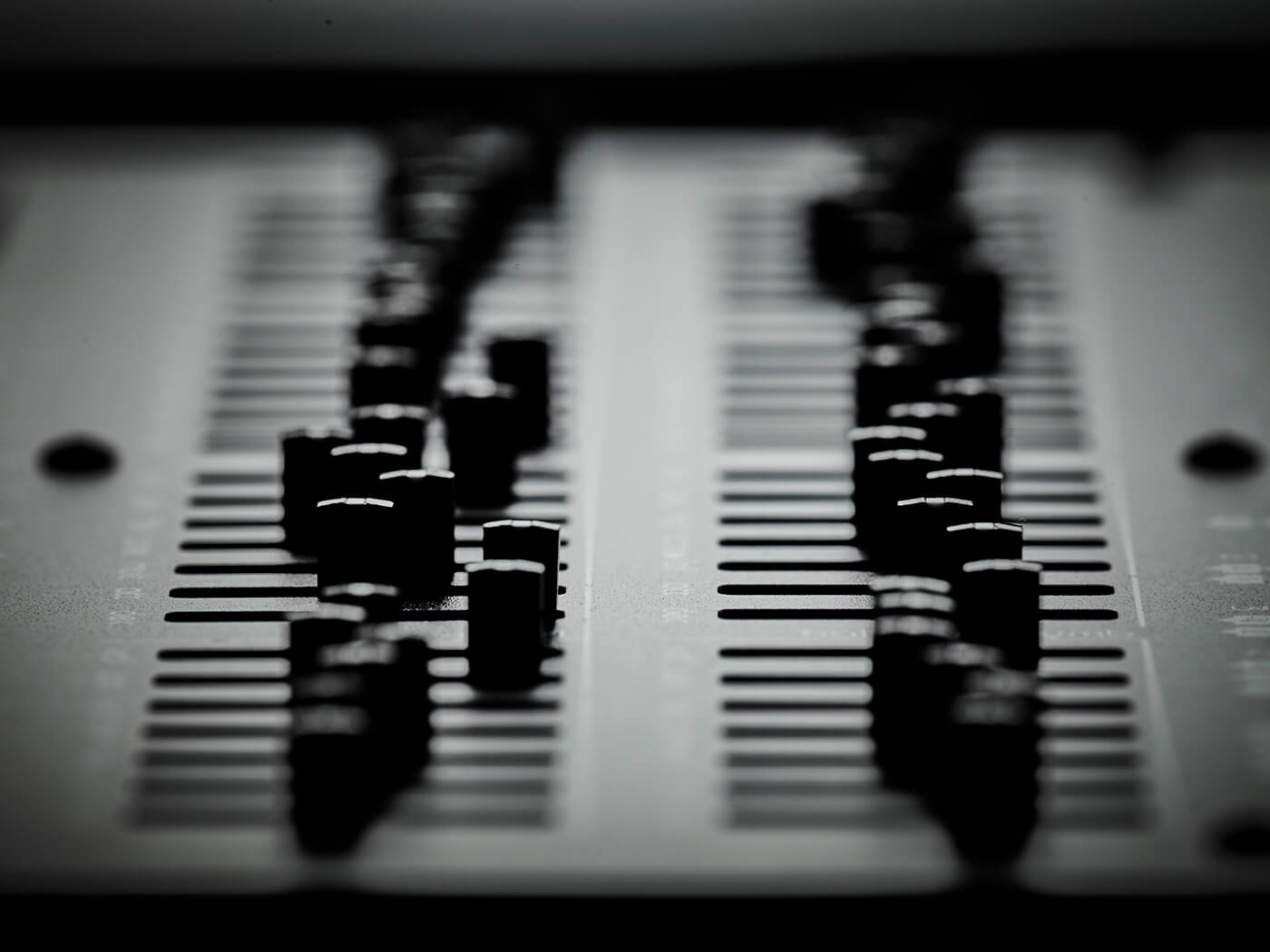 BlastBeats has six monophonic drum tracks crafted from eight possible waveforms and some snappy envelopes to create punchy drums and percussion. An additional under the hood feature even allows the user to change the envelope timing for more experimental drone-like sound creation. Drums can be programmed in X0X style and you can toggle steps on or off simply by pressing the bottom row of 16 buttons. The option for real time drum input via the row of buttons or via MIDI control means that the sequencer can also be bypassed so it can be used as a sound module.

The real secret sauce is the deep level of control available. First off, all sounds, patterns and kits can be cloned. BlastBeats has a very comprehensive array of sequencer features from per step automation, individual step length per track, swing, pattern chaining and, last but not least, the Wiggle mode.

The Wiggle mode sets this machine apart from the competition by adding randomness to any fader. The depth or range of the wiggle can be applied to the current pattern or to all patterns of a song at once. Even the wiggle depth itself can be automated. Now this may sound over the top parameter control nerdery however, this level of control combined with the broad tonality of FM synthesis leads to probably some of the most outlandish fun and sci-fi sonic sound design possible without the need for any complicated menu diving or the use of a computer or external sequencer to provide the automation. If you are familiar with a Swedish company that makes deep sequencer grooveboxes, you will feel like the BlastBeats handling is second nature. It is tempting to say it is even one of the easiest devices to use, since it has discarded the need of a display, convoluted button combos and menu diving. 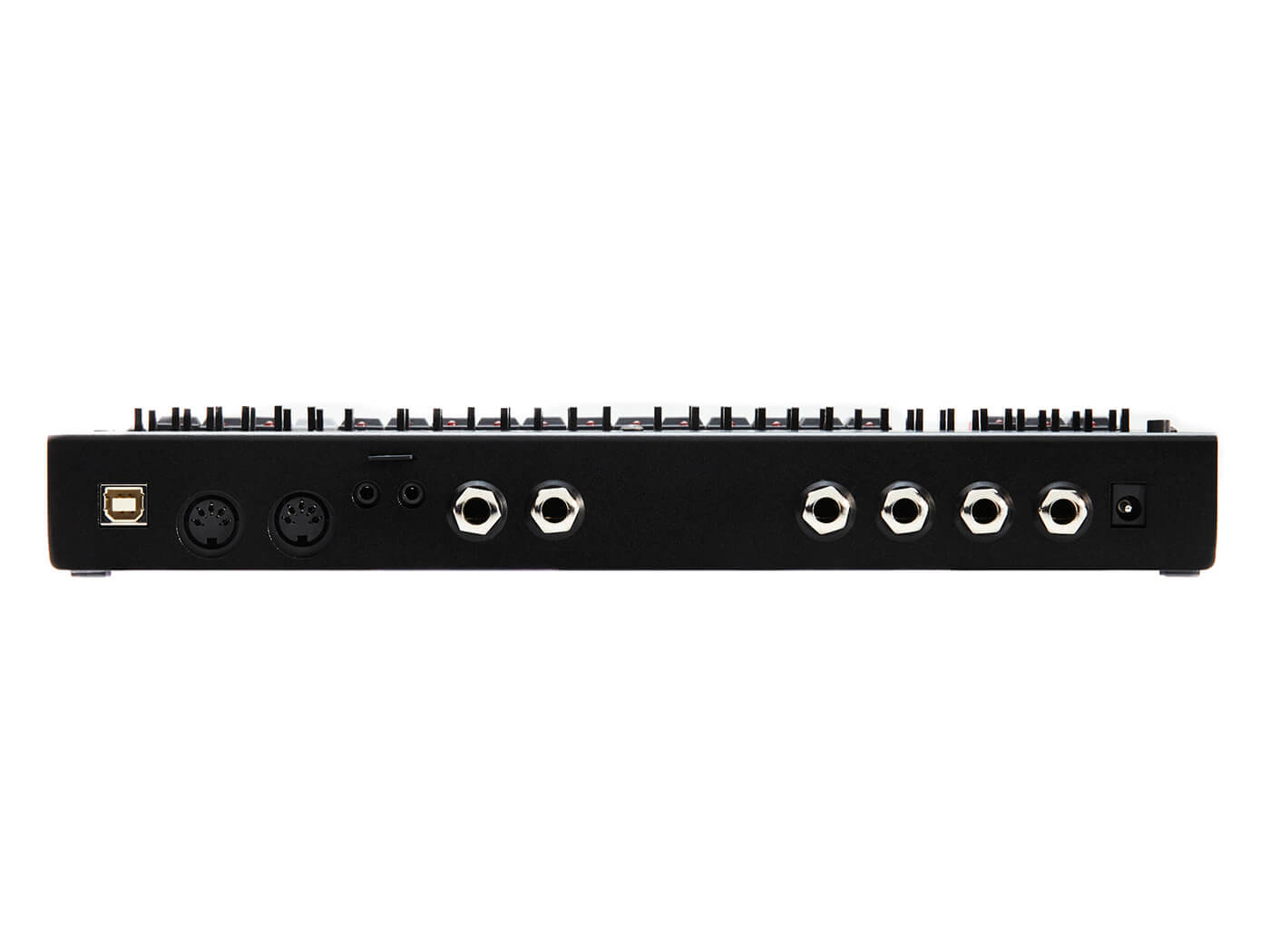 BlastBeats’ name is slightly misleading since there are also the four synth tracks with a total of five FM operator algorithms per track. Synth tracks 1 and 2 are monophonic and synths 3 and 4 are duophonic. Synth track 4 can trigger all four voices, which can be either detuned or triggered to create chord stabs. From eerie pads to dub techno chords to good ol’ fashioned retro zaps, the spectrum of synth sounds is wide enough that it can be used in pretty much any genre of music.

BlastBeats is a wolf in sheep’s retro clothing. This is far more than a nod to the bygone days of demo music, chiptune and rainy weekends playing your favourite arcade games. The sonic DNA is old school and this cannot be avoided.

The sound is unmistakable, regardless of the level of control, and this can be slightly monotonous for some producers. It needs some time to comprehend the mysterious quirkiness of the FM chip but it certainly reaps pleasing rewards. Taking this into consideration, BlastBeats sits well competitively to other groove boxes out there, providing a refreshing take on a familiar style of production tool, where creativity needs to feel and sound intuitive and fun. 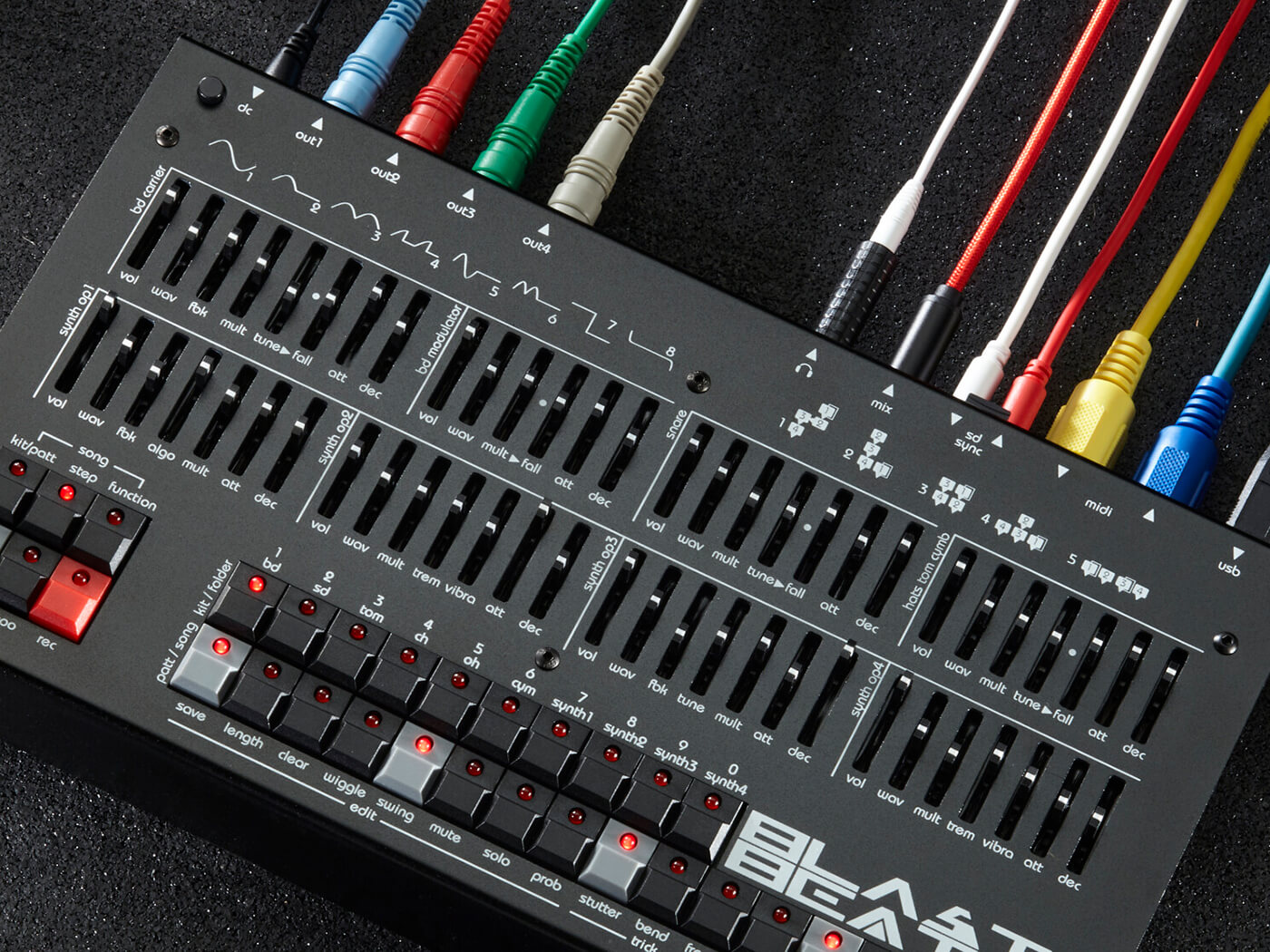