Focusing on refinements, ROLI is betting the Seaboard’s design will stand the test of time. 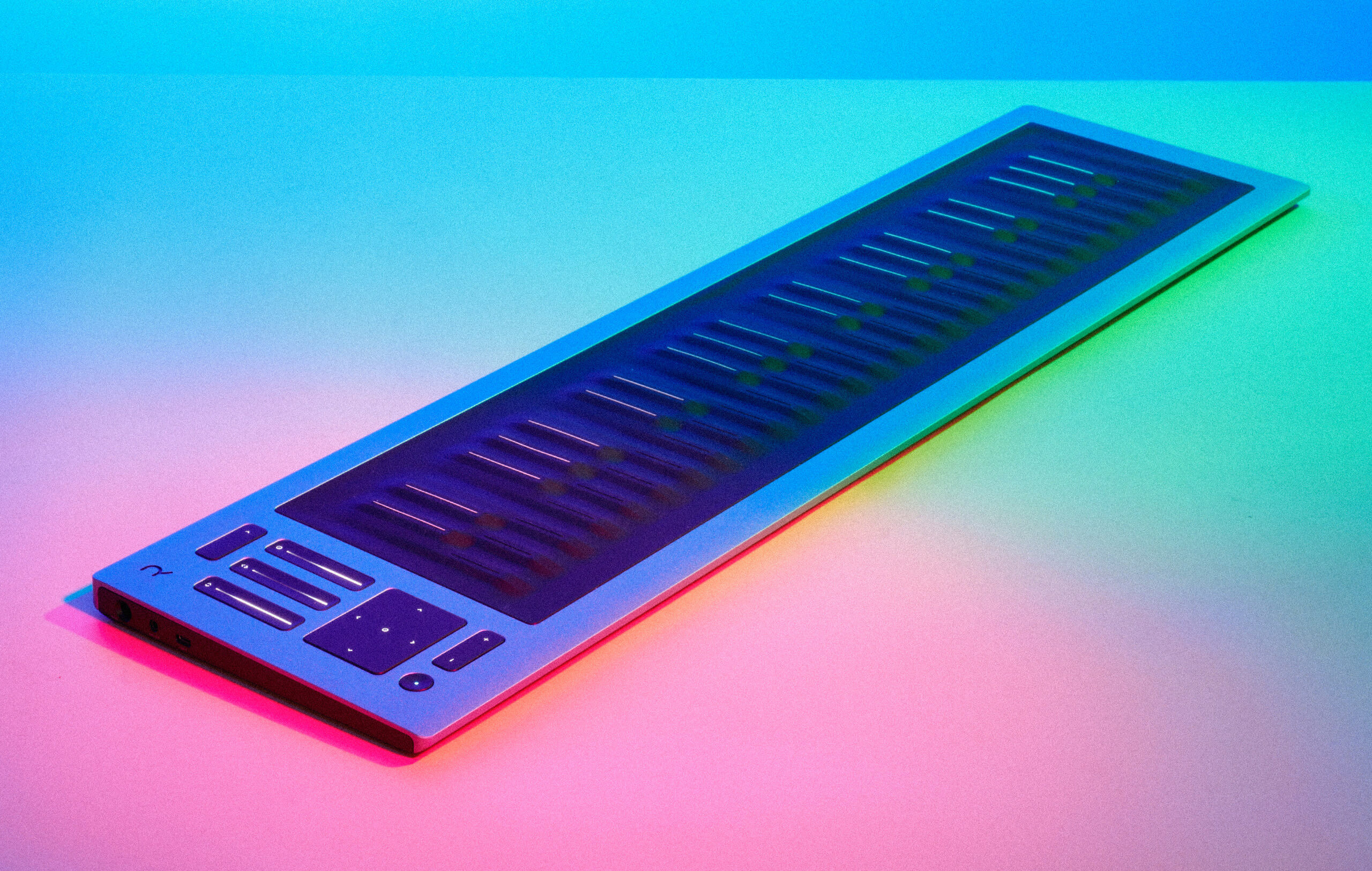 It’s not often the music world gets a genuinely new musical instrument – which is why the arrival of ROLI’s original Seaboard in 2009 generated so much industry attention. In retrospect, the splashy debut was, arguably, premature; MIDI Polyphonic Expression (MPE) was still in its earliest stages of adoption and it took years for the technology to make its way into major DAWs.

But the landscape has changed. ROLI has over a decade of instrument-building experience under its belt, MPE is embedded in the architecture of leading software synths and DAWs, and the majority of consumers have enough processing power at their fingertips to take full advantage of per-note expression.

So, as the company rolls out a new, upgraded Rise 2, the question is: has the world finally caught up with MPE?

The Rise 2 is all about refinement. The core of the instrument remains virtually unchanged from its predecessor but introduces a series of carefully considered tweaks that are unlikely to annoy long-time users or necessitate changes to playing style.

ROLI’s instrument retains the series’ visually gorgeous, minimalist aesthetic but upgrades the body material to anodised aluminium, giving it a truly sturdy and decidedly premium feel. Rather than the black-on-black style of previous models, there’s a burnished blue metal finish that raises the instrument’s profile ever so slightly – though we’re still miles away from the vibrant multi-coloured LEDs of many MIDI hardware devices.

The Rise 2’s layout also remains consistent with previous iterations, featuring an XY pad, touch faders, and control buttons to the left of the playing surface. The I/O ports have thankfully been upgraded and the Rise 2 opts for a unified USB-C for both power supply and data connection, alongside a pedal input, and a 3.5mm MIDI port should you want to connect a hardware synth that can handle incoming MIDI. For wireless playing, there’s also MIDI over Bluetooth connectivity and an internal battery that will get you a pleasing eight hours of playtime on three hours of charge.

The major feature that jumps out as truly new is the playing surface, dubbed Keywave 2. Where once there was a seamless series of silicon hills and valleys, the Keywave 2 now features what the company calls ‘precision frets’ that run vertically up each key. Small though this seems, it’s a change driven by community feedback and the company’s extensive research into performance practice.

Being able to hit a correct note without needing to constantly look at your fingers is a crucial part of mastering any instrument. The previous Keywave surface received justified criticism for being harder to play than a traditional keyboard, especially when performing fast, virtuoso passages. ROLI has addressed this issue with the Rise 2’s new frets and, additionally, each key has been subtly broadened and given ‘articulated shoulders’ to help orientate a player’s fingers.

In practice, the Keywave2 feels like a notable improvement. The frets give a much better sense of where your fingers are before you press down and where the central pitch is for each note – though we’d be surprised if many even notice the slightly tweaked shape and dimensions of each key. That said, keyboard players of an average skill level will likely need to adopt a different and more careful playing style to avoid unwanted pitch fluctuations.

Crucially, these new embossed frets don’t inhibit the slides and bends that the Seaboard line is best known for. In fact, when it’s time to sail your way from pitch to pitch, the Keywave2 surface is awesome, plain and simple. From the smallest of microtonal bends to theremin-smooth glissandos stretching multiple octaves, the Rise 2 feels remarkably responsive and rewarding to play.

Of course, all the pressing, wiggling, and sliding in the world wouldn’t matter without MPE: a supercharged approach to MIDI that gives each individual note a full suite of control messages. In ROLI’s terminology, these control messages are labelled as Strike, Press, Glide, Slide, and Lift – this translates to note-on velocity, aftertouch, pitch bend, modulation, and note-off velocity. Hold down a simple chord and the Rise 2 will capture a wealth of data from each finger and, provided your software supports MPE, will translate it into what is unarguably a more expressive, nuanced, and musical sound.

Until recently, the issue of compatibility was one of the chief bottlenecks holding back MPE. Software that could take full advantage of the technology was few and far between and to remedy this, ROLI released Equator, the first software instrument purpose-built for MPE performances. Happily, there are now many more MPE options for users to choose from. However, ROLI’s flagship synth arguably still remains the gold standard – luckily, it’s bundled in with the Rise 2 for free.

Usually retailing for £199, Equator 2 is a serious synth in its own right – but paired with a Seaboard it becomes truly formidable, and is a perfect vehicle to showcase just what MPE is all about. Every touch and gesture on the Rise 2 will produce modulations of sound that are so fluid and organic, it’s hard not to get caught up simply running your hands over the keys and listening to the ear candy that Equator 2 spits out. Add in over 1,400 presets, roughly half of which are specifically designed for MPE, and you get a largely plug-and-play experience – no small achievement considering this is an undeniably advanced software-hardware combo.

Equator 2’s intuitive layout and logical routing system help with this and when it does come time to tweak and customise, there is plenty for power users to get their teeth into. It’s surprisingly straightforward to re-assign the Rise 2’s five expression layers via the central modulation panel and doing so opens up huge potential for sound design and exploration. What once may have required time-consuming automation can now be captured in a single live performance – provided you have the necessary performance skills – and this is bound to be of interest to producers and composers looking to streamline their workflow.

Alongside Equator 2, ROLI has also included the very capable ROLI Studio Production Suite, a copy of Ableton Live Lite, and a revamped ROLI Dashboard app should you wish to dig deep into the Rise 2’s inner workings. All told, the Rise 2 comes with a pretty comprehensive set of tools to get you started.

Updating an instrument is no small feat. Performers spend countless hours perfecting their playing technique and even the smallest change to proportions or layout leads to a frustrating process of re-learning. It’s easy to look at the Rise 2 and feel underwhelmed at the lack of new bells and whistles. But, in truth, we commend ROLI for the care it’s taken to enhance and build upon its flagship instrument without disrupting existing users.

The Rise 2 is the best iteration of the Seaboard yet: a singular instrument that’s fun to play, looks amazing, and sets the bar for expressive MIDI instruments. More than that, it arrives in a music production landscape that finally seems to be ready for it.

However, being a singular instrument cuts both ways – ROLI has taken steps to improve playability and to streamline the user experience, but to get real musical value out of the Rise 2 still requires a significant commitment to learn and master a new playing style. It’s been said before but it’s worth repeating – a Seaboard is not a replacement for a standard MIDI keyboard; it’s something else entirely, and you’ll want to make sure it’s right for you before investing.

The Seaboard Rise 2 may never be mainstream in the way a keyboard or a guitar is, but this instrument occupies a glorious niche. If you’ve previously been tempted, now is the time to make the leap.