Can this effects-filled, all-in-one song-builder strike the perfect balance between immediacy and editing depth via Roland’s software products? 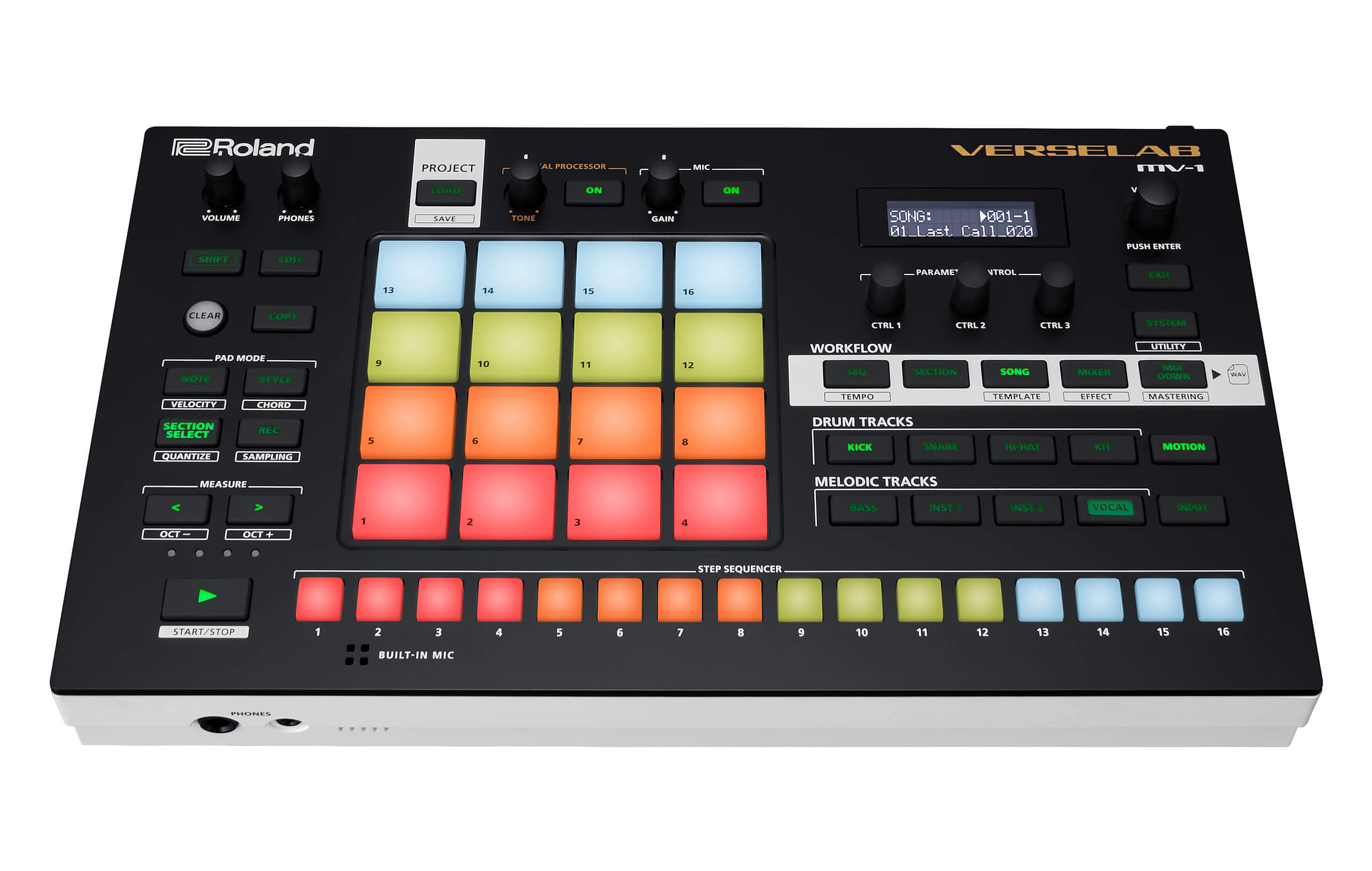 There have been significant changes in the world of music-making in the last 20 years, with the DAW-based approach running alongside a resurgent interest in hardware. While Korg has produced modern analogue replicas of its legacy instruments, Roland has embraced DSP to recreate its classics. And it’s done this alongside developing an ever-growing virtual-instrument and soundware library covered by their Roland Cloud subscription service.

For review, we have the Verselab MV-1, which incorporates Roland’s latest developments, integrating analogue-circuit-modelled hardware with Roland Cloud services and the Zenbeats app.

The Verselab MV-1 takes its design cues from the AIRA range; black and green dominate, but with other colours to aid beat, pattern and song creation.

Although the MV-1 is constructed from plastic, it feels sturdy and has a decent feel to its many knobs and encoders. The front panel is dominated by the 4×4 drum pad matrix, with a 16-step TR-style step sequence grid below. These are the primary means of playing, recording and arranging your compositions. To the right are buttons for accessing the eight main tracks – four for drums, then bass, two instruments and a dedicated vocal track. This naming belies the MV-1 true capability, as the instrument tracks can also host drum kits and audio loops, and drum tracks could play melodic instruments. 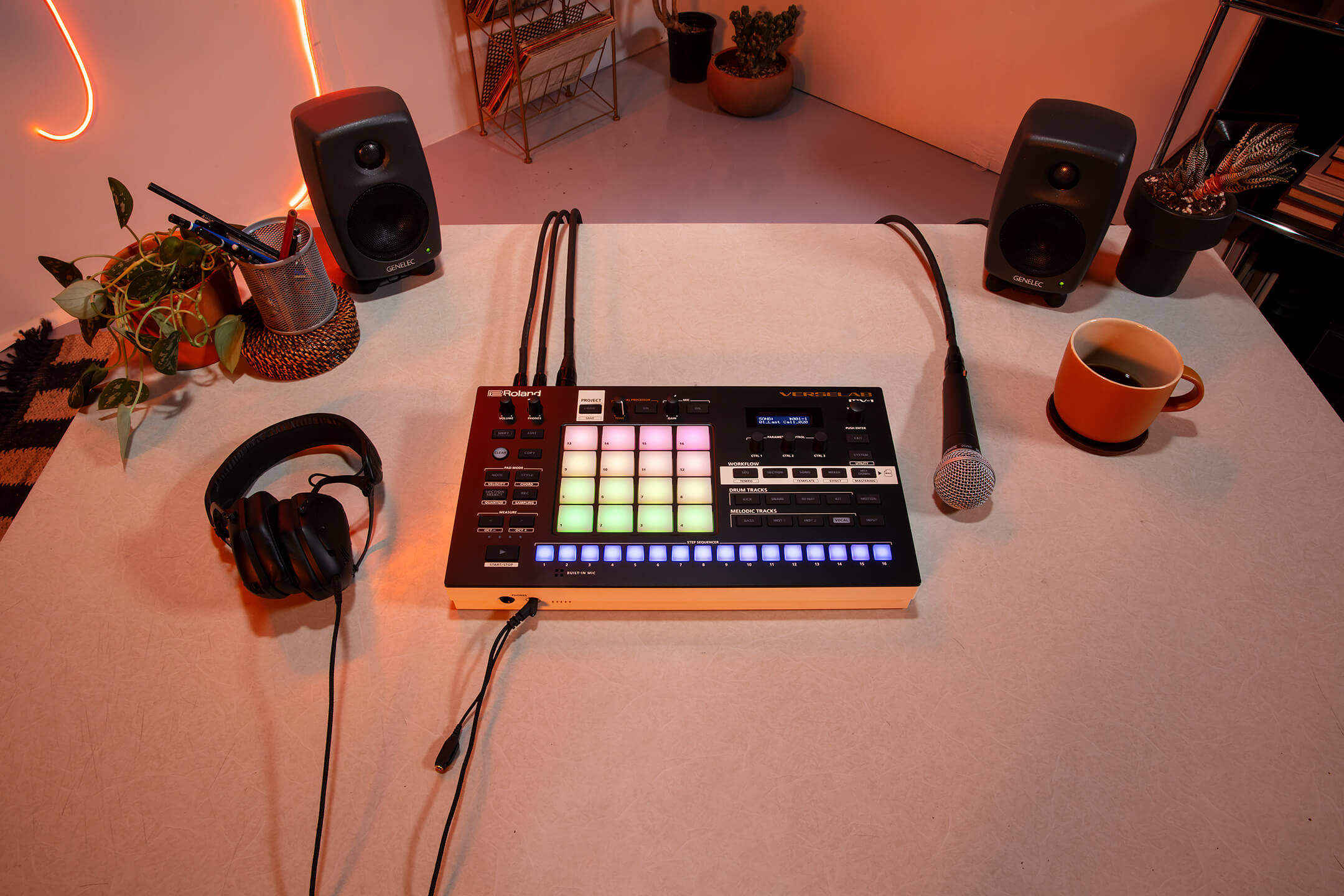 On each track, you have access to an extensive built-in sound library, though you may also load your own samples. The sounds make use of Roland’s ZEN-Core engine, which includes both sample and virtual-analogue elements alongside insert and send effects sections. Its four partial/oscillator-per-note approach harks back to the JV series and beyond, but the sounds are strong, and there are over 3000 to choose from.

Above the tracks, there is the so-called workflow area, and this gives a good sense of how you might approach creating music on the device. You start by creating individual Sequences (Clips in Roland parlance), group them into Sections, and then arrange these into a Song. The mixer button provides access to mix and effects parameters before moving to Mix Down, where everything comes together (via a master processing chain) to create a final WAV file. Everything on the MV-1 is stored on an SD card on the rear of the unit.

The Vocal track is different from all the others in terms of recording and playback, and anything you add here sits outside of the Clip/Section workflow, making vocals only accessible in Song mode. You can record or import up to 16 vocal takes and then edit, move or copy them all from the hardware. Helpfully, the vocal section also has its own set of effects, including dynamics, EQ, pitch-shifting and harmonisation (which you can enable while recording if required). For (very) rough sketching of ideas, there’s even a built-in microphone. 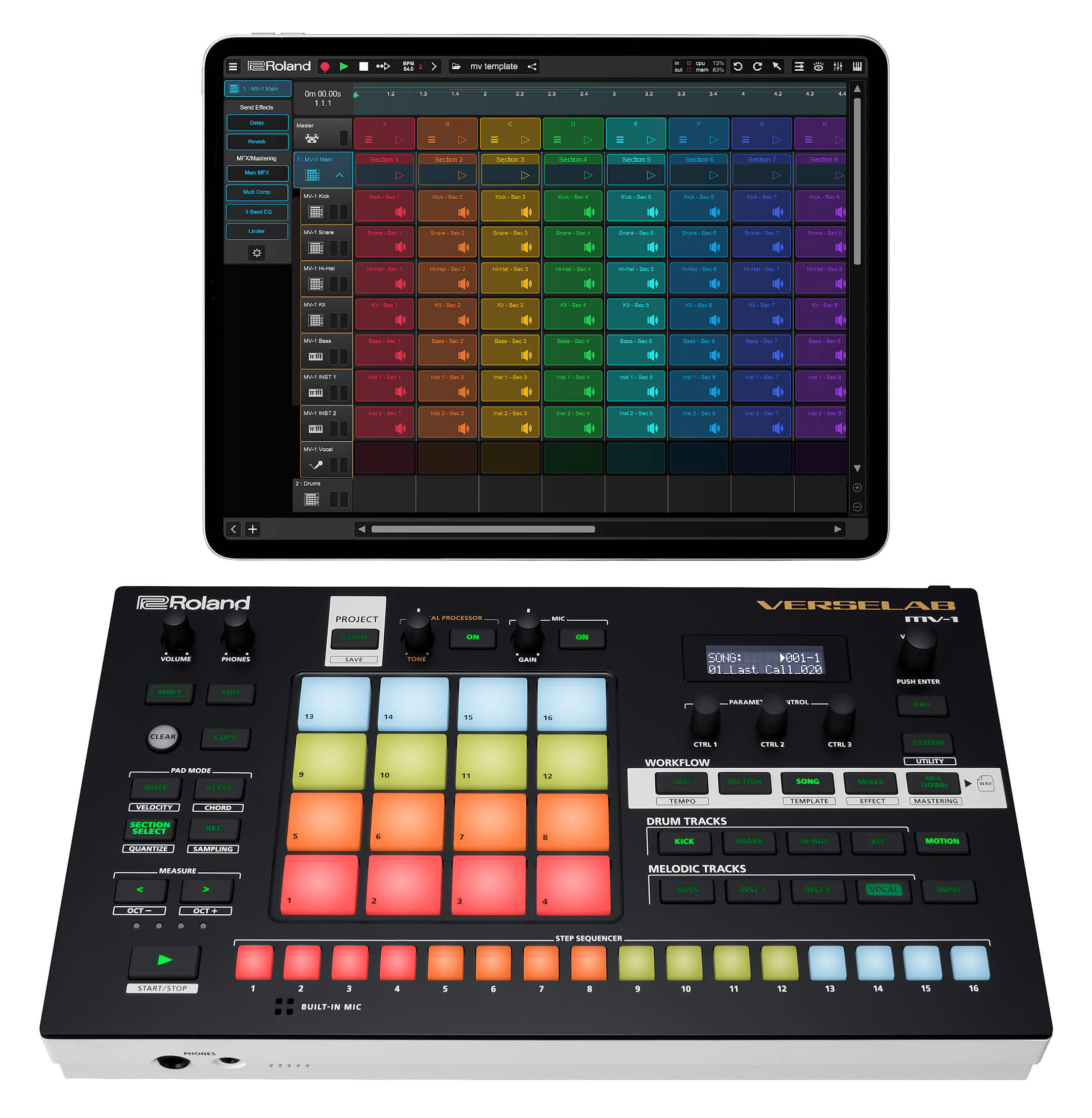 Other controls, including those relating to vocal and mic-based recording, are located around the front panel’s perimeter, with an LCD screen, three Parameter Controls and Value encoder/push switch rounding off the user interface.

Even though the unit has plenty of task-specific buttons, you will have to use the screen to access many functions, and a basic 32-character screen is never going to be the best way to do this. This, and the lack of an undo function, were two of the issues that frustrated most.

In terms of connectivity, the MV-1 offers line level in/out, a mic input (with phantom power), MIDI I/O and a USB port for integration with phones, tablets and computers. Although there is no on-board battery power, mobile use is possible by using a USB power bank. USB also allows the unit to act as an audio interface. Like other recent Roland units, it also allows you to route individual tracks into your DAW (over 10 stereo inputs). After a few configuration issues, this worked well and offers a way to integrate the MV into a DAW workflow without adding the expense of an audio interface. 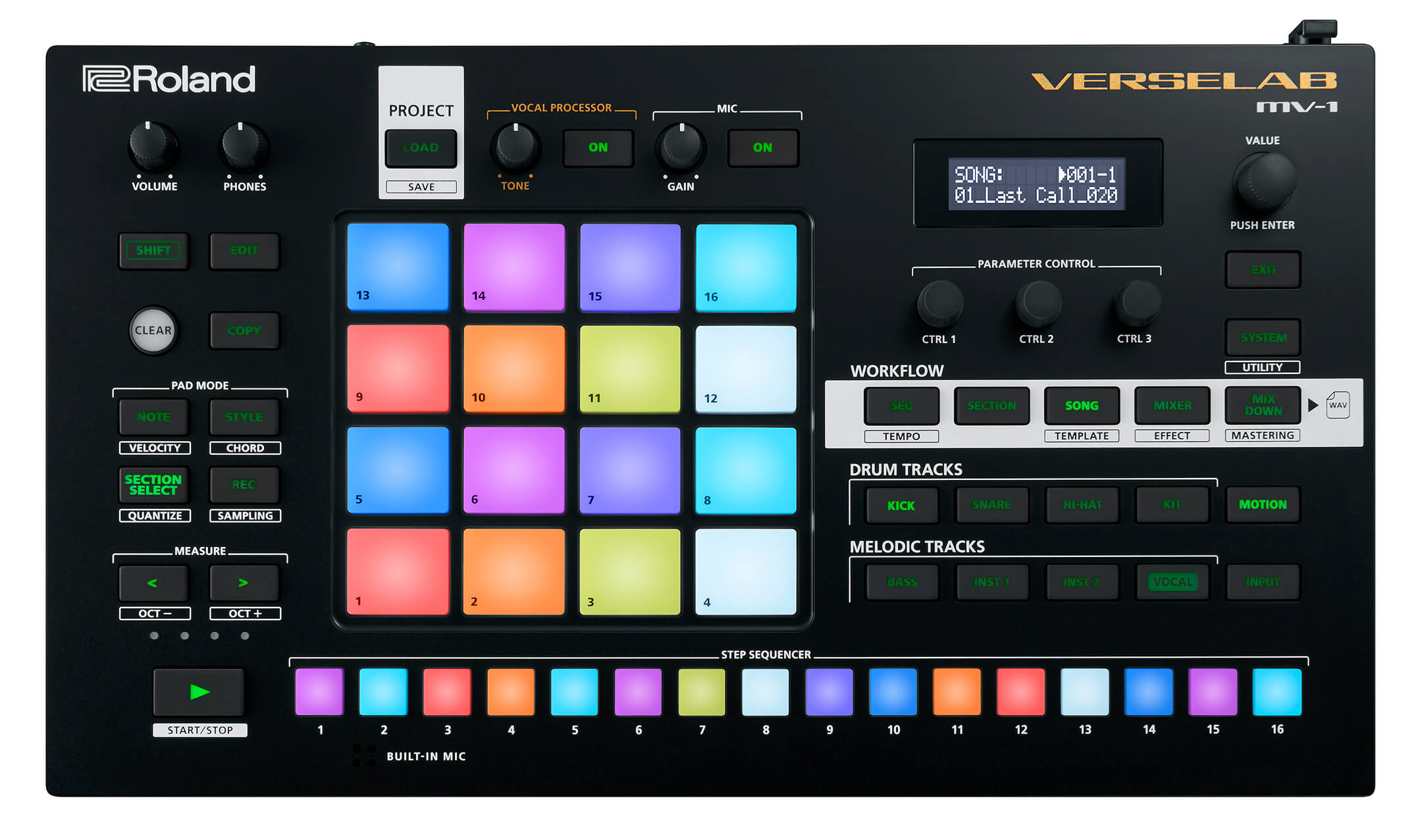 The Verselab MV-1 works best when connected to a computer. Roland’s Zenbeats software makes editing effects and other parameters far less painless than scrolling through multiple windows. However, it doesn’t currently offer a timeline view, making it little help when placing vocals. The editing capabilities for built-in sounds (tones) – which are limited on the MV-1 – can also be expanded using the Zenology plug-in.

There is a lot of power in the Verselab MV-1, and it has the potential for some great results. However, to increase flexibility, it does perhaps compromise immediacy and overall usability. For example, on a single track, each successive Clip could use a different tone or sound engine (and effect). You need to be able to edit and keep track of all of these. It, therefore, brings into focus an issue that plagues many all-in-one boxes such as this: simplicity vs flexibility.

I can’t help but wonder if Roland could have expanded the track count to 16 and allocated specific functions to tracks (drums, melodic instruments, samples, loops, audio recording etc.), and combined this with a bigger and better screen. The MV-1 would then have felt like a better value and more accessible proposition. Still, it does tick many boxes as a DAW alternative, but at nearly £600/$700, it faces some stiff competition from computer and tablet-based systems. Notwithstanding ease-of-use, these also have the bonuses of being both more flexible and scalable. 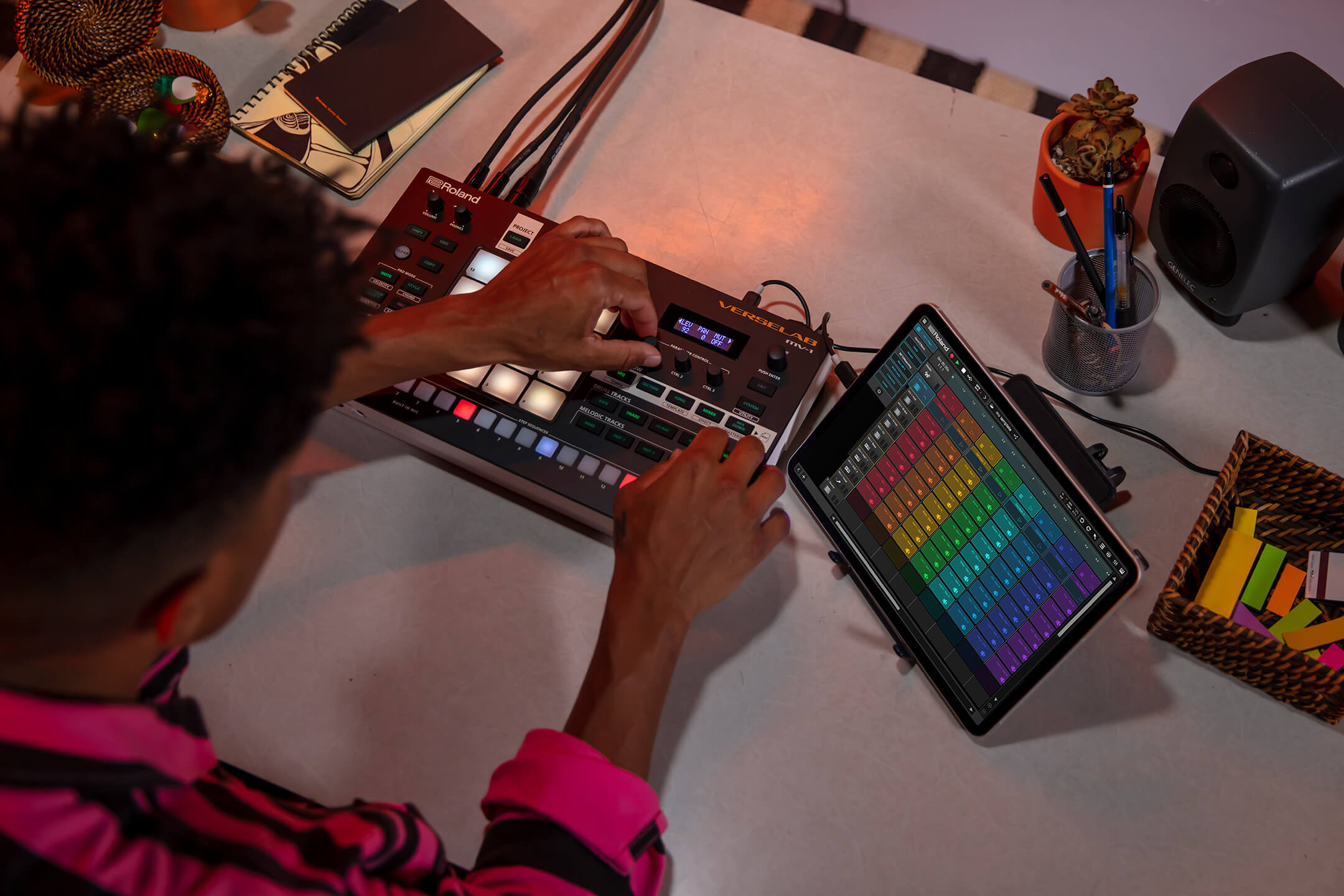