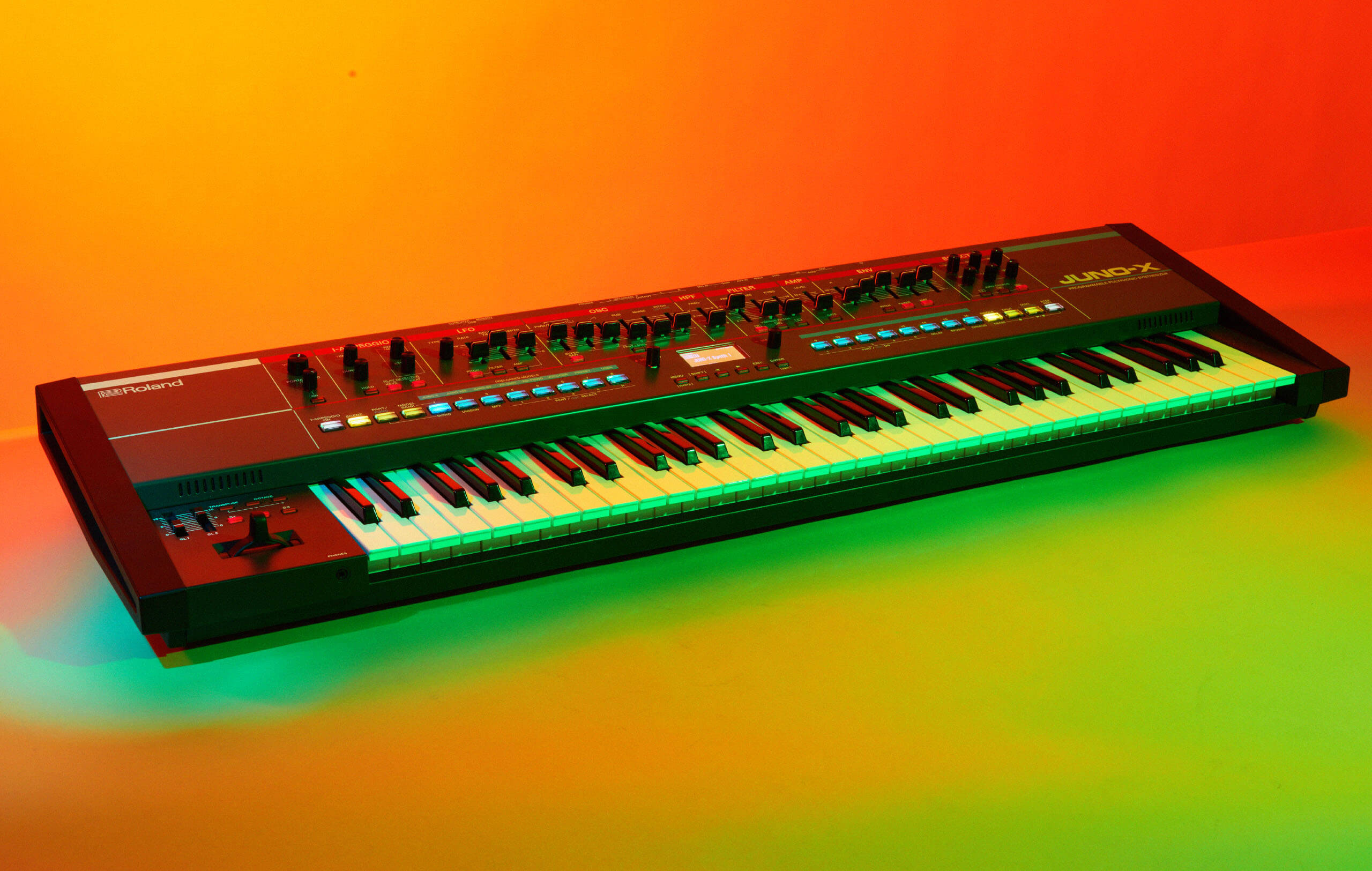 The Big Review: Roland Juno-X is a complex chorus of jaw-dropping sounds

Using Zen-Core tech, this synth puts a host of beloved Roland instruments at your fingertips

Fatboy Slim says everybody needs a Roland TB-303. Roland seems to think everybody needs a Juno. Since 1982, the Japanese company has printed the Juno name on over 15 hardware synths, created a meticulous Juno-106 plug-in emulation for its Roland Cloud platform, and has even made a software effect based on the Juno-60’s chorus. You’ve probably seen the convincing unofficial emulations from the likes of Softube, TAL Software, and Arturia.

Now the revered manufacturer has combined multiple Juno models – plus a few extra instruments – into the Juno-X, a digital polysynth that oozes retro aesthetics and harnesses the power of Roland’s Zen-Core Synthesis System. Fans of the analogue-era Roland Juno synths, however, will bemoan the X’s complexity, as well as its tiny screen and redundant speakers. Let’s get a balanced view.

The original Juno-60 and Juno-106 designs are iconic. The Juno-X has been smartly finished to resemble its forebears, with its many sliders and unmistakable red, blue and grey facade. The only thing this solid plastic newcomer is missing is the old-school wooden side panels – though Roland says they’ll be available soon. Durable and bulky, the Juno-X boasts myriad sound design options that are quickly accessible via the sliders and row of backlit function buttons that hark back to those on the Juno-106.

Roland has included synth models – called Model Expansions – of the Juno-X, Juno-60 and Juno-106. Plus, you get some sounds of the brand’s XV-5080 digital synth and RD piano range. The exclusive Juno-X engine brings modern virtual analogue features such as a super-saw oscillator, a third Juno chorus, pitch envelopes and more. With over 4,000 preset tones, it’s easy to find a patch you love. There’s no doubt you’ll be impressed.

You can also use the Roland Cloud Connect smartphone app, as well as the Juno-X Editor, to download and import synth models – which include the Jupiter-8, JX-8P and SH-101 – to the Juno-X. This is a fantastic way to access a range of classic synths. To do so, however, you’ll need a Roland Cloud subscription or a Lifetime Key, which don’t come cheap.

For deep-diving into parts and scenes, you can use the miniature graphic LCD display or connect the Juno-X to your computer via USB to tweak parameters and build scenes in real time via the Juno-X Editor software.

Does the Juno-X sound like a Juno? With its Analog Behaviour Modelling (ABM), Roland promises a true analogue feel akin to that of the Juno-60 and Juno-106. ABM emulates the physical characteristics of analogue synths, rather than their circuitry, right down to an internal temperature gauge that lets you dictate the tuning and drifting of the synth engine. You can even set the age of the Juno to 100 years old, which accentuates the quirks and imperfections of the synth.

There are three filter types, which can be switched between quickly: a Roland filter, a Moog ladder-style filter, and a Sequential Prophet-style filter. With their different resonance peaks and responses providing increased versatility, each sounds as lush as you’d hope.

The Juno-X’s 61 keys are velocity-sensitive and feature aftertouch, which means you can play the X with more expression than its predecessors. The Juno oscillator section is laid out as you’d expect – a pulse wave with pulse-width modulation, saw wave, sub-oscillator, noise generator, and a pitch slider.

Despite being a digital synth, the Juno-X’s many imperfections keep the analogue magic alive. There may be minute differences between analogue Juno synths and the Juno-X but, if you’re so keen to look for them, the Juno-X probably isn’t for you anyway.

The synth’s bespoke self-titled engine has the flavour of a rich subtractive synth. With its super-saw oscillator, you can make anthemic leads and pads in a flash. The Juno-X follows the same signal flow as the Juno-106, with an added pitch envelope for creating hoovers, lasers and other sci-fi sounds. Unfortunately, you can’t alter the amp envelope and filter envelope independently, which means the filter and amp share a single ADSR envelope.

The Juno-106’s chorus engine let out a loud hissing noise that, with some models at least, made the effect unusable. Fortunately, the level of Juno-X’s chorus noise is for you to dictate, meaning you can eliminate the hiss altogether or leave some in for added character. Along with three beautiful chorus effects, the Juno-X features reverb, delay, and drive. If you need to add more, there’s an abundance of system effects you can deploy.

So far, so promising – but the deeper side of the Juno-X’s workflow isn’t as inspiring as it might seem. Sure, it’s easy enough to tinker with the sliders and sound banks to design patches but the perplexing nature of parts, scenes, the I-Arpeggio system and the TR-style sequencing might stop you in your tracks.

The Juno-X can store 256 scenes. Scenes are patches that comprise up to five parts – for example, four synth sounds and a drum kit. In theory, this is an excellent structure for sound design and pattern generation. In practice, though, it can be confusing as to whether you’re tweaking a part, a tone or an entire scene at any given time.

Parts are made up of tones and your desired effects settings. Tones are the patches you’ve synthesised, whether using the Juno-X engine, the RD piano sounds or an instrument you’ve imported from Roland Cloud. You can save and recall the tone and system effects settings in your parts.

You can flick between parts using the buttons above the keyboard and change a part’s volume using the alternative functions of the oscillator section. You can enable each part using the row of buttons on the left. To choose the synth model for your part, hit the Model Bank button and select from the row of buttons. Bored? Us too.

Fret not. Once you get hands-on with the synth, the system is easier to pick up. We just wish Roland didn’t include so many multi-faceted buttons and sliders. It’d be easier if you could toggle between different states of settings. Instead, it’s a case of activating and editing different sections one at a time.

The Juno-X’s miniature display is a problem too. Compared to the larger touchscreens of competing modern synths and workstations such as the Akai MPC Key, the Juno-X’s small LCD screen is obtuse. It invites a more hands-on approach to synthesis but scrolling via an archaic LCD screen to change settings, view sequences and alter parameters is always cumbersome. It’s fine for glancing at effects values but it’s not fun for deep edits.

The Juno-X Editor picks up some of the slack here, giving you a holistic overview of the synth – although it defeats the point of a standalone synthesizer, as you’ll connect the synth to your computer via USB anyway.

The USB-A connectivity is a handy way to communicate MIDI between your DAW and the Juno-X, should you not want to use the five-pin MIDI connection. On that note, it’s a shame that CV/gate capabilities aren’t included for easy access to modular hardware, which could’ve cemented the Juno-X’s place as a potential studio centrepiece.

I-Arpeggio is Roland’s clever take on an arpeggio. Introduced in 2019 with the Jupiter-Xm, it’s a smart means of creating patterns for entire scenes. It’s fun to use even at its most basic level. Go deeper and the algorithm will generate unique sequences based on your playing. Here you can dive into TR-style sequencing. It’s cool but it’s another convoluted feature with a steep learning curve.

The Juno-X’s two full-range speakers and two tweeters are questionable. They’re better than laptop speakers but aren’t as precise as studio monitors or headphones. According to Roland, they’re designed to be used for personal practice sessions or for getting an extra bit of audio feedback if you’re onstage. But you’re not feeling the full weight of the synth through them; it’s better to just turn them off and use headphones or speakers.

You could argue that the Juno-X is just a glorified hardware wrapper for Roland’s Zen-Core technology. If you have a Jupiter-X or Xm, there’s no need to get the Juno-X unless you’re vying for the exclusive Juno-X engine (you can buy the Juno-106 Model Expansion). Otherwise, it’s a satisfying solution for producers wanting the sound and touch of a Juno. Plus it’s a seriously powerful standalone synth for DAWless jams and live performances.

Second-hand Juno-60 or Juno-106 synths can set you back anywhere between £1,800 to £5,000, per the Reverb listings. At £1,689, the Juno-X can grant you Juno sounds and tactility for a lot less – you could even add a Jupiter-X Model Expansion on top and still be below the asking price of a vintage Juno.

If everybody really needs a Juno, then the Juno-X may well be your ticket to one. We still want a bigger screen though.