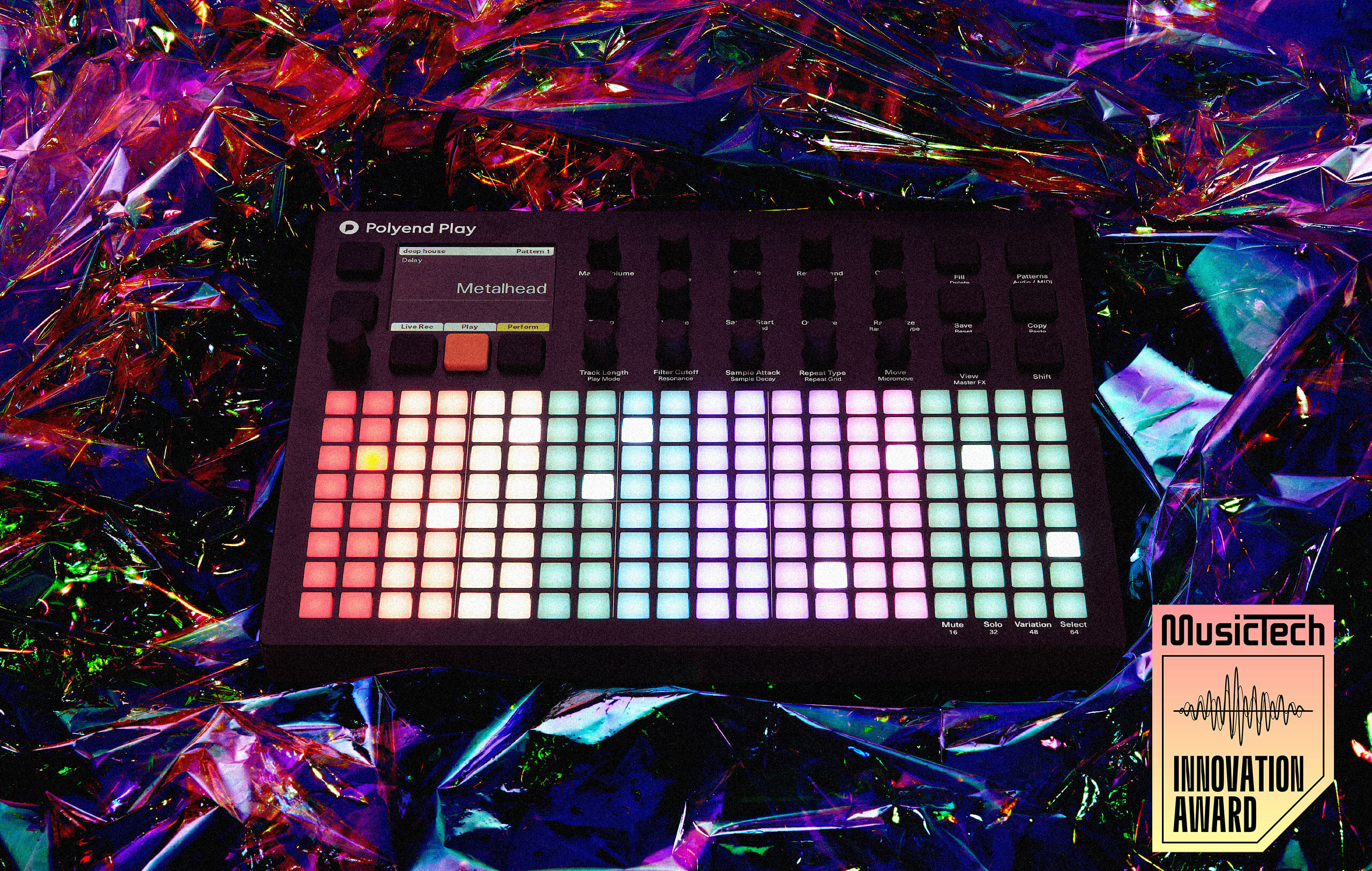 The Big Review: Polyend Play is a groovebox so fun you’ll wish you had two

This new creative studio centrepiece has its faults but could be an asset to your beatmaking and live performances.

Innovative live sets feel in demand right now. This month alone, a clip of British breakthrough act Fred Again… playing on a Native Instruments Maschine went viral, while UK house producer Elliot Adamson got “bored of DJ’ing” and decided to build a new live set in three days. There’s something about getting hands-on with your music that’s liberating for artists and is engaging for an audience. And Polish manufacturer Polyend is acutely aware of this.

Polyend’s Play is a fantastically fun groovebox that lets you sequence, shuffle and slice up your sounds. It’s certainly not limited to stage performances – it’s a creative goldmine for building musical ideas and can communicate with up to eight MIDI-equipped external instruments to act as a studio centrepiece. You’ll load sounds into the Play and harness the sequencer, effects engines and sample editing tools to manipulate your sounds.

The Play does have some serious limitations, however. But, as is often the case with music technology, you might be able to benefit from these restrictions in an artistic fashion.

We love the sleek black aesthetic that Polyend has opted for in its product range. The minimalist look of the Play is akin to the brand’s Tracker, released in 2020, both sporting a compact, lightweight and thin design. You’ll power it via USB-C, either with the power supply that Polyend provides, or with a laptop or power bank. This is ideal if you plan on making beats while you’re out and about – or casually laying on your sofa.

Most striking is the layout of the Play. 160 backlit buttons, in a grid of 8×20, allow you to sequence, perform, play, and manipulate the sounds. Such a number sounds daunting – and, at first, it is – but once you become accustomed to the workflow, you realise how effective this system is. Above the grid is the visual display, with five dedicated buttons and an endless rotary knob that you’ll use to navigate parameters, save and load projects, import samples, map MIDI CC, and much more.

15 touch-capacitive knobs sit beside the screen – which provides feedback for the primary and secondary functions of each knob (activated with the Shift button) – while six buttons sit on the right side of the Play and are used mostly for project management. This clean layout invites a unique way of navigating your ideas.

As there are no audio recording capabilities, the Play comes with a batch of pre-loaded sounds and demo projects on an SD card that are primed for a variety of genres. But if you’re eager to tinker with your own sample library, simply connect the SD card to your computer and drag files into the Play’s directory. Disappointingly, you can’t establish a connection via USB-C to drag-and-drop media, which is an oversight from Polyend. It can, however, send MIDI through USB-C.

Once you’ve sourced your inspiring palette, you’ll load up to 225 samples – or around six minutes of 44.1kHz / 16-bit samples – into a project’s Groove Pool. The Groove Pool can be organised by folder – for example, you can create a dedicated folder for all manner of hi-hats.

You can also load entire sample packs into a Groove Pool for swift browsing and clever use of the generative Fill function, which automatically (and impressively) creates sequences with the sounds in the sample pack. But this won’t necessarily work for all sample packs. You’ll have to follow Polyend’s guidelines to create a sample pack specifically for Play, such as:

Both means of sample importing work intuitively and have their advantages. Mostly, we avoided the use of creating sample packs and opted to manually create folders and designate samples, and this worked wonders for us.

Programming a one-shot sample, such as a kick drum, is a breeze. On the sequencing page, each row acts as an audio track with 16 steps per page, and a maximum of 64 steps per track. Simply use the Sample knob above the grid to select a sound from a folder and then place it on a step button. Hit the orange Play button under the screen to hear your song.

The four columns of pads at the end of the button grid (the green, 4×8 section) are functional, so can be used as mute, solo, and select tracks, plus use Variation. With Variation, you can effortlessly toggle an alternative sequence you’ve created for that track, and up to 16 variations can be made per track, per pattern. That’s a whopping 30,000 variations per project – not that you’d need such an incredible amount.

Sequencing a melodic sample is a joy. You can use the Sample Start knob and its secondary function, Sample End, to slice the sample to your desired length. Setting the end point before the start point will play the sound backwards. When you’ve determined the length, you can place it anywhere on the sequencer. You can change the properties of that step by holding it down and alter it using the knobs for parameters such as Filter Cutoff, Sample Attack, Reverb Send, Overdrive, Volume, Panning, Chance, Randomisation, and more. You can make use of the five master effects, too, which comprise various types of reverb, delay, saturation, limiters, and Sound – essentially a range of master EQ presets.

It’s a blast chopping up a sample in multiple ways per sequence. You can set a piano sample to play at different points for all 64 steps, should you desire. And you can create short passages that are reversed, processed and panned in different ways on various steps for an intriguing loop. Plus, as a track isn’t dictated by the instrument, like in a DAW, you can make intricate beats using only a few rows – such as placing various velocities of hi-hat, rim shots, and bells onto a track when crafting a drum‘n’bass groove.

Polyrhythms are easy to conjure with Play, thanks to each track sporting an independent step count from 1 to 64. It’s a pain to move around the various sequencer pages, though, which is a shame. To scroll through a track’s steps, select it and use the Move knob, which seems fine, but you can only move across by one step at a time. This is a hassle – it’d be much better to be able to scroll by page.

For more unpredictable beatmaking, you can deploy the excellent Randomise and Chance knobs, which allow you to define the parameters by which a sample plays – or doesn’t play. This can help you add a dynamic touch to your music by switching up which hi-hat plays on a beat, for instance. Speaking of dynamics, the onboard Limiter can be used to set up a sidechain compressor triggered by a specific track, which is a simply wonderful addition.

Happily, you can also automate all of the available parameters using Live Rec, activated with a button below the display. Live Rec will also let you overdub more samples into a track and you can decide whether to quantise your performance or not via the main menu.

The Perform page of Play is one of our favourite features. Here, the grid turns multicoloured and allows you to apply real-time effects to your tracks of choice. Along with filters, delays, reverbs and the like are repeat and loop effects that, while aren’t creative across all instruments, will help you swiftly bring drama to a performance. This is another area we can see producers getting clever with in their live sets.

If you have MIDI-equipped hardware in your studio, you can connect it to the Play via 3.5mm MIDI In and Out ports. Polyend provides you with a five-pin adapter but you’ll need a MIDI Thru hub or MIDI Thru gear to control multiple pieces of kit. The MIDI mode is magnificent, though. You can map parameters to the knobs and automate them, trigger chords per track, and sequence your MIDI gear.

Polyend Play has a serious edge on other grooveboxes and there are plenty more lovable features we’ve not mentioned here. Like producers taking Roland SP-404s, Akai MPCs and Native Instruments Maschines to the stage, we’d love to see how artists use the Polyend Play in a live setting. One gripe we have is that a sample will ring out when stopping the sequence, rather than completely cutting out like in a DAW – this could make for some awkward moments during a set.

Its limitations present themselves quickly, such as not being able to sample directly in and a lack of export options to develop your genius ideas – either by an output for each audio track or a native DAW export, for example. Polyend assures us that the latter will come soon, thankfully.

The asking price is slightly higher than one might expect to pay for a groovebox but we can confidently say that, if you love producing with samples, you’re unlikely to regret this purchase.

Still, we’re stunned by the hours of fun we’ve had simply toying with one sample and seeing how we can flip it in a novel fashion.

We only wish that we had two review units that we could hook up to a mixer to experiment with a new type of DJ and live set. And you may well wish the same.