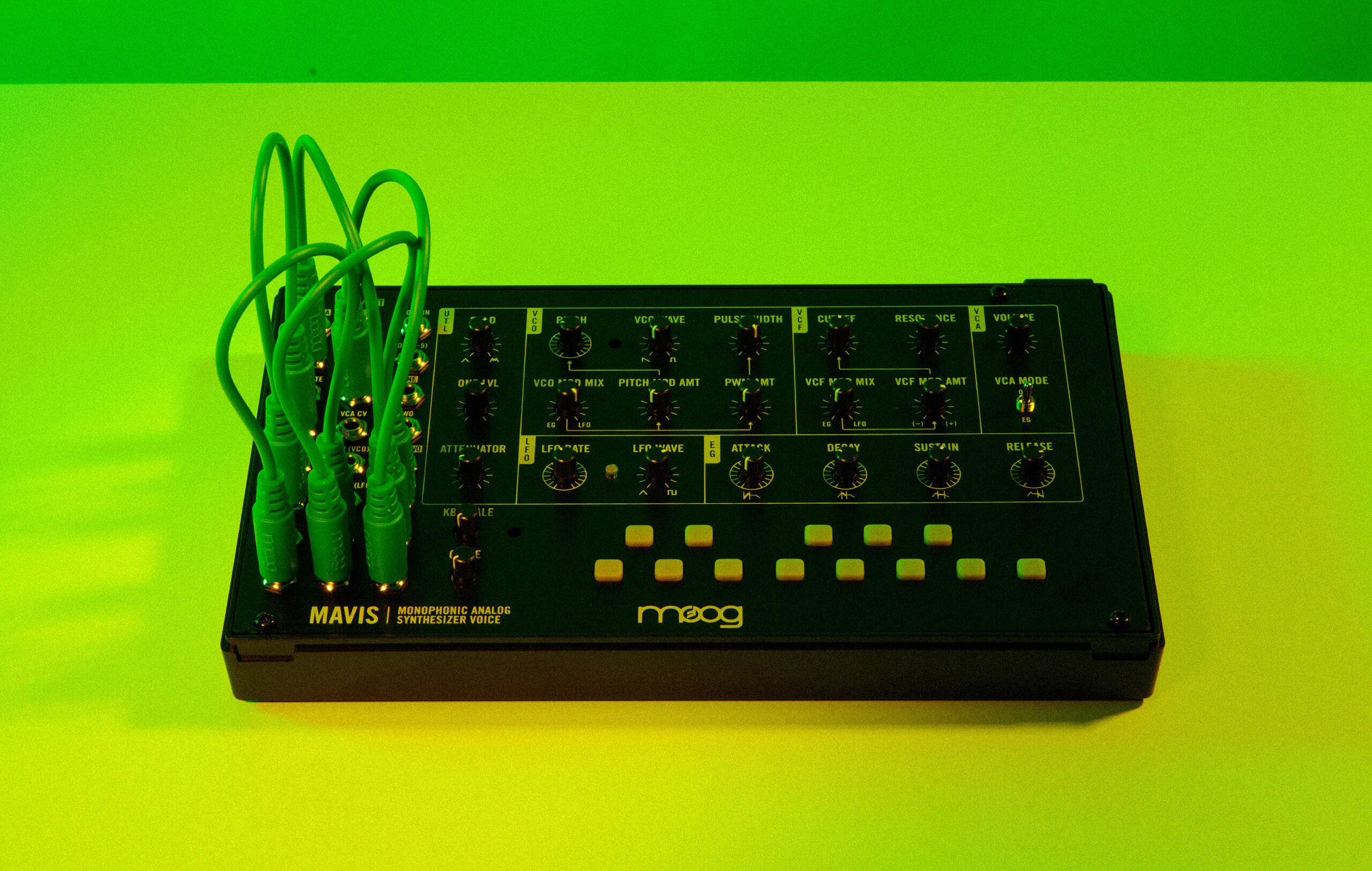 The Big Review: Moog strikes out West with Mavis

Moog Music introduces a new sibling for its Eurorack-mountable semi-modular synths. Does Mavis do the family name proud?

⊕ All the power you’d expect from a Moog oscillator, filter and envelope
⊕ Excellent-sounding wavefolder with huge potential for processing external audio
⊕ Approachable but flexible functionality and patchability, ideal for synthesists of all abilities
⊕ Solid build quality
⊕ Eurorack-mountable

Moog Music’s synthesizer range has never been smaller. Not in terms of choice – the spectrum of instruments currently in production is staggeringly wide – but in terms of the units themselves. The compact Mother-32, Subharmonicon and DFAM all proved near-instant hits, apparently precipitating Moog’s deep dive into the culture of desktop semi-modular synthesis, complete with educational resources, colourfully illustrative branding and something of a collect-’em-all approach; including the packaging of two or more together with a stand and accessories in semi-modular sets.

It follows, then, that the latest offering from Moog Music, Mavis, unquestionably leans into all of the above. It’s educational, it’s portable, it’s budget-friendly and it’s begging to pair with other hardware. The reasoning behind the semi-modular synth’s name isn’t explained by Moog but it’s certainly in keeping with the strong female-oriented naming of Moog’s other semi-modulars: Grandmother, Mother-32, Matriarch.

Mavis is billed as a solderless build-it-yourself kit but, in practice, this involves placing its faceplate onto a pre-assembled PCB and fitting it inside the sturdy chassis. So, DIY-phobics, you can relax.

A modest 44HP wide, Mavis consists of a single oscillator, variable between saw and square wave, an ADSR envelope and a classic 24db/octave Moog Ladder filter. There’s a single-octave miniature button keyboard with adjustable glide and scaling and a simple modulation matrix with a single LFO, variable between triangle and square wave. The pitch, pulse width and filter cutoff have knobs to blend and fade between the envelope and LFO as modulation sources, which is a nice touch. The LFO can also oscillate at audio rate so Mavis can also be played as a dual-oscillator synth.

There are significant echoes of Moog’s build-it-yourself Werkstatt-01 here, from the instrument’s size to its button keyboard. But Moog is clearly seeking to use Mavis to take Werkstatt’s concept into new territory. The Werkstatt, for example, was compatible with a CV Expander patch bay placed down its the right hand side; on the left side of Mavis panel is a built-in 24-point patch bay. The Werkstatt had a three-stage envelope; Mavis’ is four-stage. This is still a raw, scaled back Moog instrument – no beautiful, big filter cutoff knobs to be found here – but one that introduces just enough frills to the compact semi-modular format to make its mark.

At its most basic level, a scaled back Moog instrument it certainly can be, with the ability to be mounted into your Eurorack system to boot. No complaints there. One function that does set it apart, however, is the inclusion of Moog’s first ever diode wavefolder. As the canonical East Coast synthesis school, Moog including a circuit most associated with the Buchla 259 and West coast additive synthesis techniques is an intriguing move. Considering that Mavis also has a single VCO à la Make Noise’s 0-Coast, we wonder if Mavis signals a new chapter for Moog with inspiration coming from other synthesis schools.

As Moog’s VP of Engineering Steven Dunnington says in the literature included with the synth, “the basic philosophy behind Mavis was to develop an instrument with awesome sound, utility, simplicity, and patchability in mind to maximise its potential for creative musical uses and to expand the sonic vocabulary of Moog Music instruments.” The wavefolder, touted by Dunnington as a “novel wavefolder design that has a secret hidden feature”, adds a huge amount of sound-sculpting potential to the Mavis, not least when paired with its resonant Ladder filter or smooth pulse-width modulation.

The “secret hidden feature” is that the wavefolder can double up as an audio input to fold (or distort) incoming signals from elsewhere. It’s similar to the variable gain audio inputs found on other Moog instruments but a lot more interesting. The wavefolder is routed through the envelope and VCA so, in this respect, Mavis can become a powerful signal processor for other sounds in your setup as well as a voice in its own right. This, to say the least, is a huge asset.

Mavis has no five-pin MIDI input, unfortunately, so if you want to integrate it with an external keyboard or sequencer then it’ll need to output CV. The onboard keyboard is limited but useful for auditioning sounds and playing simple melodies. It’s also the perfect size to nestle some tactile playability into a Eurorack system. Mavis is playable completely unpatched, with its VCO normalled through the envelope and VCA. This means it’s an excellent and approachable introduction to the concept of synth patching for beginners while, for more experienced users, its inherent Moog-ness can be maintained to any degree while selectively controlling various parameters to subvert this.

Glide and Scale knobs also expand the keyboard’s functionality considerably, particularly Scale, which not only increases the keyboard’s range but also changes its intervals to open up some tangibly non-Western-sounding scales and kickstart melodic ideas in novel ways.

There’s also a handy VCA Mode switch, as found on the Werkstatt-01, that allows for toggling between envelope VCA control and leaving the VCA consistently high. This is useful for creating the kinds of powerful drones where Moog oscillators are bound to shine, or for processing external audio without needing to engage the envelope. This also helps to open up some creative playing options – using modulation to create rhythm, for example, or experimenting with extreme timbral shifts for dynamics.

Disappointingly, Mavis does not feature a CV sequencer. This would expand its standalone potential enormously and doesn’t feel like an unreasonable expectation, given the Mother-32’s use of its similar keyboard to double up as such. The keyboard has a CV output but no gate output on the patch bay, which would also open up an array of options, particularly when it comes to pairing Mavis with other gear.

Mavis’ patch bay offers plentiful options for some creative routing. It comes with a useful one-to-two mult and a sample and hold circuit – though a slightly unconventional one, hardwired to use the VCO as its voltage source and to the LFO as its clock. Considering the LFO is Mavis’ only onboard clock source, the mult is less a bonus and more an essential feature. Two assignable control circuits with corresponding knobs also increase Mavis’ patching scope: an attenuator complete with a +5V input jack and a simple two-channel mixer with inputs simply named One and Two, with a sole knob for One’s level and a One + Two output.

Moog’s tendency to stack all of an instrument’s patchpoints together in a grid is problematic. This is partly because it works against the important visual aspect of charting a connection from one section of an interface to another and, by extension, can easily get confusing when editing or retracing a patch. When working quickly with Mavis, it’s not always immediately clear whether the label for a particular point is above or below the socket, as well as which sockets are inputs and which are outputs. The way the patch points are ordered doesn’t feel particularly intuitive either. For example, the LFO rate input and LFO output are in very different areas of the bay, and while the three mult sockets are in a row along the bottom, the three sample and hold sockets are in a column up the middle.

Mavis has no preset memory, and while its included translucent cover is useful for transport, it’s not deep enough to accommodate patch cables left in the sockets. So, if you’re on the move, you’ll frustratingly have to unpatch and keep a pen and paper handy. Mavis comes with five paper overlays offering some basic voices to get beginners going (Detuned Dual Square, Folding Bass and so on), but it would perhaps have been more useful to include blank overlays instead of these for users to note down their own patches when on the move and leave patch suggestions as an online resource. Talking of online resources, there are plenty, including a substantial Mavis Exploration Patchbook, a patchbook by Moog aficionado Lisa Bella Donna and a downloadable blank patchsheet for user patches.

Mavis has its quirks, but it is most certainly a Moog synth. Its raw components are powerful and rich, and Moog’s decision to push the boat out a little has paid off. Its inclusion of a wavefolder is a stroke of class, expanding its palette considerably, and despite some design elements raising the occasional eyebrow, these float on top of a rock solid foundation: a truly excellent VCO, a legendary filter, a versatile LFO and an impeccably tuned ADSR envelope.

At its price, Mavis is a steal – arguably worth it for its external audio routing capability alone. Whether by itself on a tabletop or integrated into a Eurorack system, Mavis delivers a dose of classic Moog with a touch of something else entirely. If it is indeed the harbinger of a new chapter for Moog Music, the future may well be bright.